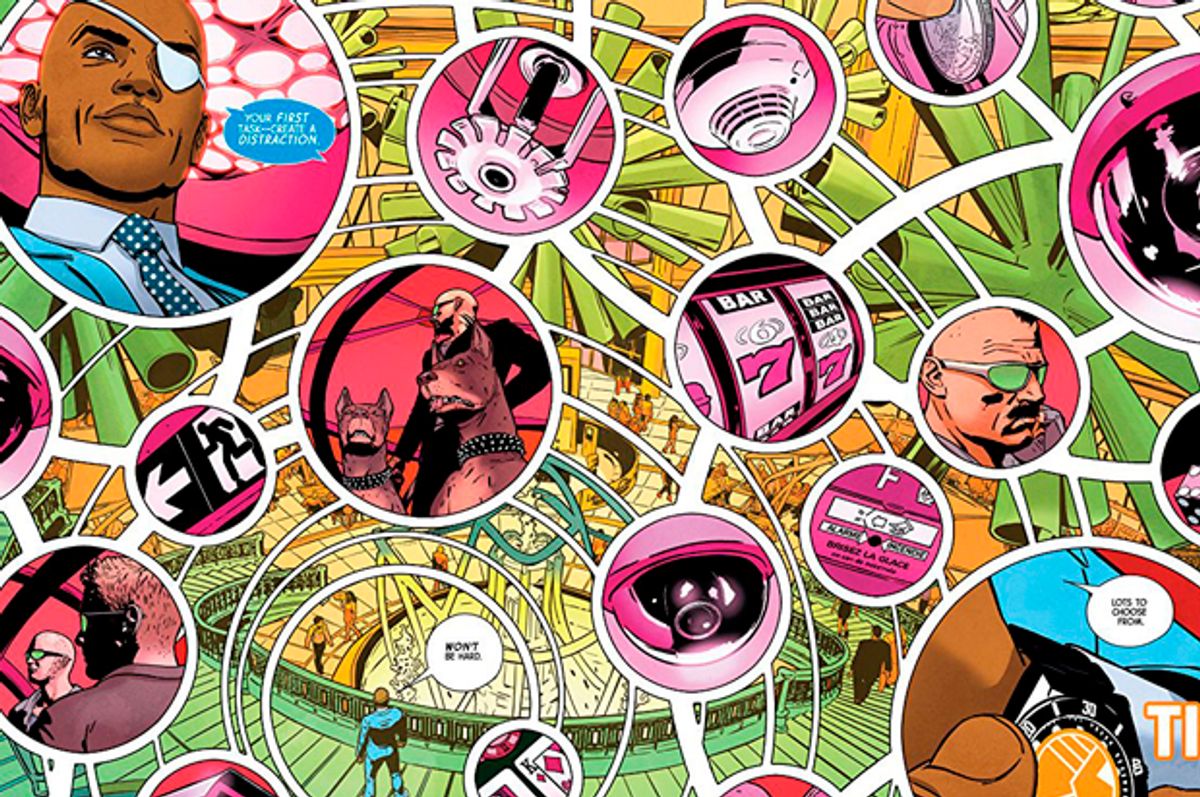 In terms of character development and artistic presentation, corporate superhero properties tend to stay fairly static over the years. Not Nick Fury.

Since debuting in “Sgt. Fury and His Howling Commandos” #1 in 1963 — by the prolific duo of Jack Kirby and Stan Lee — Fury has been an army sergeant, a spy, a replacement Watcher on the moon and Samuel L. Jackson. His most remarkable stories were written and illustrated by Jim Steranko, who brought a wicked design sense to comics that is finally being matched in a new Fury series.

With this comic, written by James Robinson and illustrated by ACO, now on stands, it's a good time to appreciate this versatile, badass character whose journey is even more wild and weird than Steranko's or ACO’s art.

There’s always been controversy over who created what when it comes to the creative partnership of writer Stan Lee and writer/artist Jack Kirby. They're often both credited with creating the Hulk, the Avengers, Thor, the Fantastic Four, Black Panther, Ant-Man, the X-Men and many, many more. But if any of those characters is close to 100 percent Kirby, it has to be Nick Fury, who shares Kirby’s love of cigars and was inspired by his experiences as a World War II veteran. As Kirby said in Mark Evanier’s “Kirby: King of Comics," “Nick Fury is how I wish others saw me.”

In 1966-67, writer-artist Jim Steranko redefined the character as a James Bond type via some of the most innovative art in comics to that point or since. Steranko started by filling out Kirby layouts, but soon ended up taking over full penciling, plotting, inking and scripting duties. Steranko mixed pop art, psychedelia and Kirbyesque power into a dazzling visual experience. These stories played on the popularity of James Bond but went beyond them, spilling over the page with a relentless energy, deep paranoia and constant misdirection (which might have been influenced by the multitalented Steranko’s work as an escape artist).

Over the years, Fury — later promoted to director of the spy organization S.H.I.E.L.D. — has been a strong presence in the Marvel Universe, mostly as a guest star. When a story needed an intelligence mastermind, creators reached for Fury. That said, he's had some solid solo runs in comics over the years.

One of the best was the 2012-13 series “Fury: My War Gone By,” written by Garth Ennis and illustrated by Goran Parlov. This series took an old, grizzled Fury away from superheroes and into the Cold War, showing his (and America’s) role in French Indochina, Cuba, Vietnam and Nicaragua. Like America, Fury is addicted to war. This devastating story is a clever use of the character and one of the best pieces of Cold War fiction in any genre.

Fury first became a black man modeled on Samuel L. Jackson in 2001, seven years before Jackson brought Fury to life in “Iron Man.” This new Fury debuted in Marvel’s Ultimate Universe, an alternate reality that allowed Marvel to reimagine its characters and mythos.

As Abraham Riesman puts it in an excellent Vulture article on “The Ultimates,” “Nick Fury, classically depicted as a white career soldier who charmingly barked orders from behind a cigar, was now a black survivor of off-the-books intrigue in the Gulf War who had become a megalomaniacal spymaster.” This Fury, similar to the one in the Avengers movies, summoned a team of super-people as they emerged around the world. Despite the changes, Fury remained grizzled, tough, pragmatic and cool.

The success of the Marvel movies and the mainstream acceptance of Jackson as Fury led to a reshuffling in the comics. In 2012, Marvel introduced Marcus Johnson, an Army Ranger who learned the original Fury was his father; Johnson’s real name was — you guessed it — Nick Fury Jr. This Fury was also modeled on Jackson, though much younger. In 2014, the old, white Fury was elbowed aside in the “Original Sin” event, leaving him as a replacement Watcher fulfilling cosmic duties on the moon (don’t ask). In 2015’s excellent “Secret Wars” event, Marvel merged its regular Universe (often called 616) and Ultimate Universes, writing out Ultimate Nick Fury. So, Nick Fury Jr. is now pretty much just Nick Fury.

This Fury hasn’t had much time in the spotlight, other than being co-lead in a terrific “Secret Avengers” series written by Ales Kot and illustrated by Michael Walsh. That series — much like other Kot series “Bucky Barnes: The Winter Soldier” and “Zero” — highlighted the pain of post-traumatic stress disorder, particularly through Phil Coulson, Fury’s best friend.

The 2017 “Nick Fury” series is the coming-out party for this character and a return to the late-'60s glory days. It embraces Fury’s superspy role and the boundless possibilities of the medium via art that may even out-Steranko Steranko. As in DC’s “Midnighter” series, ACO makes every page of “Nick Fury” gallery-worthy, with inventive page and panel designs that make you want to linger on the page forever.

The wild look of ACO’s art is heightened greatly by the colors of Rachelle Rosenberg. The bright, day-glo palette, heavy on bright pinks and purples, is stunningly beautiful. As ACO told Newsarama "we wanted to express a certain feeling of pop-art. To achieve this, the color was of vital importance, and in that sense I am very happy with the work of Rachelle Rosenberg. I've always thought that color in a comic works like the soundtrack in a movie. It sets the tone of the story without needing to pay much attention. Rachelle understood perfectly that the book needed to be bright, saturated and loud.” Like another recent Marvel series about a black protagonist — Genndy Tartakovsky’s “Cage”—“Nick Fury” is a visual feast.

Corporate characters, by all logic, should be meaningless tools for huge corporations to grab our money. But it doesn’t always work out that way. Creators such as Kirby, Steranko, Ennis and Parlov made the original Nick Fury a respectful, visceral portrait of a great yet flawed military man. Samuel L. Jackson’s unforgettable portrayal helped make Marvel more diverse on film and on the page. Artists such as Steranko and ACO have made Fury’s spy adventures more explosive than the best Bond movie.

The combined efforts of these creators have also told the story of America: from the simplicity of World War II to the nuances of the Cold War, all the way to the War on Terror and beyond. Every American conflict (and military approach) has had its own Nick Fury.