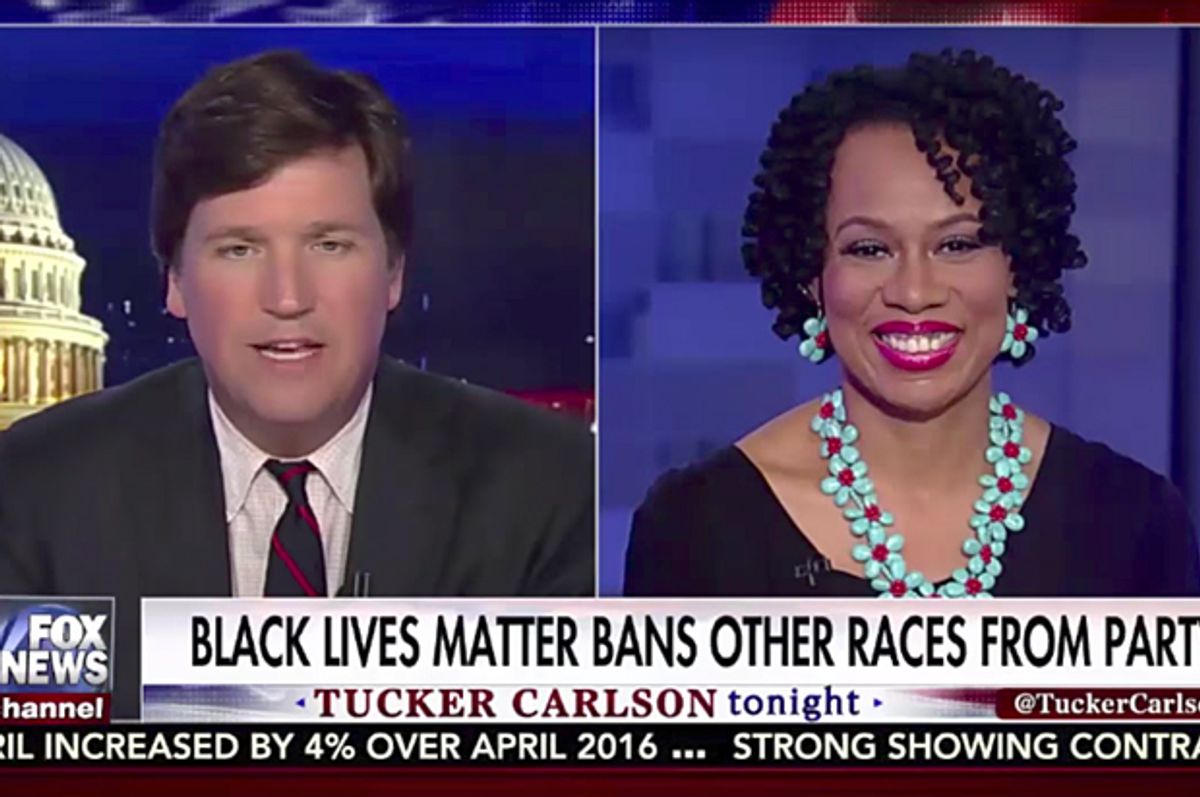 The right-wing campaign of concern over “suppression of speech” on college campuses is an elaborate exhibition of theater, using the stagecraft of liberal genuflection, to advance an anti-intellectual agenda and express resentment and hostility toward students, scholars and one of the last remaining bastions of free inquiry in the United States.

If any proof, beyond elementary logic, was necessary to demonstrate the transparently phony outrage of conservatives such as Sean Hannity and Laura Ingraham who have announced plans for a “massive free speech tour” of supposedly “liberal” universities while advocating for significant budget cuts to the institutions they claim to protect, Yale University and Essex County College have given observers an illuminative gift.

Right-wing commentators were quick to criticize Yale when a small group of students demanded punishment for a lecturer who defended Halloween costumes against charges of cultural appropriation, and for her husband, a professor and mentor, for coming to her intellectual aid. The couple voluntarily resigned from their respective positions in residential life, but they remain on the faculty.

Former Yale dean June Chu is not nearly as fortunate. After the discovery of Yelp reviews in which the academic derided a restaurant as fit only for “white trash” and ridiculed movie theater employees as “barely educated morons,” her Ivy League employer placed her on leave.

Shortly after Chu’s dismissal, Essex County College announced that it was permanently suspending Lisa Durden, a professor of communications. Durden’s employment-ending crime was her defense of Black Lives Matter campus events that did not allow the attendance of white students during an appearance on Tucker Carlson’s nightly Fox News program – an exercise of performed indignation with “outrageous” left-wing guests.

For several years conservatives, along with some liberal commentators, have offered melodramatic warnings to America that colleges are transforming into veritable gulags, where those who refuse to adhere to an increasingly rigid and severe standard of “political correctness” will face swift and harsh punishment.

A “liberal professor,” eager to get in on the act for Vox, wrote under a pseudonym to declare his own weakness and fragility: “My students sometimes scare me – particularly the liberal ones.”

I have taught at four universities, over a period of seven years, and I’ve never once felt frightened — annoyed, yes, even angry — but never afraid. I wonder how someone terrified of his students manages in life, and why he even continues to teach. He might want to apply for a position in a less threatening career, like corrections officer at the nearest prison.

After the ongoing faucet of tears and through all the shrieks of horror over the demolition of free speech in higher education, two women of color have lost their jobs over speech — speech made outside the confines and duties of university employment and life — to little protest or outrage. Fox News is not keeping a nightly watch on the “free speech wars” demanding that Durden and Chu receive immediate reinstatement. The Atlantic has not yet published a maudlin “think piece” about the “chilling effect” these firings will have on other professors who broadcast speech, offensive or not, on social media or television. No “liberal professor” has announced that he is “sometimes scared of his administrators.”

Perhaps, because of their race and gender, or because the violation of Durden and Chu’s free speech rights and academic freedom does not offer the excitement of casting unaware 19-year-olds as comic book villains, few seem to care when actual people are actually punished for using the “wrong” words.

Stephen Davis, an administrator at Yale, called Chu’s Yelp posts “reprehensible.” Whether or not Chu’s reviews qualify for that description, shouldn’t conservatives who decry “political correctness” condemn Yale with the same zeal they used to insult obnoxious students?

Tucker Carlson truthfully reminded his audience that he did not advocate for the firing of Durden, but rather than claim her dismissal as a casualty in the “campus speech wars,” he simply added that it was “nuts” that she once taught students. It seems rather unlikely that Carlson, who is not a psychiatrist, ever audited one of Durden’s classes.

The penalization of Durden and Chu for inflammatory speech falls into a troubling pattern of university hostility toward controversial communication. While cable news drama queens and “serious” columnists alike play masquerade with phantoms of Stalinist students, real people are losing their jobs in academia, not because they are victims of left-wing political correctness, but because they violate conservative codes against free expression.

In 2005, the University of Colorado fired Ward Churchill, an ethnic studies professor, for “academic misconduct” after Fox News spotlighted an essay he wrote disparaging some of the victims of the 9/11 terrorist attack. Churchill filed a wrongful termination lawsuit, and a jury decided that he had indeed faced undue penalty for his controversial article. They awarded Churchill $1 million, but a District Court judge later vacated the award during an appeals case.

The University of Illinois offered a faculty position to an English professor, Steven Salaita, but soon withdrew it after discovering that he tweeted several harshly critical remarks against Israel. Salaita also sued and won but, unlike Churchill, has not faced appeal.

Larycia Hawkins, the first black woman to earn tenure at the evangelical Christian university Wheaton College, lost her position after wearing a hijab into the classroom.

Commentators treated Mount Holyoke’s cancellation of "The Vagina Monologues," amid student protest over its “lack of inclusion” of trans stories, as the apocalypse, but never bothered to learn or mention that administrators at Catholic universities, citing their own theology, have prohibited the same play from being staged 22 times.

Meanwhile, the state of Wisconsin is on the verge of passing a bill that would permit the University of Wisconsin to suspend students who “disrupt” campus speakers.

After the surreal election of Donald Trump, the right-wing organization Turning Point launched its loathsome project “Professor Watch List.” According to Turning Point, its mission is to “expose and document professors who advance leftist propaganda.” The group claims that it has no intention of suppressing free speech, but no identifiable purpose for its McCarthyite ambition exists outside the intimidation of left-leaning college instructors.

Whenever a reductive debate about “free speech” on college campuses begins, a predictable and boring analyst will make an attempt at profundity by “pointing out,” as if everyone hadn't heard it a hundred times already, that in the 1960s it was liberals at Berkeley, and elsewhere, who defended free speech. “Now, they are the ones against it,” the pundit will proclaim with an emphatic and self-satisfied tone of voice.

The pattern of punishment for controversial professors, along with the right-wing campaigns of censorship, suppression and intimidation, prove that, no, the story has not changed in a gleefully ironic way. The enemies of free speech and dissent on college campuses are still apolitical and cowardly administrators, and conservative ideologues hoping to control campus culture.