Autism and the workplace: Adults with autism are the fastest growing group among the neurodiverse workforces 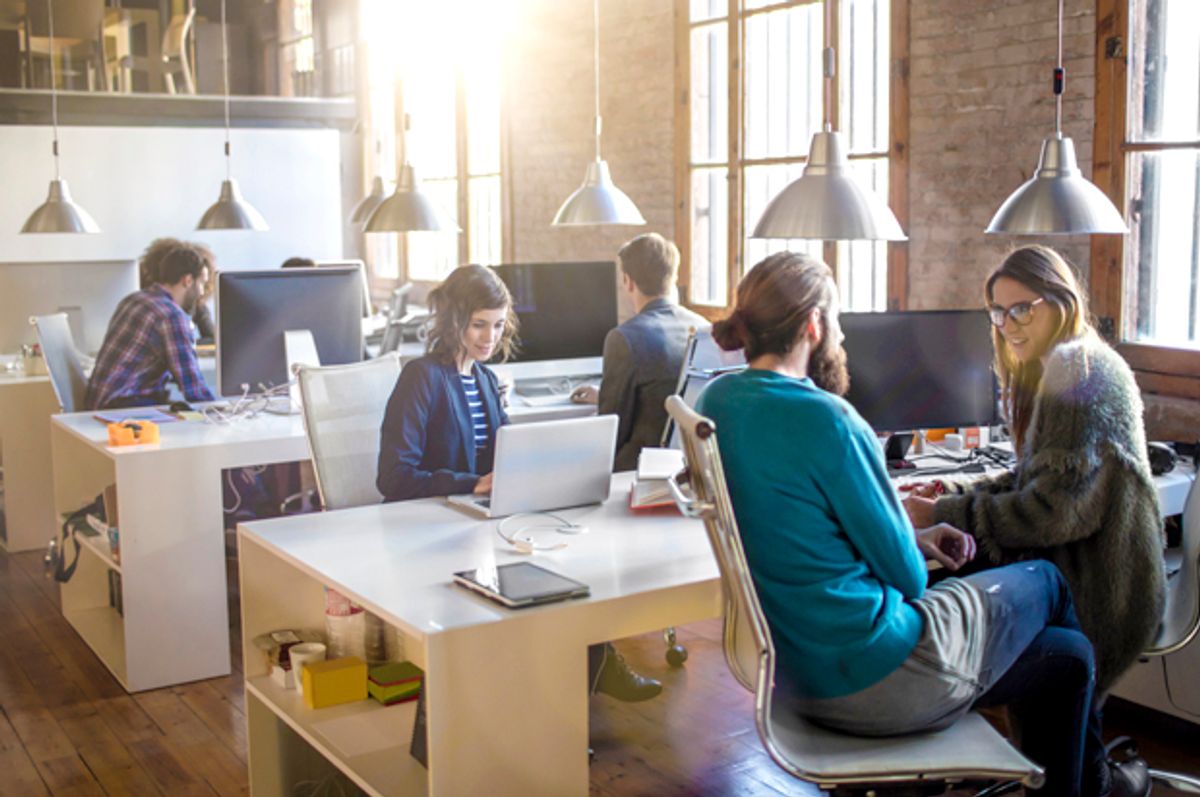 Young creative business people working in the office late in the afternoon. (Getty/xavierarnau)
--

This book is about building a better structure of employment for adults with autism. At the start, we should say that while we hope this book finds an audience in the autism community, we believe it also speaks to a wider community of workers. Our focus is on autism employment. But autism is a proxy for other neurodiverse workforces. Further, as we argue throughout the book, many of the employment challenges faced by adults with autism reflect the employment challenges most workers will face in our highly competitive and rapidly evolving job world.

Adults with autism are the fastest growing group among the neurodiverse workforces. Yet, the high numbers of persons on the disability rolls, the high unemployment and underemployment rates, and the difficulties of navigating and competing in the job world are characteristics of these other workforces, just as they are of the autism workforce. Additionally, the employment strategies for the autism workforce—the job search and networking techniques, identifying opportunities in the different industry sectors and occupations, the craft ethos and the retraining ethos—are equally relevant to these other neurodiverse workforces. Indeed, in these employment strategies lie greater effectiveness in navigating the job world for all workers.

Increasingly, the public policy questions linked to the high unemployment among the autism workforce also are policy questions applicable to the general population. How much more costly is it to find employment for adults with autism than to maintain these adults on government benefit rolls—as is largely being done today—and what are the benefits? How much can government operated or funded programs increase employment and what should these programs look like? What is the role of extra-governmental associations, and how can these associations best be structured?

I (Michael Bernick) first entered the job training world in 1979, as a volunteer with a community job training agency, the San Francisco Renaissance Center, and later spent five years in the 1980s as director of Renaissance. In the late 1990s and early 2000s, I served as director of the California state labor department, the Employment Development Department, where I first became involved with placement programs for adults with autism. Since leaving EDD in 2004, I have continued this involvement.

Autism has exploded into public consciousness during the past decade, spawning hundreds of blogs, websites, articles, and books. Though most of these books focus on early education and intervention or K–12 education, increasingly books are appearing on  autism employment. Written usually by vocational counselors or job coaches, these book usually do offer good advice on such job search strategies as identifying job openings, using job boards, getting in the door, networking. These are important topics and we address them in a section on job search skills and the role of the autism job coach.

This book differs from others on autism employment in addressing further the most effective collective employment efforts, rooted in an understanding of the evolution of the job world in the United States and the opportunities being created. We examine autism employment relating to the technology sector, the rise of the Internet commerce and social media economy, and the resilience of the non-tech, practical economy. We also address two major job dynamics that go across sectors and occupations and their meaning for autism employment: the heightened competition for most jobs; and the breakdown of full-time employment and rise of project-based, contingent, and part-time employment.

Getting a job was a challenge when I started in job training in 1979. It is significantly more difficult today. Most adults with autism will seek full-time employment with a stable company, as they should; and fortunately there are many jobs still out there that fit this category. Further, there is a small but growing number of employers who affirmatively seek out workers with autism (often because of a family tie). But for adults with autism, as for all workers, the effort needed to land a job will be far greater than in previous decades. They and their support teams will need to utilize a number of the job search strategies and also strategies of on-going skills upgrading, retraining, and lifelong learning.

We may have reached a tipping point in achieving fuller employment for adults with autism, due to the coming together of the demographics of autism, the movement toward inclusion, and the out-of-control growth of government disability benefit programs. But it will take effort to translate these social forces into job placements. A part of this effort will be through government,  specifically government-funded projects. A larger part will be through the extra-governmental autism community efforts that are prevalent today and have the capacity to expand.

This book arises from an essay that first appeared in Zócalo Public Square, which attracted considerable interest in our Autism Job Club.

In deciding to develop the essay into a book, I turned to Richard Holden, with whom I had worked at EDD (he was the EDD labor market research director) and who in 2004 became the regional commissioner of the Bureau of Labor Statistics (BLS). Richard is one of the most knowledgeable labor market specialists in the United States. The book is written mainly in my voice, as someone involved with autism employment on a local and personal level. But its ideas and strategies are informed by Richard’s research and experience. It has been a true partnership.

I joined the autism community in 1991, when my son William was diagnosed with autism. When he was younger, I wrote at times about his behaviors and struggles for inclusion. As he got into his teens, I stopped writing about him, mainly for privacy reasons.

His ongoing employment search is included in Chapter 5. Privacy reasons led me to omit certain details and experiences. However, I felt it was important to include at least a part of his story, since it is the one that I know best and since it also illustrates the challenge ahead for much of our autism community. The literature on autism employment often refers to main impediments like the lack of social skills or eye contact or challenges posed by the interview process. In most cases, the obstacles are more formidable than these impediments—even as they are conquerable.

At a number of points in this book, reference is made to “persons with disabilities.” This is the term used by the Bureau of Labor Statistics in data collection and often by other researchers and practitioners. It includes adults with autism along with adults with other neurodiverse conditions and with physical conditions (hard of hearing, loss of sight, wheelchair use).

We emphasize from the outset that we use this term reluctantly. It is a term that emphasizes limitations, rather than strengths, and that invites inappropriate condescension and pity. Most of all, it is a term without true meaning. All workers have limitations and strengths in work tasks; all of us perform different tasks with different levels of competence.

Within the autism and neurodiverse community, the use of other more accurate terms is spreading, and employment groups are arising with names such as Expandability and Positive Resource Center. Our hope is that the phrase “workers with disabilities” will go the way of other previous terms (i.e. “handicapped,” “challenged”) that we now regard as outdated.