"GLOW" wrestles with the particular pain of friendship divorce

As much as the series is about female solidarity, it's also about the sometimes brutal dynamics of friendships 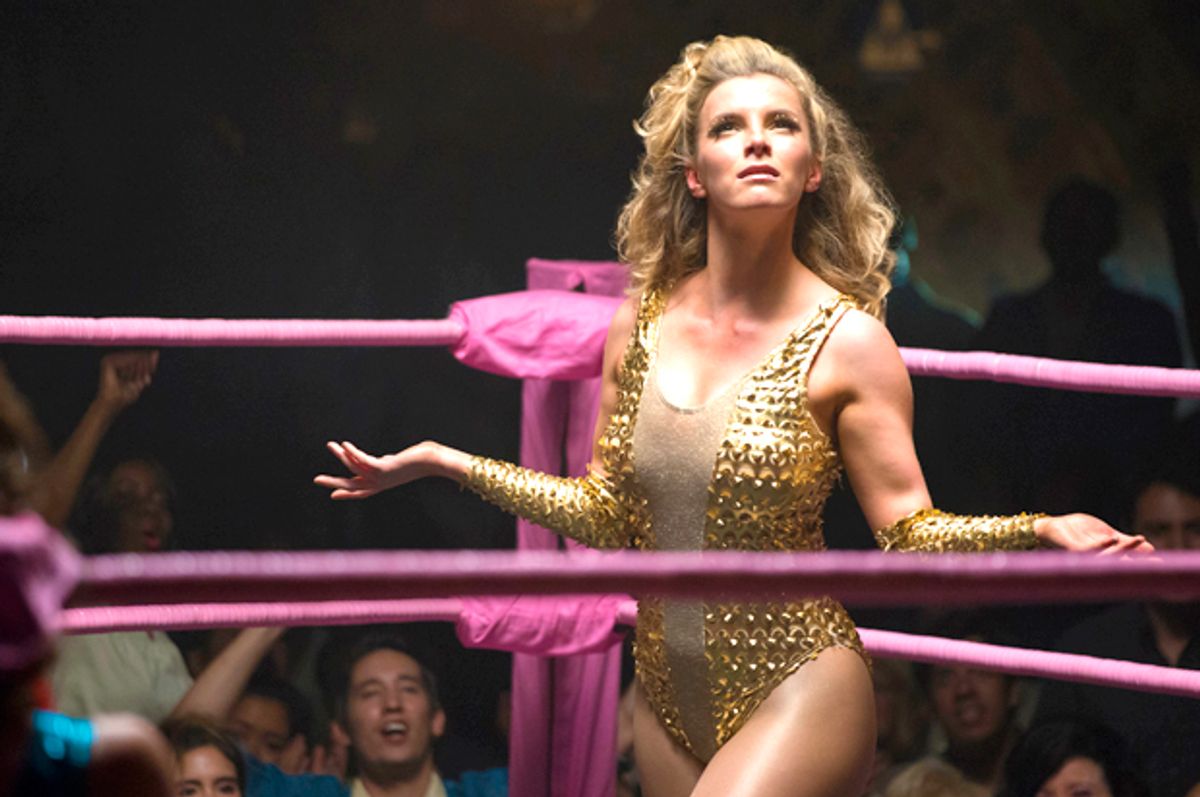 Note to readers: This article discusses a major subplot in the first season of “GLOW” as well as details about other series. Spoilers ahead.

I’ve been happily married to the same person for nearly two decades. We met in college, tied the knot a few years after graduation and have been together ever since.

During this same time span I’ve also been divorced several times. Not in a way any court would recognize, mind you. Legal records of these friendships ending don’t exist. But the feeling of divorce, such as it is, is real. People once considered to be among my closest confidantes aren’t in my life anymore. In the immediate wake of these rifts, their absence was palpable.

Breaking up with a best friend is one of those harrowing experiences that people go through without much assistance from the self-help publishing industry or support groups. As losses go, it doesn’t rate on the same cataclysmic level of tragedy as death or the end of a marriage. Depending on the circumstances, though, it can be just as gutting. One person tends to get custody of the shared social circle, because although none of your mutual acquaintances want to take sides nearly all of them usually do. That leaves nobody to vent to, no one to sit with you to remind you that you’re not alone.

Because that person – your person – is gone. Your business is finished. That’s that. What I was left with was the surrogate companionship offered by TV, and as I recall, that left me wanting. Television is full of series celebrating friendships, especially those shared by women. At times it felt like prime time itself was thumbing its nose at my loneliness in the same way that jilted lovers notice there’s nothing on the radio but love songs.

“GLOW” and its unconventional celebration of sisterhood would have been helpful back then. In this half-hour Netflix series inspired by the 1980s entertainment franchise known as Gorgeous Ladies of Wrestling, none of the women who make the cut have any previous experience in the ring (although one cast member, Kia Stevens, is a legitimate pro), and their lives probably would not have merged otherwise.

As they learn how to flip each other and bounce off the ropes without breaking bones, they also figure out how to trust and respect one another. A similar dynamic informs “Orange Is the New Black,” which “GLOW” co-creator Carly Mensch works on with fellow executive producers Jenji Kohan and Tara Herrmann, in that dissimilar personalities are thrown together in a small space and tasked to coexist peacefully.

In a sense, “Orange” and “GLOW' are unconventional versions of workplace comedies featuring women whose fortunes are dependent on cooperation rather than fostering any affection for one another. (The dramedy’s other creator Liz Flahive is a veteran of “Nurse Jackie,” another workplace-focused show.) For the women of "GLOW," succeeding at their craft means making a show that will sell, which could lead to fame and viable careers — or, barring that, a few paychecks that don’t bounce.

The remarkable part of “GLOW” isn’t the story of the team itself, but that of Ruth Wilder (Alison Brie) and Debbie Eagan (Betty Gilpin). Debbie’s hatred for Ruth is a noxious weed; it’s a loathing that sprang up overnight, snarled its way deeply into the soil and is determined to hang on. Her brand of detestation is the kind that only an ex-bestie can nurse and sustain. Ruth used to be her closest friend.

A person gets the sense that Ruth and Debbie started out in the same place. But as the series begins, we learn that Debbie is a former soap opera star who felt trapped in a substandard storyline and traded in her gig on “Paradise Cove” for family life in the 'burbs.

Ruth remains unsuccessful in pursuit of an acting career, despite her slavish devotion of the dramatic craft. All the method lessons in the world don’t save her from being, as one casting director tells her, the girl they bring in to show directors who claim to want a “real” person that they don’t actually want the thing they think they want.

Debbie is blonde, buxom, a new mother to an infant son and living in a pristine house in Pasadena. Ruth has $83 in her bank account and a ratty apartment. Debbie wonders aloud why Ruth never visits her. We get the answer later in the same episode: Ruth is sleeping with Debbie’s invalidating jerk of a husband.

When Debbie finds this out, she tears into the gym where the gorgeous ladies are wrestling, and like a Valkyrie with a vendetta, hands off her baby and jumps into the ring to kick Ruth’s ass. In that moment, two stars are born. The struggling B-movie director running the show, Sam Sylvia (Marc Maron), doesn’t want Ruth as a solo act. But with Debbie, Ruth becomes the magic ingredient for success – the “heel” to her ex-friend’s “face.”

As often as television series cement themselves around bonded women, one would think that more series would have explored the craggy turmoil of the female breakup. Sure, female characters fight; plug “Sex and the City” and Carrie and Miranda into YouTube’s search field, and you’ll encounter a long list of all the times those two have tangled. Every TV duo has spats, because perfect harmony isn’t realistic. Leslie Knope and Ann Perkins had their disagreements on “Parks and Recreation.” Cristina Yang and Meredith Grey tangled at times on “Grey’s Anatomy.” “Broad City,” “Girls,” even “Golden Girls” featured episodes where some of the women were at odds with others.

Eventually nearly everyone reaches across the divide and clasps hands again; otherwise the television formula of friendship’s resilience would be violated.

The flipside of sisterhood, as seen on TV, highlights a toxicity supposedly unique to womankind and the creativity we employ when it comes to eating our own. Freeform recently aired the series finale of “Pretty Little Liars,” revealing the identity of “Uber A” (also known as "A.D."), the latest in a string of manipulative all-seeing, all-knowing entities who organized any number of tortures and traps meant to ensnare the show’s central quintet. Ultimately the show revealed that the creepy texts the women received were coming from inside the house, so to speak.

Actual female friendship traverses these two spaces and is frequently afflicted by imbalances resembling Ruth’s and Debbie’s. "Girlfriends" is one of the few series that explores that angle by continually testing (and eventually breaking) the bond between childhood intimates Toni and Joan. Their angry split at the end of the show's sixth season, when Joan fails Toni one too many times, echoes throughout its seventh.

“Absolutely Fabulous” even has an episode that illustrates the lopsidedness of some relationships, in which Patsy Stone explains that the most lasting pairs resemble racehorses and donkeys. Friends like Patsy are expected to strut, while the Edina Monsoons of the world are tasked to share a stall with these prize thoroughbreds and keep them contented.

But the "heel"-and-"face" formula makes more sense in the friend-breakup framework, because in reality the roles switch back and forth – and as “GLOW” eventually shows us, those designations are more forgiving than a person might think.

Life, and Sam, designate Ruth to be the “heel,” but as Sam point out, the devil gets all the best lines. In a scene that takes place at a charity fundraiser, Ruth makes a confession masquerading as a testimonial that her betrayal was a thoughtless act that sprang out of a deep well of resentment that she didn’t even know she was harboring. And for a split second, we get it – Debbie’s also the "heel." In the typhoon of rage resulting from Ruth’s action, we may have failed see that maybe Debbie was too self-involved to notice that Ruth was collapsing under the weight of stifling desperation. When Ruth needed support, Debbie wasn't there for her.

Being the “heel” isn't necessarily a bad thing, either, because as a male pro-wrestler named Steel Horse explains in one episode, the “heel” makes the “face.” He credits his wrestling partner for making him look good for years, and he is also quick to point out that they’re not friends.

“We don’t like each other, but we make each other better,” he explains. “The shit in the ring, that’s just entertainment. But there’s got to be something that’s real. That’s what makes it work.”

Maybe that’s the secret to learning how to be with people who break your heart. Some divorced couples are able to do that, acknowledging their roles as former keepers of each other's life history. People we used to love still hold the keys to doorways inside of us, even if we’ve changed the locks or they’ve rusted shut. Debbie and Ruth are figuring out that there’s value in stepping into that ring and taking different corners than they occupied before. They have an incentive to figure out how to make each other better without actually making it all better, and by the end of the first season they do.

Being what they once were to each other, however, is impossible. One of the saddest moments happens at a fundraising event, when they fall into a natural conversation and forget for a nanosecond that they can’t stand each other. Then it hits them: Ruth’s smile dissolves, and Debbie’s twists in anger, then hollow despair.

“Sometimes I’m so sad you took away the option of us ever being able to have a normal fucking conversation,” Debbie tearfully snarls.

Eventually Ruth and Debbie face off in a title bout. Their cold war manifests as a spectacle, with Ruth portraying a Soviet-era villain and Debbie playing the all-American heroine. Debbie climbs to the top rope of the ring, takes flight and lands right on Ruth – just as they rehearsed. Ruth goes down hard, but she's smiling and congratulates her opponent. They both know it looks fantastic. Debbie wins the crown, and she gives good face. It’s a triumphant scene, and it couldn’t have happened without the firm support of a devoted ex-best friend. There’s an optimistic message in that.