Obamacare was a historic accomplishment. But single-payer or a "robust" public option are now achievable goals 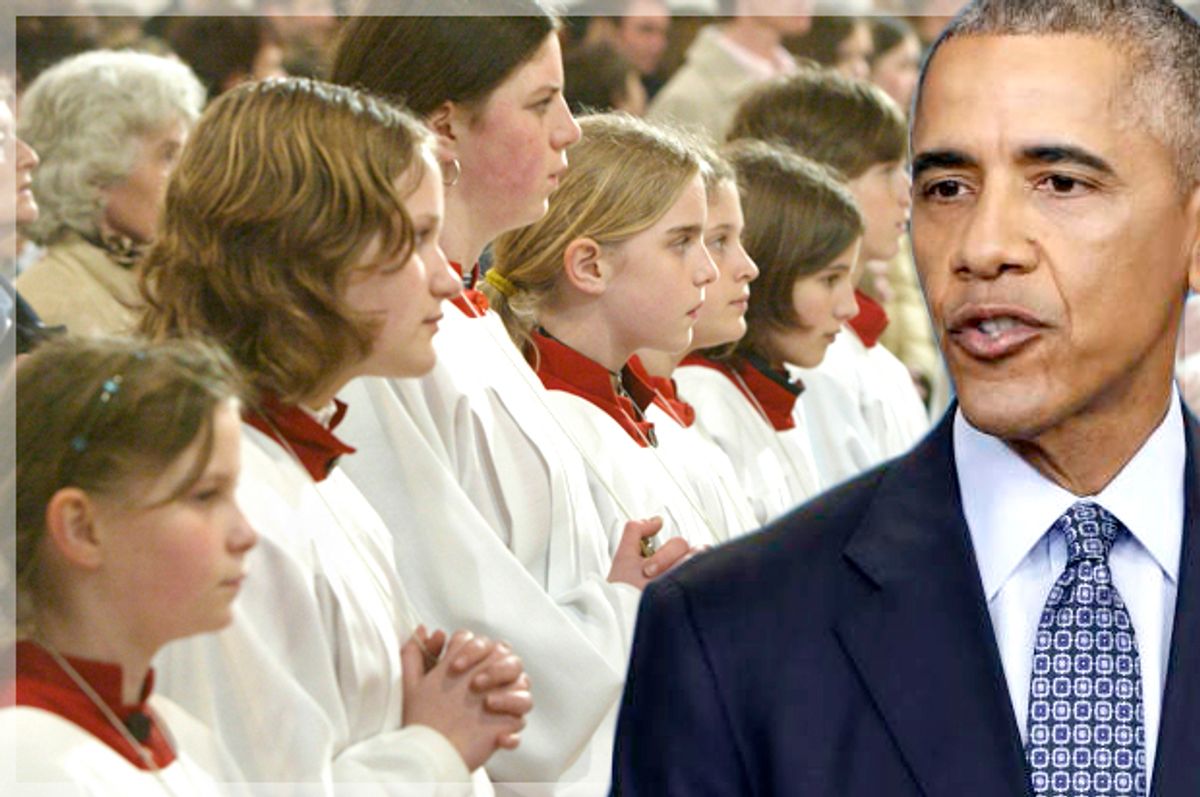 I’ve spent my life in politics, and the health care bill Mitch McConnell appears so desperate to revive is the single worst piece of legislation I’ve ever read. I say "appears" because I still can’t quite believe he wants to pass it. Its actual enactment would threaten his Senate majority as surely as it would the health of tens of millions of Americans. McConnell’s judgment is so clouded by partisanship and ideology one can easily see how he’d be blind to the bill’s moral dimensions. What’s harder to accept is that so sly a political fox wouldn’t sniff the enormous risk.

As is their custom, Democrats are doing all they can to help him reduce that risk. Hell-bent on proving they can beat something with nothing, they offer criticism but no alternative. Their one tangible vow is to save Obamacare, not fix it. They studiously avoid telling us how they’d do either. This approach has the advantage of allowing even the most corporatist Democrats to stage scripted protests; when nobody asks what anybody’s for, any street-fighting man can be a member of "the resistance."

This fight feels like a reprise of the Democrats' 2016 presidential campaign, heavy on moralizing, light on detail. Now as then, the words Democrats live by -- "Why take a chance?" and "Don’t scare the donors" — leave them precious little to say. Sixty percent of Americans favor single-payer health care. Zero percent of Democratic leaders in Congress stand with them. The only other practical way to cut costs is a public option. Democrats only whisper its name. Why risk getting lost in the policy weeds or ruffling the feathers of their sometime allies in the insurance industry?

What they do instead is what Bill Clinton guru Dick Morris called "triangulation." Democrats claim to hate Morris, but 20 years later still crib from his playbook. The idea is to seize the center-right and drive Republicans to the far right, so Democrats soft-pedal even a public option and train their sights on the richest Republican targets: a proposal to let insurers go back to denying coverage based on prior medical conditions, and one to slash Medicaid to finance another massive tax cut for plutocrats. Democrats talk of little else.

Clever, but what if Republicans figure out that to enact such policies would be covert suicide? What if they drop the tax cut and stretch out the Medicaid cuts to make them seem less draconian? Or ban insurers from denying coverage, but let them charge exorbitant prices for it? We may know soon. McConnell’s trying to do just that. It’s not inconceivable he’ll round up the 50 votes he needs. What then?

Republicans will have co-opted every Democratic talking point without adopting any Democratic policy they didn’t have to swallow just to pull their own caucuses together and save their own skins. The top 1 percent won’t get a windfall right away, but they’ll do fine, while millions of the poor and the middle class will be denied what all other developed countries regard as a basic human right. What will Democrats say? What they say now, I’d expect: Obamacare is good. Republicans are bad. Trump’s a liar and a fool. It’s not enough.

It doesn’t help in this fight that Democrats have retained the services of Nancy Pelosi and Chuck Schumer. Pelosi, once a pretty good speaker, is now a very bad minority leader. It’s a job that requires a firm grasp of policy and the ability to live off the land, neither of which she has. Like Pelosi, Schumer rose by raising money from the rich and doling it out to colleagues. At heart a tactician, he’s better at explaining how a policy benefits his party than how it may benefit the public. His deep ties to Wall Street subvert the party’s core values, identity and mission.

Pelosi and Schumer bleat on about "bipartisan legislative fixes" and challenge McConnell to "come to the table." To discuss what? How many elderly and disabled to throw off Medicaid? They see the bipartisanship riff as a harmless pander, but it fosters a false equivalency and gives Republicans much-needed cover. There won’t be any bipartisan negotiation. Calling for one only makes GOP extremists look respectable. Fixing health care means moving in a whole other direction. Why waste time pretending otherwise?

Democrats spend lots of time "defending Obama’s legacy." I suppose it’s unavoidable. But Obamacare doesn’t need to be defended. It needs to be fixed, and not just tweaked. We start with a strategic choice: Go direct to single-payer, or look first to a public option? As I know a bit about the latter, I’ll take a stab at framing the issue.

Twenty-six years ago, I proposed what I think was the first public option introduced in a legislative chamber in America. I’d just been elected Connecticut state comptroller and was the final signatory on the state employee health care contract. Negotiations with insurers were coming up and I was trying to get up to speed. Reading the plan, I saw how good it was and wondered if there were a way to open it up to the public. I found people in Connecticut and other states mulling over similar ideas, but nowhere was a program underway. I almost flinched. I was new to the job. The insurance industry, a local behemoth, wouldn’t be happy.

But the idea, if enacted, could transform the marketplace and it had an irresistible simplicity. We’d open the state-employee plan to small business, the self-employed, nonprofits, municipalities and municipal retirees. The program would be mandatory for municipalities and their retirees but voluntary for everyone else. If you liked it you could stay; if not, you could go right back to getting gouged in the individual market. Everyone paid their own way, so state taxpayers were off the hook. In fact, the state saved money, first due to lower per-capita overhead costs and then to lower prices due to increased market clout. In the fight over Obamacare, analyses by the Office of Management and Budget, the Congressional Budget Office and staff of the Bowles-Simpson Commission all found the same thing. Having government provide a public option lowers government’s own cost by a whole lot.

The big winners were those refugees from the individual market, small businesses and the self-employed. They often paid double what big corporate or government buyers paid and for worse coverage. Insurers said it was because they got sicker and it cost more to solicit and administer their business, but wouldn’t divulge data to back up the claim. I soon realized the industry was lying. Small businesses pay more for insurance for the same reason groceries cost more in inner cities; they had no market clout of their own. Our initial survey was startling. By lending them our clout we could cut their health care costs by a quarter to a third. That’s how much rent our antiquated, parasitic insurance industry was extracting from them.

The president of the Connecticut State Senate was my then-rival and now good friend John Larson, today a leader in Congress. He loved the idea and introduced the bill. It passed the Senate. The uproar from the industry was instantaneous and deafening. Angry men in expensive suits crawled the Capitol. The bill died in the House. It was reintroduced every year for 20 years, but never passed.

In 2008, candidate Barack Obama backed a public option and opposed a mandate that would force people to purchase insurance. He observed drily, and correctly, that the main reason most people don’t buy health care is because they can’t afford it. His chief primary opponent, Hillary Clinton, promised the opposite: a mandate but no public option. Obama made other related promises, among them that he’d allow Medicare to negotiate drug prices. He even vowed to let C-SPAN cameras into heretofore secret health care negotiations.

In office, Obama reversed himself. In early 2009, in meetings to which he forgot to invite C-SPAN, he made private pacts with leaders of the insurance and drug industries. He dropped negotiated drug prices and the public option, and picked up Clinton’s mandate. Experts said he needed it to pay for the whole thing. But it also guaranteed insurers permanent, expanded control of the "market." According to his own analysts, he thus passed on the two greatest sources of savings in his entire plan.

The fatal flaw of the Affordable Care Act is that it costs too much. Early on in the debate over the bill, we heard the novel phrase "bending the cost curve," a sure sign the White House had given up on actually cutting costs. Those hardest hit were the very small businesses and self-employed the public option was meant to serve. When the law took effect in 2014, a single person previously insured and earning $46,000 a year got no public subsidy but saw her premiums, deductibles and copays soar. Many lost what coverage they had, and paid a fine to boot. When they realized what had been done to them, they didn’t need Fox News to rile them up.

In 2016, backers of Hillary Clinton called Bernie Sanders’ single-payer plan a "fairy tale," but the real fantasy is that you can grandfather in the insurance and pharmaceutical industries and still contain costs. Obamacare brought health insurance to upwards of 20 million people, an historic achievement. But for the millions of unsubsidized, the mandates and exchanges with which it is most closely identified just made life harder.

America is descending into cartel capitalism. It’s become a nation of middlemen we call "entrepreneurs" but who are really mere gatekeepers and toll collectors. Own the pipeline, own the product. It’s why Google gets money that should go to the New York Times (and Salon), and why Comcast owns NBC. New technologies account for some of the phenomenon. Pay-to-play politics accounts for the rest.

By reputable accounts, close to 30 cents of every health care dollar we spend goes to overhead. As it happens, Canada has the second-highest overhead in the world, at about 16 cents. If we could just tie Canada for last place rather than having it all to ourselves, we’d save enough money to pay for the health care of every one of the 20 million people served by Obamacare, and all of the 28 million it has yet to reach. We could even bring relief to those left out of its equation, who due to high copays and deductibles must splurge on insurance and scrimp on care.

A single-payer system is, hands down, the most cost-effective way to finance and administer health care. But how do we get there? Recent experiences in Vermont and California suggest the barriers to entry at the state level are high, due largely to fragmentation of program jurisdiction. Progressives, who at present are the only political force in the country dedicated to the kind of systemic change the system needs -- and the public overwhelmingly supports -- must consider their next move carefully.

We must build our system piece by piece, and at low transition cost. A "robust" public option, one that is self-administered as well as self-insured, would do the trick. Our workforce totals 125 million people. Government, nonprofits and businesses employing 100 or fewer people account for one-third of that total. If state employee plans were to invite the others in, they’d quickly recoup their investment and see savings of their own. A third of the country could soon be enjoying its own single-payer health care system, with the rest busting down the door to get in.