"When you used to say 'farmer,' you wouldn’t have me as the picture.": Urban farming in Sacramento

Fighting back against the food desert one square-foot farming plot at a time, Chanowk Yisrael leads the way 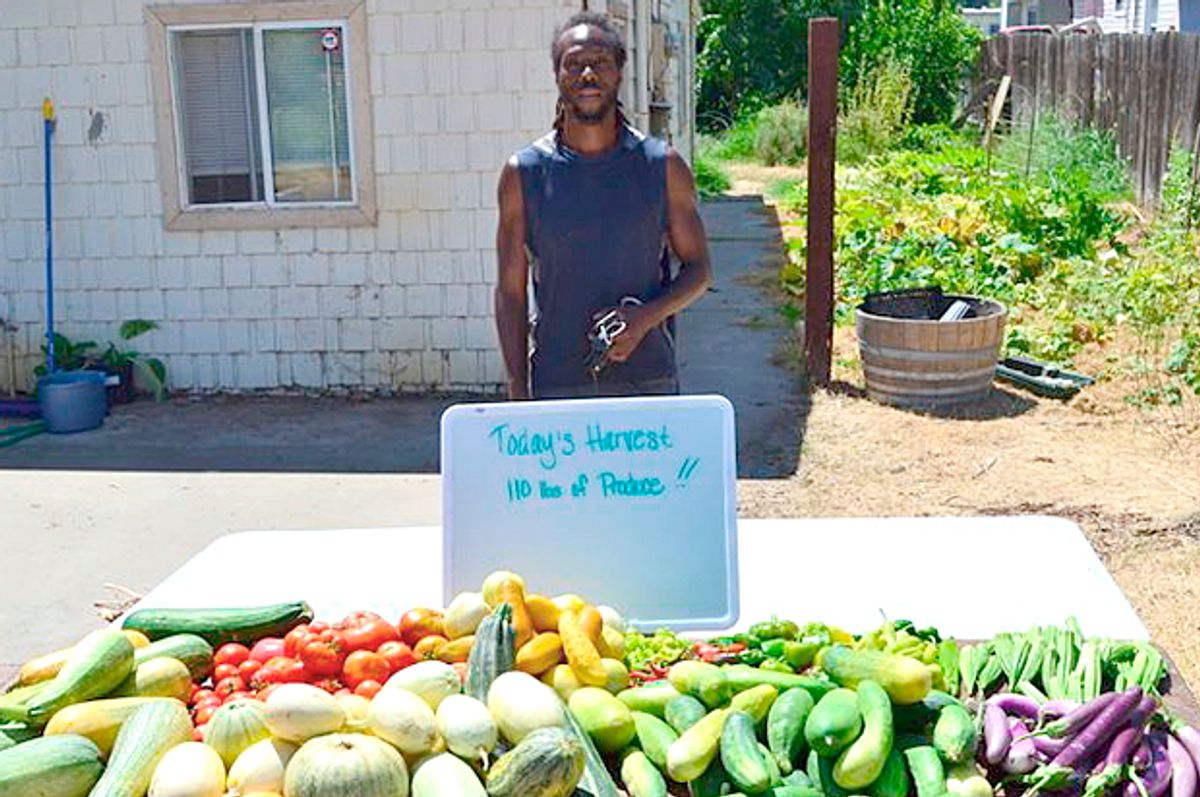 Chanowk Yisrael runs next door to surprise his neighbors with a bowl of cherries he just harvested with the help of 48 other members of the community. The harvest came from the school across the street, with which he has a Memorandum of Understanding agreement for the use of the garden. Yisrael, his wife Judith and her family, and their nine children are not new to urban farming. They’ve been doing it in their own backyard since 2007.

Yisrael, a skinny but muscular man in his early 40s, tells me that for some of the folks (even into their 30s), this was the first time they’d experienced the joy of pulling a piece of fruit off the vine and biting into it right then and there. It’s a life-changing experience, he says, that he provides for people year-round in his backyard garden.

“People come back after months, sometimes years later, saying, ‘I came to your garden and here’s what I’ve been doing since then.’ They show me pictures and their whole backyard is square-foot gardening,” Yisrael says.

This is in the Oak Park neighborhood of Sacramento, California, which is currently battling food insecurity, poverty and gentrification, which is largely the result of historical racism, redlining and other tactics designed to undermine the fabric of the community. Oak Park is Sacramento’s first suburb. After World War II many non-white Americans moved here because other neighborhoods were racially restricted. Now it’s the “it” neighborhood for out-of-town investors to flip houses and make a profit.

“Most gentrification efforts are led from the outside in. What we’re doing is we’re making change from the inside out. And people are seeing that. We’re transforming the 'hood for good,” Yisrael tells me.

As we speak, he transfers young plants from the greenhouse to palettes outside so they can harden off before getting planted in the ground. Then he goes out to till the soil in one of his gardens (or as he calls it “dancing with the earth”), opting not for a rototiller, and instead using a broadfork. He jokes that interviewing a farmer is a “moving target.”

The Yisrael Family Farm has been in operation since 2011, before there was much talk in the media about “urban farms.” They grow food for themselves (crop varieties change with the seasons) and they also sell what they don’t need to their neighbors via a table on the driveway. Yisrael tells me the prices are significantly lower than the organic produce at grocery stores because he doesn’t have to worry about the same overhead and transportation costs.

The farm makes its income through a variety of sources. They hold classes on cooking, health and farming. They sell soap. They hold harvest events, and will even help community members build gardens in their own yards. They also hold their annual Urban Farm to Fork event, which is a response to the pricey mainstream Sacramento Tower Bridge Dinner in the fall, which celebrates the culture of farm-to-fork the city is known for, and runs upwards of $200 a meal. Yisrael charges $25 for a five-course vegetarian meal, utilizing much of the produce from his own backyard, and even provides live music.

“A true farm is social. We only think of it economically. Eating is one of the most basic political and social acts that you can partake in. Food is a weapon,” Yisrael says, and thinks about how incredible it is that he spends his days farming. “I didn’t know I was going to get all into this when I first started. But being in the soil on a regular basis — oh, I see why people quit their jobs and do this. I think I’m going to be the next one.”

It was in 2007 when Yisrael started planting food in his backyard. His intention was solely to feed his family. When his parents both got cancer, he was determined that he and his family would do whatever they needed to do to eat healthy. He quickly saw that eating an organic-plant-based diet was expensive. Even though he worked as a systems engineer in the IT department of a global telecommunications company, making good money, it dawned on him that he’d have to work more to afford to eat the right way. The other option was to grow the food himself.

“Food insecurity is not just something that affects poor people. It affects everybody,” Yisrael says. “As I started growing food, I realized that what was really changing was me.”

Being out in his backyard growing vegetables sparked something in him: passion, which he wasn’t getting from his corporate job.

“I’m not really knocking 9-to-5s. But what I found is that most people are working jobs they don’t necessarily want to do. When you’re not doing the thing on a day-to-day basis that is connected to your passion, it’s so tiring,” Yisrael says. “This, I don’t ever get tired. There are times when my mind is like, I still got more to do. I’m having so much fun. But my body’s like, nah, you’re not doing nothing else today.”

We discuss his role in the Oak Park revitalization, and what it means to “transform the 'hood for good.”

“This is changing the status quo. When you used to say 'farmer- six or eight years ago, you wouldn’t have me as the picture. The statistics say most farmers are upper 60s, white. But now you say 'urban farmers in Sacramento,' some people mention my name,” Yisrael says. “There are children that are watching this. And they’re saying, oh that’s what a farmer is. There have been people that have come to classes that have said, you know what, I’m in my backyard growing food because of you. I’m now eating healthy.”

When Yisrael decided to quit his job in 2011, he hadn’t exactly figured out how his farm would make money. At that point, it wasn’t legal to sell produce in the county, something he and a group of urban farmers called the Sacramento Urban Agriculture Coalition helped to change in January of this year. He knew that by making the decision to follow his passion, he would figure out how to make it work. By 2013, he could sustain himself from a variety of income streams.

“We jumped off the building and we built the parachute on the way down,” Yisrael says. “When I said I’m going to start a farm in Oak Park, people said, you can’t do that. I’m like, yes you can. You can do anything you want.”