With the help of industry insiders and lobbyists, Scott Pruitt is rapidly changing the EPA

"It amounts to a corporate takeover of the agency, in its decision- and policy-making functions" 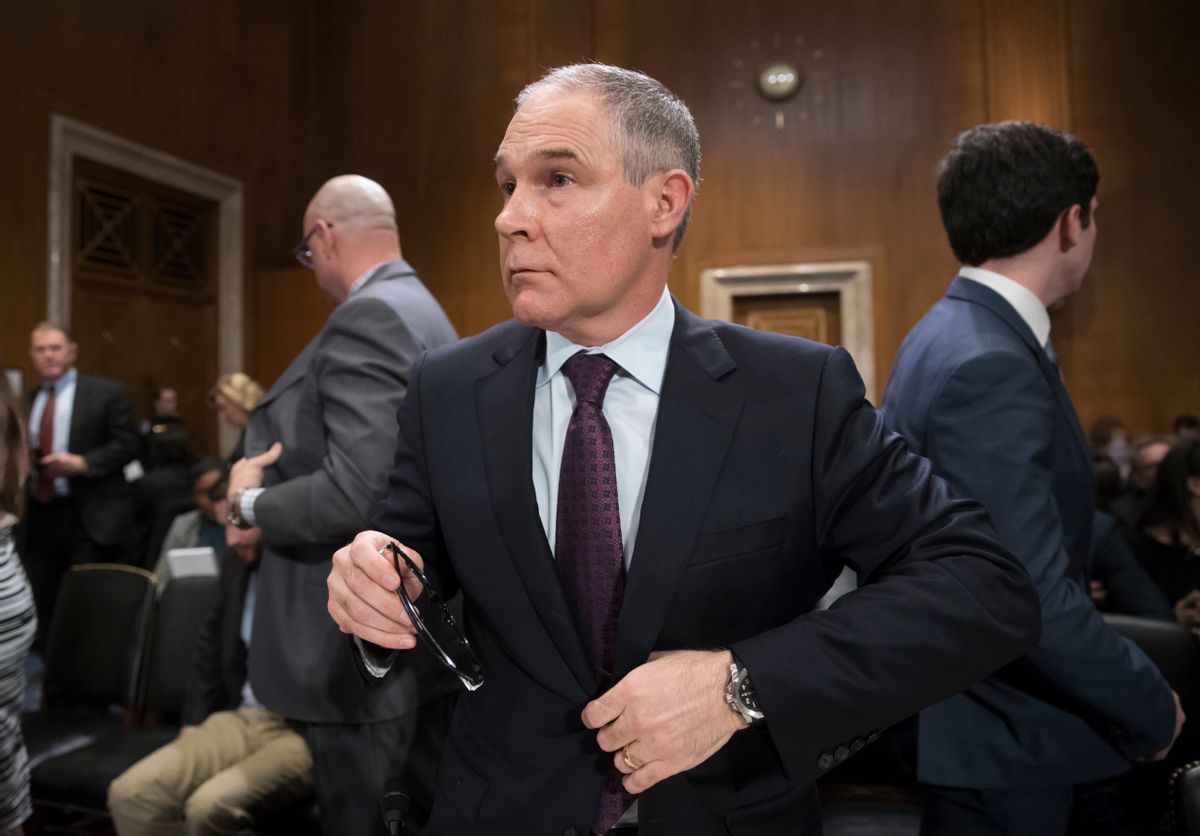 Environmental Protection Agency administrator Scott Pruitt has only held the job for four months, but he has already made regulatory rollback's "larger in scope than any other over so short a time in the agency’s 47-year history," according to the New York Times. Over 30 environmental rules have been undone, delayed or blocked as President Donald Trump, and supporters of Pruitt have cheered on the new direction of the EPA.

The EPA workforce will already be slashed by 8 percent by the end of the summer. While Trump has yet to experience many legislative wins, the dismantling of the EPA is in full force.

"Just the number of environmental rollbacks in this time frame is astounding," Richard Lazarus, a professor of environmental law at Harvard, told the Times. "Pruitt has come in with a real mission. He is much more organized, much more focused than the other cabinet-level officials, who have not really taken charge of their agencies. It’s very striking how much they’ve done."

But both sides agree: While much of Mr. Trump’s policy agenda is mired in legal and legislative delays, hampered by poor execution and overshadowed by the Russia investigations, the E.P.A. is acting. Mr. Pruitt, a former Oklahoma attorney general who built a career out of suing the agency he now leads, is moving effectively to dismantle the regulations and international agreements that stood as a cornerstone of President Barack Obama’s legacy.

In what would normally be a job for lawyers at the State Department, Pruitt will play a lead role in "devising the legal path" for the U.S. to withdraw from the Paris climate agreement. Trump announced the withdrawal at the beginning of last month, making America the only country other than Syria and Nicaragua not in the agreement. But Nicaragua refused to join because they didn't believe the terms were aggressive enough in combatting climate change. Pruitt is leading the way, with little consultation from the agency's 15,000 career employees, according to the Times.

"Instead, Mr. Pruitt has outsourced crucial work to a network of lawyers, lobbyists and other allies, especially Republican state attorneys general, a network he worked with closely as the head of the Republican Attorneys General Association," The Times reported.

Pruitt has largely relied on a "a small network of political appointees" which includes industry lobbyists, according to the Times. In May, Pruitt fired five scientists on the agency's Board of Science Counselors — they were replaced with fossil fuel industry insiders.

"It amounts to a corporate takeover of the agency, in its decision- and policy-making functions,” Robert Weissman, the president of Public Citizen, a government watchdog group, told the Times. Pruitt and the Trump administration have made their strategy for the EPA as transparent as possible, and they have wasted no time implementing it.