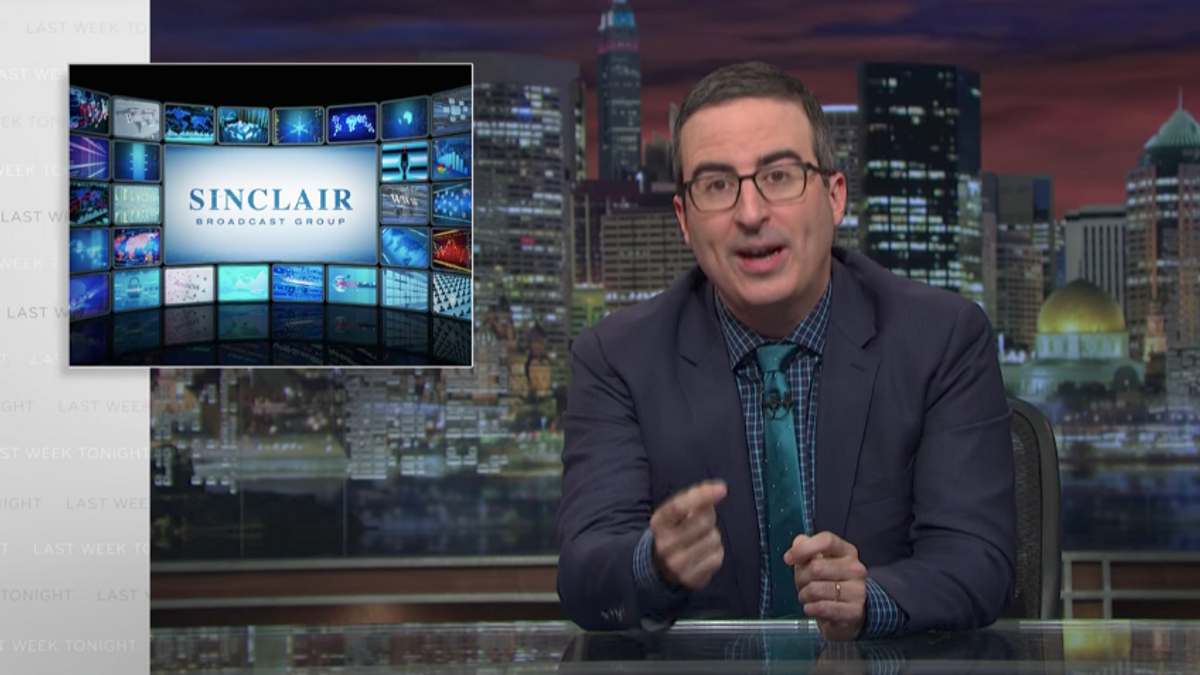 John Oliver began the latest episode of "Last Week Tonight" on Sunday by pointing a gun at the audience so they would pay attention to the "potential problems in corporate consolidation of local news."

The late-night comedian focused on the dangers presented by Sinclair Broadcast Group, a corporation that owns various local television stations across the country and often injects them with right-wing political viewpoints. Oliver said Sinclair "may be the most influential media company you've never heard of."

He then went on to discuss an alarming potential merger: Sinclair is expected to pay about $4 billion for Tribune Media, which would mean the combined companies will create the largest single group of television stations in the nation. While the deal still needs regulatory approval, Oliver said it's "widely assumed that that will happen." Sinclair's reach would expand drastically, and hold an average total viewership of 2.2 million households, which as Oliver pointed out is more than any current primetime show on Fox News.

Sinclair executive Mark Hyman and political analyst Boris Epshteyn, a former senior adviser to President Donald Trump's campaign, are featured in segments that local news affiliates "must run," Oliver said. He noted that Sinclair even writes scripts for local news anchors to introduce the pieces, and showed a series of clips of various news anchors in different markets delivering the exact same lines during their segments.

Sinclair stations frequently feature a segment called the "Terrorism Alert Desk" that promotes stories almost entirely about Muslims, employing what Oliver suggested were fear-mongering tactics and inflammatory images. One story Oliver showed the audience was about Muslim women who chose to wear "burkinis" at the beach. "Should this Tribune acquisition go through, there are going to be even more good journalists having to see their hard work placed alongside terror-desk nonsense," Oliver noted.

"You should find out who owns your local stations and bear that in mind as you watch."