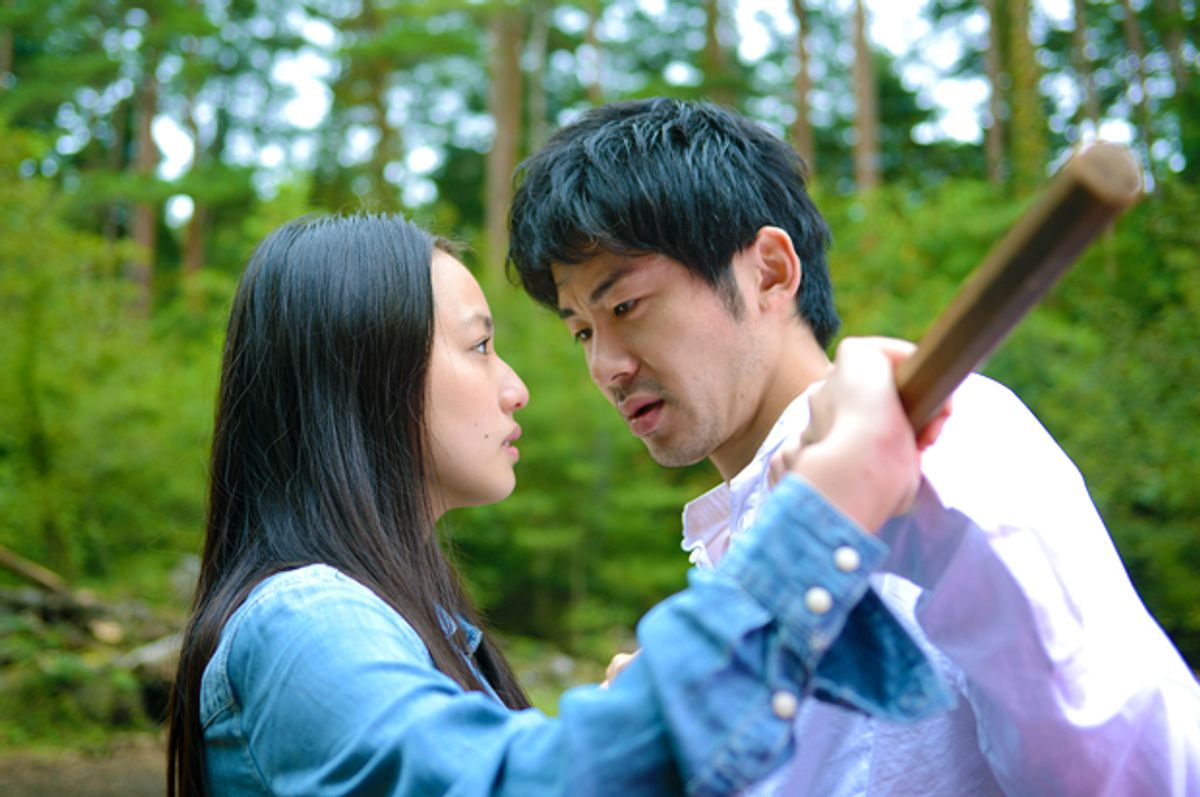 The other storylines in Shiraishi’s sex-filled melodrama are equally interesting. Rie (the mono-monikered Michié) is married, but services Kaneda, an elderly widower who craves her company. Kaneda does, in fact, want something more than sex from Rie, and when that is revealed, in a morbidly comic scene, “Dawn of the Felines” shows the filmmaker’s cleverness for incorporating the required sex scenes into the plot. They certainly comply with the genre’s demand for nudity with tits and ass (the film resists full frontal exposures), but the sex is never explicit. While there is amusement and eroticism when Kaneda suckles Rie’s breast, the film is careful not to tip too far into exploitation and sleaze.

The film’s third character, Yui (Satsuki Maue) is a mother who leaves her young son with Mikami, whom she pays so she can work. Yui is not as popular as her colleagues at the agency, but she does connect with a comedian who hires her and has a penchant for pinching her “cute tits.” Her story may be the most dramatic, as the child’s welfare is given more prominence than Yui’s bedroom activities, but it is still intriguing.

“Dawn of the Felines” has a fourth storyline involving the agency’s manager, Nonako, who also gets a sex scene, but he mainly adds comic relief. Even if the fucking is at times titillating, a surprising amount of the film is poignant. Moreover, the strong performances make this glossy reboot of the genere a worthwhile entry in the genre.

Writer and director Akihiko Shiota’s entry, “Wet Woman in the Wind” is rawer in terms of style and a bit sillier in terms of plot, two factors that work in the film’s favor. It opens with Shiori (Yuki Mamiya) riding her bicycle into a river, stripping off her top and asking Kosuke (Tasuku Nagaoka) if he could put her up for the night. Her brazenness is much of her appeal and why many men — and even one woman — bed her.

Kosuke, however, is not so quick to befriend her, as he has given up on women and prefers to live alone in the forest. Shiori insists otherwise, grabbing his penis and asserting his attraction to her. “You think you can escape me, but you can’t,” she warns. Fate, of course, brings them together when Kosuke shows up at a café where Shiori works.

In fact, when Kosuke is having sex with another woman, Shiori turns up and quickly kicks Kosuke away so the ladies can act on their same-sex passions. The sex scenes in “Wet Woman in the Wind” are pretty arousing; rather than following the genre rule of one sex scene every 10 minutes, it seems that Shiota has contrived the last act of the film to consist of one 10-minute sex scene after another. Shiori goes at it with bed-crunching gusto with everyone she meets, rocking a minivan with four members of an acting troupe, and literally bringing down Kosuke’s ramshackle house at one point — a moment that prompts Shiori to cut through some fabric to rise topless out of the collapsed house so she can keep on fucking Kosuke. Other women in the film bare their breasts for prolonged sex scenes, but below the belt and male nudity is kept to a bare minimum, suggesting the audience is for these films is largely straight males.

“Wet Woman in the Wind” doesn’t quite have the emotional pull of “Dawn of the Felines,” but the film generates several laughs as Shiori and Kosuke are so consumed with their passions that they can’t uncouple to eat. Watching them devour food and each other in this scene is pretty amusing.

Shiota’s entry is the best of these three reboots. It’s slight but highly satisfying — the cinematic equivalent of a quickie.

Rounding out the three films is “Aroused by Gymnopédies” by Isao Yukisada. This is easily the strangest of the three, not only in terms of style but also content. The film opens in a dreamy fashion with Shinji (Itsuji Itao) recalling his wife Yukiko playing Erik Satie’s piano piece, “Gymnopédies.” The dream ends and he spies his female neighbor through a window. She bares her breast, and he vigorously masturbates. But this scene ends abruptly, and Shinji, a down-on-his-luck filmmaker, goes off to his set to deal with an actress who can’t get along with her co-star, which ends up cancelling the film.

Dejected, he meets a series of women, including a student he says he doesn’t love, but fucks, and his ex-wife, whom he asks to have sex to raise money for him. He may be hoping to find some relief to his misery, and when the film reveals that Shinji’s wife is in a coma it explains, but does not excuse, his behavior. In one of the most outlandish scenes, Shinji has sex with his wife’s nurse to rouse Yukiko back to health. This episode is both ridiculous and played straight. It is also one of several examples of women being abused. Another disturbing sex scene has a topless woman being whipped. It is not entirely clear if “Aroused by the Gymnopédies” is meant to be a comedy — there’s also a scene of Shinji pausing during sex as a man urinates nearby — because the film is as mournful as the Satie piece.

Taken separately or together, what emerges from these reboots is how filmmakers — then and now — used their artistic freedom to create popular art. They illustrate how to be creative with limited content, money, and time.