Fourth of July viewing: Before there was "Hamilton," there was "1776"

Why the 1972 movie should be regular viewing for every American 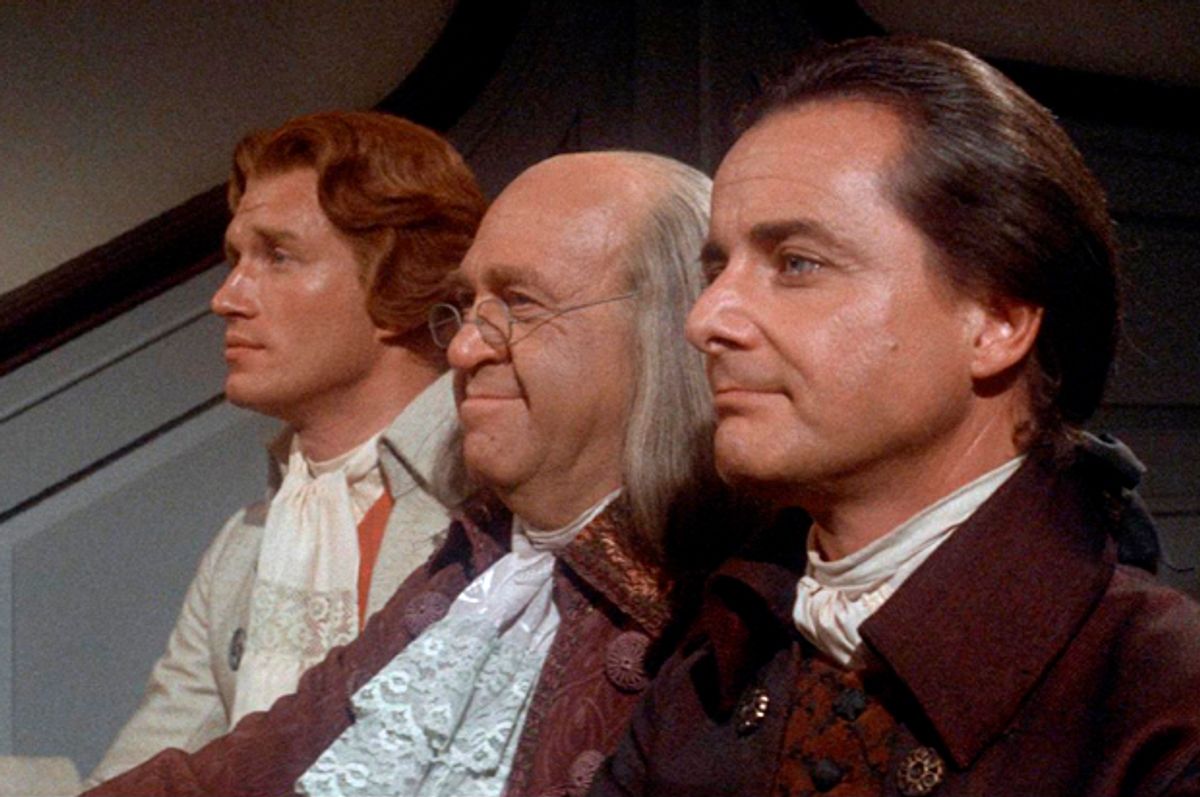 It's difficult to explain why "1776," the 1972 motion picture based on the musical of the same name, is such a great movie. Starring William Daniels as John Adams, Howard Da Silva as Benjamin Franklin and Ken Howard as Thomas Jefferson, it tells a fascinating story with which all Americans are (or at least should be) intimately familiar — namely, the tale of the fierce debates at the Second Continental Congress that culminated in the drafting and signing of the Declaration of Independence.

It's a great story, one that both I and many of my close friends ritualistically watch every 4th of July. Yet what about "1776" makes it so resonant? Why does this movie stand out when countless other patriotically themed motion pictures fade into the background?

It's instructive to first look at another recent musical about our Founding Fathers, "Hamilton." While it doesn't pass a lot of tests when it comes to historical accuracy, "Hamilton" works so well because it brilliantly resurrects the philosophical debates that were at the core of America's founding during the ratification of the Constitution and the administration of President George Washington.

"1776" does the same thing, only with a different moment from American history. It picks apart the debates that occurred between, on the one side, Adams and other revolutionaries who believed America needed to break free from the British Empire, and, on the other, the motley of factions who, for various reasons, felt we should remain loyal to Great Britain.

Like "Hamilton," "1776" takes a lot of liberties with historical accuracy, but not in the ways that count the most. Much of the dialogue and song lyrics are direct quotes from the letters and memoirs of the participants at the Second Continental Congress, and the various topics touched upon by the main characters were indeed the focus of fierce debate: the abolition of slavery, whether the colonies had indeed became nations of their own, the proper role of government in the lives of its citizens.

Perhaps even more importantly — and again, in direct parallel to "Hamilton" — "1776" brings to life the vibrant personalities that helped bring America to life. You have Daniels as the acerbic, indignant and unshakably honorable Adams, Da Silva as the sly and charming but deeply idealistic Franklin and Howard as the quiet and cerebral Jefferson. Like all of the best works about history, it forces audiences to see important figures from the past as flesh-and-blood human beings rather than stodgy icons.

Finally, "1776" contains moments that speak to timeless political issues. With "Hamilton," the song "Yorktown (The World Turned Upside Down)" is a standout moment — so much so that an entire track called "Immigrants (We get the job done)," a riff on the show-stopping lyric from that song, has been recorded as a response to the rising anti-immigrant sentiment in America.

Similarly, "1776" contains the song "Cool, Considerate Men," which President Richard Nixon wanted cut when the musical was performed for the White House. Why? Let's see if these lyrics about American conservatism give you a sense of the reason.

Come ye cool, cool conservative men
Our like may never ever been seen again
We have land, cash in hand
Self command, future planned
Fortune thrives, society survives
In neatly ordered lives
With well-endowered wives

But don't forget that most men with nothing would rather protect the possibility of becoming rich than face the reality of being poor. And that is why they will follow us.

And that, in the end, is perhaps the most important legacy of the truly great musicals about the American Revolution. The word "history" for most people evokes boring lectures instead of epic adventures. The most effective way to make the past come alive again is to connect the struggles of our forebears to the ones we face today.

I can think of no better way to celebrate the 4th of July.