America’s violent birth: Why we shouldn't be surprised that U.S. politics is a blood sport now

The Founding Fathers were no strangers to extreme polarization, political violence and intimidation of the press 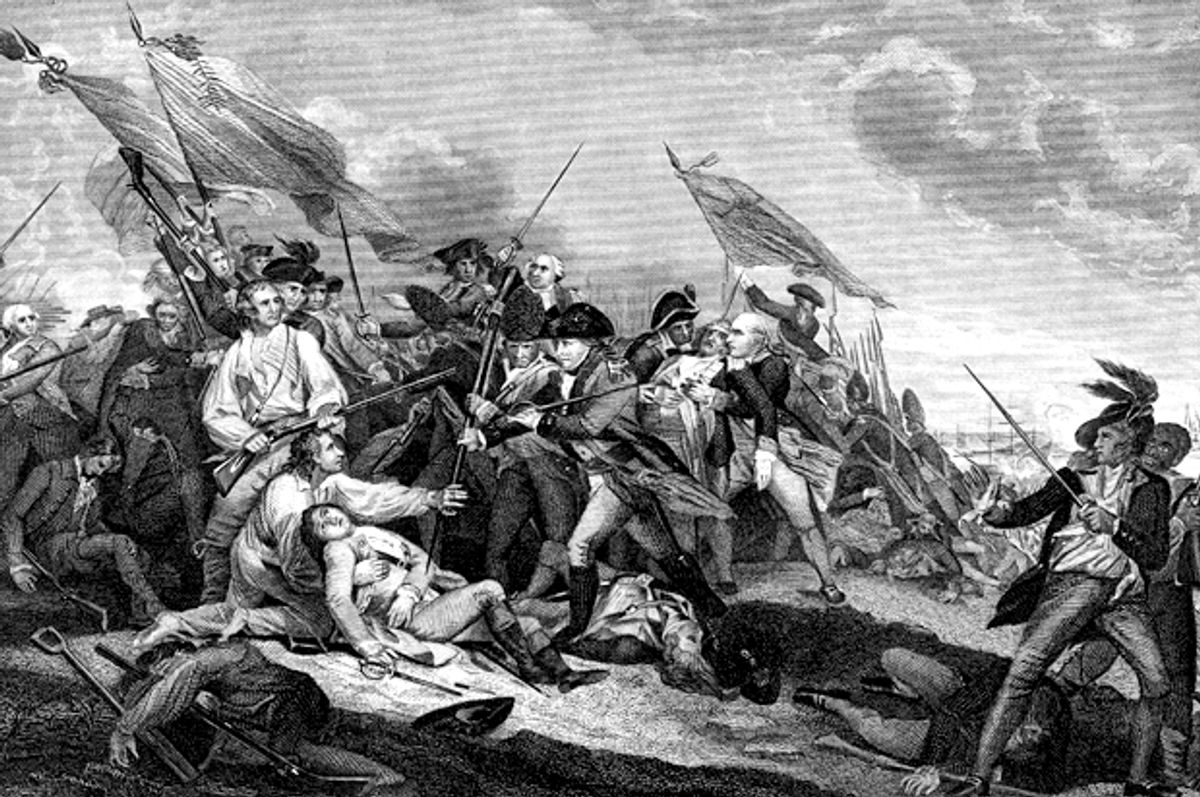 Over the past year, we have witnessed a major party nominee encourage violence against political opponents. An election has fractured relations among friends and families. Painted swastikas have appeared on America’s college campuses, while presidential rhetoric only reluctantly condemns anti-Semitic attacks. The new regime delegitimizes its critics and calls the press “the opposition party.”

These disturbing developments should perhaps not entirely surprise Americans. After all, extreme polarization, violence as a means of politics, and intimidation of the press were an integral part of the nation’s tumultuous birth. But instead of remembering that fierce rancor, we have been holding on to the founders’ powerful fiction of a non-violent, unified American Revolution. Today, as the deeply divided United States endeavors to find a way forward from its present perils, it is finally time to look back and reckon with this nation’s divisive, violent founding.

Most Americans don’t realize that the Revolution was not just a courageous struggle for noble ideals against an oppressive empire, but also America’s first civil war. John Adams estimated that one third of the American population supported the Revolution, one third were uncommitted and fully one third opposed the revolution — the American “Loyalists,” who cut across every social echelon, religious denomination and geographic region, as well as race. The Revolution divided communities and split families, most famously the Franklins of Philadelphia — Benjamin, the Founding Father, and his son, William, a passionate Loyalist leader. Faced with strong internal opposition, and soon, too, war against the world’s mightiest empire, the Patriots relied on terror — of acts of violence and the threat of violence — to crush dissent.

The revolutionaries’ rhetoric delegitimized and dehumanized their opponents. A Loyalist was a “thing whose head is in England, and its body in America and its neck ought to be stretched.” Even George Washington advised that Loyalists ought to commit suicide; failing that, one needed “to root out or Secure such abominable pests of Society.”

While the Revolution threatened with words, freedom of the press was one of its early victims. Patriots attacked the shops of Loyalist printers. They bullied editors into retracting dissenting views, offered bounties for the capture of inconvenient authors and seized and burnt the entire print run of contentious pamphlets. As the current administration peddles “alternative facts” and declares the press the “enemy of the American People,” we would do well to recall the German Jewish poet Heinrich Heine, who warned in the early 19th century: “Where they burn books, they will also ultimately burn people.”

In the Revolution, self-declared “committees of safety” interrogated political suspects and searched their homes, while Patriot mobs handed out vigilante justice. Among the most physically damaging methods was pouring hot tar over a victim’s head and naked torso so that it burnt through the skin and scalded the flesh. Patriots subjected Loyalists to water torture to extract information, or whipped and beat them until their backs were grazed and rent, their ribs broken. Some died as a result of their abuse; others were lynched. Loyalist priests dodged bullets fired at them mid-sermon. Women who assisted the British by ferrying intelligence, goods or Loyalist refugees across the lines risked severe treatment, like New Yorker Lorenda Holmes, whose foot the Patriots burnt with glowing coals.

Patriots eventually held thousands of their neighbors as political prisoners, confiscated their property, or drove them into hiding or exile abroad. But 20,000 Loyalists took up arms to support British forces as they plundered American farms and homes, raped women and committed battlefield atrocities. Captured rebel soldiers sustained the highest mortality rates among prisoners of war in American history. Patriots and Loyalists waged vicious partisan wars across the Southern backcountry, New Jersey and New York until well after the conclusion of major Anglo-American combat activities at Yorktown.

At the end of the conflict, the vast majority of Loyalists chose to stay or return to their communities, fully aware that their safety was threatened by the Patriots’ thirst for vengeance that no official truce could quickly assuage. Loyalists continued to suffer legal discrimination and renewed popular violence.

Yet eventually, despite these undercurrents of animosity, the founding generation integrated their new nation more quickly than many other countries after a decade of fratricidal conflict. It certainly helped that at war’s end, 60,000 Loyalists went into permanent exile overseas — the equivalent, per capita, of 8 million Americans today. But for statesmen like George Washington, maintaining America’s international reputation as a treaty-abiding nation also required reconciliation at home. Alexander Hamilton argued that protecting the Loyalists’ rights was the best way of preserving liberty, order and safety: tolerance must trump “the little vindictive selfish mean passions of a few.” Communities rethreaded old socio-economic ties across the Revolutionary divide, valuing Loyalists’ capital, professional skills and consumer power.

But for the Loyalists — and the nation’s conscience — integration came at a price. The Patriots controlled the story of the Revolution in monuments and histories, in parades and Fourth of July speeches. The Loyalists stood by quietly as American-on-American violence was expunged from the nation’s consciousness. The Revolution’s winners wore the scars of war as markers of national pride; Loyalist losers hid their trauma. Neither did the Loyalists nurture a melancholy folklore of loss like American Southerners after the Civil War. Out of such silence, and silencing, a sanitized and romanticized national origins story was born.

To be sure, brutal political violence, demonization and dehumanization continued well after political reconciliation, as the United States entrenched slavery following its war for liberty. Southern women petitioning for their Loyalist husbands’ safe return highlighted their contributions to white supremacy: During the British occupation, they had returned stolen slaves to their rebel owners.

As a German-born historian of the British Empire, I grew up in a country that confronts its fascist, genocidal past with soul-searching directness. I studied and taught in another country, the UK, that still struggles to face its global legacy of imperial violence. Now I live and work in the United States of America, a nation whose violent birth has long been suppressed in public memory. In 2009, I moved from London to Washington, D.C. and began a fellowship at the Library of Congress. Every morning, I was greeted on my way to Capitol Hill by Tea Party activists, who equated rejecting health care reform with the 1773 Boston harbor protest. Theirs was an anti-historical appropriation of the founding. As we are once more reminded that would-be despots want us to forget history, our response must be to know our history. For Americans, this points not just to the world of the 1930s but also to an unvarnished history of the nation’s founding.

Holger Hoock was educated at Freiburg and Cambridge and received his doctorate from Oxford. He currently serves as the J. Carroll Amundson Professor of British History and Associate Dean for Graduate Studies and Research in the Dietrich School of Arts and Sciences at the University of Pittsburgh. He is the author of "Empires of the Imagination," "The King’s Artists" and "Scars of Independence" (Crown; May 9, 2017). An elected fellow of the Royal Historical Society, Hoock has recently been a Kluge Fellow at the Library of Congress; visiting scholar at Corpus Christi College, Oxford; and senior fellow at the Institute for Advanced Study, University of Konstanz.