Has Trump violated the spirit of the Declaration of Independence? It's not so clear

In some ways, the president stomps on its core values. In other ways, his posturing is par for the course 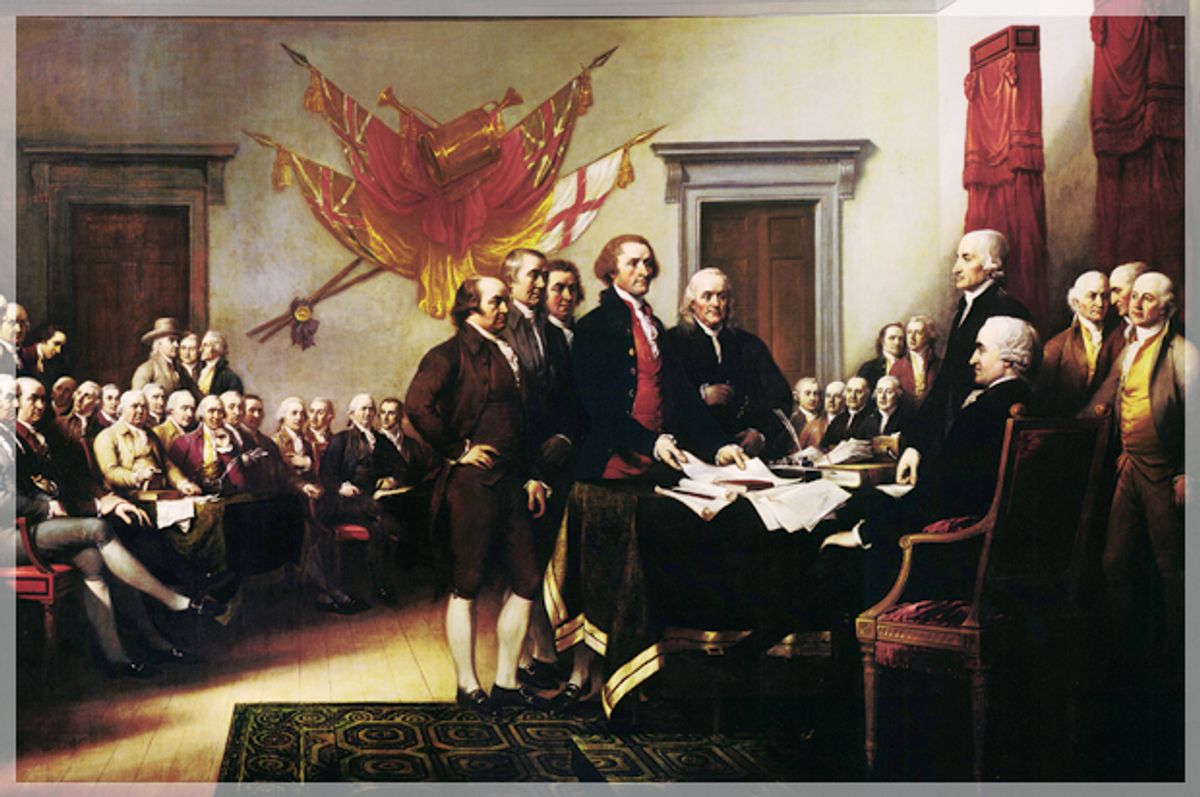 For last year's Fourth of July holiday, I wrote an article that analyzed the Declaration of Independence and broke down the various similarities between Donald Trump and King George III.

As I hope was obvious, that piece was meant in a somewhat tongue-in-cheek spirit; the politics of 1776, after all, were miles removed from the politics of 2016. Any analogies between the figures of the Revolutionary era and those of the latter are bound to be tripped up by the vast differences in historical context.

Looking again at the preamble of The United States Declaration of Independence for this article, I was struck by the timelessness of its opening line:

We hold these truths to be self-evident, that all men are created equal, that they are endowed by their Creator with certain unalienable Rights, that among these are Life, Liberty and the pursuit of Happiness.

It's worth noting here that some of the founding fathers wanted that line to read "and the pursuit of property," but that Thomas Jefferson changed it from "property" to "happiness," reportedly at the urging of Benjamin Franklin. The reasoning here was that property rights, although vital to freedom, were not the end-all of what government ought to safeguard. In an era when conservatism seems to be relying more and more on materialism as a philosophical justification (I'm looking at you, House Speaker Paul Ryan), the origins of the phrase "pursuit of happiness" are more relevant than ever.

That to secure these rights, Governments are instituted among Men, deriving their just powers from the consent of the governed ...

Although President Donald Trump has done more than his part to worsen voter suppression in this country, he is hardly the sole or even primary force behind doing so. From the voter ID laws that discriminate against racial minorities to the partisan gerrymandering that has entrenched Republican politicians in skewed legislative districts throughout the country, more and more Americans are learning that their government has gone to great lengths to disempower and disenfranchise them. This is as fundamental a violation of the spirit of our founding fathers as any injustice could be.

That whenever any Form of Government becomes destructive of these ends, it is the Right of the People to alter or to abolish it, and to institute new Government, laying its foundation on such principles and organizing its powers in such form, as to them shall seem most likely to effect their Safety and Happiness.

As bad as things may be in the Trump era, we have not reached the point where an outright abolition of our current government is necessary -- a point that bears making in light of the recent shooting at a congressional baseball practice, apparently carried out by a disturbed left-wing radical. That said, our government and society could use some structural adjustment, and Sen. Bernie Sanders' ongoing popularity indicates just how strongly people on the wrong side of the socioeconomic equation feel the need for major reform.

The final section of the preamble offers an explanation about how we should view our government in the Trump era that requires little commentary.

Prudence, indeed, will dictate that Governments long established should not be changed for light and transient causes; and accordingly all experience hath shewn that mankind are more disposed to suffer, while evils are sufferable than to right themselves by abolishing the forms to which they are accustomed... But when a long train of abuses and usurpations, pursuing invariably the same Object evinces a design to reduce them under absolute Despotism, it is their right, it is their duty, to throw off such Government, and to provide new Guards for their future security.

While I would not describe the actual or possible offenses committed by Trump and the Republican Party as "light and transient," they fall well short of anything that justifies violent reaction. Nevertheless, it seems disturbingly easy to demonstrate all the ways Trump and the GOP have failed to live up to the spirit of America's founding document.

If America is to fulfill its potential, it must make sure that every reasonable citizen can say that the spirit of the Declaration of Independence is a reality in their own lives. We have never quite gotten there -- and under the current administration, that goal feels further away than ever.