How a jihadist was made

Abu Zubaydah was a man born without a country. This is his journey from child of immigrants to Mujahideen fighter 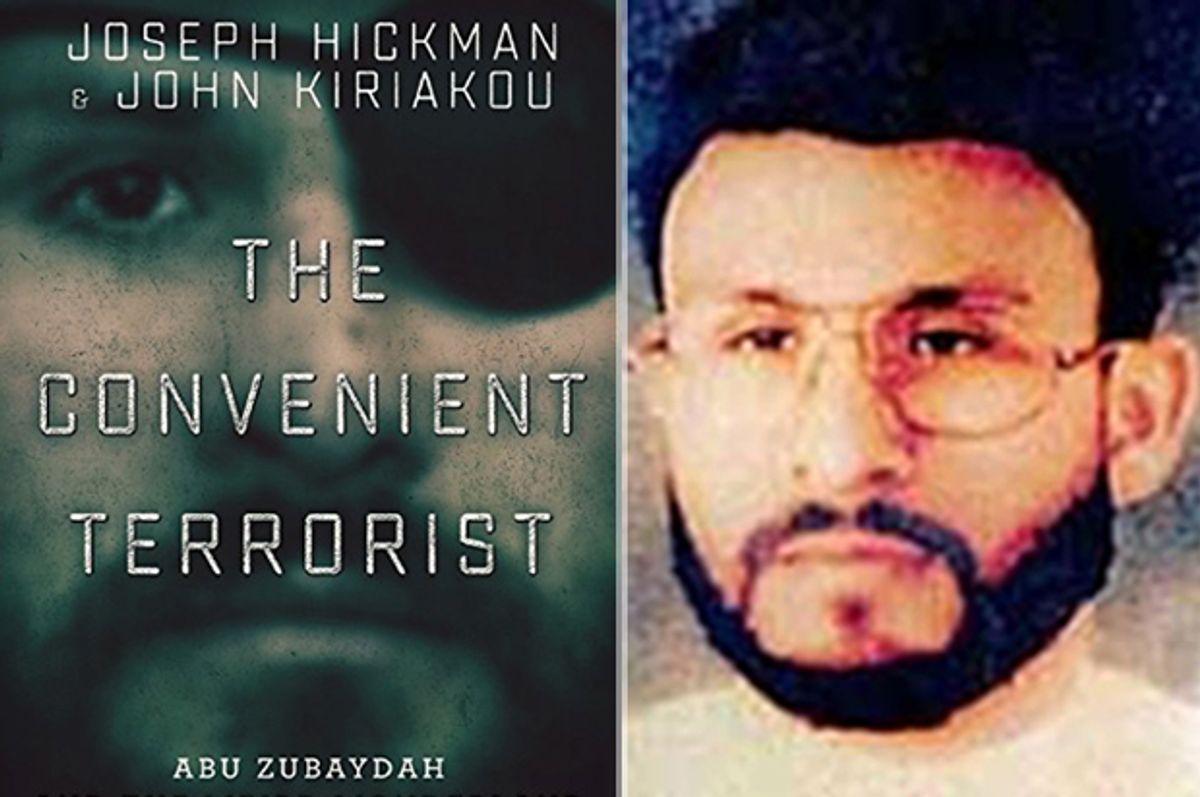 Excerpted with permission from "The Convenient Terrorist" by John Kiriakou and Joseph Hickman. Copyright 2017, Skyhorse Publishing, Inc. Available for purchase on Amazon, Barnes & Noble and IndieBound.

Zayn al-Abidin Muhammad Husayn—the man later known as Abu Zubaydah—was born in Riyadh, Saudi Arabia, on March 12, 1971. His parents had migrated there from the West Bank of Palestine five years before. His father worked as a schoolteacher in Riyadh, and his mother was a homemaker. From his earliest moments, Abu Zubaydah understood that he was in a unique situation. Even though his parents lived in Saudi Arabia, they were not citizens. Because of that, under Saudi law, neither was he. Abu Zubaydah had nine brothers and sisters. The family was middle class. His mother and father were, generally, loving parents who tried to do what was best for their children. His parents would often travel to the West Bank, and take their children with them so they could visit with their grandparents, uncles, and aunts who still lived there.

According to interviews with Abu Zubaydah’s family members, he was a normal child who enjoyed the typical games and activities. However, Abu Zubaydah was notably different in at least one important way. He was highly intelligent, as his family quickly realized. He liked to read newspapers and books. He listened to western music, and would dance to '80s pop records. He consumed every kind of culture he could find.

At the age of ten, he started questioning the status quo in Saudi Arabia. He did not think the citizenship rules were fair. He thought the way immigrants around his neighborhood were treated by Saudi citizens was unjust. (In Saudi Arabia—then as now—immigrants were often resented, ostensibly for taking jobs away from Saudi citizens.)

By the time Abu Zubaydah reached his teens, he’d found a handful of likeminded friends to hang out with. They would listen to Western music and watch American movies together. They particularly liked Michael Jackson. Abu Zubaydah’s closest friend, Mohammed Sham, recalled the day he and Abu Zubaydah had visited every record shop in Riyadh on a quest to find a music video of Michael Jackson’s hit “Billie Jean.” When they finally located a copy, the two watched the video over and over until they had memorized the singer’s dance moves precisely.

Sham and Abu Zubaydah would also often drive around the neighborhood in Sham’s father’s car, discussing religion and politics. One night, the topic turned to Palestine. While both of the youths agreed that Palestine should be a separate state from Israel, they disagreed about how best to accomplish this. Sham believed separate statehood should be accomplished through negotiations with Israel. Abu Zubaydah thought it should be achieved through Jihad. Abu Zubaydah felt this was justifiable according to the Koran, and that Allah would assure the Palestinians’ victory. The discussion got so heated that it devolved into a fight. And after that night, Abu Zubaydah never spoke to Sham again.

After Abu Zubaydah stopped talking to his best friend, his attitudes became more extreme. He announced that he was for an all-out rebellion against the Saudi society. This caused a great deal of stress in his home. Abu Zubaydah’s father wanted him to embrace the Saudi culture as his brothers and sisters had done—to dress like a Saudi and follow the traditions and customs to which Saudi citizens adhered. Abu Zubaydah refused, and typically dressed in Western clothes. His typical uniform was jeans and a T-shirt. For most of his teens, Abu Zubaydah remained a sullen loner without any real friends.

As he prepared to graduate from high school, Abu ­Zubaydah felt he had no country to truly call home. He ­decided he would go to college in India, to the University of Mysore, and study computer science. More than anything, his motivation was to get as far away as possible from what he considered a “despicable country.”

Abu Zubaydah’s father did not want him to go to India. He wanted Abu Zubaydah to instead attend college somewhere in Saudi Arabia. Yet as his son became more and more insistent, his father eventually relented—giving his blessing and even agreeing to pay for Abu Zubaydah’s education abroad.

India turned out to be a great disappointment. Abu Zubaydah arrived expecting to find a welcome respite from the culture that had made him feel denigrated and oppressed for so many years. Instead, he found entirely new things to perturb him.

The city of Mysore was a melting pot of Muslim and Hindu cultures. Abu Zubaydah found the Hindu religion to be both silly and sinful, and quickly decided that he despised its beliefs. He found the Muslims in the city to be “lukewarm” and half-hearted in their adherence to the faith. From what Abu Zubaydah could see, they seemed to have surrendered to the influence of Hindu culture.

Abu Zubaydah was once more unhappy. Once more, he felt as though his culture was being repressed and stifled. In addition, he was now truly alone, with no parents or siblings to support him. When he was not attending classes, he spent almost all of his time alone in the room he rented from a Muslim family. There he would study, read, and write poetry.

One day in the campus courtyard, he chanced to meet another Muslim student named Amin. Amin was a devout Muslim. He was also—like Abu Zubaydah—a foreign student, having been born and raised in Kuwait. Amin and Abu Zubaydah instantly became very close friends. It turned out that Amin embraced the same ideology that Abu Zubaydah had concerning Islam, and they were in agreement on most political issues concerning the Middle East—especially those concerning Palestinians.

During the war against the Soviets, several Mujahedeen groups had created military training camps throughout the areas they occupied. These camps were funded and supplied by nations like the United States and Saudi Arabia, and offered free military training not only to Mujahedeen fighters combating the Soviets, but to all Muslim men across the world. During the 1980s and 1990s, tens of thousands of men traveled to these camps to receive training in military skills. Most of these men would not fight against the Soviets. Rather, their mission was simply to learn skills that they could call upon if necessary in their home countries. The vast majority returned directly to their normal lives after receiving their training, and never engaged in combat.

Amin soon convinced Abu Zubaydah to accompany him on an adventure to Afghanistan to receive Jihadi training. On January 13, 1991, they began the journey, taking a train from Mysore, India to Peshawar, Pakistan. There, they stayed at a guest house operated by a Mujahedeen group called the Islamic Union. The guest house was code-named “The House of Martyrs.” It was one of three Islamic Unity guest houses in Pakistan. The other two were known as “The House of Supporters” and “The House of Conquerors.” Virtually all petitioners seeking Jihadi training in Afghanistan training camps came through Mujahedeen-operated guest houses like this.

Abu Zubaydah and Amin quickly became acquainted with other Muslim men making the same journey. They also learned they would be undergoing their training in a facility known as Khaldan Training Camp. They were told that once their training had been completed, they would be conducted safely back to Pakistan. That was—if they chose to come back. They learned they would have the option—if they so chose—to stay in Afghanistan and fight alongside the Mujahedeen against the communist-run Afghan government forces.

A week after Abu Zubaydah and Amin had first arrived at the guest house, they boarded a pickup truck that took them across the Pakistani border into Afghanistan. The ride became brutal. The mountainous terrain was dangerous, and the roads were in poor condition. To kill time, Abu Zubaydah got to know the other passengers in the vehicle. There were five in addition to Abu Zubaydah and Amin, and all were from Palestine. Two of these were college graduates who had received their degrees in the United States.

After forty-eight hours of travel, they arrived at Khaldan Training Camp. It was a large facility with many trainees, and Abu Zubaydah found himself greeted by men from all over the world. All of them seemed there for a purpose, but many—including Abu Zubaydah—were not sure precisely what that purpose was.

In the month that followed, Abu Zubaydah’s group of trainees learned how to fire AK-47 assault rifles, how to throw grenades, and other basic combat training. Alongside the military tactics, religious training was also dispensed. Abu Zubaydah and his classmates would sit for hours listening to Mujahedeen religious leaders give their takes on Islam, the universe, and what it meant to be a Muslim.

Abu Zubaydah found that he loved both the military and religious training. He also excelled at both. Studying the art of war was fascinating, and he had never felt closer to God. He also enjoyed the camaraderie that quickly formed between classmates. For the first time in his life, Abu Zubaydah was not an outsider or a second-class citizen. Here, he felt as if he truly belonged.

And so, after his training was completed, Abu Zubaydah left the camp and returned to India, but only for a short time. Within a month, he would travel to Afghanistan a second time to fight alongside his new brothers against the communist-backed government. He felt he had finally found a home.

Thus, Abu Zubaydah became what is known as a Jihadist, or a Mujahedeen fighter.