The stealth politics — and weird party themes — of this new "tradition," an event about the sex of a fetus 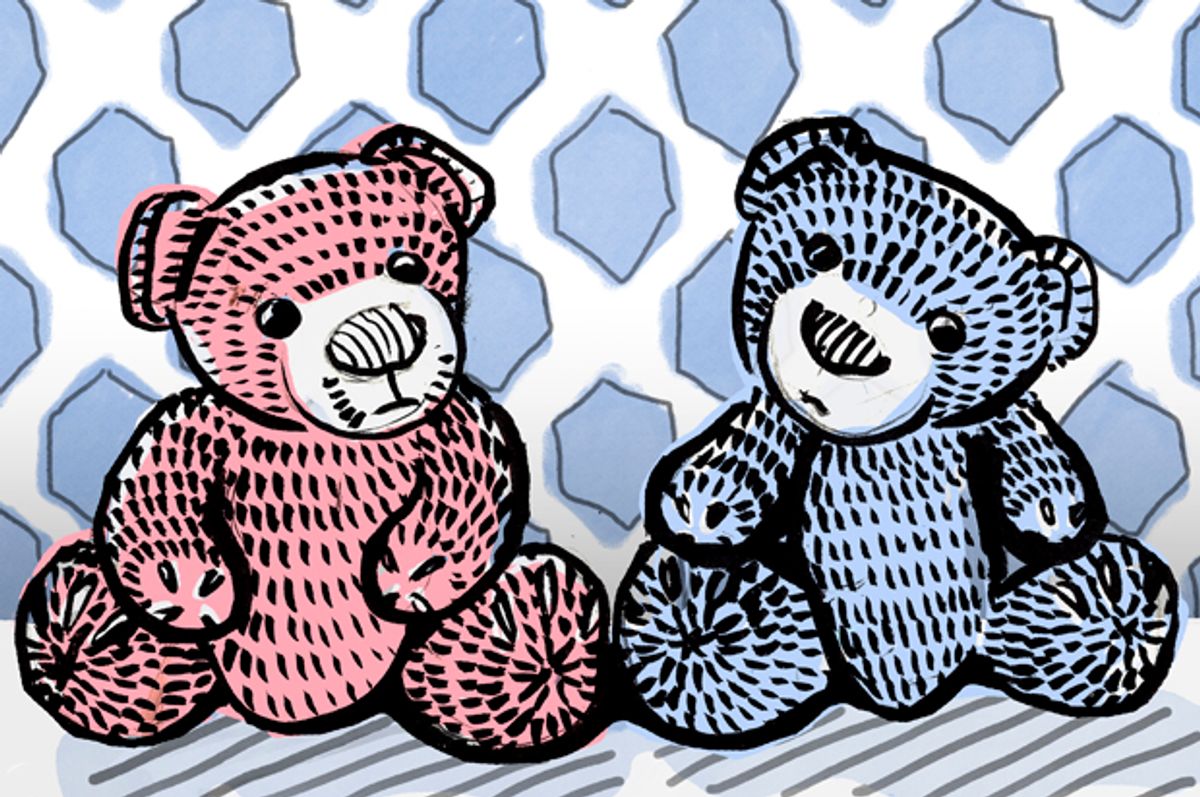 Congratulations, it's a boy! It's a girl! It's an elaborately choreographed performance of a rite of passage that used to be semi-private! One thing this event, where viewers or guests discover which flavor of genitals the fetus currently awaiting birth is packing, is not, however, is a "gender reveal" party.

To catch up the uninitiated: A “gender reveal” — whether celebrated in party form or released digitally with viral hopes — communicates the sex of a fetus to the audience in some aggressively cute manner. Sometimes the expectant parents know first and are “revealing” to their guests; other times the reveal is for the parents themselves — you know, an intimate little event orchestrated behind the scenes with an envelope from the ultrasound technician, a baker, a party planner and hopefully 300,000 YouTube plays.

The ultrasound information gets translated into an on-brand binary, ranging in complexity and tastefulness from cake pops containing blue or pink cake to an offer of “Sweet Cupcake or Stud Muffin?” or, god help me, jars of M&Ms sorted by “Nuts” or “No Nuts.”

The gender-reveal metaphor needn't limit itself to food, either. Ask yourself: touchdowns or tutus? Wheels or heels? Guns or glitter; pistols or pearls? (Well, damn, can’t a girl — or a boy — have both?) Feeling outdoorsy? A gun, one shot and an explosion of pink powder should impress.

This is what happens when you raise a generation on reality TV and then give them all their own "platforms" with the promise that if they work hard enough at it, they too one day might become a meme.

The gender reveal is a fairly recent addition to the baby-industrial complex but in the last couple of years it has grown in tenacity and ubiquity, if Etsy offerings are any indication. The concept may have reached its nadir recently when an Oklahoma man noodled a flathead catfish that just so happened to surface with a pink tag in its mouth — congratulations, sir, it’s a filet! — and Redditors think they've finally found "the worst" reveal ever, a lopsided pizzeria pie with "GirL" spelled out haphazardly in black olives.

There's nothing inherently wrong with another cupcake party or blowing up a barrel full of pink or blue powder, but the dogged refusal to call this event what it actually is — a sex reveal party — reveals some frustrating truths about Americans.

Right, right, we all know — sex is what's between the legs; gender is what's between the ears. And yet we stubbornly refuse to call these "not quite a baby shower, not exactly the climax of a ‘Fixer Upper’ episode" stunts by their proper names. Perhaps couples are afraid that Mimi and Popster will have flashbacks to 1978, to a different kind of party?

When my little sister was born in the '80s, the mystery of her sex hung over my mother’s pregnancy: If she had a boy, my brother would have to share his room; a girl, and my privacy was done-zo. I didn’t know that I had drawn the short straw on solo living until she had been delivered. (I love you, my little short straw!) But by the new millennium the ultrasound that can tell what the little tadpole had between its legs had become de rigueur.

The question of whether the parents wanted to "find out" ahead of time or be surprised at delivery — and then, whether or not they were going to share that information with anyone else — remained the major question for quite some time. The fact that so many actually wanted to keep the information private until delivery now seems quaint, or possibly un-American.

But it doesn’t strike me as a coincidence that this semi-elaborate ritual sprung fully formed from the bowels of Pinterest around the same time that our culture at large began to grapple with our understanding of gender. I mean, it's an extraordinary period: Previously-held absolutes are challenged and expanded every day. Periods of rapid and intense social change can prompt backlashes, even through relatively benign if somewhat eye-roll-inducing  phenomena like this. I suspect that the lack of a "nonbinary" option in the gender-reveal cutiverse provides some unarticulated comfort.

In a 2011 New York Times trend story, progressive parents grappled with how to support their little kids who didn't conform to traditional gender expression:

At first, Harry’s father had a hard time watching his son twirl around in princess wear. But his gift of the Barbie symbolized acceptance; Harry’s joyous gasp indicated that the little boy intuitively understood. “We are following his lead and supporting him for who he wants to be,” said Lee, who, like other parents interviewed for this article, did not want to be fully identified in order to protect their children.

Now, a handy book like Lesléa Newman's "Sparkle Boy" can be integrated into story time to help explain why some boys like glitter and that's OK. "Transparent" is an award-winning TV show, Caitlyn Jenner is a reality star and Laverne Cox is a style icon. Political battles are being fought now over transgender students' rights to use the bathroom that conforms to their gender, not their sex. People are announcing their preferred pronouns, and expecting them to be respectfully used. There's something about these "touchdowns or tutus?" parties that read like a socially-sanctioned pushback against this era of progress, a wishful-thinking corrective with cupcakes. Surely if we stage an elaborate stunt to reveal a baby's gender — rather than its sex — it will be cemented in destiny, right?

When I was but a blob of a bald-headed baby, the family story goes, I could not stop playing with Grandmother’s pearls when she held me. She announced right then and there that I would inherit them when she died — obviously I would grow up to be the kind of woman who would appreciate a Mikimoto set. This was accepted by my family without question. I do have those pearls, and I treasure them; to me, they represent Grandmother's appreciation for beauty and refined things.

But I also remember quite distinctly that when I was about three or four years old, whenever an adult asked me what I wanted to be when I grew up, I would answer in all seriousness, “A boy.” Nobody paid any attention, to my knowledge. We're all lucky that worked out — as it happened, it was a phase brought on by my intense admiration of my big brother — but it was just as much a phase for infant-me to grab the pretty necklace hanging within arm’s reach. One was read with profound meaning — it's a girl! — and one was brushed off as a silly fantasy.

We've come a long way in a short time when it comes to understanding gender, sex and sexuality, and yet we still have a long way to go. The stealth politics of the "gender reveal" suggest that there's still a widespread discomfort with that. And yet, sprinkled among all the "Buck or doe?"-style accoutrements in Etsy are a few rogue sellers offering "I'm Just Here for the Sex" banners and other party trappings, suggesting that a love for cupcakes and accuracy aren't mutually exclusive. Who knows? In 20 years the gender reveal may even have morphed from a prenatal celebration to an alternative to the Sweet 16. Call it the new debut, art-directed and personally branded by the guest of honor -- himself, herself, themselves or other-selved.