This atmospheric crime drama meanders at times, but hints at tremendous potential 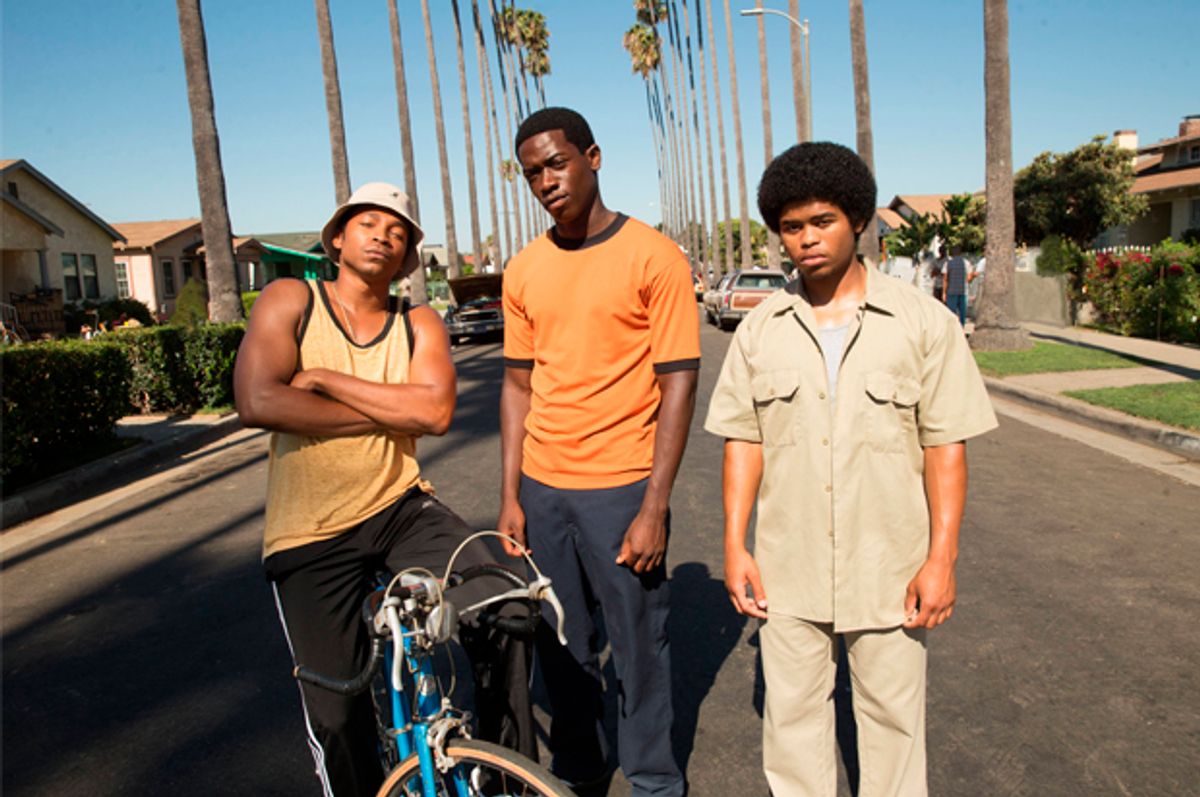 You can see how hot the streets are on “Snowfall,” John Singleton’s new drama for FX that tells the origin story of the crack epidemic. Sweltering heat crushes the Los Angeles streets as Franklin Saint (Damson Idris) moves between his neighborhood, a working-class area of South Central, and a gilded mansion stocked with cocaine in another part of the city.

Franklin has options, afforded to him thanks in part to an education at an integrated high school where rich kids were his classmates. One of those school friends has a girlfriend with a taste for white drugs and knows that Franklin, a stock boy, deals weed on the side.

“Snowfall, ” premiering Wednesday at 10 p.m., takes place in 1983, when cocaine was still the purview of rich white people and still a relative novelty in working-class neighborhoods. In bringing us to this time and place, Singleton and his co-creators Eric Amadio and Dave Andron are piecing together an origin story for American inner cities in general. Its chronicling of a party drug’s transformation into an annihilating menace that floods communities may one day be seen as an allegory for the ways that the vices of the wealthy are paid for by the poorest, resulting in an addictive society rife with widening inequities and rotting from the bottom up.

For now, it’s enough that “Snowfall” introduces the incredibly talented Idris, a young actor who pours a quiet, pained innocence into Franklin even as he slides into a dark and deadly world. Franklin is a smart kid who initially finds little thrill in putting his life on the line but who also has far fewer opportunities for upward mobility than his wealthy white peers.

The kid’s combination of street and book smarts makes him attractive enough to a flamboyant and temperamental crime boss named Avi (Alon Moni Aboutboul) to inspire him take a gamble on Franklin. Avi entrusts him with $12,000 worth of coke and tasks him with selling it, which he does in record time. Franklin’s willingness to shoulder a little risk and his ability to remain cool even when the barrel of a gun is in his face nets him thousands of dollars in a single run. The experience gives him some knowledge about the game, but his real education about the criminal world has yet to begin.

The marrow of Singleton’s career is steeped in his experience of growing up on Los Angeles, beginning with “Boyz n the Hood.” And though his range of inspiration has broadened over the years, he still has tight focus on the interconnectedness of black communities, particularly in the face of political forces that align against them.

But the attack underway in “Snowfall” is so brutal and efficient that the only way to make it hit viewers where it hurts is to make the stakes personal. Los Angeles is a place of stark socioeconomic variability, where some of the richest people in the country exist in bubbles only a few zip codes away from the impoverished.

Franklin’s access to the other half gives him a rare shot at making serious money quickly in a relatively untapped market. But it also places him on the verge of a phenomenon that will rip the soul of a community that’s already economically and politically disadvantaged in the extreme. Cocaine is about to be reborn as a cheap, fast and fatal high and transform the place where Franklin lives into a war zone. And Franklin’s success makes him a beneficiary of its appeal and a participant in the large-scale destruction it inflicts upon his people.

Viewing “Snowfall” solely through Franklin’s storyline suggests that it’s destined to develop in the same way as other character-driven crime dramas — slow chronicles of the corruption of good men. In time, it could very well develop into a tale as richly layered as “Breaking Bad” or “The Shield.”

The scope of “Snowfall” is wider than Franklin’s POV, however. Within the first episodes, the plot forks into three storylines, including that of a CIA operative named Teddy McDonald (Carter Hudson) who is putting together an unsanctioned operation to fund the Contras' conflict agains the Sandinistas in Nicaragua; and a Mexican wrestler, Gustavo Zapata (Sergio Peris-Mencheta), employed by the daughter of a Mexican drug lord, Lucia Villanueva (Emily Rios), to do her dirty work.

Viewers may accept that these subplots are necessary catalysts to move “Snowfall” toward its inevitable destination, but they’re also not as well formed or engaging as Franklin’s story. In the six episodes provided, they don’t intersect in any fundamental way aside from the thematic connection of cocaine.

Admittedly this disaffection could stem from the notion that versions of these characters and their storylines have previously informed theatrical releases and other TV series. Lucia, Gustavo and Teddy could slide right into a subplot of “Narcos” or “Queen of the South.”

The street-level chapters of this American tragedy have yet to be depicted meaningfully on screen. By placing viewers in the world of Franklin and his family, “Snowfall” gives this story about a systematically enabled crime a range of faces. We can see it in the scenes depicting Franklin’s affection for his mother Cissy (Michael Hyatt), who pays the bills by doing the unpleasant work her slumlord boss is too afraid to take on. But we can also see it in Gustavo’s internal conflict as he achingly mulls over whether the promise of great wealth is truly worthwhile if the consequences mean selling out families.

“Snowfall” meanders more than some people may have the patience to endure, and the details written into some of its dialogue may complicate its pacing more than illuminating the tale. On top of that, it’s a slow burn. But its potential is intoxicating, and the high caliber of its writing -- shepherded by Andron as its showrunner and producers such as Thomas Schlamme and Leonard Chang -- glows throughout its initial hours.

There’s enough material working well in “Snowfall” to persuade viewers to stick around to witness the eventual explosion. The question is how many people will have enough patience to watch the narrative methodically heat to a rolling boil.