The journey to confront my rapist

From the moment I decided to take this trip, everything in my life was organized into "before" and "after" 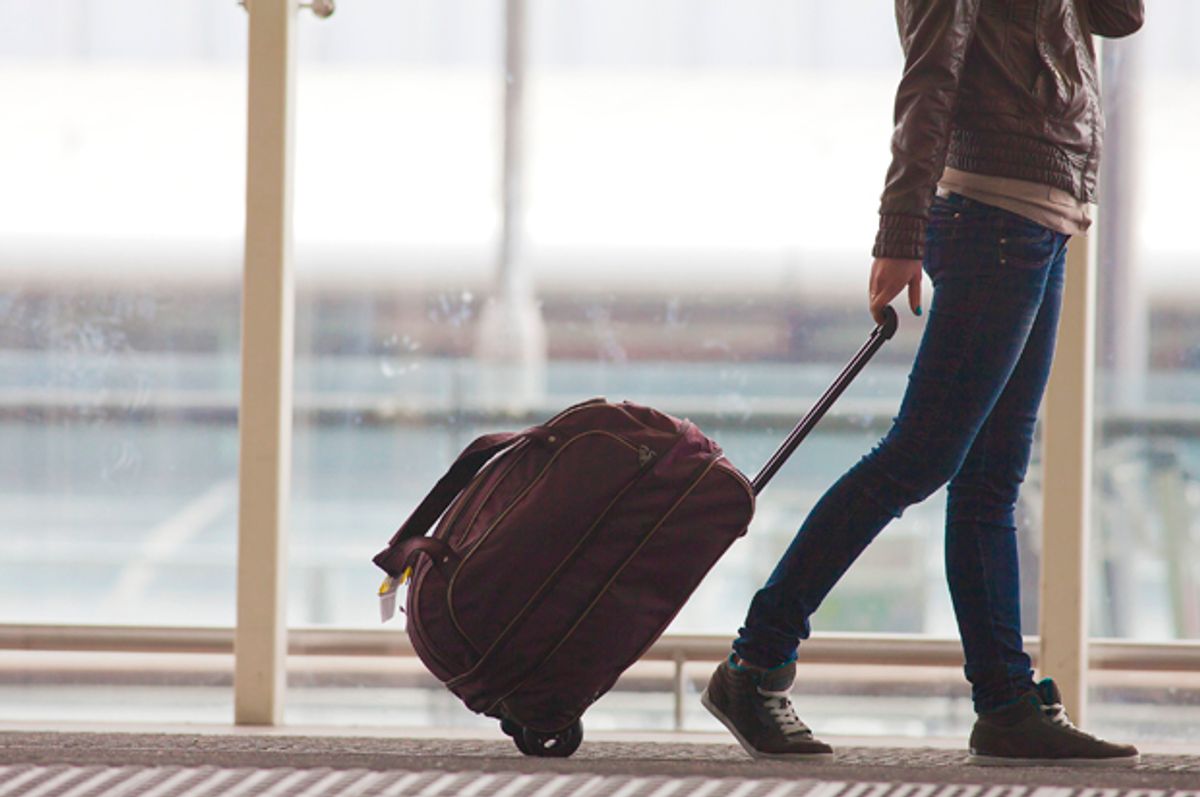 Excerpted with permission from "South of Forgiveness" by Thordis Elva and Tom Stranger. Copyright 2017, Skyhorse Publishing, Inc. Available for purchase on Amazon, Barnes & Noble and IndieBound.

The taxi picks me up at a quarter to five and takes me to the bus station, where I’m booked on the fly-bus. The grizzled taxi driver, hoisting my suitcase into the trunk with a smooth maneuver, asks me where I’m going. ‘No, to Cape Town,’ I reply, still in disbelief at my own words despite the time I’ve had to adjust to the idea. It would be an understatement to say that the proposed meeting has been on my mind. It’s reverberated in every step when I’ve gone out for a run; it’s been in every breath of cold winter air that scraped the insides of my lungs; it’s soaked the wet washcloth I used to clean my son’s sticky fingers. And I’ve tried my best to push it out of my mind when making love to my fiancé, enjoying his warm skin against mine.

After all, that would be a highly inappropriate time to be thinking about it.

From the moment the destination was set, I adapted to a new calendar — ‘before or after Cape Town’. The last time I bought deodorant I automatically deduced that I wouldn’t have to buy another one until ‘after Cape Town’. Yesterday, when snuggling down with my three-year-old son to do some painting together, spending quality time with him ‘BC’ momentarily appeased my guilt for leaving him for ten days to travel halfway across the globe to face a man from the past — without any guarantee of the outcome.

Something tells me that parents of young children are not meant to take such foolhardy decisions. That’s the reason I gave up my dreams of parachuting when I fell pregnant with my son. Then again, throwing myself out of an airplane at seven thousand feet carries less emotional risk than taking a trip down memory lane with the man who turned my existence upside down. Because it wasn’t an unknown lunatic who tore my life apart all those years ago. Who turned down the offer of medical help for me, even though I was barely conscious and vomiting convulsively. Who decided instead to rape me for two endless hours.

It was my first love.

Check in goes smoothly, but I don’t trust my suitcase to follow through to my final destination. In the past, it’s proven to be an adventurous traveler that jets off to Bali instead of accompanying me to respectable conferences in Finland, for example. Don’t even think about it, I mutter, and give my suitcase a stern look as it disappears behind the check-in assistant.

On the other side of the window, an airplane takes off and fills the dreary morning with a thundering rumble. Ever since my son was a baby, he’s had a fascination with airplanes, peering up at them through his long eyelashes, and drawing contrails in the sky with white finger paint. Unsurprisingly, it was the only thing he wanted me to paint for him yesterday. I produced something that looked more like a disfigured penguin than a plane, but my son was pleased. He pointed at the painting and stated proudly: ‘Uncle is in an airplane.’

A pang of guilt shot through me. My brother is, in fact, studying overseas, but since my son doesn’t understand the concept ‘abroad’, it was easier to tell him that his uncle is ‘in an airplane’. And that’s the explanation he’ll be fed while I’m on the other side of the globe seeking closure instead of being in the bosom of my family, organizing the Easter-egg hunt, and wiping chocolate dribbles from my son’s and stepdaughters’ chins.

Oblivious to my inner turmoil, my son, who has recently begun to confess his love to me, grabbed my face with paint-smeared hands. Tenderness welled up in his eyes as he uttered in a silky-soft voice: ‘Dearest Mommy.’

My heart ballooned inside my chest. ‘Yes, love?’

Gazing at me through his blonde eyelashes, like butterfly wings, he said: ‘Never lose Halifra.’

Although he’s reached the age of three and a half, he’s still prone to talking about himself in the third person, using the mispronunciation he invented when he was still too young to say his name — Haflidi Freyr — properly.

Swallowing hard, I wrapped my arms around him, buried my face in the crook of his neck, and whispered that I’ll never lose Haflidi Freyr, never ever. It was the most honest love confession to ever escape my lips.

Loosening my grip reluctantly, I forced myself to look him straight in the eye. ‘You know, Mommy will be getting on an airplane soon.’

His big eyes grew even wider, the dimples bouncing on his cheeks. ‘CAN I COME WITH?’

For a moment, the cat had my tongue. I’d anticipated a tantrum or even tears, but not the genuine hope that lit up my son’s face like a beacon on a winter’s night.

‘No honey, not this time. Maybe later, huh? You can come with Mommy on a plane later.’ I hugged him tightly. He pouted, his little arms dangling moodily from my grasp.

He’ll get over it, I thought to myself.

I was wrong. My son was unnerved and fussy for the rest of the evening and broke down crying when his father, Vidir, had the nerve to gaze lovingly at him and call him ‘munchkin’.

‘I AM NO MUNCHKIN!’ he screamed, tears of wrath spurting from his eyes. ‘I’M JUST HAFLIDI FREYR!’

Last night, as Vidir helped me finish packing my suitcase, the wailing from our son’s bedroom was so relentless that we decided to let him sleep in our bed, between us.

That is how I fell asleep on the eve of my trip to Cape Town: with my nose buried in the hair of a little boy who clutched my finger tightly and sobbed through restless dreams. I could barely make out Vidir’s silhouette in the dark, lying on the other side of our sleeping child. The last thought that went through my mind was how I had to be careful out there in the great, big world so I could return home to these two gems.

I’m waiting in line for the airport security screening when the double standard hits me. One failed attempt at a shoe bomb, and we all dutifully take off our shoes to ensure each other’s safety. Meanwhile, the average day greets enough perpetrators of rape to fill thousands of jumbo jets, according to global statistics. Yet there are no official security measures in place to fight that pandemic. To be fair, it’s not as easily solved as screening someone’s boots, I admit to myself.

My seatmates on the plane to Norway, the first layover on this mammoth trip, are an exceptionally well-behaved five-year-old girl and her mother. The chances that Haflidi would sit nice and still on a three-hour plane ride are non-existent, and I reward the girl with an encouraging smile. She hides under her mother’s arm, shy. It reminds me of my own mother, whose approval I desperately wanted before embarking on this journey.

Yes, I am aware that I am thirty-two years old.

It doesn’t change my childish need for my parents to bless my endeavors.

My mother’s eyes flew wide open when I told her that I was traveling alone to South Africa to meet up with the man who raped me when I was sixteen. She strung together a series of hair-raising worst-case scenarios before letting out a sigh, looking at me with loving reluctance, and adding: ‘But I know it’s pointless to try to talk you out of things you’ve set your mind to, dear.’ Shortly thereafter, my dad interrupted my packing when he dropped by for a coffee. Despite my attempt to break the news to him in the gentlest manner possible, it didn’t prevent him from freaking out. He lectured me in a thundering voice about how I was jeopardizing my life for an utterly ridiculous idea.

‘But I have to finish this chapter of my life,’ I said softly. My cheeks were on fire.

‘Finish this chapter?’ he repeated, appalled, and jumped out of his chair. ‘You don’t need to travel across the globe to finish anything! This whole idea is a big pretentious drama, that’s what it is!’

His words hit me right where it hurts.

‘You’ll have no control over anything. Nothing but your thoughts! Nothing else!’

‘What do you mean?’ I asked, confused. ‘I’ll obviously control my actions and whereabouts.’

‘No you won’t, dear,’ he hissed. ‘You can’t always. If you could, then that wouldn’t have happened.’

We both knew what he meant by ‘that’, even though we’ve never talked about the incident that changed everything. In recent years, I’ve spoken widely and publicly about my status as a rape survivor — yet my father and I have never discussed that fateful night. He has never asked, and I’ve always assumed he doesn’t want to know.

I sat up straight, aware of my glowing cheeks. ‘If you reduce me to victim and him to perpetrator, I can see how this seems incomprehensible to you. But we’re much more than that, Dad.’

He scoffed loudly before storming out of the kitchen.

I leant against the wall and let the air out of my lungs slowly. Goddamn it. I knew this would be hard, but bloody hell.

My father appeared again in the doorway, pacing up and down with frustration I knew was fueled by fatherly love. ‘How can you be sure you’ll finish anything with this nonsense? This may just as easily be the start of something else entirely!’ The distress in his voice made it sound like a threat.

I sat alone in the silence my father left behind him and watched the dust settle. In a way, I think we’re both right. This trip will surely mark an end to a certain chapter of my life. What sets me apart from my father is my belief that in the next chapter, I won’t be the victim any more.