A24 has ushered in a renaissance of bizarre indies that tap strange, headline-catching ideas for very good purposes 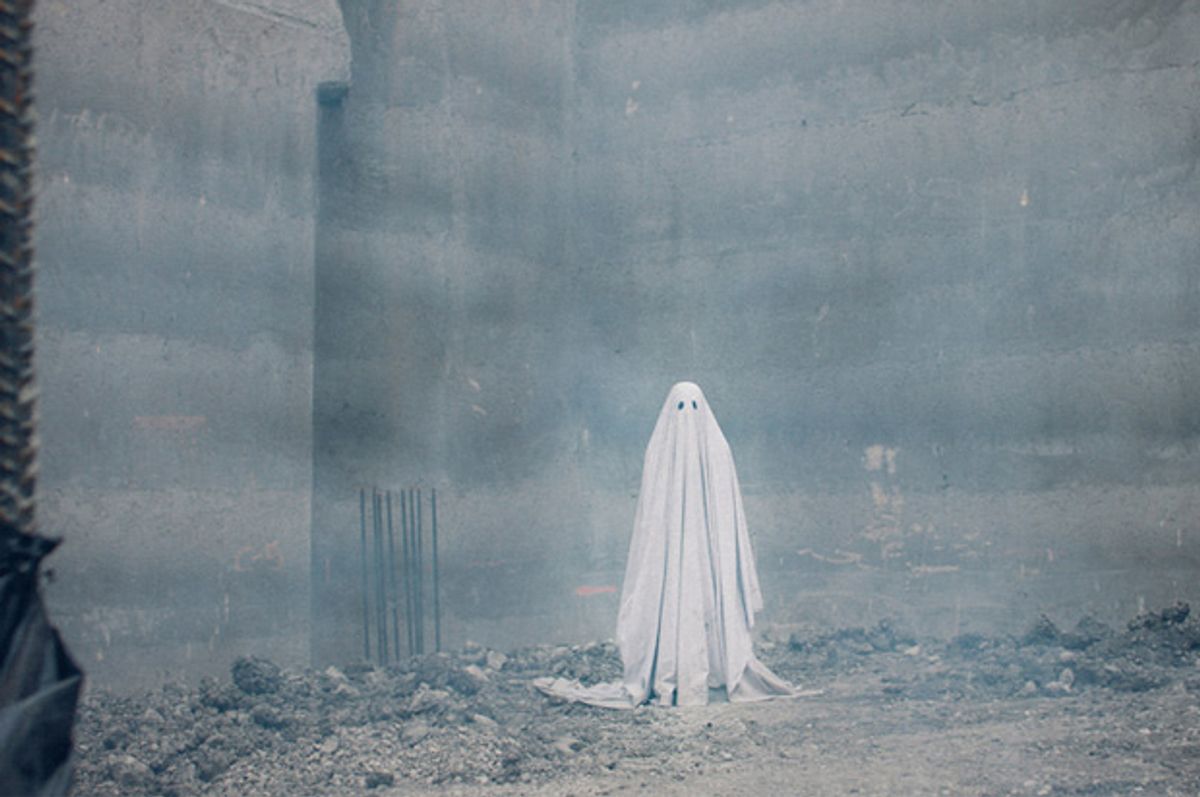 Director David Lowery’s newest feature, “A Ghost Story,” opened Friday, and if you’re aware of the film — which you probably are, considering the press has given it the sort of attention usually reserved for studio blockbusters — you probably know it roughly as “the one with the white-sheeted ghost.”

Indeed, the only image on the movie’s poster is of the ghost against a foggy black backdrop. The ghost is also the first image you see in the film’s trailer. To further promote the film, A24, the studio behind the movie, created an actual ghost store in Manhattan, where customers could pick up their very own tailored afterlife attire.

A ghost store has become par for A24's movie-marketing course. In 2015, the company promoted the horror film “The Witch” (which wound up earning $40 million) by holding events with the Satanic Temple and simultaneously flooding social media with accounts helmed by the film’s evil goat, Black Philip. Last year, A24 promoted its magical realist farting corpse movie, “Swiss Army Man,” by mailing bongs and beach towels emblazoned with the image of dead Manny (Daniel Radcliffe) to members of the press.

These ploys — ghost stores, satanic galas and mail-delivered bongs — are a new movie-marketing ripple, largely pioneered by A24 to bring the extraordinary to life. “The traditional marketing of [‘A Ghost Story’] would just be focusing on the cast and maybe the ghost would be this weird thing that surprises audiences,” said one of the film’s producers, Adam Donaghey.

While using that traditional approach to marketing might be less creative, it would make sense with "A Ghost Story." The film’s cast includes a recent Oscar winner, Casey Affleck, and a twice Oscar-nominated actress, Rooney Mara. That’s enough star power to get many enthusiasts to buy a ticket. But A24 essentially threw a sheet over the names, cut out two holes and said, “The strangeness is more important.”

And all indications are that they’re right. In the past couple of years, there has been a renaissance of strange indie movies. And rather than try to make the strangeness more palatable, A24 — and to an increasing extent, other companies — has leaned into the strangeness.

A24's recent output has included “Swiss Army Man” (“the farting corpse movie”),“Free Fire” (“the hour-long shootout flick”) and “The Lobster” (“the people-get-turned-into-animals-if-they-don’t-marry film”). Outside of the A24 canon, there’s been “the one where a faraway monster mimics Anne Hathaway’s movements,” “the one where Cate Blanchett plays 13 roles and voices various manifestos” and “the one about the girl and her super pig.” (Sidebar: How is it again that "Baby Driver" became the film that everyone’s pointing to as a beacon of cinematic originality?)

These films have not all been wild successes at the box office. Yet most have punched above their weight. “Swiss Army Man,” for instance, grossed $4.2 million, $1.2 million more than its $3 million budget. That’s nothing special, until you remember that it’s an utterly oddball farting corpse movie, directed by a pair of first-time film directors.

Miranda Bailey, who helped produce “Swiss Army Man,” told me that she doubts the film would’ve been the same cult sensation if not for the way A24 distributed it. “I think the success that 'Swiss Army Man' had had a lot to do with A24 and the way they put it up. I've made other movies that I think could've been successful that weren't handled properly, and then when you see ones that are handled properly it's always really great,” Bailey said.

A24 declined to comment, but the method behind its madness is simple. In a world saturated with content, they’ve culled a roster of films that stand out; they’ve then played up viral conceits to make deeply affecting and ambitious storytelling enticing. Though “Swiss Army Man” and “A Ghost Story” operate on completely polar tonal planes, at their core each is fundamentally a human drama about loneliness, love, mortality and existence.

“I think it's undeniable that if you're going to survive in this climate, or even poke out for the first time, you have to have something that really stands out and gets read and gets noticed,” reflected Daniel Kwan, who, with Daniel Scheinert, wrote and directed “Swiss Army Man.” “Which is kind of sad if it's used in the wrong way — like clickbait article titles and stuff like that. But when someone is able to intelligently harness that, and kind of use it as a Trojan horse to get to something meaningful, I think there's still a lot of worth in that.”

Kwan likened what’s happening to a creative evolution. “Whenever a new butterfly evolves with a crazier pattern, I'm sure that is going to help them spread. And I feel like all the filmmakers are just a bunch of butterflies trying to adapt and evolve and stand out and not get trampled and killed by the sea of content getting made.”

Indeed, Bailey was drawn to the unique pattern of “Swiss Army Man." “What attracted me [to ‘Swiss Army Man’] was that it was completely unique,” she said. “When you're talking about so much content out there, I think when something is fresh and new, then people like that.”

This is not to say that the respective filmmakers ginned up farting corpses and white-sheeted ghosts with an eye to marketing. These were not gimmicks, but genuine artistic choices. However, the landscape A24 helped create prized their out-of-the-box imagining. Lowery told me that “commercial viability was never on our minds. I never expected [‘A Ghost Story’] to appeal to anyone outside of a very limited number of folks in the indie film community.” But perhaps sometimes a butterfly thinks it’s a caterpillar until it begins to fly.