Can you define "appropriate attire?" The Speaker's Lobby dress code is a reminder that the sartorial is always political

Banishing women for bare shoulders is a power play. Female reporters should push back against vague House rules 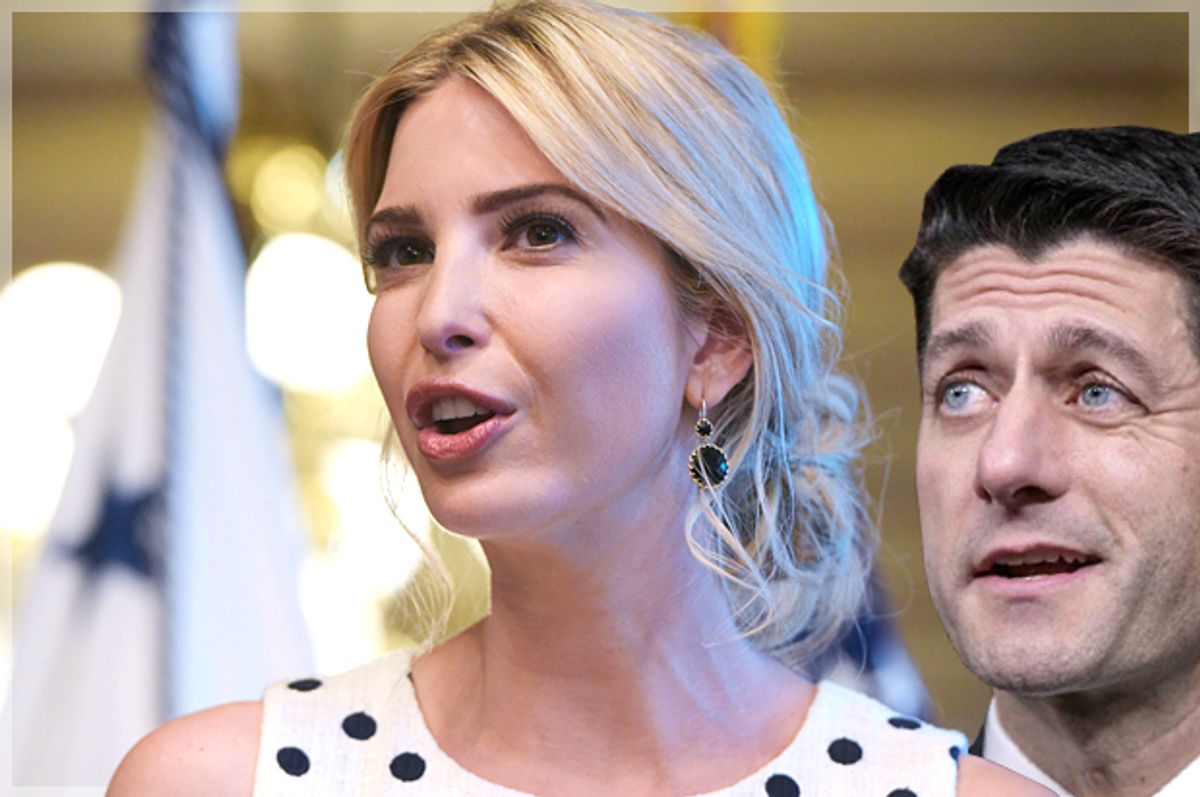 There’s a flashback scene early in the first season of Hulu’s “The Handmaid’s Tale,” as the U.S. transitions into the theocracy of Gilead, where June (Elisabeth Moss) and Moira (Samira Wiley) stop into their regular coffee shop after a run. They’re surprised to see a man, not the female barista they know, behind the counter, and his demeanor is anything but friendly. When June’s card is declined — we find out later that the government has locked women out of their own bank accounts — the barista turns overtly hostile. He calls them sluts and orders them out of the shop. The women, baffled, look at each other: What did they do to deserve that word and treatment? They’re wearing their regular workout clothes, t-shirts and shorts. The standard of appropriate attire and behavior for women in public had shifted — suddenly, violently, and authoritatively — and they were not prepared.

The Speaker’s Lobby, a room just outside of the House chamber in the U.S. Capitol, isn’t exactly Gilead — Paul Ryan still has work to do! — but female journalists have reported recently that they've run afoul of a vague dress code left wide open to interpretation and enforcement. That sleeveless outfits aren’t “appropriate attire” for work might come as a surprise to female journalists, who have made the sleeveless sheath dress so standard on TV newscasts that Slate ran a trend story on their ubiquity in 2013. Even Ivanka Trump, self-appointed doyenne of #WomenWhoWork, promotes them as office wear.

As CBS reports, the dress code includes no concrete parameters for women, which makes determination of what is and is not “appropriate” subject to the interpretation of House leadership:

The only specifics that exist -- and they're not extensive -- lie in Jefferson's Manual and Rules of the House of Representatives, which spells out the history of the somewhat vague guidelines. In the 96th Congress, then-Speaker Tip O'Neill, a Democrat, "announced that he considered as proper the customary and traditional attire for Members, including a coat and tie for male Members and appropriate attire for female Members," a 2015 edition of the manual said. It added that the House then adopted a resolution that required Members "to wear proper attire as determined by the Speaker."

Backlash to the complaints counter that the dress code, which also includes an unspoken ban on open-toed shoes, is neither sexist — men apparently wear a “tie of shame” if they roll in unprepared, after all — nor partisan, since former Speaker Nancy Pelosi, a Democrat, had been known to punish reporters for the same infractions. But that doesn’t mean the policing of what women wear to report on Congress isn’t political. Dress codes, other than those imposed for physical safety, are political, especially when their interpretation is left up to the judgment of those in power.

Don’t take my word for it. Ask a middle school girl who can’t wear a tank top to school because officials think she might be a “distraction” to the boys. Ask a young man who’s been told by a store owner he has to leave because he’s wearing a hoodie. Ask a black woman who’s been reprimanded by her white boss who has decided her hair is “unprofessional.” Today, yoga pants in school are often deemed inappropriate for girls; in the 1960s, girls had to fight to be allowed to wear pants to school at all. How do we decide what’s “appropriate?” Depends on who’s in charge.

“Appropriate” is a slippery word. The Latin root proprius — where we get “proper” and “property,” too — means “one’s own, special, particular, peculiar.” Our notions of what is and is not appropriate are therefore neither universal nor static — they are peculiar to specific times and places, and they are owned by those who control them, which means they can be used as tools to control others. This is why the right can freak out over Michelle Obama’s bare arms during her husband’s first congressional address but stay silent or even nod in approval at the appearance of Ivanka Trump’s bra strap, acts of hypocrisy that prompted pearl-clutching from the left. It's why a sleeveless sheath dress can be entirely appropriate to wear on camera to tell Paul Ryan’s constituents what he’s doing to dismantle their health care, but not to wear in the presence of the Speaker himself, or at least not in the lobby he controls. This is why invoking “one’s own” interpretation of what is appropriate for a female reporter to wear to work while the party in power is busy waging wars on both women and the press is a power play with meaning beyond a petty rebuke.

Yes, there are times in life when we should prioritize a dress code over our own comfort, namely when physical safety or respect for custom and the occasion are factors. Wear a hardhat on a construction site and rubber-soled shoes on the gym floor. Cover your head, or take off your shoes, or otherwise observe the conventions when visiting a house of worship. Attempt to match the general level of formality at a wedding, funeral or job interview.

But we should also be aware of how dress codes that are imposed from the top down can be used to put those with less power — or who threaten those who have it — in their place. There's nothing inappropriate about a woman's bare arms on Capitol Hill, and by now everyone should know that. What is inappropriate is imposing unreasonable and whimsical restrictions on women who are there to do a job that is vital to democracy: holding members of Congress accountable to the people they ostensibly serve.