The same absurd logic that swept Trump into the White House could bring us the Zuck. You shouldn't "like" this 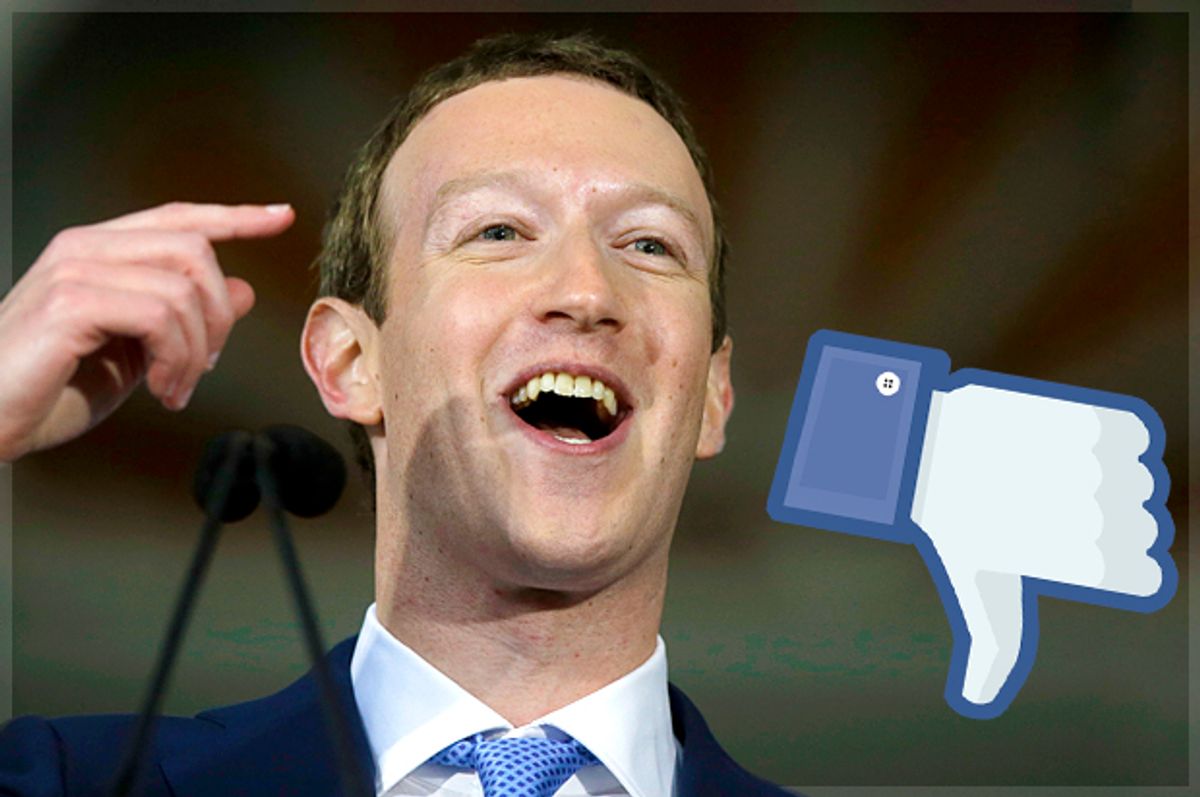 It’s becoming evident that Facebook CEO Mark Zuckerberg is either running for office or pretending like it. The boy-CEO spent the past few months touring the United States on a great American road trip, visiting churches and rehab centers, and generally mingling among the hoi polloi. “As I’ve traveled around, I’ve sat with children in juvenile detention and opioid addicts, who told me their lives could have turned out differently if they just had something to do, an after-school program or somewhere to go  … I’ve met factory workers who know their old jobs aren’t coming back and are trying to find their place,” Zuckerberg said.

As with many rich people — from Greg Gianforte to Donald Trump to Betsy DeVos — being rich is never enough. Zuckerberg apparently craves political power too.

To demonstrate to us that he's thinking very hard about this, Zuckerberg's most recent Facebook post even included policy prescriptions, as well as his observations on basic income, a beloved policy proposal of Silicon Valley elite that intersects with two basic techie beliefs: that their technologies will automate jobs, and that the free market is good and the government inefficient, and thus we’d be better off giving poor people free money than managing pesky social welfare programs.

The conviction that Zuckerberg is qualified to be a politician, and moreover would be a good one, relies on a shaky, circular brand of logic that is increasingly common in our market-obsessed society: the idea that the rich, by virtue of being rich, are therefore experts — not just in business, but in everything. It’s why Zuckerberg, who has no experience in education policy, believed he was uniquely situated to save Newark’s public schools with a $100 million donation that came with plenty of strings attached. Then-Mayor Cory Booker was happy to co-sign this vision. Needless to say, the project was a spectacular failure: All the wonks in the world couldn't fix Newark's schools from their ivory towers, and never bothered descending.

This circular logic — that the rich are rich, ergo they’re experts — is a partial explanation for Trump’s rise to power and why he was able to easily persuade so many to believe he was qualified to be president. This logic also explains why the rich start so many foundations, from the Bill Gates Foundation to the Chan-Zuckerberg Initiative to the Clinton Foundation. Said foundations may do some vital work in poverty alleviation, but they also promote an undemocratic vision of how the world works: You don’t decide how to run your schools, hospitals or even societies. Rather, the rich do it for you, via their policy analysts and grant managers.

“I don't believe in charity,” wrote Uruguyan novelist Eduardo Galeano. “I believe in solidarity. Charity is so vertical. It goes from the top to the bottom. Solidarity is horizontal. It respects the other person. I have a lot to learn from other people.” Charity is a means of control for people like Zuckerberg and Gates. It lets them implement undemocratic, top-down visions — with the imprint of their ideology.

This is essentially the definition of a technocrat, a label that fits Zuckerberg well. In his writing, Zuckerberg describes politics in labels infected with business-speak: The world is full of “problems” in search of solutions. Best to let the smart people at the top manage our worlds and dictate how things should be. You’d think that the Newark school debacle would have been a lesson for him that this doesn’t really work, but he seems unperturbed.

For more evidence of Zuckerberg's leadership skills and his views toward the masses, look no further than his business empire. Let's be clear about what Facebook really is: a business built on emotional manipulation of humans for profit. Facebook’s users are not consumers, they are the product, to paraphrase Douglas Rushkoff. Facebook makes money the more time that you spend staring at it — your eyeballs are being sold to advertisers—so its industrial psychologists experiment with how to get its users habituated and dependent on its platform as much as possible.

Despite various PR statements over the years, it is arguable that Facebook cares about its users' well-being whatsoever. When Facebook was in its infancy, Zuckerberg took a nonchalant view of all the private information that he was privy to. “If you ever need info about anyone at Harvard, just ask,” he told a friend. “They trust me. Dumb fucks.” Since then, the company has continued to take a cavalier view of its users’ privacy, vacuuming up every possible monetizable piece of user data — from your location, to status updates you start typing and then delete, to the position of your cursor — and saves it forever. It even creates shadow profiles of people who don’t have Facebook accounts, but whose friends have inadvertently uploaded their contact information to Facebook.

Privacy, generally, is bad for its bottom line: The more private information you give away and make public, the more the site knows about you, and the more profitable you are to advertisers. The Electronic Frontier Foundation has documented Facebook’s “shift away from privacy” over the past decade:

Since its incorporation just over five years ago, Facebook has undergone a remarkable transformation. When it started, it was a private space for communication with a group of your choice. Soon, it transformed into a platform where much of your information is public by default. Today, it has become a platform where you have no choice but to make certain information public, and this public information may be shared by Facebook with its partner websites and used to target ads.

If this is how Zuckerberg’s empire treats its subjects, it is hard to see how — or why — his attitude would change once he is in possession of political power. Zuckerberg’s "listening tour" was supposed to be some kind of project in public empathy, but if his attitude toward his social media subjects is any evidence, he seems incapable of learning empathy for us. We are merely manipulable sources of profit to be mined by his algorithms. It seems probable he’ll govern us in the same manner.