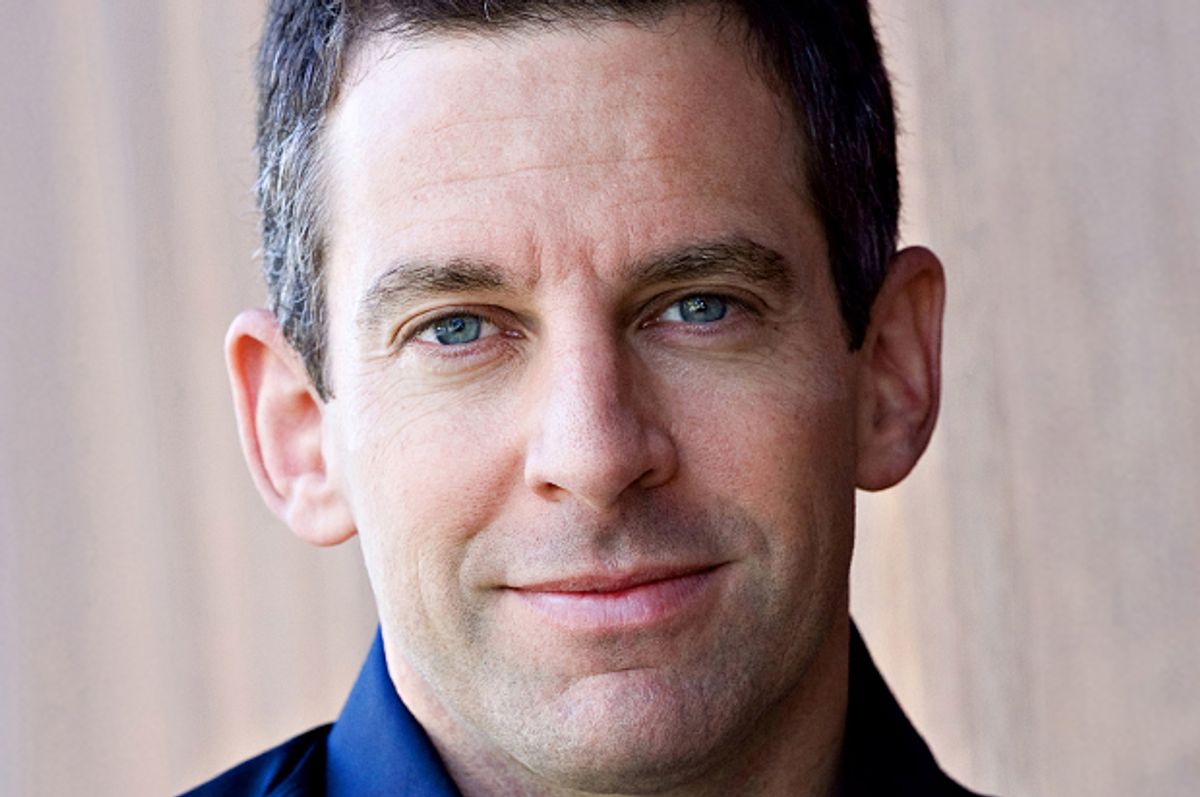 In a recent episode of his podcast "Waking Up," Sam Harris interviews the journalist Graeme Wood about the evolution and imminent collapse of the Islamic State, which we will derogatorily refer to as “Daesh.” Although there is much to admire in Harris’ treatment of Islamic extremism — for example, he correctly emphasizes that beliefs and actions are causally linked, a fact that seems to elude apologists like Reza Aslan — I was disappointed that the discussion seemed to imply that religion is the primary cause, if not the sole cause, of contemporary Islamic terrorism.

To set the stage, Harris occasionally hints that Western intervention has contributed to the emergence of radical Islam. Yet at other times he appears to suggest that religion is mostly or entirely to blame. Indeed, he has described it as “masochistic” to finger the West for the rise and proliferation of groups like al-Qaida and Daesh since the late 1980s.

This has unfortunately led him to some patently absurd views. For example, he once said that in a forced-choice situation between Ben Carson and Noam Chomsky for president, he would vote for Carson “every time.” Why? Because, Harris explains, Carson understands the true threat — namely Islam itself — whereas Chomsky is a “regressive leftist” who emphasizes both religious and political factors — a similar view to that espoused by Harris’ co-author and intellectual ally, Maajid Nawaz. Incidentally, at about the same time that Harris made this claim, Carson stood before an Israeli group and repeatedly mispronounced “Hamas” as “hummus,” while a New York Times article reported that some Carson advisers admitted that Carson could not grasp the basics of foreign policy. Yikes.

So I will admit that I don’t know exactly what Harris’ views are: The signals are too mixed for me to discern a single, coherent position on the topic. What can be said is that the amount of time allocated to blaming religion on his podcast greatly exceeds that allocated to analyzing politics. This asymmetry is enough for one to complain that Harris’ approach is misguided, if not in its intention then in its consequences.

What reasons do I have for claiming this? As Wood and Harris concur on the podcast, to understand the root causes of Islamic terrorists one should listen to the terrorists themselves. Yet if one does this, it becomes clear that politics really is an integral variable in the complex equation of motives that lead to terrorist acts. Only selective hearing could lead to an alternative conclusion.

Consider first the terrorist attack in the Bataclan in Paris. According to reports, the perpetrators with their crackling Kalashnikovs shouted two things at their victims: “Allahu Akbar” and “This is for Syria.” In doing this, they announced explicitly religio-political reasons for their homicidal rage.

Looking back to 1998, both Osama bin Laden and the current head of al-Qaida, Ayman al-Zawahiri, along with others signed a 1998 document called “The World Islamic Front’s Declaration,” which encourages Muslims “to kill the Americans and their allies — civilians and military.” Why? It specifies three explicit reasons: “the American troop presence in Saudi Arabia, the holiest of Muslim lands; aggressions against Iraq by the Crusader-Jewish alliance, including massacres of over one million Iraqis and devastating sanctions; and the occupation of Jerusalem by Israel.” These are explicitly political grievances, although they are crucially magnified (or made possible) by certain religious convictions, such as that Saudi Arabia is a “holy land.”

Furthermore, a document published in 2004 that’s been highly influential among Salafi-Jihadists in the Middle East called “The Management of Savagery” spends considerable time on all sorts of political issues. Its first section is even called “The order that has governed the world since the Sykes-Picot era.” The Sykes-Picot Agreement enabled the West to carve up the Middle East after the Ottoman Empire fell following World War I, and it has been an obsession of Daesh. As Malise Ruthven noted in the New York Review of Books in 2014, “when the jihadists of ISIS ... tweeted pictures of a bulldozer crashing through the earthen barrier that forms part of the frontier between Syria and Iraq, they announced — triumphantly — that they were destroying the ‘Sykes-Picot’ border.” Even the most recent caliph of Daesh, Abu Bakr al-Baghdadi, said in a 2014 speech, “This blessed advance will not stop until we hit the last nail in the coffin of the Sykes-Picot conspiracy.”

Some patriotic Americans like to shout “Never forget!” about 9/11. Well, the fanatics of ISIS feel the same way about the long record of Western meddling in the Middle East. And this is why Harris saying that he doesn't care about history to Omer Aziz in their marathon exchange is profoundly wrongheaded. The weight of history is felt throughout the Middle East in a way that it’s not here in the U.S. Just ask schoolchildren in Iran about Iran Air Flight 655, an atrocity that’s virtually unknown to Americans.

Historically speaking, the origins of Daesh can be traced back to Abu Musab al-Zarqawi, a violent goon who interpreted the 2003 U.S.-led invasion of Iraq as a fulfillment of apocalyptic prophesy. In fact, such apocalyptic thinking was largely dormant before the Iraq War. As Brookings Institution scholar Will McCants put it in an interview I conducted with him, “Prior to the U.S. invasion, the modern Sunni world was uninterested in apocalypticism.” With our “shock and awe” pre-emptive aggression, though, the region was set ablaze with eschatological fervor.

Today, apocalyptic belief is most widespread in the two countries most affected by U.S. jingoism, namely Afghanistan and Iraq, where 83 percent and 72 percent of respondents, respectively, believe the Mahdi’s return is imminent. (The Mahdi is Islam’s messianic figure who is prophesied to return shortly before the Last Hour.) Coincidence? I don’t think so. A Shiite fighter told Reuters in 2014 that “he knew he was living in the era of the Mahdi's return when the United States and Britain invaded Iraq in 2003.” In his words, “That was the first sign and then everything else followed. I was waiting for the day when I will fight in Syria. Thank God he chose me to be one of the Imam’s soldiers.”

One of the leading scholars of Islamic apocalypticism, David Cook, affirms this sentiment: “Many Iraqis harbor deep suspicions of U.S. intentions in their country, and there are frequent assertions in the apocalyptic literature produced in Iraq that state that the purpose of the U.S.-led invasion was to initiate an apocalyptic war — in this case, to find the Mahdi and to kill him.”

In 2003, the Iraqi cleric Muqtada al-Sadr established an apocalyptically-named Shia militia, the Mahdi Army, in direct response “to the U.S. invasion of Iraq,” to quote some Stanford University scholars. In Cook's words, members of the Mahdi Army likely also perceived the American invasion through an apocalyptic prism and consequently believed “that their mission [was] either literally to defend the Mahdi from American forces or figuratively to defend the Shiite community.” In both the Sunni and Shia communities, the Iraq war, arguably the biggest foreign policy blunder in American history, spurred large numbers of otherwise moderate Muslims to adopt radical, extremist interpretations of Islamic scripture — and prophecy.

The point is that it’s absolutely crucial to ask not only about the proximate causes of any given terrorist attack, but about the various conditions that can lead otherwise moderate individuals to adopt extremist ideologies. The fact is that wars, natural disasters, societal collapses and so on can increase the probability that radical beliefs will become both more intense and more ubiquitous. To quote the terrorism scholar Mark Juergensmeyer, “Catastrophes have often been the occasion for the rise of demagogues, strange sects and radical new religious movements,” including some with dangerously apocalyptic motives to, as it were, “save the world by destroying it.” This leads him to articulate the maxim that “radical times will breed radical religion.”

To put this point succinctly, political circumstances and religious ideologies reciprocally interact such that each can influence the other, sometimes resulting in a positive feedback loop of escalating radicalism and violence.

In fact, a Western military invasion of “Muslim lands” was precisely what bin Laden was hoping would happen after 9/11. Why? Because he believed that it would enhance recruitment. And the Iraq war most certainly did that, far more than bin Laden ever imagined; indeed, out of al-Qaida in Iraq emerged the far more ferocious, larger, better-funded, and apocalyptic Daesh. As Michael Morrell, the former acting director of the CIA, confirms, “there is ... no doubt that the Iraq war supported the al-Qaida narrative and helped spread the group's ideology" -- an ideology that morphed into the barbaric religious worldview of Daesh.

The concatenation of causes here doesn’t require squinting to see, yet there’s a persistent scotoma in the visual field of certain public intellectuals that prevents them from seeing the situation clearly, in all its religio-political complexity. Without a complete understanding of the dual causes of Islamic terrorism, the West will continue to fail in its efforts to snuff out the conflagration of Islamic extremism.

This is why I would implore Harris to “speak honestly” (to borrow one of his favorite rhetorical locutions) about what’s really going on: Yes, religion is a major driver of religious terrorism, but there are also societal circumstances that can fertilize the growth of extreme religious ideologies. It is not “masochistic” to blame the West’s protracted history of meddling in the Middle East for the current wave of ideologically-motivated violence, it is factual. Just ask the terrorists!

Even more, I worry that unbalanced conversations about terrorism and “Islam” (whatever that means exactly) contribute to a broader climate of irrational fear of terrorism — a fear that helped catapult Donald Trump into the Oval Office and within finger’s reach of the nuclear codes. In fact, a nontrivial contingent of Harris’ listening audience consists of alt-right-leaning Trump supporters, and this has spurred Harris to address them on a number of occasions about why Trump is a very bad man. Yet it is no surprise that such individuals are attracted to Harris’ message, given his problematic and nuance-free assertions, such as “We are at war with Islam."

It is healthy to remind ourselves that at its height, al-Qaida consisted of perhaps 500 to 1,000 individuals. Furthermore, the terrorism scholar Frances Flannery estimates that approximately 0.013 percent of all Muslims around the world are violent Islamists, and that “most of the designated terrorist groups in the U.S. are right-wing extremists, not Muslim.” As of this writing, the average American is literally more likely to die from a lightning strike than a terrorist attack.

Perspective on terrorism is desperately needed for an honest discussion to commence. Although I would argue that Harris’ picture of terrorism’s root causes is less incorrect than incomplete, this incompleteness is nonetheless damaging to our collective ability to neutralize the threat.