On paying for it: Ten cents a dance (adjusted for inflation)

Tango etiquette demands that men do the asking. When women outnumber men, I was often unpartnered. So I hired one 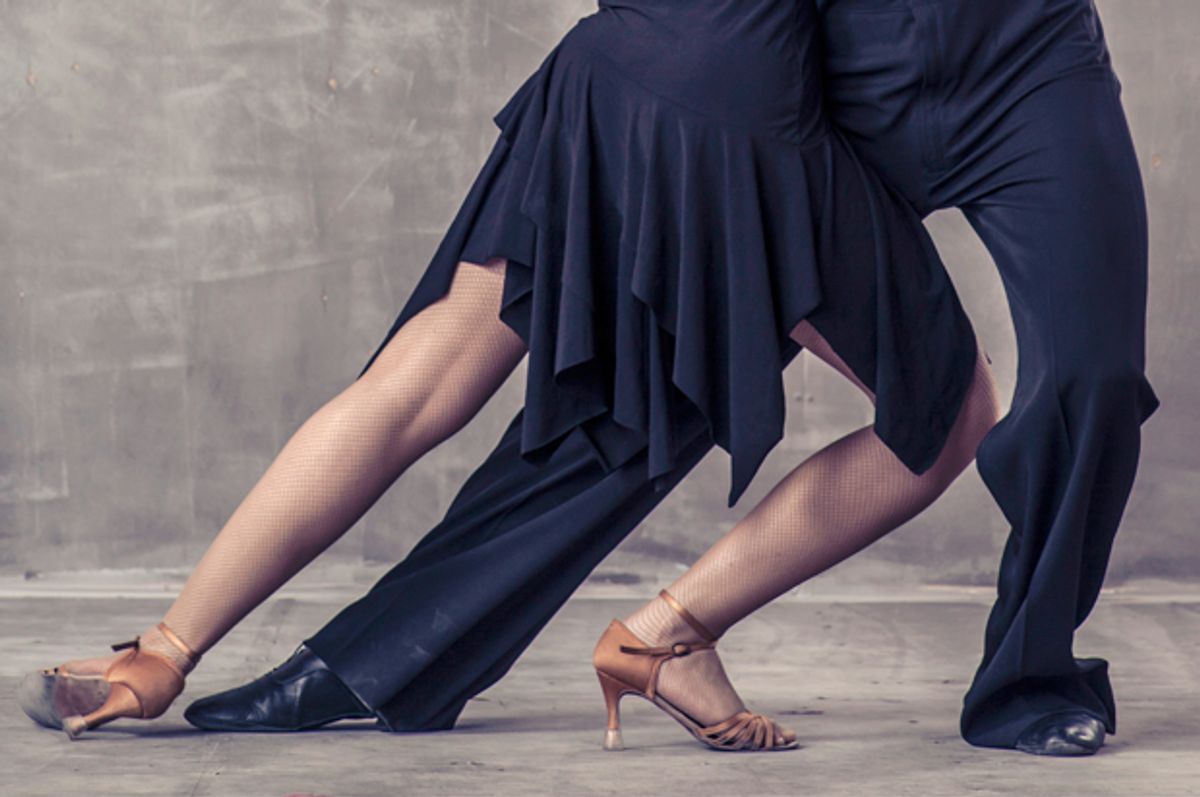 She was twice his age, her vermilion hair matched his red velvet suit, and her three-and-a-half-inch sparkly-gold tango shoes allowed her to peer over his head — by at least a foot. Who was he dancing with? His grandmother? His great-aunt?

It was one of those evenings of watching others dance tango, and spending a little too much time on the sidelines, not dancing — having not been asked. Tango etiquette has some antiquated rules of engagement, and the one that causes the most chafing is that men do the asking. If that weren’t problematic enough, combined with the lead-follow imbalance, the New York tango cliques, and the exclusive couples, it can all add up to doing some extra time on the bench.

That night, I had plenty of opportunity to track this truly odd couple as they circled the dance floor for yet another go-round. She had the air of an Upper East Side heiress, meticulously preserved, costumed in something beaded, asymmetrical, and slit halfway up her thigh. He looked like a grinning, dance-hall dandy, with a pencil-thin mustache, and penguin-like, as he sported a pair of black-and-white spectators. If he’d been wearing a hat, he’d have tipped it as they tangoed on by.

I asked the woman sitting next to me about the mismatched pair, who never split up, even though tango protocol states that you change partners after each set. “She hired him,” my bench-mate said. “She what?” I asked. “She hired him for the evening. They’re taxi dancing,” she said.

As it turns out, there’s a foolproof way to make sure that you’re not a tango wallflower. You can buy dancing insurance! It comes in the form of a partner for hire, a taxi dancer. A tango escort service, if you will.

During the 1920s and 1930s, taxi dancing was a popular ticket-a-dance arrangement that operated in closed dance halls. "Closed" in that female customers were not admitted, which opened the door for a new kind of non-domestic, urban job opportunity for unmarried working-class women. Dancing female employees. Male patrons would present a ticket to a chosen dance-hall hostess, and the pay-as-you-go, ten-cent agreement would last the length of a song. Taxi aptly, though indelicately, refers to renting her — on the meter — not unlike cab fare. This of course was considered a scandalous profession chosen by — you guessed it — morally corrupted women. Today, though, with morality up for grabs and corruption setting its sights on loftier goals, the notion of taxi dancing, once thought of as illicit, now seems quaint. Today, on the tango dance floor, faced with a dearth of good leads, hiring a male dancing escort just seems like a really good idea.

One night at a milonga (tango social) I asked my beloved teacher, Dante, if he felt pressured to dance with his students outside of class. Was he aware that some of his female students tracked him around the dance floor? Making sure they knew where he was, who he was dancing with, and then getting into position so when the music stopped, they’d just happen to be within asking-them-to-dance distance. Kind of, if not exactly like, what I was doing with him at that moment. I told him that I respected his right to have a tango social life, and while I didn’t expect him to dance with me beyond the studio, if he asked, I wouldn’t say no. “Nancy” he said, “There is a way that you can dance with me often, you know.” “How’s that?” I asked. “You can hire me,” he said.

Deal struck, and joy to be scheduled, Dante and I made a date to take our tango trade agreement out for a whirl. We met on a warm fall evening at my favorite outdoor milonga, Riverside Gypsy Tango, held at the Soldiers’ and Sailors’ Monument on the Upper West Side. Built atop a promontory, just north of the marble monument, and down a grand staircase is a charming, formal, amphitheatre-like terrace.

The balustraded balcony, surrounded by curved granite benches, sits high in a crown of trees. It’s a perfect place for contemplation, assignation, and Shakespeare reruns. Decked with 800 pounds of portable parquet flooring, it's perfect for Argentine tango.

We sat down on one of the stone benches to plot out our evening’s dance card. Milongas are carefully configured tango socials made up of dance sets, or tandas. Each set is composed of three or four songs of the same style of tango, and usually from the same orchestra. To signal the end of the set, a cortina, a 30-second piece of non-tango music, is played. This musical-chairs-like interlude is the time to change partners, pop a breath mint, go to the bar, or rest your dancing feet.

Dante suggested that spacing out our hour’s worth of tandas was a good strategy as it gave us each the chance to dance with others, and maybe avoid the appearance of a financial arrangement. But paying to play didn’t bother me — much. I was ready for a night of marvelous dancing in the arms of a smart, handsome, funny, sexy tanguero, who was a beautiful dancer and knew how to show a tanguera a good time.

The Argentine tango is a deceptive dance. From the outside, it can look like an intimate conversation that, once started, is best finished off the dance floor. Deeply woven in each other’s arms, lips brushed up against a cheek, and with its leg-entwining antics, you’d think the tango was all sex. What makes it so intoxicating, though, is that the tango is really an inside job -- a hypnotic, dancing meditation. The goal, and then the pleasure, is to dance as one, to tango’s time-honored steps, to be so merged that the separate self is abandoned. Well . . . kind of like sex.

Dante escorted me to the dance floor for the first set, a tango — the style of music that’s most associated with Argentine tango. All passion and pathos, and everything’s unrequited. It’s the kind of music that makes you want to put a knife through your heart right after you pulled it out of someone else’s. But because of, or in spite of its theatricality, we hammed it up a bit and engaged in a little pre-dance play-acting, my femme fatale to his debonair.

I’m at ease with tango’s defined lead/follow roles. To be in the arms of a strong, capable, leading man, and to then interpret (not follow) his lead can be thrilling. I’m often reminded of my mother’s shorthand gender studies proclamation “vive la differénce!” The four-song rapture ended, and as no crimes of passion were committed, we collected ourselves and waited for the music to begin again.

The next set was a vals tanda (waltz set). In the refuge of his embrace, watching the moonrise over his right shoulder, we danced, skipped, flowed and played, around and around again, to the seductive, rhythmic three-count melodies. The music was from the Golden Age of Tango, from the 1930s. It had the nostalgia of a Hollywood musical, all Fred and Ginger — and Dante made sure to throw in a dash of Gene.

Even though I’d bypassed the grand gesture of being asked to dance, and paid for the pleasure, the benefits are the same, if not better. Hiring Dante eliminated all of the game playing, the disappointment, the waiting to be asked, and some really bad tangos with leads that just can’t. I was insured for an evening of perfect tangos. Another bonus to dancing with an expert is that I become a better dancer. It’s a simple equation really; ease and confidence on the dance floor leads to a joyful, happy-looking tanguera, which leads to more invitations, which leads to less time on the bench.

After the second set, Dante took my arm as we returned to our seats. I felt flushed and had the slight ache of a permanent smile. I was elated from our 15 minutes worth of dancing intimacy. So euphoric, that I was startled that much more when I heard the woman sitting next to him say, “Are you dancing socially tonight?”

I dropped my head along with my already sunken shoulders. What she meant was, would he dance with her for free? What I’d heard was, she didn’t have to pay to dance with him.

Deflated, all my joy had been let out, and I wanted to sink into the granite bench with shame. But the stone seat wouldn’t allow for it. I was embarrassed that I’d had to pay for someone to dance with, and chagrinned to be middle-aged, and still single in a world that over-values the coupled.

All the times of loving and not being loved back enough, and all the years of not having a partner to bring home to my family and friends came rushing in. The times of tagging along, of being the guest who has to sleep on the single air mattress in the hallway, or the traveling singleton always having to pay the single supplement.

But enough of that.

I had dancing to do, and the next set was a milonga tanda, the completely fun and vibrant quick-step of tango — a step for every beat. I grabbed Dante and we traspied (double-stepped) our way onto the dance floor. It took me a few measures to regain my balance, and to remember the gift I’d given myself that evening: the joy of dancing tango by moonlight, with my teacher, my friend. It was more than a fair trade.

After the tanda, Dante told me that he was equally startled by her intrusion, and didn’t even know how to answer her question. He said that the genuine warmth he feels for the women with whom he taxi’s (and for me especially) places the transactional arrangement in the context of the social dance, and not exclusive of it. He said her entreaty was personally rude, and inelegantly in violation of the “filo dough pastry ritual” that is tango etiquette. Rules that exist, as he said, “not for artifice, but to preserve everyone’s dignity in a situation that is intimate, public, private and vulnerable.” When we were on a break, he asked her to dance anyway. He’d known her for many years and gave in to her arm-twisting. Much to his chivalrous credit, though, he told her that what he did on the dance floor and with whom was none of her business, regardless of how public the milonga is.

Brilliance and gallantry in dance shoes.

It was almost the end of the evening, the meter had run out, and I’d had enough tango to last until the next time. We settled up, and I wished Dante a good night. On my way out, I suggested that he go and ask a beautiful woman to dance.

Nancy Green is a product designer living in Hoboken, NJ. She blogs about dancing the tango, and other stories on and off the dance floor.