TNT's "Will" styles Shakespeare as a rock star, but wants for substance

This anachronistic period piece has a lust for life, but proves that all that glisters is not gold 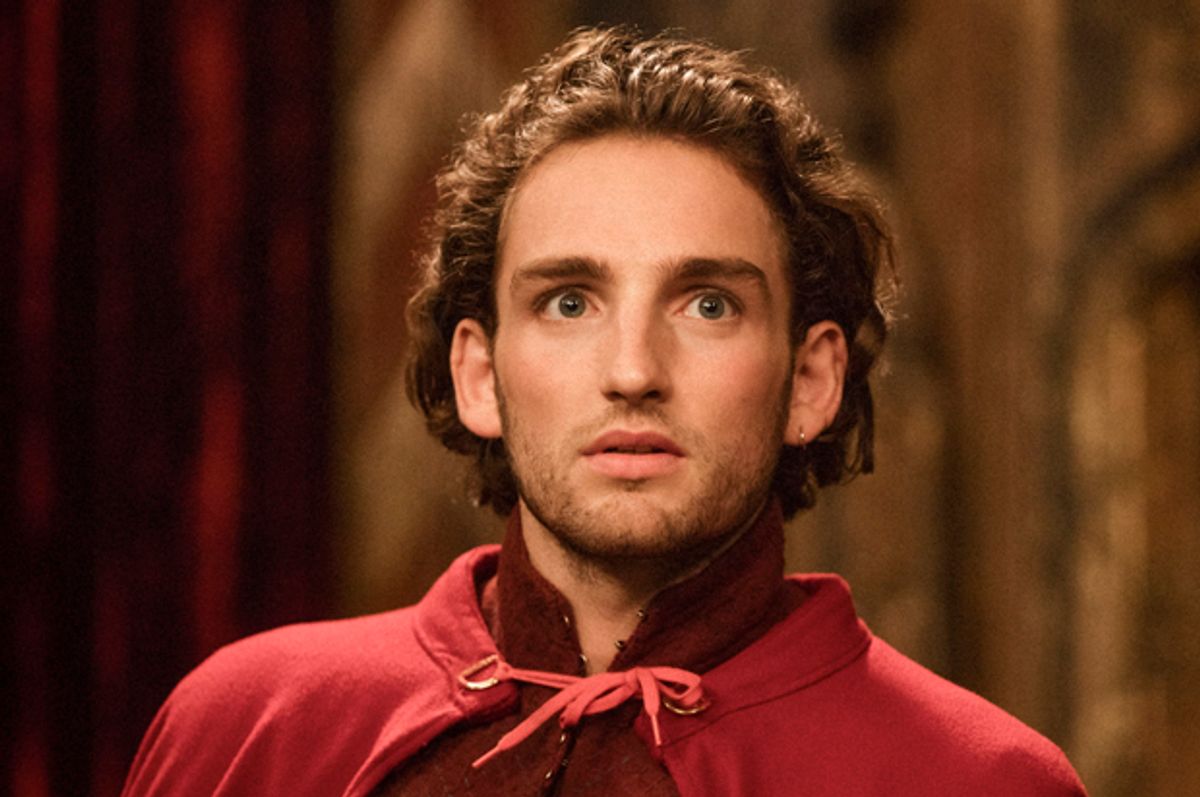 Laurie Davidson as William Shakespeare in "Will" (TNT/Aidan Monaghan)
--

Young William Shakespeare, as he’s imagined in TNT’s “Will,” will do anything to see his plays come to life onstage. He’s just as sure of his talent as his wife is sure that the family will starve before anything comes of it. So Will, played by British actor Laurie Davidson, leaves the ball and chain and their kids in Stratford-upon-Avon and saunters off to the big city as the Clash’s “London Calling” keeps pace with his steps.

The Bard's work is malleable and adaptable to any age. Consider how easily Baz Luhrmann’s 1996 film “Romeo + Juliet” transforms the Montagues and the Capulets into mobsters roaming Verona Beach, with Leo DiCaprio as Romeo and a Claire Danes playing his Juliet.

Little is known about Shakespeare himself, though, which opens the gates to any number of colorful fantasies. “Will,” premiering with two episodes airing back-to-back Monday at 9 p.m., is worlds away from the vision of playwright and poet seen in 1998’s “Shakespeare in Love.” Davidson lends a hunger and ache to the character that makes him stand out as more winsome than the peacocks and oafs surrounding him. Though not born great, his Will is driven to achieve greatness, and he just might have some greatness thrust upon him.

His Shakespeare is a curious explorer willing to risk all for his art but more dedicated to the craft than fame, although he certainly enjoys a taste of the latter. He styles new words and doesn’t apologize for doing so. He seeks the elevation of theater into something more than cheap, bawdy displays and bellowed theatrics. In his mind, reflecting life’s truths is the essence and duty of great stagecraft.

Next to his decadent rival and frenemy Christopher Marlowe (Jamie Campbell Bower, channeling a feline energy) Will appears to be guileless at times. And in this London, at a time when agents of the crown such as Richard Topcliffe (Ewen Bremner) are hunting down Catholics like Shakespeare, saying and writing the wrong messages can be dangerous.

Luhrmann’s longtime writing partner Craig Pearce created “Will” with a similar boisterous energy and style seen in “Romeo + Juliet,” though this setting is a London that is a carnival of mad hues and gigantic personalities, where the groundlings at the theater into which Shakespeare has inserted himself paint neon stripes on their faces and accessorize in leather and studs.

Injecting modern touches into historical tales is nothing new on television, of course, but for the most part it occurs in the flourishes. The CW’s recently ended production of “Reign” wove modern music into its Tudor time period with ease, as did “Underground.” Here, the year may be 1588, approximately — in “Will,” our hero is 24 years old — but the anachronistic employment of tunes by the Jam, Iggy Pop, the Sex Pistols and David Bowie are entirely appropriate in context.

Its costumes and set-ups are evidence of Pearce lifting the skirts on history a bit, though. James Burbage (Colm Meaney) may own his famous theater but behaves more like a band manager, while his son Richard (Mattias Inwood) lives the life of a carousing frontman. In one scene, Will is challenged to an improvised slam any MTV viewer recognizes as a rap battle. All the world’s the stage in “Will,” and all the men and women are either rock stars or prey for tyrants.

Describing pre-19th-century artists as “the rock stars of their time” is a timeworn tactic teachers and historians use in an effort to style the old into something edgy and appealing to bored students and others similarly disinclined to appreciate Shakespeare’s genius based on his masterful usage of iambic pentameter. How effectively such a designation contextualizes a historical figure or his work is unclear and greatly dependent on the artist in question; it probably doesn’t make youthful ears attuned to Lil Yachty more appreciative of Beethoven or Mozart.

At least it makes Pearce’s “Will” fun to watch, even if the action initially lacks for meaty purpose or true direction. There is intrigue in the very first episode, thanks to a desperate street rat (Lukas Rolfe) who discovers something about the writer that has the potential to make him a marked man, and Alice Burbage (Olivia DeJonge), the theater owner’s curious daughter.

But these opening episodes of “Will” heave with style at the expense of soul or substance. The real tension of the overall plot doesn’t kick in until the fourth episode, but before that the audience isn’t presented much to hang onto besides a surge of dirty, pretty visuals — and those baubles can only carry a story so far.

The performances in “Will” frequently veer into garishness; almost every one besides Davidson, Bower and Max Bennett, who plays Will’s cousin Robert Southwell, Catholic rebel, drowns the story in outsized portrayals.

This works tremendously onstage, emphasizing what bawdy misbegotten wrecks their plays are prior to Shakespeare’s arrival. But even offstage, the actors spray the air with spittle as they press their passion with explosively exhaled bluster. Then again, this makes the calmer chemistry between Davidson and DeJonge stand out in the scenes they share.

Midsummer is a season of carnivals, faires and a little madness, and “Will” undoubtedly captures that mood. Prestige drama it may not be, but it is true to a specific delirious vision that is a delight to behold — if an ephemeral one.