Dejuan Guillory, shot and killed by police, was a father and a human being

The Louisiana man, a father of 3, was killed July 6 by a sheriff's deputy during a traffic stop 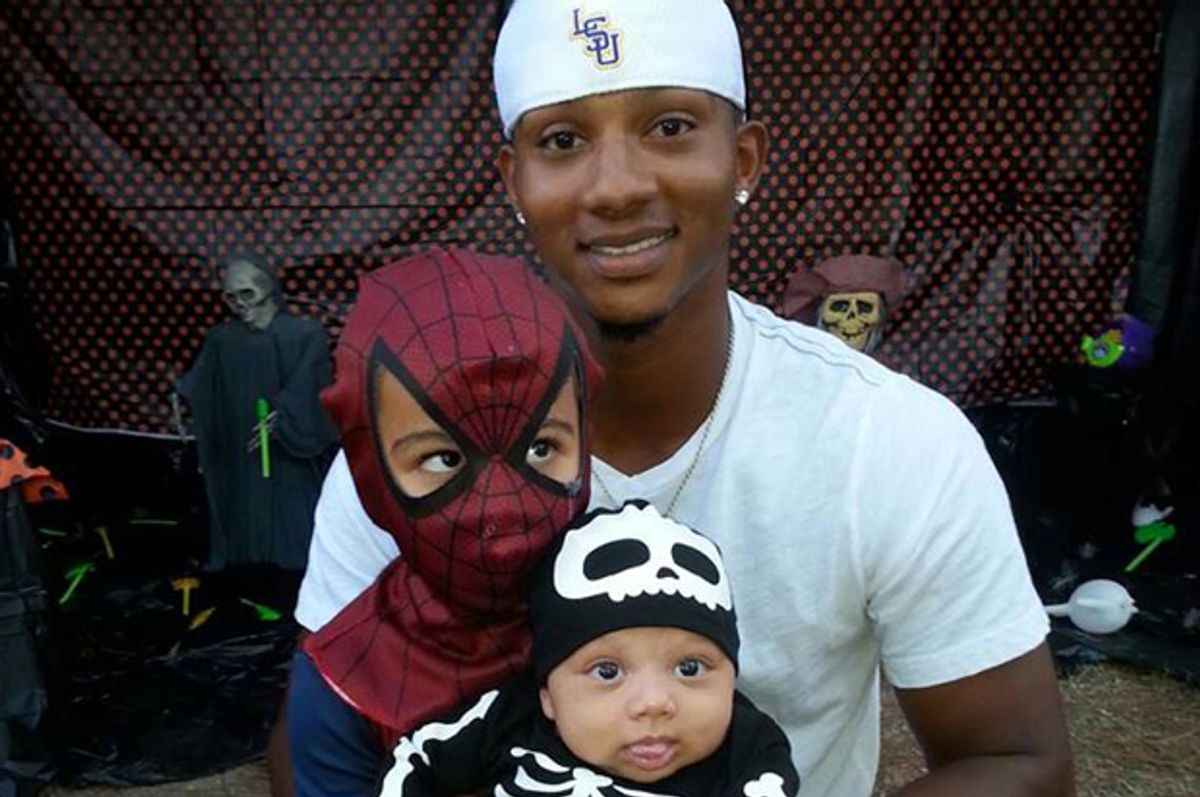 There's a picture of Dejuan Guillory making the rounds on social media — in it, he's smiling and holding two little kids in Halloween costumes — that has been stuck in my mind all day. Guillory, a father of three, was shot and killed by a sheriff's deputy in Mamou, Louisiana, on July 6. His death should infuriate you.

What if being your father’s son is your biggest honor? You walk like him, talk like him and even wear his smile. People dubbed you the younger version of him, and you well up with joy when the older dudes acknowledge you both as a team. Because you are a team — he’s the guy who made sure you always looked both ways before crossing the street. Your dad taught you how to hit that jump shot, and stayed on the court with you until you perfected your form. He also showed you how to guard your face in a fight, how to bob and weave, and to watch for the hook. He checked on you when he had to work late and surprised you at school with chicken nuggets on gray-meat taco day, because you hate gray-meat tacos. He has Pepto Bismol when your stomach hurts, jokes when you are down, and Wizards tickets when the Lakers come to town because he loves the Lakers, and you love them too because you are just like him.

My father and the fathers of my friends weren't perfect, but they were were ours, and their influence shaped our realities and allowed us to be brave enough to take chances that we probably wouldn’t have if they weren’t around. And since the conversation around black fathers and families, in this country where having black skin can feel illegal at times, has been contentious for decades, having a father active in your life as a kid could make you feel special. Guillory's family said he was great dad. That didn’t matter to the cop who took his life away.

Guillory, 27, was gunned down by a police officer on July 6. It started, according to the only witness — Guillory's girlfriend Dequince Brown, 21, who is currently in police custody — with a traffic stop that led to an argument.

According to an interview with Brown's attorney, Guillory and Brown were riding a four-wheeled ATV down a gravel road in rural Louisiana when a police officer pulled them over. Neither had identification. The exchange, according to attorney Joe Long, became heated and physical, with Guillory eventually backing off. The deputy ordered them onto the ground, says Long, with his weapon drawn.

"Guillory was on the ground on his belly with his hands behind his back. The officer had a gun trained at Guillory’s back, maybe a foot or two from Guillory’s body,” claimed Long. “They were still arguing back and forth, but Guillory was on the ground as directed, his hands were behind his back. He was not resisting. All of a sudden, a shot rang out, and Brown knew that Guillory had been shot. She then jumped on the officer’s back to stop him from killing Guillory."

Brown was charged with attempted first-degree murder of a police officer and remains in jail. The Ville Platte sheriff’s deputy has been placed on administrative leave. He will see his family again. Guillory won't.

I wonder what the deputy would say to Guillory’s sons now? I wonder if he would be able to look them in the face and tell them what exactly — his fear, his profession, his fragile masculinity, his incompetency? — made him snatch their father away from them? Probably not. More than likely, he’ll just offer the same lines that always get cops off after they shoot an unarmed civilian, something that translates into “even though he was unarmed and lying on the ground face down, he was black, so I feared for my life and followed my training, which tells me killing scary black people is legal.”

Black fathers, hug your sons and tell them that you love them every day. Too many police officers are still out of control.