Donald Trump Jr. crashes and burns: Supposedly smart presidential son finds himself at the center of the storm

President's eldest son is now a key player in the Russia inquiry. But is "Fredo" taking a fall for the family? 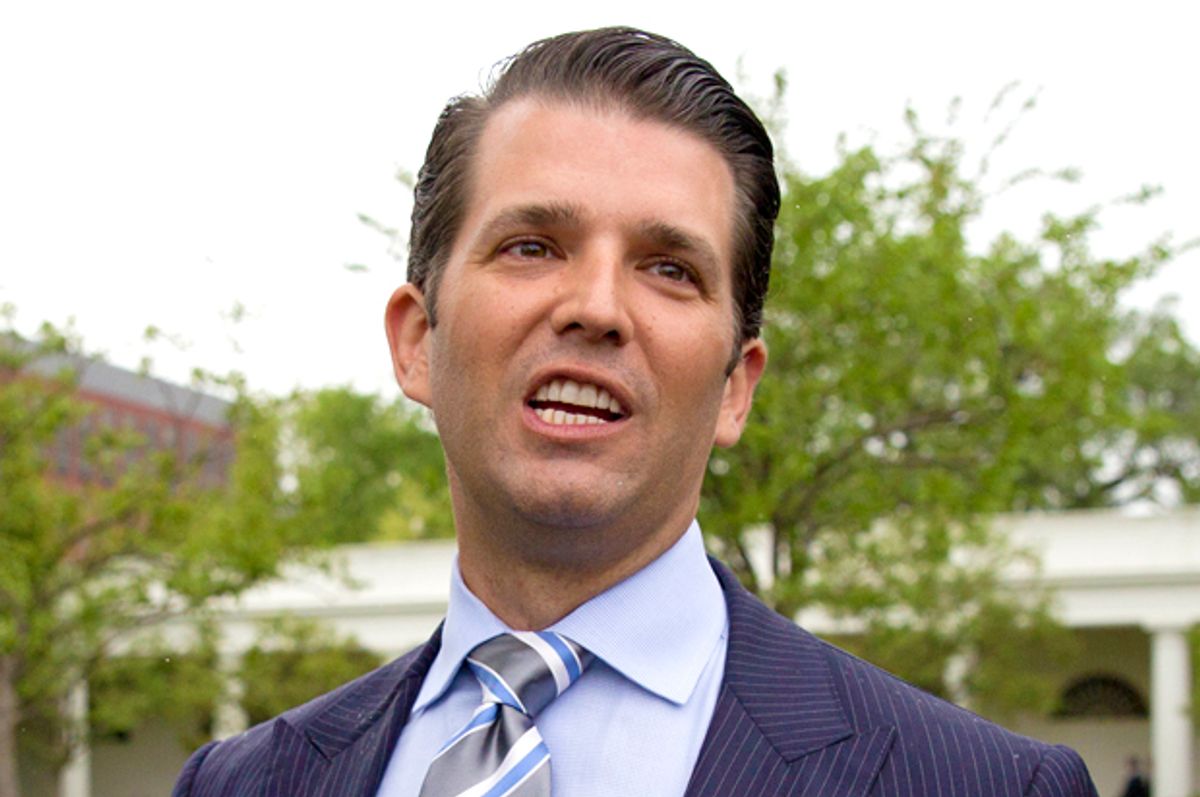 A big joke in political circles these days is that the Trumps are a mob family like the Corleones in "The Godfather" -- except that they are all Fredo, the anemic and inferior brother who betrays the family in a fit of pique. But if you had to pick one member of the family who has truly lost himself in that role it would have to be Donald Trump Jr. In fact, according to the Daily Beast, members of the Trump administration have been referring to him as "Fredo" for quite some time:

Ever since the campaign, a popular, behind-his-back nickname for Trump Jr. among some in his father’s political inner circle has been “Fredo,” referring to Fredo Corleone, the insecure and weak failure of a son in the "Godfather" series who ends up causing major damage to the crime family and contributing little of value. This has been relayed to The Daily Beast in several stories by Team Trump veterans over the past several weeks.

Personally, I had always thought Junior was the Sonny Corleone of the family, hot-headed and impulsive, aligning himself with alt-right characters and using Twitter as his preferred method of beating down those who made him angry. During the campaign there was a lot of gossip about his youthful problems with alcohol and his difficult relationship with his father. He was a troubled young man who grew up to become an aggressive and nasty political operator during his father's campaign.  I wrote about his ugly affiliations and racist proclivities last September, expressing my concern that the thuggish firstborn was planning a political career of his own.

The good news is that it looks as if we won't have to worry about that. The New York Times has published a series of reports over the weekend and on Monday revealing that in June of 2016, Donald Jr. had invited his brother-in-law Jared Kushner and the Trump campaign manager at the time, Paul Manafort, to a meeting with a Russian lawyer with ties to the Kremlin who promised to deliver dirt on Hillary Clinton. The reason people are calling him Fredo in this case is that the Trump scion has clumsily explained what happened by repeatedly changing his story and basically implicating himself in possible collusion.

On June 9, 2016, just two weeks after Donald Trump clinched the Republican nomination, Donald Jr. was contacted by a music publicist he'd met in Moscow who represented the "pop star" son of a Russian oligarch who had helped finance the 2013 Miss Universe pageant, which was owned at the time by the Trump Organization. The publicist, Rob Goldstone, told him that a Russian lawyer named Natalia Veselnitskaya had some "damaging information" on Hillary Clinton and wanted to meet with him.

Trump Jr. said that what Veselnitskaya offered was useless and vague and that she mainly wanted to talk about her mission to reverse the Magnitsky Act, a set of sanctions imposed on Russia as punishment for human rights violations. Those sanctions have made Russian President Vladimir Putin so angry that he blocked all American adoptions of Russian children.

When this meeting was reported by the Times, Donald Jr. first said the meeting had been called strictly to discuss the adoptions, which seemed an odd issue to require his attention. As the reporting developed, he changed his story to say that he took the meeting because he was told she would give him "information that individuals connected to Russia were funding the Democratic National Committee." Veselnitskaya denies she ever said anything at all about Hillary Clinton or the Democratic National Committee.

The fact that one of Trump's own sons, as well as his powerful White House adviser and son-in-law Jared Kushner and former campaign manager Paul Manafort, had all taken a meeting with a Kremlin-affiliated lawyer who promised to deliver damaging information about the Democratic nominee -- and had a specific request in return -- looks very much like what we might suppose collusion would look like. Despite all the allegedly forgettable meetings with Russians among Trump's inner circle, this is the first time we know there was an offer of campaign-related opposition research, along with a possible quid pro quo.

On Monday night the New York Times took this to a whole new level,  reporting that several sources have said that Goldstone the publicist sent Trump Jr. an email that explicitly said the material Veselnitskaya was offering "was part of a Russian government effort to aid his father’s candidacy." Trump Jr. had hired a lawyer earlier that day, who denied any wrongdoing on his client's behalf. But if that email exists, it shows that for more than a year Donald Trump Jr. knew that the Russian government had wanted to help his father get elected. The idea that he would never have mentioned this to him seems ... far-fetched.

There have been a lot of meetings with Russians that members of the Trump administration can't seem to remember having. This one was belatedly disclosed by Kushner and Manafort when they filled out their amended disclosure forms, although nobody knew what had been discussed in the meeting until now. The congressional committee investigators were also aware and were undoubtedly on the case. So, the White House knew the information was not going to stay contained -- which brings us to the Times' three anonymous sources for this story, which it reports are all close to the White House.

That's distinctly odd, and many observers have been getting a strange feeling about this story because of that. Who in the White House would want to hang Donald Trump Jr. out to dry? Chris Hayes and Sam Seder speculated on MSNBC's "All In" on Monday night that this particular maneuver is meant as cover for Jared Kushner, who is the one with legal liability for failing to disclose this meeting. The case against Trump Jr. is less clear, since he did not have an official role in the campaign and doesn't work for the government. So perhaps the White House figured that since the story was going to come out anyway he'd be a better choice to take the fall than Ivanka's beloved Jared, the son Donald Trump never had.

We know what happened to Fredo in the end, don't we?