“Insane in Moscow": The unbelievable but partly true story of the zany English publicist, the Azerbaijani pop sensation and the “high-quality” presidential offspring

Understand the Donald Trump Jr. scandal? Me neither! But Joel and Ethan Coen couldn't write a story this absurd 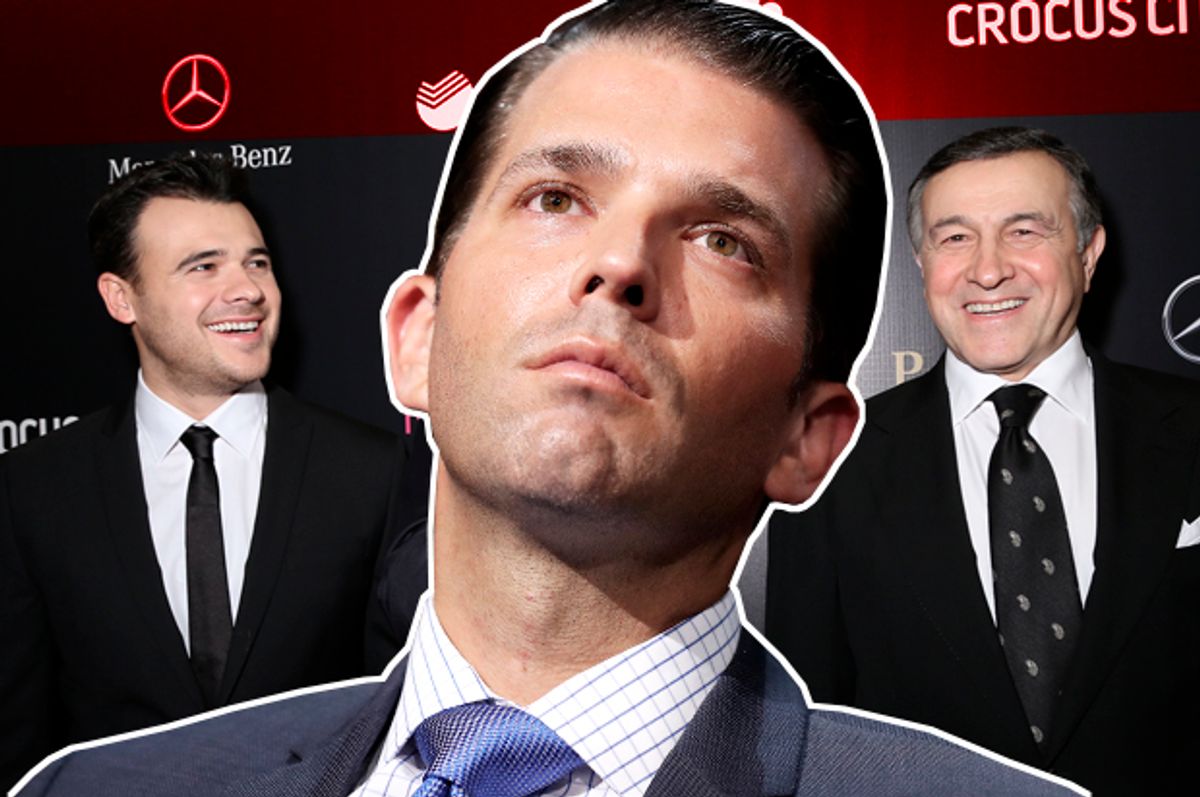 How can history repeat itself as farce when it’s farce in the first place?

In case you thought the cloud of scandal and drama surrounding President Donald Trump’s administration couldn’t get more bizarre, more absurd and more like a rejected storyline from a Coen brothers movie or a “South Park” episode — I mean, it couldn’t, right? Except it just did. Michael Flynn and James Comey are disappearing behind us in the rearview mirror, like a couple of faithful dogs left behind at the last rest stop on the Reality Turnpike, while the Trump scandal’s overcrowded clown car plunges off the outer edge of the known universe.

Those guys are yesterday’s news. Today’s news is about a self-trolling publicist who pronounced himself “Insane in Moscow” in a now-legendary Instagram post from the 2013 Miss Universe pageant, a schlock-spectacle that may — honest to Christ — be at the heart of this whole supposed mystery. It’s about a supremely mediocre Azerbaijani pop star whose dad was at one point going to be the principal investor in a Moscow Trump Tower project — and who has played a character named Jose Mamedov in his music videos, described as “Fearless and dangerous spy!”

How did we get here? And where are we? When it comes to the likely legal consequences and political fallout, who the hell knows? But we know this much: Donald Trump Jr., eldest son of the president of the United States (and supposedly the “smart one” among the male offspring), has now admitted he had a June 2016 meeting with an attorney he believed was connected to the Russian government, and who he believed had damaging information to offer about Hillary Clinton.

Now, the fact that Don Jr. has apparently made things worse for himself by releasing a bunch of self-incriminating emails he was under no obligation to disclose, thereby creating a whole new set of reasons for journalists to use the words “Clinton,” “email” and “scandal” in the same article — well, I don’t know where to go with that. It’s a really stupid example of historical irony, at any rate.

Is any of this evidence of collusion or conspiracy? I have no idea, so let’s let the serious-looking men and women in suits over in Bob Mueller’s office worry about that. Is it evidence of a mind-boggling level of cluelessness, incompetence and narcissism? Honey, we are just getting started.

Donald Jr. was apparently lured into this meeting, not that it took a whole lot of luring, by a British celebrity publicist and former tabloid journalist named Rob Goldstone, and it is with this guy that the whole story tips over from the realm of the unlikely into the realm of the blatantly impossible. You could argue that Donald Trump Jr. comes close to caricature at times, am I right? He seems like an overplayed supporting character from “The Big Short” or “The Wolf of Wall Street,” complete with his awkward teenage past, retro Charlie Sheen ‘do and numerous photographs with large dead animals. But Rob Goldstone is on another level entirely.

Rob Goldstone is beautiful. Rob Goldstone is magic. Rob Goldstone is a person who owns a P.R. agency that gives off a strong vibe of “we make porn” and has a picture of himself in a panda suit atop his now-shuttered Instagram feed. (In fairness, Goldstone is not a “furry,” I don’t think. He’s a fan of the British kids’ TV character Andy Pandy. Maybe that’s worse!) If Rob Goldstone didn’t exist, nobody would dare make him up. If this guy — a meta-British sketch-comedy character who seems to be played by Eddie Izzard, playing Benny Hill — with his social-media feed of whimsical headwear, his impromptu cruise-ship song-and-dance routine and his spurious connections to grade-B celebrities, is actually a key player in the Trump-Russia scandal, then there is a God. And She has a vicious sense of humor.

If Goldstone plays a role in the story about the Trump campaign’s byzantine connections to Vladimir Putin and the Russian government -- and the evidence points indisputably toward the conclusion that he does -- then that story is nothing like a John le Carré thriller. It’s a lot more like Joel and Ethan Coen’s underappreciated 2008 farce “Burn After Reading,” the one in which Brad Pitt plays a vain personal trainer named Chad Feldheimer who tries to run an idiotic extortion scam on the CIA (and — spoiler! — does not quite succeed).

Goldstone appears to be the connective tissue between the Trump family and Emin Agalarov, the aforementioned Azerbaijani pop star — on whose behalf Goldstone reportedly arranged the meeting between Donald Trump Jr. and Russian attorney Natalia Veselnitskaya, who may or may not be connected to the Kremlin and may or may not have claimed she had dirt on Hillary Clinton.

Why did Emin Agalarov — a profoundly forgettable performer of dentist-level good looks, whose 2013 video for his purported hit song “In Another Life” features an “Apprentice”-style cameo appearance by Donald Trump — want those people to meet? I’m sorry, but you’ll have to ask someone who can follow the plot. I’m too distracted by the details in the background, including the fact that Emin’s dad, a real estate zillionaire and would-be Trump partner named Aras Agalarov, once rented Gianni Versace’s former Miami mansion for a New Year’s party headlined by one-time one-hit wonder Lou Bega, he of “Mambo No. 5.” Or that Donald Trump sent Emin a video greeting for the latter's 35th birthday that closed with "and, boy, can you entertain!"

It also appears that Aras Agalarov and Donald Trump (meaning the current president, not his son) had a dinner meeting at the Moscow branch of Nobu, around the time of the Trump-owned 2013 Miss Universe pageant, that also included Herman Gref, the CEO of Russia’s largest bank and a close ally of Vladimir Putin. Could whatever went down at that dinner, or during the delirious pee-tape-type excess of that beauty pageant, have something to do with what happened during the 2016 campaign? Whatever that was.

Well, we just don’t know, now do we? We do know that on Tuesday President Trump described his eldest son as a “high-quality person,” rather as if he didn’t know him that well or was recommending an accountant he had used a few times or a set of really nice sheets. Perhaps the president is perturbed that Donald Jr. appears to have blundered his way into creating the most scandalous news moment of the Trump presidency, which is really saying something. But I prefer to take Dad at his word: Only a person of unusual qualities could have introduced us to Rob Goldstone and Jose Mamedov, and by doing so have revealed the truly outlandish, farcical and tragic nature of America’s political reality in 2017.