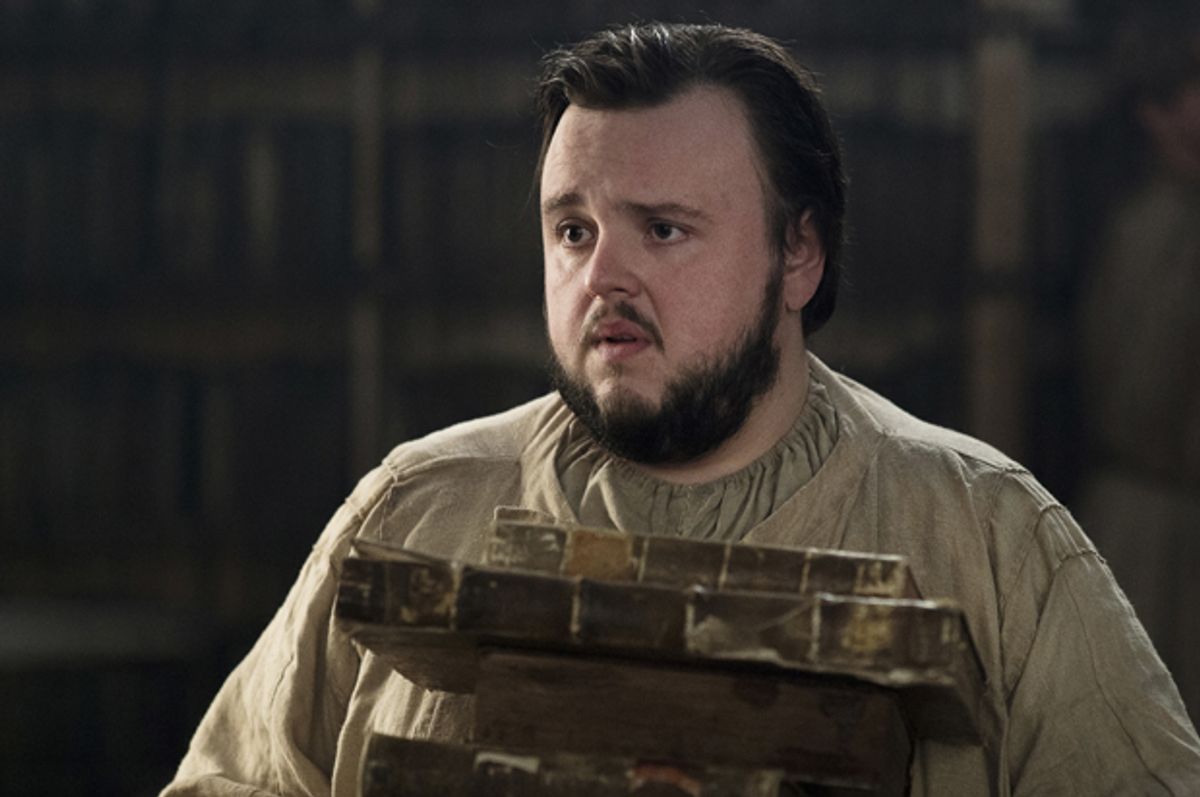 Truly it has already been a banner week for America’s foremost professional opinion writers. First, David Brooks sought to illustrate the widening gulf between the haves and have nots by telling the tragic tale of what happened when “he took a friend with only a high school degree to lunch.” Brooks recounted her bewilderment – nay, shame! – at being confronted by a selection of cured Italian meats she clearly didn’t understand.

And today, The Week’s national correspondent Matthew Walther is warning us in the days leading up to the seventh season debut of HBO’s “Game of Thrones” of his important discovery that watching it “was endangering [his] immortal soul.”

Reminder: it is only Wednesday.

At this point, writing anything about HBO’s international blockbuster that hasn’t already been discussed and debated extensively is incredibly difficult. Take it from someone whose brain has been spinning in an attempt to figure out anything vaguely new to say on the show for the past couple of weeks. So there’s absolutely nothing wrong with a solid contrarian take to balance out all the salivating hype.

But Walther’s view isn’t new or thoughtful or even intellectually sound. “What does it say about our culture and the state of the souls of millions who participate in it that anyone could find any of this even mildly diverting, much less praise it as a triumph of man's creative energies and subject it to endless hours of analysis and speculation?” Walther asks. What indeed?

The idea that “Game of Thrones” is endangering our very souls echoes 1980s-style “Satanic Panic” that sought to brand heavy metal and Dungeons & Dragons as tools of Satan. But this is merely a lure, because the deeper intent of the piece is to indict the rise of nerd culture — ergo, my people — for the decline of America and, indeed, civilization itself.

Let it be known that “Game of Thrones” has many, many flaws. Critics and agitated viewers have flamed its creators and executive producers D.B. Weiss and David Benioff as well as HBO time and again over the drama’s employment of sexual violence as a titillating plot device and lazy exploitation female sexuality in general. And rightly so.

“Game of Thrones” also has taken knocks for heavily relying on brutality in general for its plot development, especially in its over-emphasis of it in characters such as Ramsay Bolton, whose exploits Walther refers to in a summation of his fatigue with the show at the end of his column.

Yes, there are many reasons to be over and done with Westeros. I get it.

But according to Walther, the worldwide obsession with George R.R. Martin’s universe and fantasy in general is indicative of general decline in cultural intelligence.

“There is a deeper sense in which the old problems that were the hallmark of realist fiction and drama — the old stand-bys of morals, manners, marriage, and money — are simply not interesting to people who are not emotionally mature enough to engage with them. “

Yes, that would be true if it weren’t for the fact that all of these “hallmarks of realist fiction” are explored in "Game of Thrones." The Starks and Tullys are nothing if not a family bound (and gagged and strangled) by their insistent adherence to morality and manners. Marriage? Money? Lannisters and Tyrells, anyone? The entire series exists as historical and political allegory. Then again, you’d have to be familiar with how ugly and brutish history and politics are when you sweep aside the niceties and peer at the roaches scurrying beneath the rushes.

But what do I know? I’m just a video game player who happens to be more than 30 years old and who read every book that begins with some variation of "Harry Potter and the. . .,” and has some familiarity with the Wars of the Roses. Mind you, I’ve also read many more novels than that “fable about talking animals that [Americans] were assigned in middle school.” By that I’m guessing he’s referring to George Orwell’s “Animal Farm”?

Yes, George Orwell – what a simplistic dullard. Ditto “Harry Potter” author J.K. Rowling. I mean, sure, she meticulously built an entire universe and mythology that entertainingly serves as cautionary tale about the banality of evil and how common political and bureaucratic structures can be manipulated to give rise to fascism. But she also calls non-magical beings muggles. Duh!

What a simpleton, and what rubes we all are for enjoying her books, to say nothing the worlds of Marvel and DC Comics that are currently dominating the box office and television.

Things are bad, Walther says, because nerds like Rowling and Martin and Stan Lee and D.B. Weiss and David Benioff are making wizard porn. Not because our educational budgets are being gutted. Not because the very people who profess to be concerned about America’s immortal soul threw their weight behind a man who brags about grabbing women’s genitalia. By the way, that man utters far worse things about women than many “Game of Thrones” characters ever said about Brienne of Tarth, “the woman whose size makes her the frequent butt of bestiality-related jokes.” Brienne, Walther does not add, stands as a symbol of fortitude, dignity and moral righteousness to many a spiritually compromised “Game of Thrones” viewer. Obviously her presence does not count.

Two decades ago, Walther opines, watching this show would have gotten you shoved into a locker. He’s right. But nowadays, the people who would have been on the receiving end of that shove are shaping culture in fascinating ways. Millions of people see that as a positive, desirable development. And if Walther doesn’t want to be a part of that, fine. Nobody’s forcing him or anyone else to join in this game.