At a press conference for their upcoming fight, the two combatants played old hype games with very untimely results 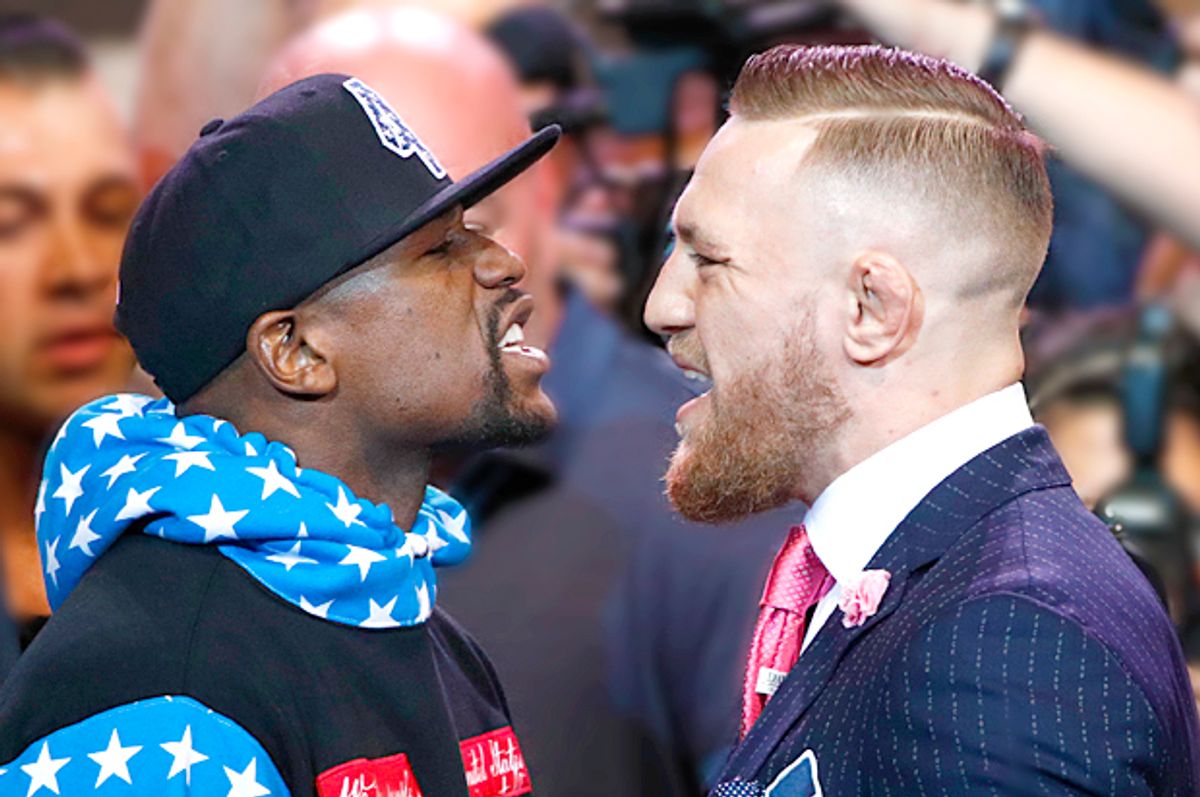 Pre-fight press events in the world of boxing tend to follow a familiar, hoary script: fighters boast about their prowess; one or the both throw down a few personal attacks; the two stare each other in the eyes for an uncomfortably long period; the combatants do their best to offer up the illusion that the whole carefully orchestrated moment could break out into out-of-the-ring physical violence. It's the way these things work.

All of that was on display when boxing great Floyd Mayweather Jr. shared the stage with the sensational MMA fighter Conor McGregor at the first press event of what will be a week of constant, breathless promotion for their August 26 match. Perhaps it was a little bit flashier and ornery than such press showings have been in the past, perhaps a little more explicit (for instance, the Irish McGregor wore a sharp bespoke suit whose pinstripes read "fuck you").

This was all predictable. Both fighters more or less adopt the character of the wresting "heel" — the evil, flamboyant self-promoting bore of the ring. Their face-off was bound to lack breathable air. As well, the two are promoting a novelty fight — the confrontation of a near-retired, highly technical champ and a dashing if uneven comet from another sport — that is itself almost all promotion and hype (the mismatch is almost self-consciously a marketing stunt).

For all these reasons and more, face-offs and weigh-ins around this bout were bound to tap into overblown reality-TV drama while following the very traditional, very old rhythm of boxing promotion. Even the new ripple of the contemptible, Trumpian MMA UFC President attempting to squeeze is grinning face into every photograph and video angle available during the event echoes the behavior of boxing's own Don King (another loutish friend of the president). As novel as it all may seem, this promotional tour is simply a high-def version of boxing's historical norm.

So it was not, in these terms, all that surprising when the flashy McGregor — who is both the aggressor and the underdog — tapped into the old boxing vein of race baiting.

"Dance for me, boy," said the white McGregor to the black Mayweather Jr. in a vicious echo of past and current strains of American racism (clearly, the Irishman has studied up on our local history)."Dance for me, boy" — if you can't see the deep historical problems in that sentence, what it is and what it recalls, then I don't know how to even talk to you. You need to know better before you respond.

Twitter exploded — as it would — even as Floyd Mayweather Sr. denied the bigoted overtones of the statement.

It would be one thing to wring our hands about this and call McGregor a racist (he's said similar things before and his entire public presence is steeped in the kind of Irish nationalism a certain set of white Americans eat with a spoon). Perhaps we should do that.

But that's not the whole of it. As said, race baiting has been common enough in boxing promotion that even The Greatest, Muhammed Ali, indulged in it, flipping in between casting his black opponent Joe Frazier as an "Uncle Tom" and a "gorilla". Ali wasn't a racist by any means — just a canny promoter using old tools in new ways. In his era, this was predictable if perhaps not acceptable.

But we live in a different era now, and McGregor, who's shown graceful promotion of queer rights in the past, shouldn't be using such tools regardless of his personal, private racial positions (his public ones attached to his fully fabricated public persona speak volumes about his possible bigotry). No one should.

Throughout the event, McGregor tried to imply that he was more wealthy than Mayweather Jr. (he's not), more prepared (nope) and even the better boxer (oh God no). This was all counterfactual and, honestly, really dumb (to be fair, the whole of Mayweather Jr. vs. McGregor is itself titanically dumb). Yet it was part of the show.

It's likely McGregor didn't believe a word he was saying about almost anything. No fully rational person should or, hopefully, would. Really, if you watch this video and still think that McGregor, regardless of his two-inch reach advantage, is more prepared and able than Mayweather Jr., you're approaching the world from a radically divergent conceptual framework.

It might be, at least from McGregor's standpoint, that the fighter was just playing the game as it's meant to be played and as it has been played since long before the days of Jack Johnson and the time when pugilists not unlike the former multi-belt UFC camp spoiled against each other before bare-knuckle, unsanctioned bouts in warehouses and barns all over Ireland. The gloves were off verbally as well back then — families and backgrounds, racial and otherwise, were fair game.

But that's no excuse. That's not where we're at now. In a moment when a sitting president refers to over 12 percent of the population as "the blacks" and another 16 percent as "rapists. And some, I assume, are good people," it's well-past time to retire this particular part of boxing's promotional script and, yes, start judging the people who use it so cynically, McGregor included.

And still, I have no doubt that McGregor will remain the boorish champion of many, both racist and otherwise. After all, he's the white, more colorful, fresher heel in a two-villain narrative, and his crimes pale in comparison to Mayweather Jr.'s.