A trillion-ton iceberg broke off from Antarctica

The Larsen-C iceberg is roughly the size of Delaware, and it broke off of Antarctica 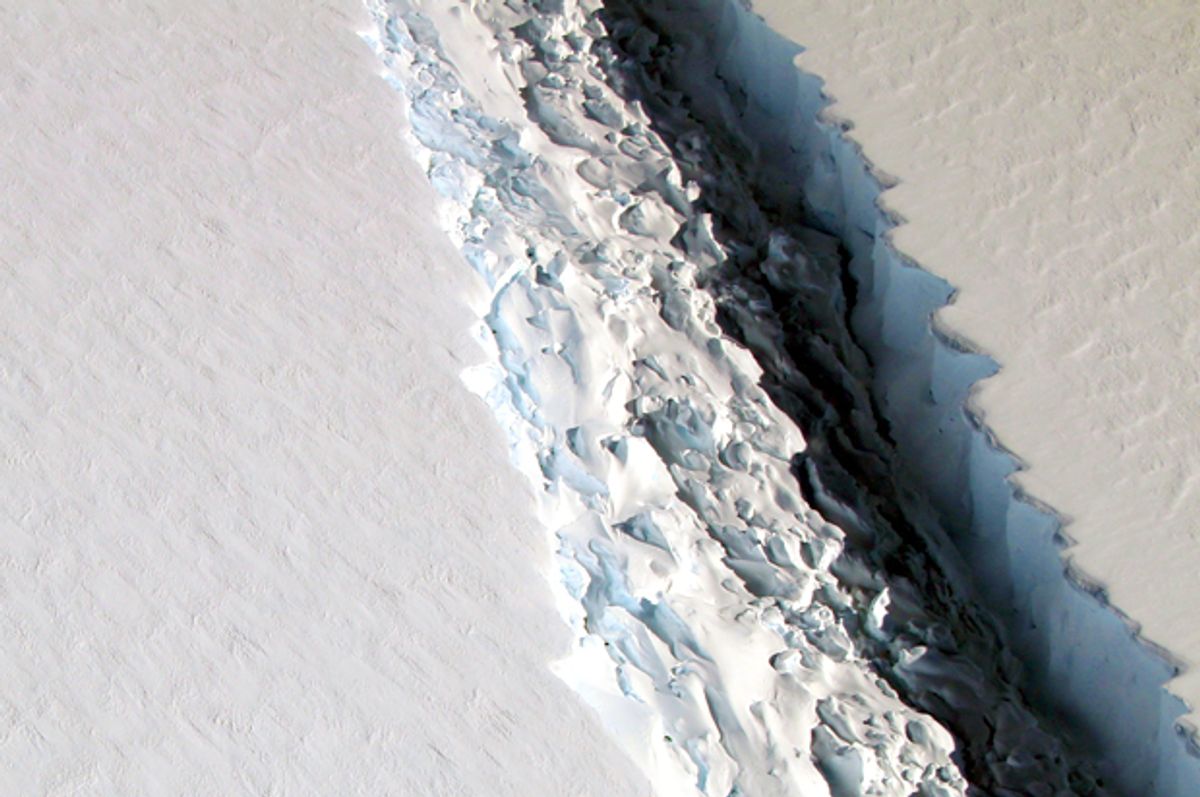 The inevitable moment of reckoning for the Larsen C ice shelf arrived. The growing rift that carved across one of the Antarctica Peninsula’s largest ice shelves reached its end, sending a 2,240-square mile iceberg spiraling into the sea. Welcome to the world, iceberg A68.

The massive slab of ice, equivalent to the size of Delaware and large enough to cover the U.S. in 4.6 inches of ice, will slowly melt over the coming years as it drifts away from Antarctica.

The health of the remaining ice shelf will serve as a bellwether for how climate change could interact with natural processes to reshape Antarctica’s vast stores of ice. The growing instability of the continent’s ice has major implications for coastal communities around the world as it melts and pushes sea levels higher.

“The Peninsula as a whole is losing mass, it has been doing that for many, many decades, but more so now than 30-40 years ago,” Eric Rignot, an Antarctic researcher at the NASA Jet Propulsion Laboratory, said.

The Larsen C crack had been growing since 2010 largely due to natural causes, according to most researchers. When it finally broke through on Wednesday, it reduced the Larsen C ice shelf to its smallest size on record. The ice shelf was the fourth-largest ice shelf in the world, but following the calving event that cleaved off more than 12 percent of its area, it has been knocked down to fifth in the rankings.

Adrian Luckman, a scientist who has been watching the iceberg for years with Project MIDAS, said it would take months or years to document the health of the remaining ice shelf.

Though it has lost 2,240-square miles, Larsen C still spans roughly 15,000 square miles. That could make it more resilient than the neighboring Larsen B ice shelf that collapsed due a warm spell following a major calving event in 2002, but it’s not a guarantee.

Bethan Davies, a glacier researcher at Royal Holloway, University of London, said one of the first things that researchers will look at is the “stress regime” that losing so much ice puts on the rest of the ice shelf. It’s akin to standing up against a teetering pile of books. If you shift your weight or put less effort to propping up the pile, it might start to wobble differently, a few books might fall off or the whole thing could topple over.

Scientists will also be looking to see if other rifts open on the ice shelf. If that happens, it could mean more big calving events, putting further stress on the remaining ice. They’ll also be looking at the surface of the ice sheet for melt ponds, a process that’s already weakening ice shelves in other other parts of Antarctica.

“The critical time will be during the next warm austral summer,” Davies said. “If the ice shelf is destabilized by the removal of this large frontal portion, meltwater ponding on the ice surface may contribute to increased calving.”

Though most researchers agree that the rift itself was mostly due to natural causes, climate change will have a major role to play in defining a new era for the ice shelf and Antarctica as a whole. The disappearance of floating ice shelves will mean that land ice can spill into the sea faster.

“Climate change is a long-term trend. The peninsula has been warming for decades,” Rignot said. “Warm water is the main driver now (in Antarctica as a whole). If warmer air is sufficient to melt the surface, then the ice shelves will break up and sea level rise from Antarctica will be enormous.”

Rignot has previously led research showing that West Antarctica is on the brink of an unstoppable melt that could push seas up to 13 feet higher over a period of centuries. Other recent research has shown that even stable parts of East Antarctica, which tends to be colder, have experienced surface melt events and bizarre lakes forming inside ice shelves.

Coupled with a slew of other findings ranging from spectacularly ominous waterfalls to widespread melt ponds, it’s clear the Antarctic landscape is rapidly shifting due the ravages of climate change above and below the ice.