Emmy nominations: What voters got right and continue to get wrong

There's much to be pleased about with these nominations. There's also "House of Cards," and Barb 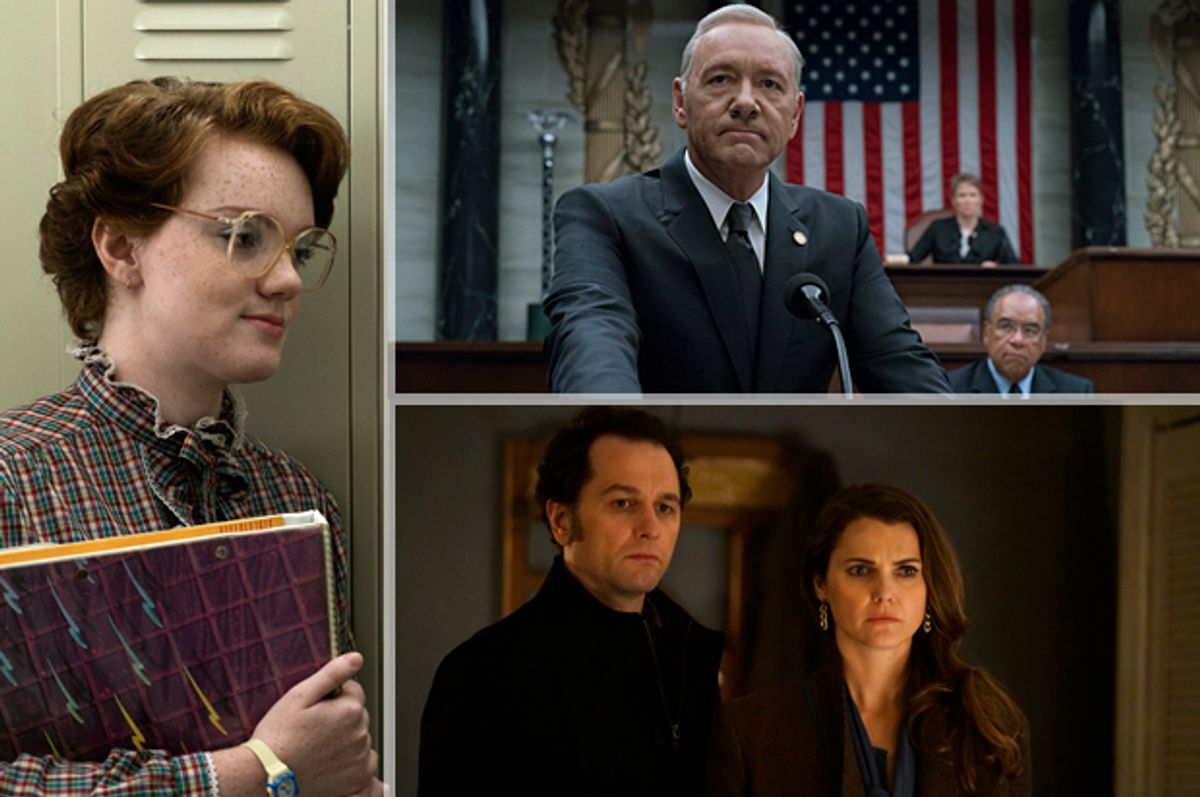 On Thursday Emmy voters provided viewers like me with a few solid reasons to be interested in the awards show. Not excited — we’re not quite there yet. But we’ll definitely be interested in the outcome of several major races that have been set for the 69th annual Emmy Awards telecast, many of which pit deserving newcomers against old standbys.

That’s the benefit and the frustration of Emmy in the age of Peak TV. A number of newcomers are breaking uncharted creative ground, striking chords with passionate audiences and generating buzz that’s too loud to be ignored. And yet, if the enemy of the great is the good, then in this Platinum Television Age of ours, the enemy of the greatest is sheer volume of great, good and everything else.

Remember when we told you that in 2016, 455 scripted series premiered? Well, in order for a program to be eligible for this round of nominations, it had to debut and run at least half a season’s worth of episodes between June 1, 2016 and May 31, 2017. While I don’t have an exact count of the number of eligible programs that aired within this timeframe, enough of them aired that, according to Variety, the drama series category received 180 submissions, with best actor in a drama netting 140 and best actress in a drama raking in 113.

All of which is to say that there's simply too much television for the common viewer to sift through without serious effort. So. Very. Much. Now consider the folks who select the Emmy contenders. Emmy voters are creatures of habit. They love marquee players and repeat winners. And with so many series and performers to evaluate, the typical viewer may be dismayed, if not surprised, that they opted to shove familiar titles and names into major categories as opposed to taking risks on newcomers or more deserving veterans that have been passed over time and again.  This is why alongside the many reasons to cheer this round of nominees, the common frustrations remain.

Let’s break the nominations down on a few fronts, shall we?

Emmy By the Numbers

In terms of overall nominations, HBO comes in first place with 111 nominations, with Netflix snagging second place at 91. The streaming service is generating new series content at a feverish rate with debuts rolling out just about every week.  “Stranger Things” received 18 nominations including a nod for Best Drama, alongside “The Crown,” which scored 13 noms.

Thursday’s Cinderella story, as it were, has to be Hulu and its 13 nominations for “The Handmaid’s Tale,” including for Best Drama and lead actress Elisabeth Moss. What’s more, Hulu got 18 nominations overall — two more than Amazon, long seen as the second-place competitor to Netflix.

Amazingly NBC jumped to third place ahead of FX with 64 due to multiple nominations for freshman hit “This Is Us” and a record-breaking 22 nominations for “Saturday Night Live,” tying it with HBO’s “Westworld” as the most-nominated series out of this year’s batch.  No reason to weep for FX, though; it still secured 55 nods, including a Best Comedy nomination for “Atlanta,” a highly deserved nom for “Better Things” star Pamela Adlon, and several nods for “Feud: Bette and Joan” which is facing off in several categories with HBO’s “Big Little Lies.”

The 22 nominations for “Saturday Night Live” isn’t particularly shocking in light of the long-running sketch series' record-breaking 42nd season, for which it enjoyed a spike in the ratings and became necessary viewing. Although “SNL” synthesized into the go-to antidote for any churning anxiety produced by political headlines, it was not the only series rewarded by Emmy for punching upward at Donald Trump and his feckless administration.

In the Outstanding Variety Talk Series category, TBS’s “Full Frontal with Samantha Bee” and CBS’ “The Late Show with Stephen Colbert” were both nominated, joining a crowd of repeaters including ABC’s “Jimmy Kimmel Live!” and “The Late Late Show with James Corden.” HBO’s “Real Time with Bill Maher” also scored a nod despite his embarrassing recent flirtation with the “N” word, which is not at all surprising given voter habit and how quickly and predictably the scandal burned out.

Save for Corden’s show, these series whetted their blades on each disastrous development of Trump’s presidency and every ineffective move made by Congress to produce viral comedy bits that became part of the national conversation. Not only did that make them more popular with audiences — Colbert especially — it also earned them Emmy notice.

Remember, Colbert was shut out of the category in 2016, while Bee earned a writing nomination. Now notice who isn’t in the ranks this year: “Tonight Show” host Jimmy Fallon, who’s been a regular in this field since 2014.

Satirizing Orange Julius didn’t guarantee Emmy notice for everyone, though; “Late Night With Seth Meyers” failed to secure a nomination, though Meyers did receive a writing nod. Also absent is “The Daily Show with Trevor Noah,” which has begun to truly come into its greatness only recently.

The More Things Change For the “Stranger”. . .

Overall Emmy’s acknowledgment of fresh stories and talent is encouraging, especially among those of us with long memories and deep grudges. In past years we’d be wailing about excellent series that go against the grain such as “Stranger Things” and “Atlanta” being passed over by Emmy. Now, with only a single season under their belts, these series reside at the top of the food chain alongside HBO’s heavy hitters “Westworld,” “Veep” and “Silicon Valley."

There’s also much to celebrate among the individual performance nominations, including Carrie Coon’s nomination for “Fargo,” Millie Bobby Brown’s “Stranger Things” nod,  and Ann Dowd’s dual score for her work in “Handmaid’s” and “The Leftovers.”

Can we talk about “The Leftovers,” though? Can we? The criticallybeloved series failed to make the Best Drama cut although it unquestionably deserved a nomination. For that matter, Emmy also passed “The Americans” by for a series nomination. Nor did it bestow a nod upon for “The Good Fight.” These snubs would be fine, I suppose, if not for “House of Cards.”

There it is, yet again, taking up a slot that could have gone to series that aren’t creatively moribund. This is just one example of Emmy’s adoration for repetition. Admittedly if “The Americans” received a nod it would also be a repeater, but a much more deserving one than “Cards” or its star Kevin Spacey.

In the best comedy category, “Transparent” was passed over as was “Insecure,” both of which produced thought-provoking, comedically fresh seasons. For that matter, the final season of “Girls” did not receive Emmy’s blessing either. But look what did, for what feels like the umpteenth time: five time Best Comedy winner “Modern Family.”

Mind you, other usual suspects also were left out in the cold this time, including “The Big Bang Theory,” and “Bloodline,” and I’d wager many people are fine with that. Reaction to the total shut-out of “The Young Pope,” too, is likely to be divided. I have no problem with that decision. Ditto for the lack of a nomination for Oprah Winfrey’s award-baiting performance in “The Immortal Life of Henrietta Lacks.”

Then there's the too-clever-by-half nod for “Stranger Things” cast member Shannon Purser, also known as Barb. Yes, she inspired a meme. The world went a little nuts for Barb for a while there. But honestly, this is a nomination that boggles the mind and surely frustrates other actors who poured their souls into their performances only to be denied a slot. I find it impossible to fathom that this category's submissions were that thin.

Of course, the number of other deserving series and performers left off this list is legion, including “Legion” — as well as, off the top of my head, “Catastrophe,” “Fleabag,” “One Mississippi,” "Rectify," and “You’re the Worst.” For most of these shows (except for "Rectify," may it rest in peace) we can take comfort in knowing that there’s always next time. We always have to do that, and we always will. Don’t forget, this is Emmy. Take your solace where and when you can.