Conor McGregor denies being a racist with racist statement

Promoting his fight with Floyd Mayweather Jr., the fighter responded to allegations of bigotry with more bigotry 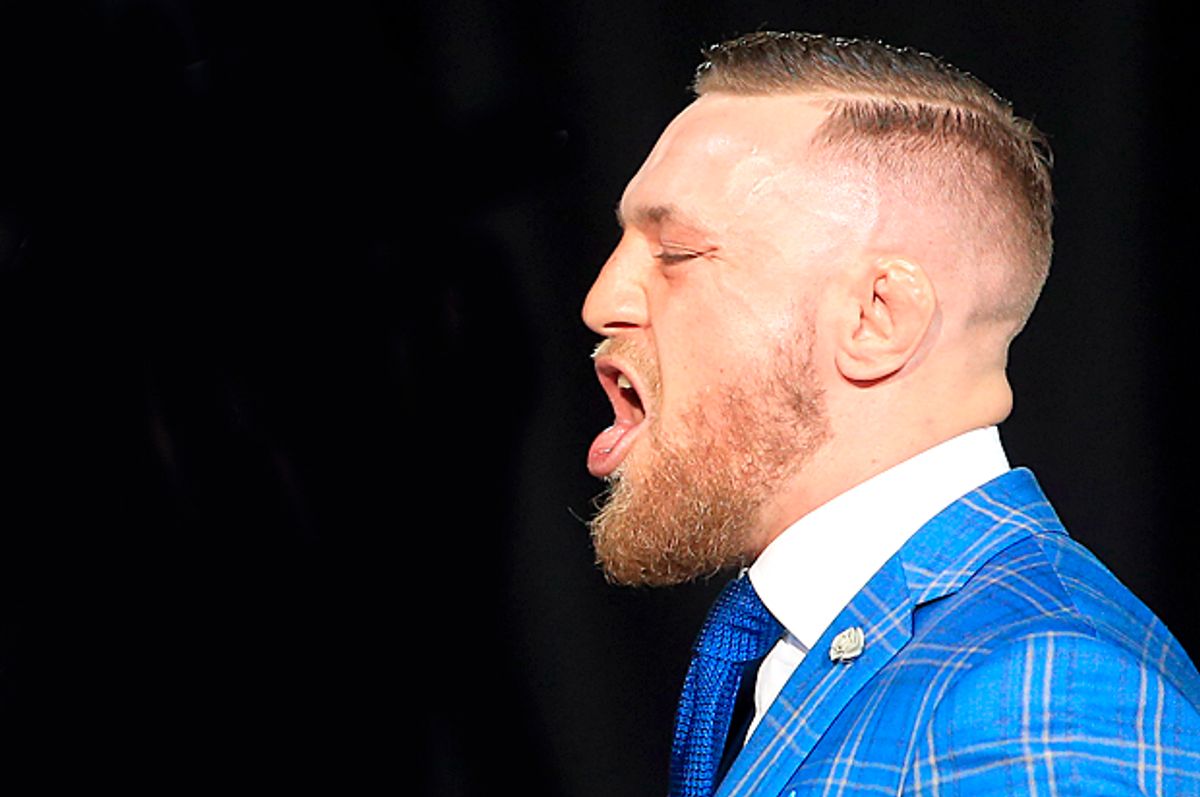 As discussed here earlier, scintillating MMA fighter Conor McGregor delved into the old boxing promotional trope of race baiting during a press conference for his upcoming fight with boxing great Floyd Mayweather Jr. earlier this week. During a fully artificial — if entertaining — face-off, the 29-year-old Irish former multi-belt UFC champ said to Mayweather Jr., "Dance for me, boy" — a phrase that tapped into a long history of bigoted dialogue in both the United States and McGregor's native isle.

Some, including Mayweather's own father, stepped forward in statements to the press and comments left on social media (including Salon's) claiming that the this was not a case of racism. To them, it was "hype" or "just boxing" or due to the fact that McGregor doesn't understand American racism. Many, quite rightly, were not convinced of any of those non-fact-based arguments.

In response to those criticisms, the fighter addressed the crowd at yesterday's event at Brooklyn's Barclays Center on the Mayweather Jr. vs. McGregor press tour, offering a denial of his alleged racism that only seemed to confirm it.

"Let's address the race," McGregor said. "A lot of media seem to be saying I'm against black people. That's absolutely fucking ridiculous. Do they not know I'm half-black? Yeah. I'm half-black from the belly button down."

McGregor punctuated this odd, questionable boast with a shoutout to his “beautiful black female fans" that included thrusting his pelvis into the negative space before him. The crowd loved it.

Watch the whole moment (if you really, really want to) here.

McGregor later stated that yesterday's demonstration was his way of saying that he feels the accusations of racism against him are "stupid" and "ridiculous." He is, in his words a "very multi-cultured individual" and he "doesn’t even see color." Clearly, he does see it.

Yes, supporters of McGregor will no doubt note that this was a joke, an attempt to lighten the mood or perhaps even a compliment to black people (they may even do so in the comments below this very post — please check). None of this is serious, they may argue. At this point, it is.

One of the most famous athletes on the planet is heading towards what may indeed be one of the most watched (and certainly most hyped) boxing events in our young century while parading under a sparkly, shiny banner of long-outdated racial tropes and language. Such actions, whatever their actual intent, serve to extend the life of this kind of behavior and the idea that these ideas and statements are indeed acceptable to use in public and private discourse. They aren't.

Even Mayweather Jr. seems to agree.

Previously, Mayweather Jr. had more or less brushed off the "boy" statement, saying "We all know there's only two types of boys — a white boy and a cowboy — and I'm neither," before claiming that it wasn't really for him to comment.

Yesterday, he made somewhat of a tonal shift. "I don't like the fact that he called blacks 'monkeys,'" McGregor's opponent said referring to this comment. "I think that's totally disrespectful."

The boxer qualified his statements, trying to take the edge off us McGregor's behavior. "But it's all about maturity," he said. "It's all about growth. And mentally, he still can be young. My thing is to go out there and do my job, and that’s to go out there and fight. Not to really worry about racism but racism still exists. We have to try to get past that and try to be positive. This is an event where two fighters are competing against one another. But saying a lot of racist things like today towards black women – you know, I have two black daughters, a black mother and of course I'm a black man."

Mayweather Jr. added, "He's crossing the line, but I can’t really focus on that right now... I’m here to do a job, and my job is to go out there and entertain. But he’s losing a lot of fans by doing that.”

Mayweather Jr. is right when he says his flashy opponent is crossing a line, but he may be wrong in one respect: it's unlikely any of this will have a real effect on McGregor's popularity. For everything that's wrong with the fighter, he knows how to cultivate an audience. If anything, this week's comments may extend his fan base.

This bad, bad and very dumb reality-TV mess will no doubt continue up until — and perhaps past — the fight now scheduled for August 26. Steel yourself for more.