I demand a critical reappraisal of Kesha's brilliant, brilliant music

She's comparable to Michael Jackson and Mozart, and I won't have you saying otherwise 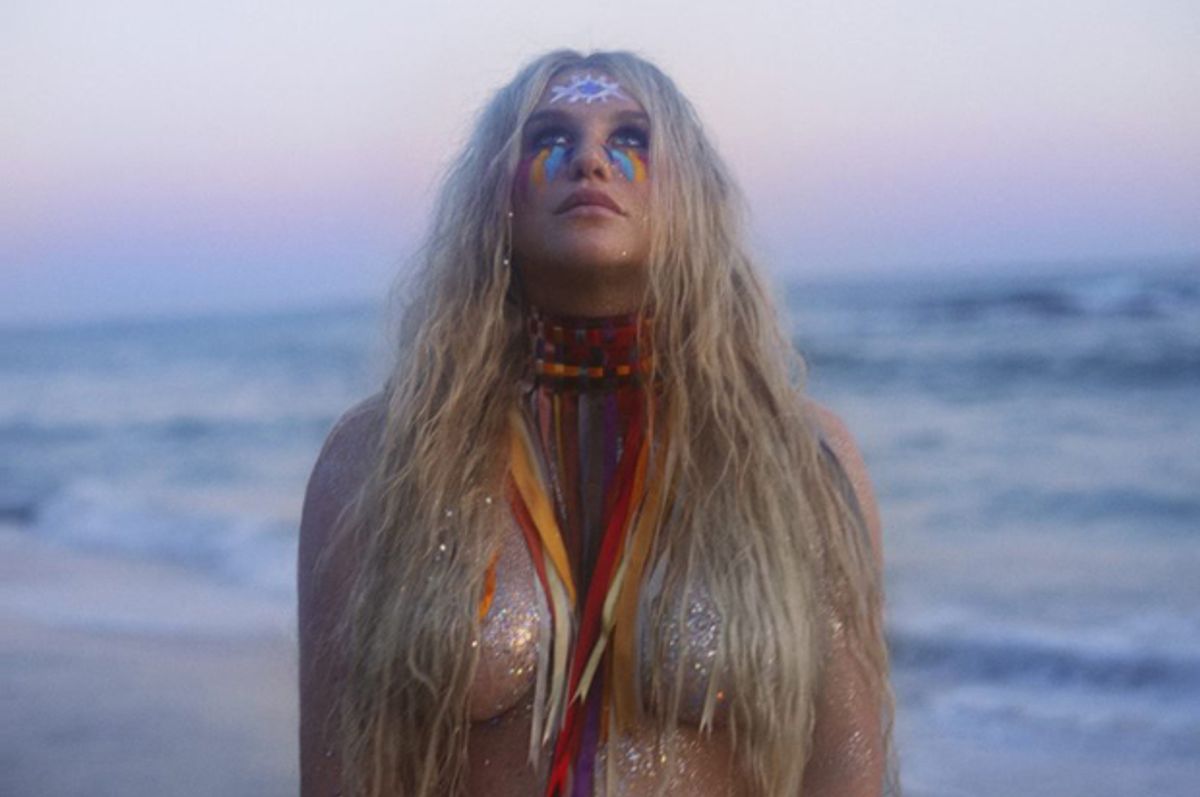 Kesha is one of the great musical artists of our era.

Not only has her music inspired me for years, observed from a certain perspective it can be compared favorably to the works of Mozart and Michael Jackson.

Although Kesha's reputation among music snobs has never been particularly high, it's not like her initial work was overwhelmingly panned by critics. On Metacritic, "Animal" has decisively mixed reviews with a 54 rating while "Warrior" ranks only slightly better with generally favorable results and a 71 rating. Still, this is insufficient compared to what she offers.

A wanderer passing through those aggregators would walk away with the impression that she was mediocre, like most of the pop stars who briefly light up the musical firmament before evaporating from memory.

"'Animal' teems with choruses that stick with the listener for days, from the blissful 'Your Love Is My Drug' to the catty 'Backstabber.' Equally prevalent, however, are heavily processed vocals, which make it hard to tell whether the California cutie can actually sing," wrote Billboard about "Animal."

"Too many cooks in the kitchen notwithstanding, it amounts to 12 songs here with some 40 perfectly crafted hooks," wrote the Boston Globe about "Warrior."

All fail to give a great artist her due.

Of course, Kesha's recent single "Praying" off of her forthcoming "Rainbow" received critical acclaim, and rightly so. It's a beautiful and haunting ballad about depression and personal resilience, one that is inextricably linked to her struggle against a powerful music producer who she accused of rape and was forced to work with anyway by both Sony and the court system (the judge described locking her into the contract as the "commercially reasonable thing" to do).

Yet, while "Praying" is likely to be remembered as the moment when Ke$ha became Kesha — that is, when her overproduced image of a party girl transformed into that of a soulful artist — this does a terrible injustice to her pre-"Praying" oeuvre. I can attest first-hand that her early work does indeed provide an inspiring background soundtrack to my own artistic efforts as a writer.

I'm not sure which musicians other writers like to use as a score their creative process, but I'm pretty sure most will not proclaim (at least openly) that the individual is Kesha. Acknowledging this here is likely to earn me open scorn by some, derisive snorts from others. Yet they are wrong, critically and objectively.

As I explained to my longtime friend Sean Davis — a PhD student in Music Studies at Temple University's Boyer College of Music and Dance, where he has also taught Music Theory — Kesha's music is "very energetic" and has "a certain ironic cheekiness to it in terms of its vulgarity and hedonism." Naturally its lively feel and clever wordplay makes for mental fuel when in the thick of my own creative endeavors. That alone could justify my appreciation for the artist Kesha, born Kesha Rose Sebert. I could let the matter rest there.

There are deeper ways in which to absorb her brilliance, one also summed up by an aspect of my conversation with Davis. In discussing the remarkable biographical similarities between Wolfgang Amadeus Mozart and Michael Jackson, both of whom were child music prodigies who suffered from serious emotional issues as adults due to the mistreatment they suffered at the hands of the entertainment industry (and their parents) as young people, Kesha's name arose.

While Kesha is perhaps not a musical prodigy like those individuals (I'm going to omit the controversy over her IQ scores), she undeniably became very successful at a young age and (if you believe her accusations against Dr. Luke, which I do) was heinously exploited by the music industry. Although one couldn't have known the latter when first hearing the scintillating "Tik Tok" or "Die Young" upon release, one must admit that there is a certain canny self-aware effortlessness to her performances that comes across. In balance, it is starkly reminiscent of both Jackson and Mozart.

It's hard to explain how to distinguish between artists who seem to sweat and groan and labor mightily to produce their work and those for whom it comes with a graceful joie de vivre. You can't dissect it, but you know it when you see it.

When listening to Kesha's earlier work, just as when one listens to "Prayer," the palpable sense that her musical performances are both fun and natural is simply unavoidable — so much so that the transcendent ease of her artistry becomes infectious, invigorating, galvanizing. While some might toil away in their studios to "The Goldberg Variations," those with true ears and open minds find better inspiration in Kesha. Certainly, it is the case for me in my own work.

Yes, it's easy to note that, for many, Kesha represents a guilty pleasure. This is reductive. A true intellect will find that there is nothing to feel guilty about. Shame me all you want for loving Kesha. I have none.