The plutocratic policies pushed by DeVos and the Kochs reject our country's one-for-all, all-for-one egalitarianism 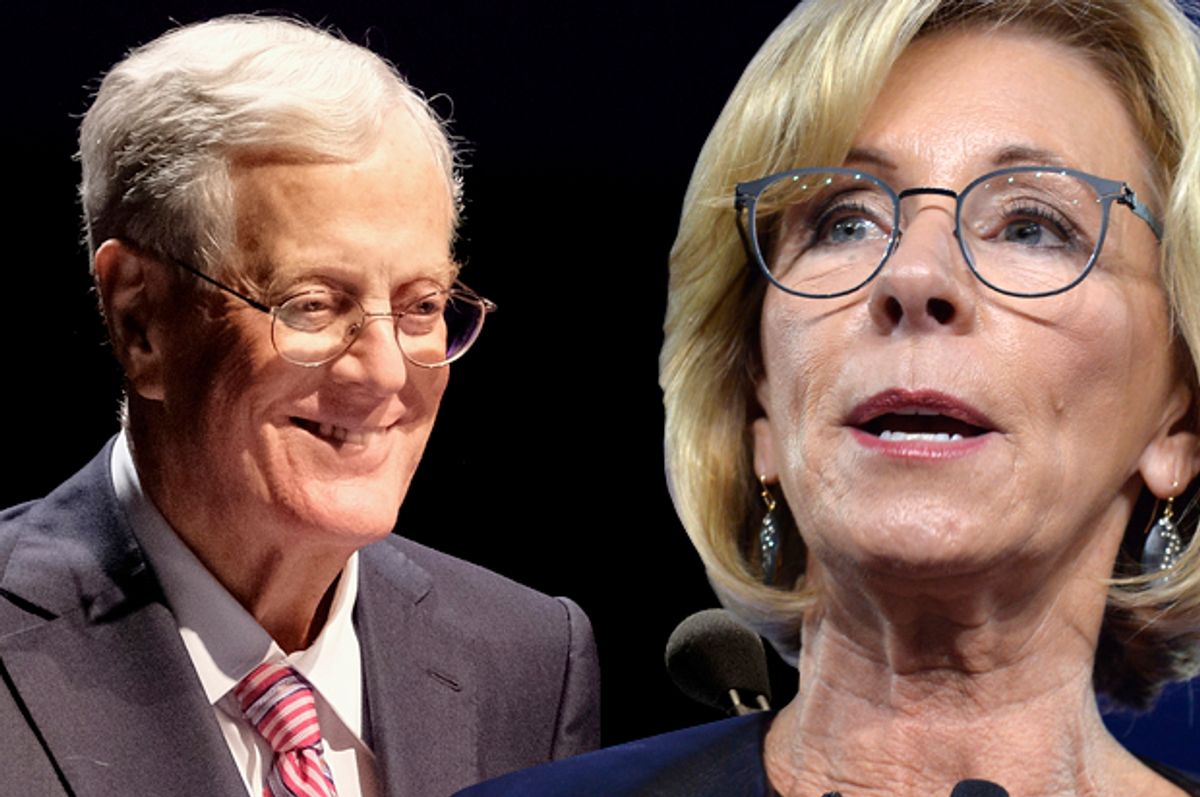 Where are Charlie and Dave, Mrs. Koch's two mischievous boys?

While the Koch brothers have stayed out of the national limelight since the White House was acquired by Trump and Company, that doesn't mean the two right-wing billionaire brats are any less active in trying to supplant American democracy with their little laissez-fairyland plutocracy. In fact, in late June, you could've found them in one of their favorite hideaways with about 400 other uber-wealthy rascals, plotting some political hijinks for next year's elections.

This is the Koch Boys' Billionaire Club, which meets annually at some luxury resort to schmooze, strategize, hear a select group of GOP elected officials kiss up to them -- then throw money into a big pot to finance the Koch's planned takeover of America. It costs $100,000 per person just to attend the three-day Koch Fest, but participants are also expected to give generously to the brothers' goal of dumping $400 million into buying the 2018 elections.

This year, the group gathered in Colorado Springs at the ultra-lux Broadmoor Hotel and resort, owned by the brothers' billionaire pal and right-wing co-conspirator, Philip Anschutz. Among the recent political triumphs that these elites celebrated in the Broadmoor's posh ballroom was the defeat this year of the Colorado tax hike to fix the states crumbling roads. After all, who needs adequate roads when you can arrive in private jets? This attitude of the Koch's privileged cohorts explains why the public is shut out of these candid sessions. A staffer for the Koch confab hailed such no-tax, no-roads policies as a "renaissance of freedom." For the privileged, that is -- freedom to prosper at the expense of everyone else.

This self-absorbed cabal of spoiled plutocratic brats intends to abandon our nation's core democratic principle of "We're all in this together." If they kill that uniting concept, they kill America itself. Their agenda includes killing such working class needs as minimum wage and Social Security and privatizing everything from health care to public education.

For example, Betsy DeVos and her hubby are part of the Koch brother's coterie. They are lucky enough to have inherited a big chunk of the multibillion-dollar fortune that Daddy DeVos amassed through his shady Amway corporation. But what they've done with their Amway inheritance is certainly not the American Way.

The DeVos couple are pushing plutocratic policies that reject our country's one-for-all, all-for-one egalitarianism. In particular, Betsy DeVos has spent years and millions of dollars spreading the right-wing's ideological nonsense that public education should be completely privatized. She advocates turning our tax dollars over to for-profit outfits -- even to private schools that exclude people of color, the poor and the disabled, as well as to profiteering schools known to cheat students and taxpayers.
Bizarrely, Donald Trump chose this vehement opponent of public-education-for-all to head-up the agency in charge of -- guess what -- public education. Rather than working to help improve our public schools, the Trump-DeVos duo wants to take $20 billion from them and give it to corporate chains.

To see the "efficiency" of this scheme, look to Arizona, where state Senate president Steve Yarborough pushed a private school fund into law. One of the corporatized schools, called Arizona Christian School Tuition Organization, has taken more than $73 million from Arizona taxpayers, paying its executive director $125,000. His name is Steve Yarborough. ACSTO also pays millions of dollars to another for-profit corporation named HY Processing to handle administrative chores. The "Y" in HY stands for Yarborough. And ACSTO pays rent to its landlord.

As Wall Street banksters, drug company gougers, airline fee fixers and so many others have taught us over and over, most corporate executives are paid big bucks to take every shortcut, cheat and lie to squeeze out another dime in profits. Why would we entrust our schoolchildren to them?