DeVos's talking points mask a radical vision. Why won't she talk about what she believes? 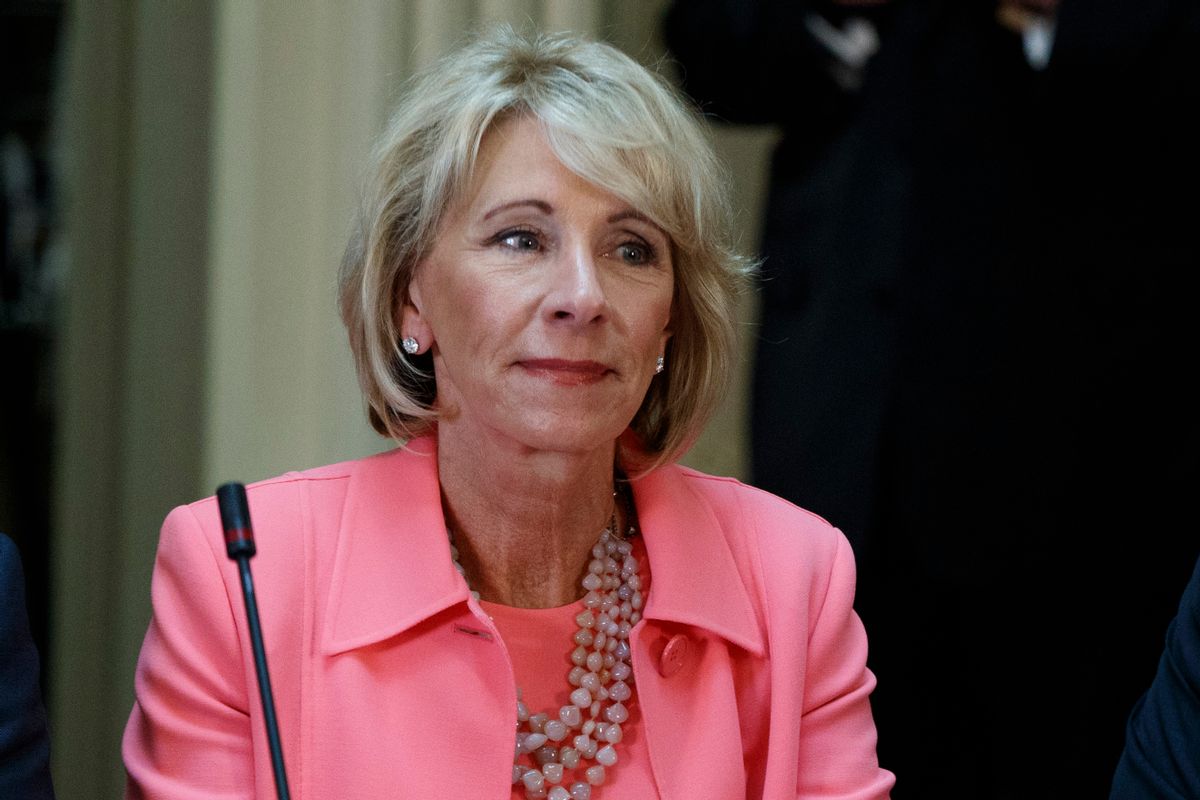 After 156 days on the job, Secretary of Education Betsy DeVos finally sat down with the media on Thursday. Capping off the start to a controversial listening tour on campus sexual assault issues, DeVos took a handful of questions from reporters and mostly delivered talking points in return.

DeVos passed on answering a question about whether she plans to rescind Obama’s 2011 Title IX guidance. To a query about whether she’d erred in agreeing to meet with so-called men’s rights groups, she said it was important to “hear from both sides.” And in response to the star question of the day, delivered by USA Today’s Greg Toppo, about whether having a president who has admitted to sexual assault makes the issue harder for her to deal with, she deflected.

Thursday's brief press event marked the second major media event of the week for the notoriously reporter-averse education secretary. This weekend she appeared on Megyn Kelly’s show for what was billed as her first-ever network interview. It was over in five minutes and made her remarks on campus sexual assault seem weighty by comparison.

Her substance-free performances are all the more remarkable given the fierce urgency with which DeVos has pursued her agenda since arriving in Washington. Sidelining federal civil rights enforcement, rolling back protections for students who have been defrauded by shady for-profit colleges, meeting with a steady stream of “edupreneurs” and flogging school choice at every turn — these have been busy days for the Secretary.

The NBC interview was actually a trio of softballs thrown by reporter Craig Melvin as part of a segment on Philadelphia’s charter school wars. Melvin met up with DeVos at Boys Latin of Philadelphia Charter school. You can read their entire exchange yourself:

Melvin: You go to a lot of schools like this, I would imagine.

Melvin: Critics have said the success of schools like Boys Latin has come at the expense of neighborhood schools. Are you OK with that?

DeVos: Actually, I think schools like this are a really great example of schools that are meeting the needs of kids that haven’t fit in elsewhere.

Melvin: But if there’s only one pot of money, aren’t traditional public schools always end up getting shortchanged to some extent?

DeVos: Great public schools are going to continue to do a great job for the students that they’re serving. I think instead of talking about schools and school buildings we should be talking about funding students and investing in individual students.

And that was it.

In her six months as the top education official in the land, DeVos has gained a reputation as press-averse. The words “closed press” pepper her weekly calendar, and she shuns open media events. But even when a reporter is lucky enough to get a microphone in front of her, forget about forceful follow-ups. That line about funding individual students instead of schools is a DeVos favorite; she makes that statement virtually everywhere she goes. I’ve yet to hear anyone really push her on what it means, or where it leads. New York City requires a massive infusion of cash in order to repair its train woes, but by DeVosian logic we should be talking about funding and investing in individual commuters instead.

As for DeVos’ point about Latin being a place for “kids who haven’t fit in elsewhere,” it came on the heels of a fairly brutal exchange between Melvin and Latin founder and CEO David Hardy about the kids who don’t attend the school. As Melvin pointed out, Latin has fewer students with disabilities than the Philly public schools and not a single student who is still learning English. His refusal to let Latin founder and CEO David Hardy off the hook on this point was squirm-inducing, but DeVos should have been at the other end of Melvin’s insistent questioning. She has consistently held up as models schools that don’t accept hard-to-teach kids. This spring she toured a voucher school in Indianapolis that had no special education students, then touted a Florida private school that says it isn’t equipped to accept kids with special needs. Now here she was again, calling for more schools like Latin.

“This is where Betsy DeVos cherry-picks the kind of kids that she wants to fund and invest in,” says Philly city councilwoman Helen Gym, who was also featured in the segment. I called her to find out if she’d had a chance to chat with DeVos (no) and what she’d thought of the Secretary of Education’s performance. “She wants to invest in certain students and exclude others. And I think she wants to profit off of it too.”

Full disclosure: I’m a Gym fan, and wrote a story about her run for office in 2015 that entailed my following her around the city talking to prospective voters in neighborhoods where shuttered schools stood as hulking symbols of disinvestment. On the campaign trail, she went after public officials whom she accused of walking away from public systems, and called out a trio of billionaires who’ve bankrolled the “disruption” of Philadelphia’s schools. Note to Dems: Gym won handily, buoyed by voters who believed her when she said you can’t lift up a city and the people who live there without lifting up its public schools.

Contrast that with the hyper-individualism of DeVos’ vision, in which families, untethered from neighborhood, public institutions or context, choose what she would call a “learning option.” It’s a radical vision that fares best in the abstract (In Michigan, a collective uproar ensued after the DeVos family’s GOP allies passed a law making it harder for communities to raise money for schools; a judge later threw it out). “She makes these very banal statements about kids before adults and students before systems,” says Gym. “But at the same time she’s deliberately undermining public schools.”

Higher education reporter Adam Harris argues that by mostly refusing to talk to the press, DeVos robs the public of knowledge of what she’s up to, especially as the department makes major policy shifts. But it’s worse than that. The combination of silence and banality effectively mask just how radical her vision is. Instead, we’re left to speculate based on the company she keeps. This week, in addition to her listening session with men's rights groups, she met with a libertarian group in California that maintains parents should be able to flee public schools that are indoctrinating their children into socialism (Closed press). Earlier this spring she paid a call on Larry Arne, the president of Hillsdale College, who has called for rescuing kids from failing schools in order to “reverse support for socialism.” And when somehow the radical anti-gay Family Research Center ended up on the Department of Education guest list for a Father’s Day event, its support for conversion therapy attracted headlines, but not its viewthat homeschooling is the only schooling.

After months of evading the media, DeVos finally surfaced this week — and still had nothing to say. Meanwhile, her actions and her allies tell us everything we need to know.