"Birthright: A War Story" tracks the fight to overturn Roe v. Wade and limit women's rights in the name of religion 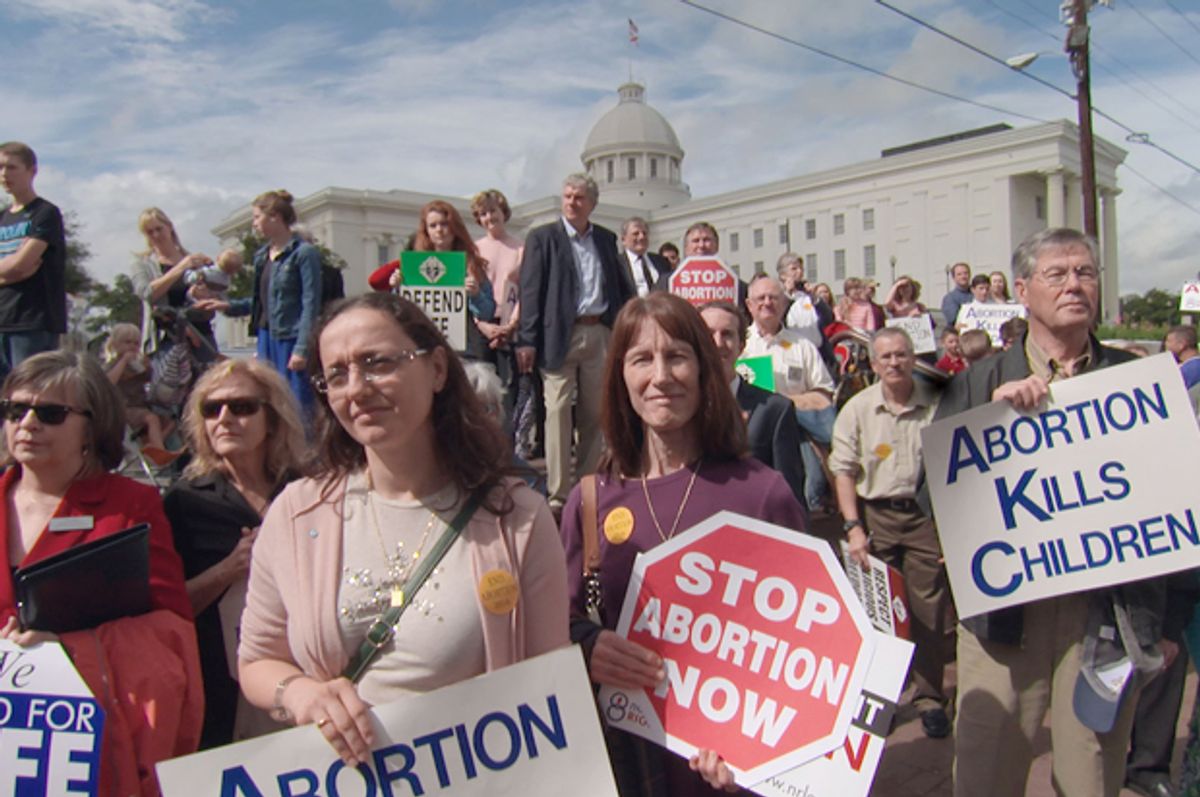 If one were to put together the headline snippets about the Trump administration kowtowing to conservative interest groups when it comes to Planned Parenthood and women’s reproductive rights, the picture would begin to frame what’s been building for years: an assault on the right of women to control their bodies in the land of the free.

But for an even clearer portrait of this ground “war” that has been building since the passage of Roe v. Wade, one ought to check out "Birthright: A War Story," a new documentary that opens on July 14.

The film doesn’t pull any punches. It warns of a threat that would have existed even under a Hillary Clinton presidency, thanks to the 33 Republican governors who are willing to restrict reproductive rights in their own states. And with Trump in the White House, "Birthright" director Civia Tamarkin warns of a possible totalitarian theocracy reminiscent of "A Handmaid’s Tale."

Salon spoke to Tamarkin about the film, a harrowing clarion call if there ever was one, and the grim state we’re in.

Please frame the thesis of the film and what's been happening in the USA since 2010. And please break down the title and why you chose such militant language.

The thesis of the film is that the aggressive movement to restrict women’s access to reproductive health care has created both a human rights and public health crisis in the United States. Women are being jailed, denied their rights to privacy and bodily integrity and deprived of medical decision-making as this right-wing movement tightens its grip across the country. It is definitely an assault on women’s constitutional protections and freedom.

The title "Birthright: A War Story" is a double entendre referring to the dual -- and dueling — arguments between a woman’s natural right of self-determination over her own body and a fertilized egg’s right to be born. It is a conflict between the guaranteed rights of an individual and the perceived rights of the unborn; a conflict between the two entities within one body. The title evokes that battle, which has been waging for generations. It also reflects the divisive ideological fight that has been compared to a civil war.  The so-called “militant language” echoes the terminology used by both sides. They call this “a war.”

When Roe v. Wade became law, opponents immediately issued a declaration of war. This documentary reveals how they gradually and strategically built a war machine -- forging alliances between Catholics and Evangelicals, grooming an army of youth camp foot soldiers, infiltrating the Republican Party and, in some instances, even committing terrorist acts by bombing clinics and killing doctors who provided abortions. They invoked the words “genocide” and “holocaust” as a battle cry. As one Republican strategist explained, “You organize as if you were trying to defeat the Communists.”

Since Ronald Reagan’s presidency, the movement had organized, mobilized, gained footholds, and in 2010 they mounted a full-scale offensive. The backlash against Barack Obama brought a Republican midterm election sweep of state legislatures. With it came a barrage of restrictive laws limiting access to abortion and family planning. States passed about 300 laws over the next five years, almost as many as in the nearly 15 years before. And the restrictions extend beyond abortion to access to contraceptives and family planning information and elimination of sex education in schools. Advocates of reproductive rights and reproductive justice admit they were blindsided and never saw the onslaught that was coming. They admit that they are having a difficult time holding the defense line.

Is Roe v. Wade in danger of being overturned?

Yes, there definitely is a clear and present danger of Roe being overturned under the Trump-Pence administration. With the appointment of Neil Gorsuch to the Supreme Court and reports that Justice Kennedy is considering retirement, opponents of Roe are lying in wait. They have a vast organized nationwide network of lawyers waiting to bring a challenge. At the same time, state legislatures are busily crafting one bill after another to nibble away and encumber Roe in anticipation of the Supreme Court sending abortion rights back to the states.

Beyond that, a growing contingent within the opposition movement doesn’t believe it is necessary to overturn Roe to achieve their goals. They are pushing for state Personhood laws that would declare that the “child in utero” is a person protected under the state constitution. Then Roe would become inconsequential in the face of homicide laws that would make the unborn child the victim of a violent crime.

What were the greatest challenges to making the film?

I did not want to do yet another abortion story. I wanted to go outside the usual lexicon and framework to tell the story of reproductive rights in the context of human rights and reproductive justice. As we began production, we were surprised by the difficulty of getting people to go on camera or even cooperate with the production of the film. As long-time journalists, we were experienced interviewers and had a track record of persuading people to tell their stories. But in this case, many of the women who were victimized by the restrictive laws of this growing radical movement were too afraid or too ashamed to recount what happened to them. Doctors, clinicians and women’s advocates were fearful of losing their jobs. They feared being ostracized or worse, being harmed if they “went public.” At the same time, the attacks on Planned Parenthood and the vociferously anti-abortion rhetoric of the Republican presidential candidates compounded the concerns of potential interviewees. It took a lot of research, referrals and persuasion to find the perfect interview subjects and stories to tell.

Gender politics are terribly confusing now. Women are making so many advances; activism and awareness ("the future is female") is at a high. Yet the Trump presidency, a more conservative Supreme Court, and the subject of your film suggests otherwise. How do you assess where we're at right now in terms of gender equality?

Unfortunately, women still are fighting the same battles they have always fought. The way to control women is to control their reproduction. That is what limits their options and access to education, employment and economic opportunities.

Certainly, over the last half century, with the advent of birth control, the legalization of abortion and the passage of Title IX and Title X, women have made tremendous progress in education and in the workforce. But we are misled by seeing a Mary Barra heading up General Motors or a Meg Whitman at Hewlett-Packard. The fact is there still is a glass ceiling. Only 28 of the Fortune 500 companies are headed by women.  And for most women, the gender pay gap exists. It has narrowed but women still are paid 20 percent less than men.

But under the current Congress and the Trump administration, we are sliding further backward. Certainly, there is no gender equality when you have 13 Republican men meeting behind closed doors to draft a bill that defunds services for family planning, mammograms and cervical cancer screenings and also cuts coverage for contraceptives, maternity and prenatal care.

This is not about reproductive health care: this is about power. This is about denying women reproductive justice, which is their complete physical, mental, social and economic well-being based on the full achievement and protection of their human rights. Without that, the future is not female. And despite the activism and awareness that brought hundreds of thousands of women to march in cities across the country, there is no reproductive justice for rural women, poor women and women of color. There is no gender equality when states and counties are twisting laws to arrest and jail pregnant women or depriving them of fundamental medical care. No, the future is not female when the United States has the highest maternal mortality rate of every developed country.

How did Trump winning the presidency change the shape and tenor of the film?

Trump’s election did not change the content, shape or tenor of the film. We were completing post-production when he was elected and we thought about adding a postscript. But we decided against it because his presidency does not alter the message or intent of the film, which is that all women, regardless of their view on abortion or their political leanings, could become victims of the fallout from the war on reproductive rights. When you make medical restrictions and place restrictions on medical professionals, there are unintended consequences. That is so much bigger than abortion. It is about having access to miscarriage management in a hospital. It is about criminal laws that have nothing to do with pregnant women being used against them.

Like most people, we were surprised by Trump’s win, but we were not at all surprised by the Republican avalanche. We saw the build-up coming as we charted the evolution of the radical right movement that helped put him and Pence in office. The film was prescient and a harbinger of what was to come. We followed the evolution, strategy and impact of the anti-choice movement at the grassroots, state-by-state level, as it groomed and supported political candidates who would be loyal and pay back.

What was most astonishing was the strange bedfellow the religious right found in Trump. But they swallowed hard because he made them promises which he immediately handed out with the Supreme Court and the appointment of arch abortion and contraception foe Tom Price to head the Department of Health and Human Services.

All this makes the film timely and relevant. But it would have been relevant even if Hillary Clinton had won because of all the restrictive laws continuing to take hold in state after state. Now there are 33 Republican governors to endorse and sign reproductive restrictions that are based on religion and junk science. And that rising tide is now matched by a powerful driving force from the top down.

Your film is being pitched as a "real-life 'Handmaid's Tale'"; do you think the comparison holds up?

The themes and messages of Margaret Atwood’s dystopian novel "The Handmaid’s Tale" most definitely resonate throughout our documentary. The novel’s premise of a right-wing fundamentalist takeover of the United States is frightfully analogous to what we see happening in Washington, D.C., and across the country. And as Donald Trump panders to the religious right with repeated proclamations about a return to faith and God, there indeed are echoes of a totalitarian theocracy based on a foundation of Puritan roots in which women are subjugated and turned into breeders. From the moment Roe became law, the Catholics and later the religious right in this country have been waging a holy war against abortion and thus against women’s reproductive rights and freedom.

What we are seeing across America are legislatures and courts determining whether, when and how women will give birth. When women who attempt to self-abort are arrested, when woman who are miscarrying or carrying non-viable fetuses are refused necessary medical care, when the state jails pregnant women and orders what they can and cannot do, then the comparison to "The Handmaid’s Tale" becomes all too realistic. And when our government seeks to ban both contraception and abortion, then women indeed are forced to bear children.