Why is Donna Brazile still emailing me? The tone-deaf DNC has no credibility

It may be fun to watch the Trump team get implicated in Russia hacks, but the DNC has its own deplorables 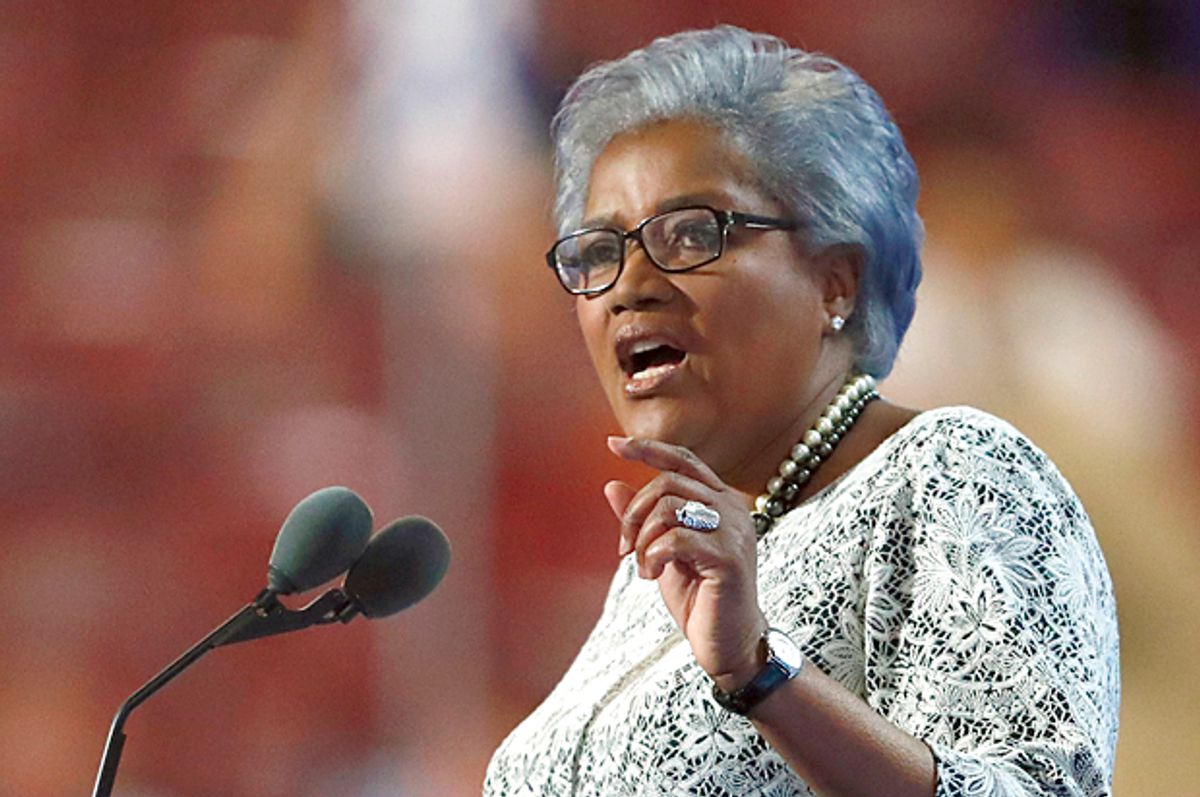 On July 7 I got an email from Donna Brazile. Well, to be exact, the email was sent to me and everyone else on the Democratic Party’s spam list.  But the message still felt personal. In fact it was the second message that had come to me in one week from Brazile — each of them asking me for money and each of them trying to suggest that I should have faith in the Democratic Party to uphold democratic values.

It was a stunning sign of how politically tone-deaf the Democratic Party has become and it proves that the party has zero interest in operating with integrity. Instead, the fact that Brazile is emailing me shows that the DNC is as cronyist and elitist as the GOP.

To refresh our collective memory, Brazile is a perfect example of the DNC’s insider clique and its complete disrespect for the democratic process.  When Wikileaks dumped a bunch of emails from DNC insiders it revealed that Brazile had passed on questions to the Hillary Clinton campaign to give her an edge in debates against Bernie Sanders during the presidential primaries.

When the emails were first dumped, Brazile denied she had cheated.

But it’s worse than that. She didn’t just deny it, she went on a righteous rant. “I did not receive any questions from CNN,” she said in a Fox News interview last October. “As a Christian woman I understand persecution, but I will not stand here and be persecuted because your information is totally false.”

Stop and think about that for a moment, because that sort of bald-faced lie is the exact thing that the DNC is excited to discover in the Trump team’s stories about their ties to Russia.

After the first email dump, CNN decided to cut ties with Brazile, who at the time was a CNN commentator and interim chair of the DNC.  Brazile replaced Debbie Wasserman Schulz who had been forced to resign as chair of the DNC back in July 2016 just before the convention when the Wikileaks dumps “showed embarrassing emails among party officials that appeared to show co­ordinated efforts to help Clinton at the expense of her rivals.”

That’s right. The DNC replaced Wasserman Schultz with Brazile, even though they were both clearly implicated in the allegations of a rigged DNC primary.

In the months when she was interim DNC chair, Brazile went on totally lying about her transgressions until she finally admitted to doing it, but stated that she felt no remorse.

In November, shortly after the election she confessed to the passing on of questions to the Clinton camp, but refused to apologize: “My conscience — as an activist, a strategist — is very clear,” she said in an interview with talk-radio host Joe Madison.

So first she lied, then she justified her decision to show bias towards the Clinton camp. But mostly she blamed the Russians.

Yet, as many of us have pointed out, whatever Russia’s role in the hacks may be, the truth is that the leaked emails showed that the DNC was working behind the scenes to help the Clinton campaign. In fact, a class action lawsuit has been filed to investigate the DNC and Wasserman Schultz for collusion and fraud.

After months of lying and justifying, eventually Brazile caved and she issued an apology in March of 2017.  In a piece published in Time, Brazile wrote “[A]mong the many things I did in my role as a Democratic operative and DNC vice chair prior to assuming the interim DNC chair position was to share potential town hall topics with the Clinton campaign.”

If you haven’t read it, I’d urge you to take another look at her apology, because the piece is really more about Russia being at fault than her. And in the end, she still insists that the DNC was fair to Sanders, a story that simply doesn’t hold up to scrutiny.

It also isn’t the argument used by the DNC’s own lawyers as defense in the class action lawsuit against them. DNC attorneys have claimed Sanders’ campaign contributors donated already aware that the DNC favored Hillary Clinton. In other arguments in the fraud case they have also argued that the party had no obligation to be impartial to the candidates.

Meanwhile, when DNC insiders aren’t blaming the Russians for the DNC’s own lack of integrity, they are suggesting that Trump won because he appealed to white working class voters who favored his pro-white narrative.  But data shows that the so-called “basket of deplorables” is actually a myth. As Paul Street argues in Truthdig, the establishment democrat strategy is to “blame those stupid and vicious right-wing white proles out there” rather than take seriously the economic concerns of the working class.

They are also tone deaf to the fact that 42 percent of voters currently consider themselves independent. Only 30 percent consider themselves Democrats and 26 percent identify as Republicans.  The rise of independent affiliation is directly tied to the disgust many have with both parties — and it’s a sign that the two-party system isn’t serving our democracy.  That means that mantras about party loyalty make zero sense in a political climate where neither party can claim a majority of voters.

The Trump administration’s cronyism, elitism and disregard for any semblance of democratic values has voters calling for impeachment, but the DNC has its own credibility problems — exemplified by the fact that Donna Brazile is still a party insider.

To really prove the point, we learned back in June that the DNC is still paying Brazile months after her position was formally turned over to Tom Perez, according to documents filed with the FEC.

The Observer reports that the DNC paid Brazile over $88,000 in salary in March, and that she received more than $42,000 for management consulting right after she left her position as DNC interim chair.

And that brings me back to Brazile and her emails to me.  In her most recent one she speaks about how Republicans have “sunk to new lows.”

“Every time I think Republicans have sunk as low as they can, they manage to find a way to go lower.” She then lists a number of ways that the Trump team has insulted our democratic traditions.

And, while she may be right, she is clearly not the right person to be trying to make that point.  In fact she is the last, or at least near the last, of the DNC deplorables who should be trying to send messages to those on the left asking for support of the party.

It’s an astonishing example of a lack of self-reflection, self-awareness and political sense. Brazile was busted for being unethical, she then tried to cover it up, and when forced, she issued a half-assed apology.

But she has the nerve to end her email saying: “We have to keep pushing back . . . and do everything in our power to protect our right to vote.”

Well, I say we all have to push back on a party that allows a discredited and unethical person to pose as a symbol of positive party values. Brazile needs to stop taking checks from the DNC and she really needs to stop sending me email.