Feminist literature like "Who Is Rich?" needs to be the standard, especially from straight white male authors 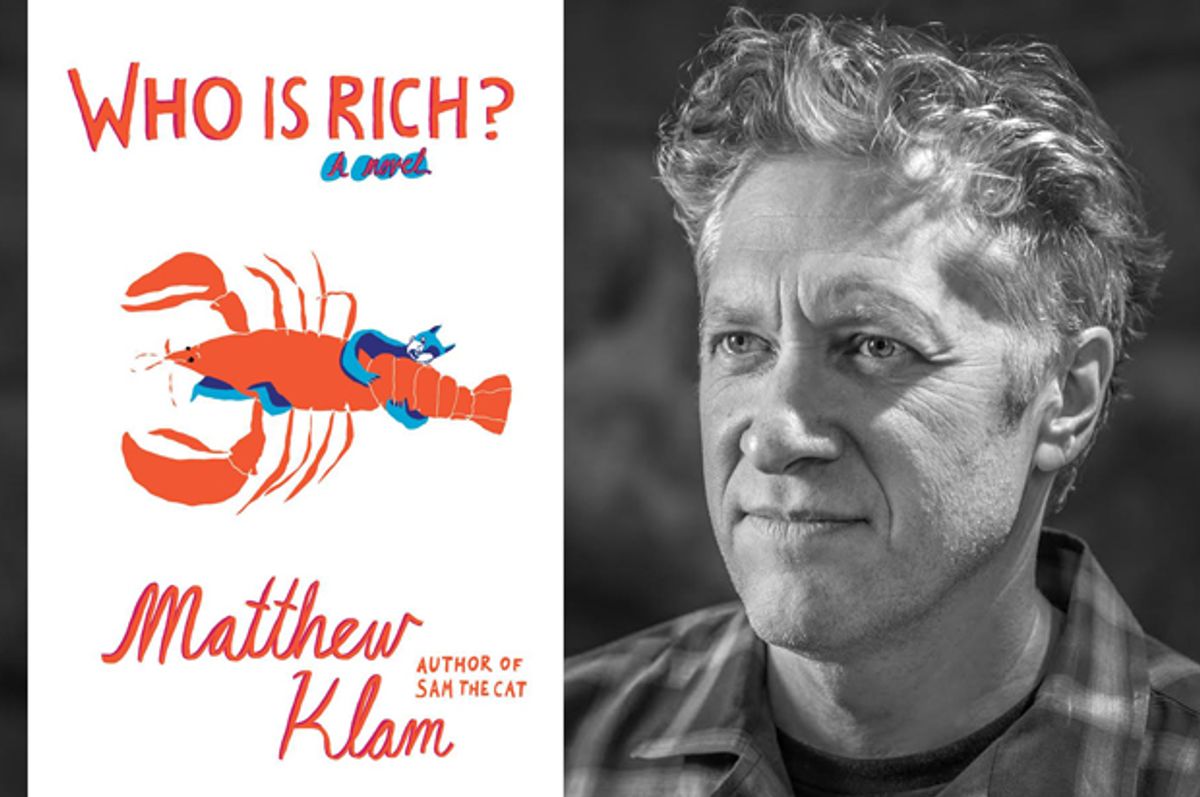 Matthew Klam’s new novel “Who is Rich?” is a contemporary masterpiece. He’s got a gimlet eye for the way men look at women, writes sex with such verisimilitude you might think you’ve slept with him, and writes women as fully realized, whole, equals — which, infuriatingly, is still notable in 2017. “Who is Rich?” a novel of great empathy that follows the mighty success of Klam’s 2000 collection of stories “Sam the Cat,” was published this month to much fanfare — excerpted in Esquire, featured in The New Yorker and by NPR and on CNN — and wide critical praise. It is also the rare book by a cisgender heterosexual white writer to be launched with this much buzz that also has a deeply feminist sensibility.

Klam’s treatment of women, gender roles and sexuality is markedly different than most of what we see in such books. That’s important. Literature translates civilization from one generation to the next, and all too often the “big novels” — which are too often written by white men in a literary culture that remains patriarchal — pass along a lack of intersectional feminism. That is, too often they are sexist, racist and continue narratives of a miasma of other forms of oppression. While queer men and men of color — themselves oppressed — have always been more engaged with developing work that is feminist in approach, we still bow to stilted fiction by the straight white male fiction writer — paging Jonathan Franzen.

“Fiction has been dominated by white men for centuries,” said Jason Diamond, a Rolling Stone editor and author of the smart and charming memoir “Searching for John Hughes,” in an email interview. “Fiction would be a dead art if it continued down that path. Women, writers of color, LGBTQA people, people with disabilities, and translated works are all vital to the state of literature. So yes, an intersectional feminism that includes all of those people and amplifies their voices absolutely matters in fiction.”

Klam’s fiction is on the side of change. His books are, as he put it in a phone interview last week, “all about transgressive sex.” At the same time, his fictional worlds acknowledge the harm done to women in our culture and the long-term effects of sexual trauma. They are rich in love for women, and that’s a beautiful thing. It doesn’t deserve a medal — there should be no medals for treating women as fully realized humans in a world that treats them horribly — but Klam’s writing does deserve close attention. He is a knockout writer, and “Who Is Rich?” should be the new standard bearer for what we should expect in terms of treatment of women from “big books” we give much attention to. Or, for that matter, books — period.

“Who Is Rich?” explores the story of middle-aged Rich, his wife Robin and the wealthy Amy, with whom Rich is having an affair. In the Boston Globe, Steve Almond — himself a writer whose work is feminist and true — writes, “The plot is rudimentary and almost beside the point: Rich and Amy flirt, surrender to lust, retreat, reconnect, and bid farewell.” The novel is smart, full of heart and hot, and it dazzles in craft — the voice grabbed me by the brain and heart and gut and yes, below the belt, from the first page. As he did in “Sam the Cat,” Klam traffics in depth and isn’t afraid to put on the page the real ways both men and women often move through the world — lonely, anxious, afraid, confused, wanting, wanting to be wanted, not being wanted.

Klam’s fiction is rife with humanity, with people full of longing. In "Sam the Cat," writer David Lipsky tells me, Klam "seemed to have found the way to be direct about what human beings felt . . . it seemed to offer a new model for us to read and talk about the conflicted thing of what it is to be human." Indeed, Klam's work is an emotional chiaroscuro married to carnal cravings, bodies and sex — what he calls “wiggly meats” in “Sam the Cat” — that is hungry, filthy and feminist. The men in the Klamverse are often lusty and on the prowl and sometimes cheating or thinking about it, but notably they are — gasp! — by and large concerned with women’s happiness, including women’s sexual pleasure for its own sake, not primarily as a way to gratify their own egos. As Rich himself says, “she was smiling, thank you god.”

Klam — who name-checks iconic feminist creators like Phoebe Glocekner and Alison Bechdel in his own work — belongs on the shelf not with Philip Roth and John Updike, to whom he’s often compared. Klam’s true male predecessors (women have been doing this all along) are the men of color who have been grappling with men and women in sensitive, thoughtful, rich ways for generations now, alongside the rare cisgender straight white male authors like John Irving and Raymond Carver, who render whole, capable female characters and who look closely at the world, including the shitty, sometimes violent things men do to them, that requires their resilience. These writers show us how women survive and how admirable women are, beyond the outmoded narrows of virgins, sluts, embittered shrews, frigid marms or needy victims.

Many feminist writers have made the case that we don’t need to stop reading old-boy work, that we should learn our past from the writing and note the literary merits of such work despite the sexism. As one famous white male writer said to me recently, “If we set down all the work that’s sexist, we’re going to set down a lot of the masters of the last century.” Why not? Wouldn’t it be a glorious world if we read Zora Neale Hurston and Toni Morrison and Raymond Carver and James Baldwin and Alice Walker and John Irving and Ursula LeGuin instead of insisting the sexist dudes of old retain their berths? Isn’t it time to start thinking of Roth and Updike and Miller and Bukowski as period writers, like Henry James? Aren’t they? Or are we accepting sexism as universal and part of the human condition?

That’s not a rhetorical question.

Klam is careful to show us women’s lust and fulfillment and reminds us that male sexual satisfaction is not contradictory to a feminist landscape. In Klam’s world, women’s orgasms are just as important as men’s and the women don’t even have to be punished for them. Eureka! Further, no women were objectified or diminished or harmed in any way in the making of this novel. (Perhaps we could add that disclaimer to the back of books the way the ASPCA notice appears at the ends of films.)

The fact that this is notable — and it is — about Klam’s work is tragic. That should not be the case, especially in 2017. This is increasingly important in a current political climate that is openly hostile to women, up to and including the president. Literature is on the front lines of reflecting how we look at one another and treat one another. The notion that art, and particularly literature, can save us — that is, bring us to our highest human potential — is age-old and yet still popular, embraced by Plato, Tolstoy and many contemporary writers considering morality and fiction. Combined with activism, art can save us. But in order to do that, literature must first save itself from its own sexism.

Too often we dismiss sexism, racism and other forms of oppression in literature under the guise of being concerned not with content but only with craft. We hear, “Yeah, it’s not good on women, but the writing is tremendous.” It’s time to entwine the two. As the writer Kiese Laymon, author of the sublime, smart, heartbreaking, grappling works “Long Division” and “How to Slowly Kill Yourself and Others in America,” told me during a long conversation we had about this essay and the state of literature, “the craft of realist literature is the art of rendering characters who are true in a world that is real.”

Fictional works that erase women, offer them only in the male gaze or diminish them are not true. Books that never consider the oppression of women and the world of abuses women suffer are not realistic. The world abuses women; leave that out and you have utopian fiction. “These are very much craft concerns as well as human concerns,” said Laymon.

If fiction with a feminist ethos by men does not start to be considered requisite to critical attention, I think we’re doomed. As Laymon told me, “the world did not get here by accident.” We talk about literature saving us, but it’s not going to without being intersectionally feminist. With a huge disconnect from what we claim heals the world; we say sexism can be OK in the art we make, sell and consume. We let white men get away with it and go on leaving writers of color, male and female, and women writers to do the heavy lifting, with little fanfare or support.

In this climate, Klam’s novel, along with his story collection, are critically important both for what they are but also for what they teach writers to write and our literary world to exalt. We shouldn’t expect less from white men in the dominant culture, even in our “crazy racist, crazy sexist, crazy heteronormative American literary enterprise,” as Laymon calls it. We should demand more and do more ourselves, in whatever parts of the literary food chain we occupy. What we demand of white men in the literary world echoes and informs their behavior in the wider world, and vice versa.

I asked National Book Critics Circle President Kate Tuttle whether we should expect fiction writers to have a feminist sensibility. “At this point in history it should be the least we expect, as readers, from writers of any gender,” she said. “I think there are a lot of men out there who can write well about women, and it's been lovely to read them — though, as you say, there's a multi-century tradition of white male writers who treated their female characters, as well as characters of color, as less than fully human. There are still writers like that, but it's easier and easier to call them out. Why read a book with such a limited worldview, when you can read something better, by a writer whose vision is more inclusive?”

Indeed, let’s call them out. Let’s expect more. Laymon told me that when he writes he tries to “make sure that Toni Morrison would be OK with what I say. Not think it’s good, I’m not saying that, but that it wouldn’t be harming, that it would be doing the work that needs to be done.” We need white men to do this, too. In fact, we all need to do this.

Klam told me he thinks it’s his job — not as a writer, but as a man — to “undo some of the horrible damage” men have done women, to “be on the plus side of the column.” I think that ethos aerates his writing with every word. Klam is rich in love for women and for the world. We should expect this from all of our “big” books. That’s how we will be redeemed, salvaged from our wretchedness.

That’s how we all become rich.