"Women's stories are about kicking ass" 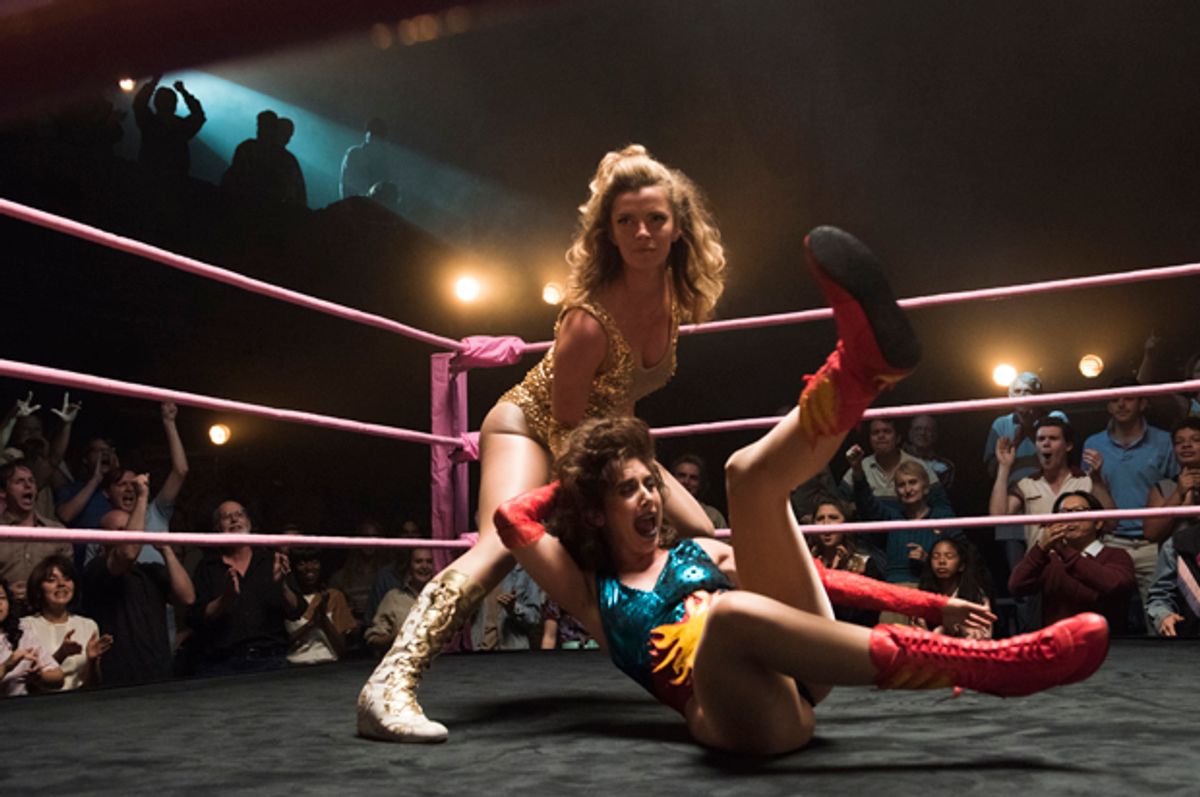 In just the few weeks since "GLOW," a fictionalized look at the real eighties-era Gorgeous Ladies of Wresting, debuted on Netflix, its entire cast has been catapulted into a next-level echelon of fame. And while their hair may not be as big or their lipstick as glossy as their fictional counterparts, it's been gratifying to discover that offscreen, they are just as bold and funny. In separate phone interviews recently, Salon spoke to "GLOW" stars Britney Young, who plays Carmen "Machu Picchu" Wade, and "American Gods" costar Betty Gilpin, who plays Debbie "Liberty Belle" Eagan, about body image, newfound fame and the occasional "misogyny tornado."

Britney, you worked in Hollywood as an assistant to "Crazy Ex-Girlfriend" co-creators Aline Brosh McKenna and Rachel Bloom, and acted on the show. Now you're doing another very female-driven production. What is it that appeals to you about those kinds of shows?

Britney Young: What really draws me to both projects and makes me love them is that with all the specificity in them, they're so universal and so relatable. My family loves "Crazy Ex-Girlfriend." I love that I can sit there and just feel, "That’s totally happened to me before." That’s what really, really makes me enjoy things even more because it’s like, “I may have fallen on my face in this situation, but how does Rebecca handle it? How does ["GLOW's"] Debbie? How does Ruth? How does Sheila?" That’s what I really like about both of those shows . . . . I love the fact that [on "GLOW"] we had only two or three episodes that weren’t directed by women. We had a majority of episodes that were written by women and . . . I love that it’s women writing for women about women. Not to knock our writers who are men, because they do phenomenal jobs. But they come to us and say, “Hey, what do you think about this?” We’re like, “Yeah, no, this is realistic. This makes sense.” I really do appreciate that about our writers — they’re fantastic. All of them across the board. The stuff they come up with, yes please a million times over again.

Like when you see women depicted as syncing up their periods, or a nursing mom in an exercise class who then suddenly starts leaking.

Young: Especially the scene with the periods; I relate a lot because like I’ve been . . . on teams before with all girls where it’s like, “Oh my God, we’re all on our periods.” That stuff happens . . . . It's something that we never talk about, just the real things, everyday life things that happen with your period. Yes, you’re close to your friends, you’re going to sync up. That biologically will happen. So I really appreciate us just bringing out all the things.

Betty, you've talked candidly about your experiences in Hollywood. Were you intentionally looking for a project that was more female-led?

Betty Gilpin: This was not a conscious choice on my part. I mean, this has been a very exciting year and it’s been so wonderful to be able to work for a female team. My dreams never extended to this place. I feel like I’m completely improvising at this point because as a New York actor doing primarily theater for the past 10 years, when I could get film and TV to pay the bills, I tried really hard to get number 13 on the call sheet of "CSI Oklahoma City." I tried really hard, and I just didn’t get it. I never — well unless it was a true misogyny tornado of insanity in a script — I would turn that down. But I wanted to have health insurance and pay my rent. So, I auditioned for everything. You’re made to feel as an actor like you’re never going to work again or you’re replaceable and that you have to take whatever opportunity you can get. This is the last opportunity you’ll ever get, ever. [And now] this happening and coming together . . . I can’t believe this is happening.

How are you both handling the reactions to the show, and to you?

Gilpin:  My brother gave me the advice — don’t walk into the Port-a-Potty and look into the toilet. There’s no way you’re going to like what you see.

The response to my [Glamour] article [on confidence and body image] has been so nice. I have talked to women who have felt similarly about their curves, how they felt like it assigns an identity to them before they even open their mouths and they feel like they have to cancel out their identity with their behavior. I think that having a body that is curvy and very present in a room, it always felt like . . . every play I did we would tape my boobs so that it wasn’t Betty’s body, so that I could disappear into the character. [Now] everything is useful. Everything is useful in my body in terms of playing a character and feeling powerful.

I had dinner with my agent last night and we were talking about, “Okay, what are our plans for this point?" It’s been a real lesson in self-worth because I never had a plan at this point . . . . But I do feel like maybe my brain found a secret little note that was, "In case your secret dream does come true, there are instructions buried in a safe." The impossible happened. What do I do? Breathe. Try to outsource confidence from all the confident alpha women that I’ve surrounded myself with throughout my life. Just try and copy them and fake it until I make it. . . .

I was thinking if I had gotten "GLOW" even five years ago, when I was 25, I think I would either be sobbing, huddled, and afraid in an empty dumpster in the Midwest waiting for it all to blow over and calling my mom asking for snacks to be brought to the dumpster, or I would be doing cocaine on top of the mountain. I would go totally insane. It’s really helpful knowing who I am coming into this. When you’re young it sort of feels like you’re trying on the skins of a million different people who you could maybe become. As I get older, it still feels like that. But it also feels like I’m walking around in my own adult brain opening doors and going down the hallways that I haven’t yet. It feels good to be in my thirties. I’m so excited to be an actress of 40 and 50 and 60. Yeah.

Young: For some reason, I got it in my head the first time I tried to be on Twitter, "I have to make these great statements, I have to do all these things." Then I realized all I've got to do is be myself. People are going to either gravitate towards that or they’re just not going to follow me and that’s okay. I think what I enjoy about Twitter is that that yes, you can really talk about anything you want, like, “Heads up guys, I just had my period last week.”

I’m realizing that we need to have more diversity, not just in the people we portray or the stories we portray, but in the amount of time that we portray them. I think unfortunately we’ve gotten into this kind of mold of, “Oh, here’s the plus-sized actress. We’re only going to cast that plus-sized girl for every plus-sized role in Hollywood." We’re really only seeing one plus-sized actress in all these different roles. What we need to do is still have all these roles but just hiring more plus-sized actresses -- they are out there. I always get upset when I see movies where it’s like Jimmy Jo had to gain 50 pounds to play this role. Why not just find someone who’s that exact weight to play the role? Why get Jimmy Jo? I think we need to start making more opportunities to actually put these people in these roles and to have these stories come out, where it’s not the same show over and over again. It’s now multiple shows telling different stories about all these diverse people, shapes, sizes, races, colors, everything. I think we can have hope. I am hopeful and I am going to try to do my best to try to bring more diversity and bring more awareness to all these things, but we still have some work to do and we have got to get on it. That’s my honest answer.

Britney, there was a piece this week in the National Review about the Bechdel test, that said that popular Hollywood stories are about "extreme" characters like cowboys, while women's stories "are more focused on ordinary people with real-world problems, but those movies usually attract small audiences." How do you respond to that?

Young: Yeah, women’s stories are about domestic life and friendship but guess what? They’re also about kicking ass, being empowering, having jobs. There’s so much more. I think that’s the problem. We’ve been given male stories where they can go into space and start colonies on Mars, but women have to stay down here on Earth and take care of the babies.

I think that we have put female stories into kind of this straight and narrow cattle ride, like there’s only one way to go. That is not how women’s lives work. There are so many twists and turns. There are so many different points you get to. There’s nothing wrong with having a female story about friendships and domestic life. There’s nothing wrong in it because that does happen. But you have to also show all the other things that happen to women and then also all the other things that women are capable of. People get so upset. I saw a lot of reviews [of "GLOW"] where it was like, "Oh here’s this trailer basically showing women can do anything men can do." You’re right. Women can do anything men can do. Sorry to tell ya.