Afraid of telling my troop and my mother the truth, I attempted to buy my way out of a looming crisis 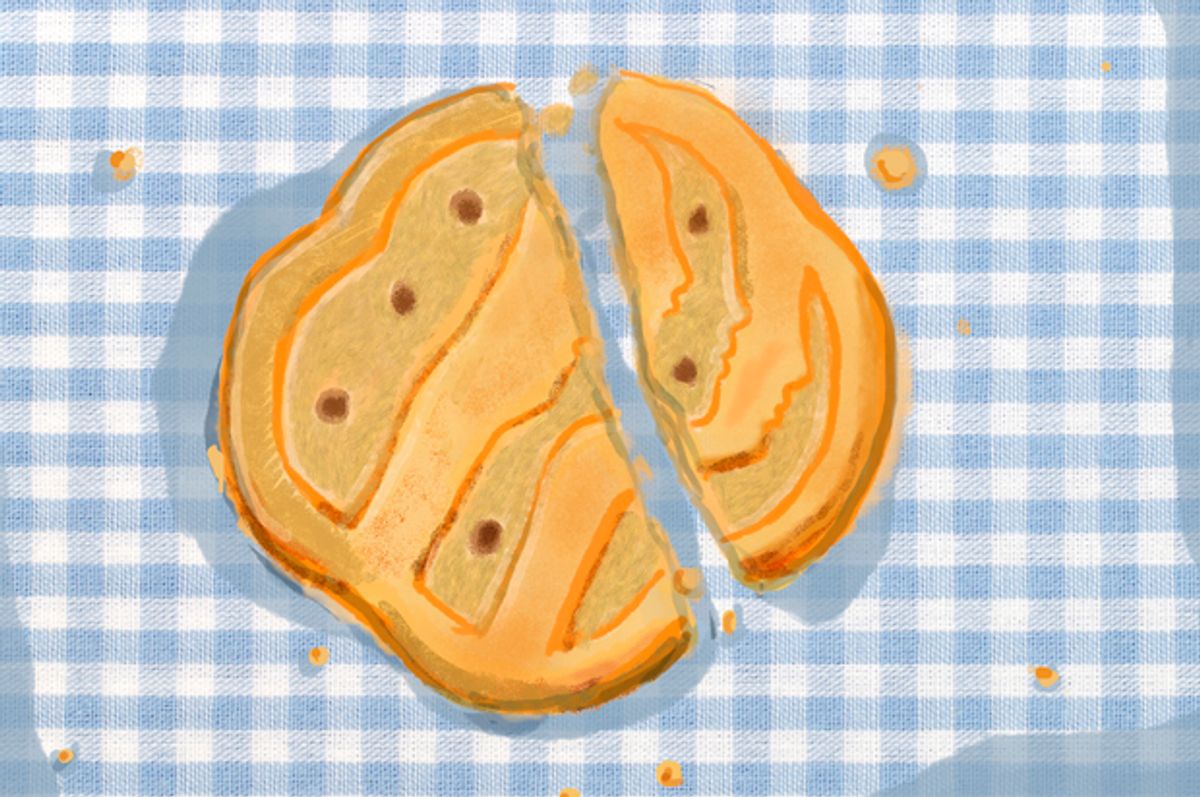 I hid the cookies in the dark space between my desk drawer and the floor. All 19 boxes of Samoas, Thin Mints, Peanut Butter, Shortbread and more in world’s tiniest cookie pantry.

I should’ve thrown them away. No 10-year-old needed 19 boxes of cookies. Just setting eyes on the brightly colored packages made my guts churn. They were souvenirs of my failure. But they were also tasty. So, I kept the whole stack; brought them out to munch on while I watched the small TV in my room. The plan was to eat half a box a day until all evidence was gone and the whole debacle could be put behind me.

Closed doors were allowed at my house, so sneaking — and, in this case, sneak eating — was pretty easy. And I was always grounded, so no one was suspicious if I’d just head down to my room after school, close the door, turn on "Duck Tales" and let the binge commence. Thin Mints first, because they were my least favorite, only selected to make the lie more believable. An assortment of cookie flavors connoted an assortment of customers. No need to let the troop leaders question that.

Not that it mattered anymore what they thought. My short-lived stint with Girl Scouts was over the same day I brought those cookies home.

There were about 12 other girls in the troop. At troop meetings, we sang songs and made homemade ice cream in old coffee cans. We learned to sew and babysit in order to earn badges. There was even a badge for makeovers. It was fun, but not what I'd pictured. I'd imagined archery or learning to start a fire without a lighter, or building a shelter with nothing but sticks and dry leaves. I'd thought there’d be camping and mountains and Indiana Jones hats. Basically, I had thought Girl Scouts was going to be like Boy Scouts. But it was the '80s. The world had not yet learned that girls, like boys, had an interest in outdoor adventures.

I was surprised to find out just how important a role cookie selling played within Girl Scouts. My friend Mallory sold over 2,000 boxes of cookies by the time of our first cookie sales check-in. We sat in a loose half-circle with the two troop leaders (Mallory’s stepmom and Dani’s mom) at our head. They had a giant whiteboard with every girl’s name listed in red marker. As we went around the circle, Dani’s mom wrote the current number of cookies sold by each girl. Fair-skinned Elena reported 600 boxes of cookies sold so far. Cindy was nearing 1,500. Even Margaret, the girl ever picking her undies out of her crack, had over 1,000 sales. When Dani smugly paused, and then said, “2,342 boxes,” her mom smiled so wide I thought maybe her face would get stuck.

With all the beaming and giggling and bonding — not to mention the potential to have one of those moms look at me like that — I knew what I had to say when my turn came. “And how about our new girl?” Stepmom looked at me; red marker poised next to my name.

I needed to go big, but not too big. The number had to sound real. No round numbers. And it had to roll naturally off my tongue. “996 boxes!” I said, and everyone clapped. I felt great for the rest of the meeting. It wasn’t until walking home later that I considered the magnitude of that number: 996. How the hell was I going to come up with… let’s see… 996 x $2.00… $1,992? I hadn’t even sold one damn box.

At 10 years, I was an only child. My brother didn’t come until a year later. When adults asked me if I had brothers or sisters, I liked to say, “I’m an only child, a.k.a a lonely child.” I thought it was funny, but adults often gave me an odd look, unsure how to take it. I was intense and needy: half misfit, half disheveled bookworm. My family was isolating and way too literate for the small Colorado town where we lived. We were all mentally ill, but didn’t know it yet. I came on strong to adults and sent unconscious signals that I needed rescuing. It made them uncomfortable.

Kids sensed my need, too. Once I tried to make friends with a girl, Hannah. She was quiet, with curly brown hair. Anytime I saw her in the halls or class I strived to make conversation with her.

At lunch: “Howsa bouta Pepsi?” I asked, grinning as I thrust a can in her face.

Or, in Foreign Language class: “Boy, that Ronnie is quite the schiesse, no?” I waggled my eyebrows as I’d seen Groucho Marx do.

I thought I was showcasing a sweet blend goof and wit, being charismatic. Yet after a week of putting my friendship heart on my best-buddy sleeve, her closest friend came up to me at my locker and set me straight.

“Hannah wants you to stop following her around,” she said, more to my shoes than my face.

“Of course, of course,” I stammered, and then went to the bathroom to hide in a stall and cry.

So I needed the whole Girl Scout thing to work out. Maybe they weren’t all my friends; maybe they felt I was kinda weird and didn’t mesh with them. They probably didn’t like my Walmart clothes or apparent lack of a comb, but they accepted me well enough, right? As long as I brought in that cookie dough, though.

And that simply wasn’t going to happen.

When the time came to turn in my cookie-sales sheet, the whole troop would find out I hadn’t sold any boxes of cookies, much less 996 boxes of cookies. There was no avoiding it, and it was gonna be humiliating. But maybe there was a way to soften the blow. I could stop eating lunch at school and save my lunch money until the deadline, and then buy some boxes myself. The deadline was two months away; how much could I save? Thirty-eight dollars. That would buy me 19 boxes of cookies.

Nineteen boxes was a pitiful amount, but what else could I do? I mooched tater tots and bread rolls off my small group of friends and hid my lunch money under the bed. It was a hard feat for someone who at 10 already displayed very poor impulse control. The truth was, I was still willing to work to have people think well of me, and I hadn’t yet learned it was easier just to quit things once they became uncomfortable. Or better yet, not even start what I knew I’d have to eventually, inevitably quit.

When the troop leaders initially announced the coming cookie season, I laid out the brochure and the tally sheet on my desk in preparation for the first day we could start selling. I even got my mom to agree to canvas the neighborhood with me. I envisioned the boatloads of cookies we’d sell together. Maybe we’d go for lunch at McDonald’s. Then we’d head back out, maybe hit up the nicer neighborhoods, perhaps even the one where my troop met, although Dani probably had that area covered. Whatever. We’d figure out a way outsell everyone else, and then I would get a new badge to sew onto my sash, right next to the other two. Maybe someday my sash would be full of badges, front and back, like Mallory’s. The future looked bright!

On the morning of cookie day, though, my mom came up into the kitchen, and I had, as usual, done everything wrong. I didn’t make her coffee right. I hadn’t emptied the dishwasher. The cats were fed the wrong amounts. The sugar bowl wasn’t entirely filled. I tried hard to avoid her in the morning because that was when she was most sensitive and most likely to go off on me. But we had to get a move on with the cookie stuff. I had on my coat, and underneath that my sash with the two badges sewn haphazardly in the center.

“You think I want to spend the day with you? You who lies to my face?” She slammed the cupboards, looking for her coffee cup. “Did you even clean your room like I told you?”

She stared at the half-filled sugar bowl, and her face grew strained. I knew all was lost. “What is the matter with you?” she yelled, flinging the sugar bowl at me. “I feed you, I clothe you, and what do I get for it? Nothing! You willful little shit. Go to your room, now! Don’t you dare come back up.”

I’d been grounded, just like that. For one day. Then two. Then three. Four. Five. On day six I was freed. I tried to conjure up some cookie mojo, but the moment, or whatever I thought the experience was going to be, had vanished. All those other girls had family buying their cookies. Their parents took the tally sheets to work and made co-workers buy boxes. Their moms set up tables at the grocery stores every weekend. Everyone had a weeklong start on me, and everyone had someone to help them.

Still, I trudged door to door, even though it was raining, and most people were at work. Mrs. Edders opened the door a crack, peered down and almost felt sorry for me, but declined at the last moment. No one in my neighborhood wanted cookies. They were all too tired and poor and paranoid that I was scheming them somehow. After a few hours of rejection, I went to the nearby lake and hung out there long enough that my mom would think I had spent the day selling cookies. The first troop check-in was a few weeks away, and I would be reporting a big, fat zero.

Two months after my lie, after no lunches and yet also too many tater tots, I brought my crumpled dollar bills, pile of loose change, and meager tally sheet to the grand cookie finale. Everyone was very animated. The girls crowded around a table that had cookie boxes stacked up at different heights, like a model cityscape. They were taking turns handing in their sheets and announcing their final tally. Dani’s mom called my name, and I gave her my sheet. My face was already stinging red. She looked at it and frowned.

“What’s this? You said...” Everyone quieted.

“I got grounded,” I started. I looked around at all their faces. So open. So puzzled. There was no way I was going to be able to explain it to them so they’d understand. Instead, I placed my wadded up bills and coins on the table. I walked to the whiteboard, erased the “996” next to my name and replaced it with “19.” I went back to the table, counted out 19 boxes of cookies, piled them into my arms and left with as much composure as I could muster.

It was a long walk home.

Amy Bee regularly writes for the Sacramento News & Review and her work has appeared in NANO Fiction, Indiana Voice Journal, and The Manifest-Station. When she isn’t writing, Amy likes to backpack long distances and marinate in her constantly nagging existential worries. Find her worries at www.lionbythetail.com and her backpacking at www.mountainsforbreakfast.com