In "Game of Thrones," salvation is left up to the least favorite children

Here's to the strays, the illegitimates and the lame, for they shall inherit Westeros 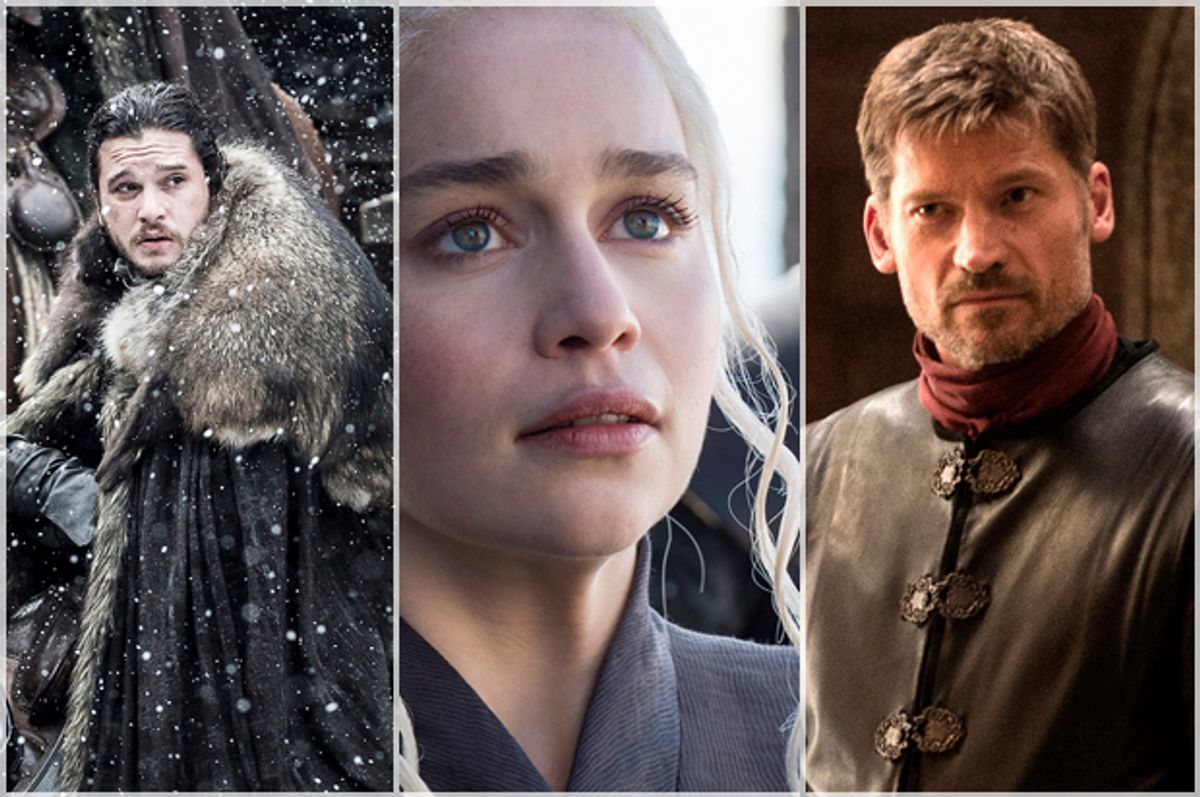 When the seventh season of “Game of Thrones” begins Sunday at 9 p.m., only a fortunate few will have a clue where the story picks up with remaining Starks — that is, Arya, Bran, Sansa and Jon Snow, who is actually part Targaryen. Where Jon's aunt Daenerys Targaryen and her army have landed, or what will happen once Tyrion Lannister comes face to face again with his brother Jaime and sister Cersei, has yet to be seen.

These are the major players left on the board in “Game of Thrones,” and not a one was expected to amount to anything much when the series began. With the exception of Jaime and Sansa, the surviving Starks, Lannisters and Targaryens standing with and against each other aren’t coddled heirs or family favorites. They’re the throwaway kids. The also-rans. The mistakes and forgotten. As the war for Westeros boils to its climax, the land’s collective fate has come down to these unlikely remainders — the cripples, bastards and broken things.

In this regard these seven new episodes may give viewers even more with which to vicariously identify than the six seasons that have come before them, because the infuriating sensation of being underestimated is universal. For sons and daughters made aware that we’re not supposed to be here — and we are many — that truth creates a unique fuel that informs everything we do.

And “Game of Thrones” is lousy with characters from whom the audience expected little to nothing, who began the series on the fringes but steadily have been pushed to the mainstage.

Many of the lines of ascension are in disarray in Westeros, and the ruling houses are all but wiped out or scattered. Gone are the Baratheons and most of the Tyrells. Theon (Alfie Allen) and Yara Greyjoy (Gemma Whelan), heirs to the Salt Throne, are fugitives on the run from a murderous uncle. The Martells have been murdered. Only houses Stark and Lannister remain intact, and just barely. Bran Stark (Isaac Hempstead Wright) is a paraplegic being pulled upon a sled somewhere up North. Arya Stark (Maisie Williams) is a stray and freelance assassin; for all anybody in Westeros knows, she and Bran are both dead.

Bran may not have the use of his legs, but stands to be more of a savior to Westeros than his half-brother (cousin, in fact) Jon Snow (Kit Harington). Jon and Sansa (Sophie Turner) have retaken the family seat, bringing Winterfell under the banner of Stark once more. But Sansa is a Bolton by marriage, and Jon only won the allegiance of the other Northern families by triumphing in battle.

All are key players in the drama’s approaching endgame, all the same, as are Samwell Tarly (John Bradley-West), Jon’s portly, bookish ally; Brienne of Tarth (Gwendoline Christie), the lady who preferred to train as a swordfighter, and Sandor Clegane (Rory McCann), the brawler whose older brother Gregor seared his face in a fire when they were children. Gregor was knighted nevertheless, providing his sibling a bitter lesson about the way this world works.

Both Cleganes have defied death, The Hound purely by luck. But the latter’s continued existence is one of many object lessons of the freedom that comes when a person has little to nothing expected of them. Being beholden to nobody but one’s self makes a person fierce and dangerous, and that's the only kind of character that has a chance in the war to come.

Savagery and ruthlessness, as they’re detailed in the TV series and the books that inspire it, “A Song of Ice and Fire,” receive the lion’s share of critical examination, and certainly more so since "Game of Thrones" became a global phenomenon. Series creators D.B. Weiss, David Benioff and a number of executives focused on serving “the perv side of the audience” and spent five seasons pushing the series in an increasingly lurid direction that emphasized carnage, rape and sexploitation.

They alienated and outraged viewers in doing so, but they also obscured the level of empathy with which “Game of Thrones” author George R. R. Martin realized his characters and their plot trajectories. Even the basest antagonists legitimately earn a sliver of pity in the books, inviting the reader to understand that who they are is a product of the slights and indignities they’ve endured.

Martin’s sensitivity to the vulnerabilities of these lesser children of great houses facilitates the audience’s connection with their conflict, especially two of the main players who are center stage in this world, Cersei Lannister (Lena Headey) and Daenerys Targaryen (Emilia Clarke). Despising the former is sport; she’s obdurately wicked. But both possess admirable qualities, chief among them ambition and lethal levels of confidence,  especially given that neither should have amounted to anything more than bargaining chips.

If the late Lannister patriarch Tywin had his way, Cersei would be married to a Tyrell in order to secure the second-wealthiest family’s allegiance and to keep her safely removed from matters of state. Now she sits on the Iron Throne, perhaps without the blessing of her brother Jaime (Nikolaj Coster-Waldau), who quietly agonizes over the amputation of his sword hand. For most of his life Jaime defined his worth by his prowess on the battlefield and the loyalty he bears for Cersei; now he's uncertain of both.

Many more people embrace Daenerys than Cersei, and not just because of Dany’s dragons. Cersei was born into wealthy, while Daenerys clawed her way up from irrelevance, transforming herself from beggar queen to the Breaker of Chains. Hatching three dragons didn’t hurt, of course, but that could not have happened if she hadn’t had an inkling that she might contain the mojo that renders her flameproof.

But Dany’s struggle, one that attracted the exiled Tyrion Lannister (Peter Dinklage) to seek her out and offer his service, lies in the negotiation of rulership. And “Game of Thrones” is about power first and foremost; who wields it and what they do to secure it, how it poisons the better parts of our nature and how it makes those who obsess over it blind to greater disasters.

But in Westeros a surname only carries a person so far, and as the series nears its final hours many the old family titles mean next to nothing. Sam may hold his family’s Valyrian steel sword — his birthright — but it’s useless in his clumsy clutches.

Tyrion has the heart and mind of a ruler, but a small stature. (Tywin once referred to him as a “lecherous little stump.”) In a just version of existence Tyrion’s physique would not prevent him from being king, but Tyrion is cruelly and regularly reminded that his genius and open heart have no value in King's Landing, and his father and sister Cersei never forgive him of his twin crimes of being a little person and killing his mother in childbirth.

And Jon Snow isn’t the only illegitimate child sitting at the head of a noble family’s table these days. In Dorne, the Sands — illegitimate daughters, all — occupy Martells lands and have allied themselves with Olenna Tyrell (Diana Rigg) at the behest of King’s Landing’s spymaster Varys (Conleth Hill), another unwanted child who made himself into the most important servant of the realm.

Fantasy overflows with heroes who rise from the ranks of commoners; stories of squires and scullery maids who become kings and queens abound. But in many cases their greatness is preordained. They are children of noble parents who loved them and died or lost them somehow. The remainders approaching the battlefield in Westeros are a more compelling lot, in comparison. Their duty to family name and house, where those still exist, pales in comparison to their charge to ensure the survival of the realm. They are beholden to no one and nothing but their own desires — for glory, for vengeance, for success against the undefeatable. Their assumption of the reins could make this coming season’s story uniquely provocative, and it’s almost a foregone conclusion that any losses from this point out will produce a lasting sting. That’s the rub with the throwaways of the world, isn't it?  They deserve better than the lot they're given. Broken things can also be unpredictably dangerous, too, and in the coming night that's dark and full of terrors, they're exactly what the game requires.