Is Putin funding anti-fracking groups? Republicans think so — and so did Hillary Clinton 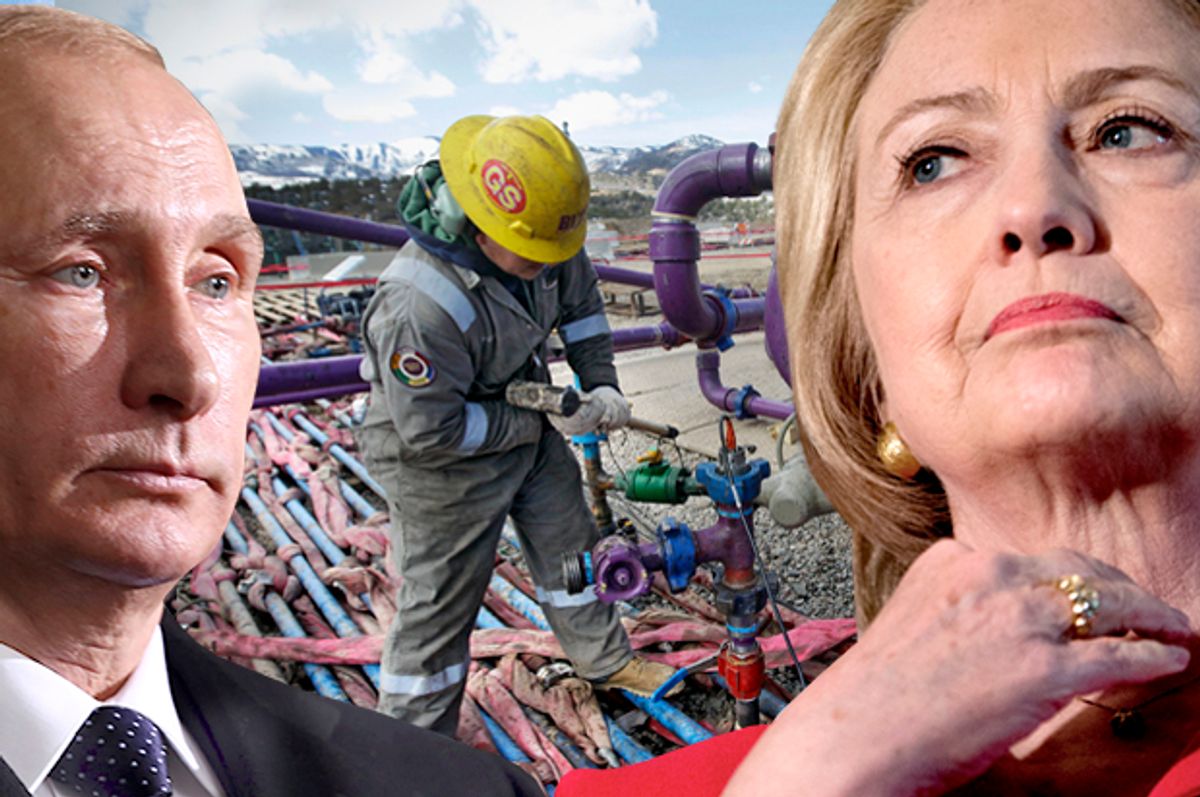 Does Russian President Vladimir Putin want to stop hydraulic fracturing, or “fracking,” in Western nations the same way he allegedly wanted to harm the electoral chances of 2016 Democratic nominee Hillary Clinton? According to two Texas Republican congressmen, the answer is yes.

It’s entirely likely that the open letter on this subject sent by Reps. Lamar Smith and Randy Weber on June 29 to Treasury Secretary Steve Mnuchin was partly motivated by a desire to shift public attention from President Donald Trump’s burgeoning Russian-influence scandal. But the allegations have some support from non-Republicans.

One person who appears to believe that the Russians are interested in stopping oil and gas extraction via fracking, in fact, is Hillary Clinton herself. In a private, paid speech delivered in Canada on June 18, 2014, the former secretary of state denounced “phony environmental groups” she claimed had been created by Russia to oppose fracking.

“We were even up against phony environmental groups, and I'm a big environmentalist, but these were funded by the Russians to stand against any effort, oh that pipeline, that fracking, that whatever will be a problem for you, and a lot of the money supporting that message was coming from Russia,” Clinton said, according to an excerpt from the speech created by her presidential campaign staffers.

It is unclear what region of the world Clinton was discussing, since the full text of her speech has never been made available by Clinton or by tinePublic, the Canadian marketing firm that paid her to deliver it. Ironically, the excerpt that is publicly available was among the tens of thousands of emails released by WikiLeaks, allegedly thanks to the efforts of Russian hackers who copied them from the email account of John Podesta, Clinton’s former campaign manager.

Clinton’s speech was delivered to an audience in Edmonton, the capital of Alberta, the Canadian province that produces more petroleum than any other within the country.

Anders Fogh Rasmussen, the former secretary-general of NATO, has also accused Russia of interfering in European political discussions of fracking. In a 2014 speech delivered in the United Kingdom the day after Clinton’s address in Canada, Rasmussen told the Royal Institute of International Affairs that he had information that Russia had been funding anti-fracking campaigns in Europe to stop extraction of oil from shale rock. Russia is one of the largest exporters of oil and natural gas in the world.

“I have met allies who can report that Russia, as part of their sophisticated information and disinformation operations, engaged actively with so-called non-governmental organizations -- environmental organizations working against shale gas -- to maintain European dependence on imported Russian gas,” Rasmussen said. He did not present any evidence for his allegation.

Fracking debates were also mentioned in the report issued by America’s intelligence community on Jan. 6, 2017, that formally accused Russia of being behind several hacks of the Democratic National Committee as well as the Clinton campaign. That document, released by the Director of National Intelligence (DNI) two weeks before Trump assumed office, contained an appendix discussing what it said were extensive Russian efforts to undermine Americans’ faith in their electoral system and to impact American political discussion.

One of Russia’s key means of influencing American political debate is through its international television channel, RT. With regard to fracking, the intelligence report said that the network “runs anti-fracking programming, highlighting environmental issues and the impacts on public health.”

According to the report, Russia is interested in reducing oil and natural gas production around the world in order to protect Gazprom, one of several energy-producing companies that are owned by its government or by people connected to Putin.

As in the case of the allegation that Russia hacked the Democrats, the DNI report did not provide specific unclassified evidence for these assertions, even though some evidence did exist at the time it was released.

The ambiguity in various government statements about Russia’s alleged election interference and its desire to stop fracking in Western nations has allowed partisans on both sides either to dismiss the idea or to make statements that go well beyond the available facts.

In the case of fracking, the letter from Smith and Weber utilizes the Clinton and Rasmussen statements referenced above, pulling them out of context. The congressmen's evidence that American environmental groups have taken Russian money to oppose fracking comes from a fake conservative think tank called the Environmental Policy Alliance that is essentially owned and operated by Rick Berman, a Republican lobbyist best known for defending the tobacco industry and attacking Mothers Against Drunk Driving.

Berman’s group itself does not disclose who its donors are. In 2014, he even boasted to a conference for energy industry executives that contributions to his efforts would never be publicly disclosed. “We run all this stuff through nonprofit organizations that are insulated from having to disclose donors. There is total anonymity,” he said in a leaked speech. “People don’t know who supports us. We’ve been doing this for 20-something years in this regard.”

Citing research conducted by Berman’s organization, the two GOP congressmen claim that several American-based environmental groups accepted money from an organization called the Sea Change Foundation, which in turn obtained it from a Bermuda-based company called Klein Limited. According to Smith and Weber, the executives at Klein are closely linked to Russian oil and gas companies.

A representative for the Sierra Club, one of the nonprofits accused in the letter, confirmed that her organization had received money from the Sea Change Foundation in 2010 and 2011, but strongly denied that the funds had come from anyone connected to Russia.

“We double-check confirmed that the origin of the funds we’re getting from Sea Change is through a donor, not from Russia,” Melinda Pierce, the Sierra Club’s legislative director, told Salon. “It’s a private U.S. citizen who cares about climate change and has invested in the kind of work that the Sierra Club does to move us off dirty energy to clean energy.”

Pierce said she was not authorized to name the donor.

The Sierra Club has acknowledged receiving more than $25 million from Aubrey McClendon, the late CEO of Chesapeake Energy, between 2007 and 2010 to fund its “Beyond Coal” campaign to close coal-powered electricity-generation plants. The group ended its relationship with McClendon at the end of 2010 under pressure from its members. According to Pierce, the Sierra Club now has policies in place that prohibit donations from individuals or companies affiliated with polluting industries.

In an email to Salon, the Sea Change Foundation confirmed that it had received funds from Klein but said that the money was not supposed to be used for fighting fracking:

A source familiar with the foundation’s operations said that the group has not focused on fracking in its environmental advocacy efforts.

“Our firm has represented Klein since its inception, and we can state categorically that at no point did this philanthropic organization receive or expend funds from Russian sources or Russian-connected sources and Klein has no Russian connection whatsoever,” he wrote in an email to Salon.

“The making of false allegations of the nature described is actionable and Wakefield Quin Limited will take such steps as it deems appropriate to prevent the distribution and dissemination of such falsehoods,” he wrote.

While Russia’s RT channel frequently denounces fracking, the country’s largest oil company has signed a deal with ExxonMobil to use fracking as an oil-extraction technique. The CEO of ExxonMobil at the time that deal was negotiated was Rex Tillerson, the current secretary of state.