What’s really in your dog’s food? You probably don’t want to know

I am that obnoxious person who buys organic food. For my dog. Seriously, though — I have my reasons 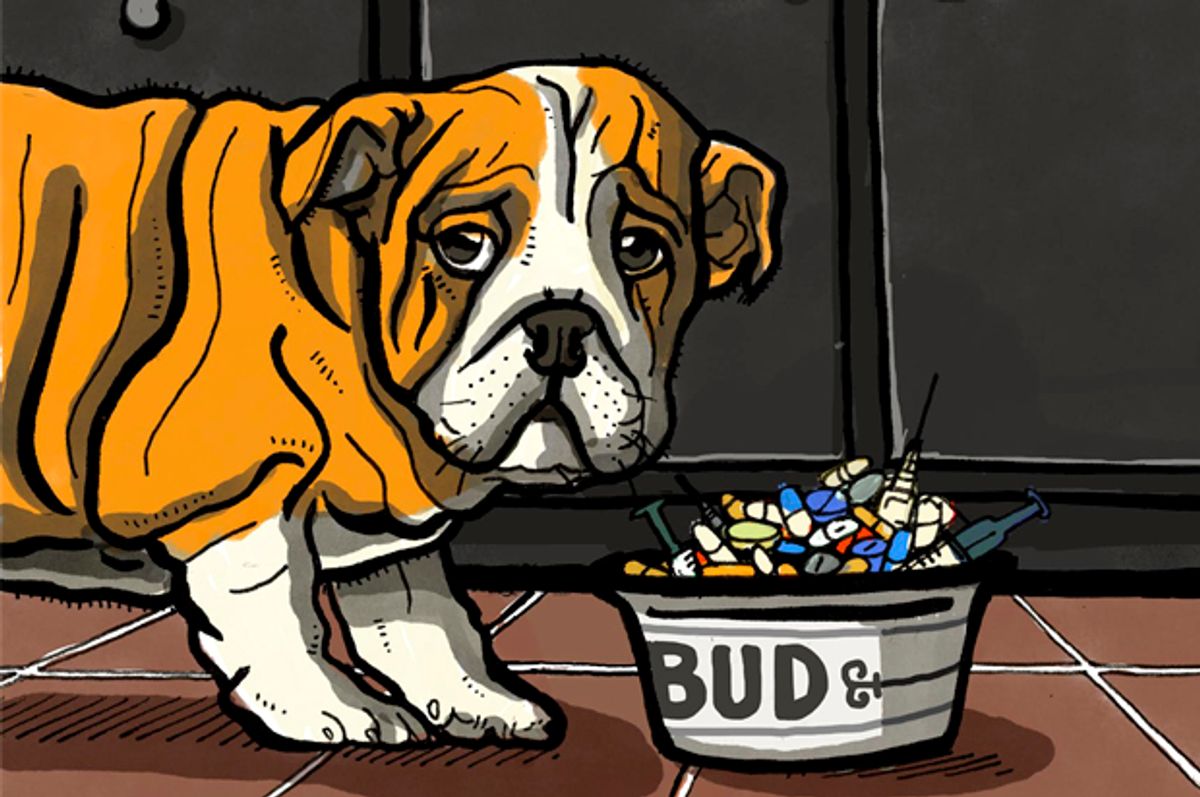 I’m just going to come right out and say it: I feed my dog organic food.

I’m only semi-embarrassed to admit it. Hold off on the angry comments and bear with me for a few minutes.

In February, a family dog in Washington state died after eating canned dog food that was later shown to have contained large amounts of pentobarbital — a drug used to euthanize animals and execute prisoners on death row.

It happened because pet food manufacturers are still getting away with feeding dogs as if they were living trash cans — and pet owners continue to be duped by fancy marketing that peddles even the most horrendously unhealthy products as nutritious offerings for dogs and cats.

But how, specifically, did pentobarbital get into the dog food? To answer that you need to know how most pet food is really made — and when you open that can of worms (so to speak), you might regret it.

When I started to research the pet food industry about six months ago, I sent myself into a spiral of confusion about what to feed my dog. I’m aware this is probably as big a First World problem as you can get. But yes, I want my dog to be healthy. I figure if she’s healthier, my vet bills will be lower down the road.

Pet food companies go to a lot of trouble to convince consumers that their ingredients are the best and most delicious thing you could ever feed your dog. The catch is, they aren’t legally required to tell you what’s actually in the food. If you’re eating lunch, you might want to come back to this later.

Most people are probably at least vaguely aware that the meat that goes into dog food is the stuff that’s not fit for human consumption. What many don’t know is that the meat often comes from a rendering plant where it was thrown into a massive vat with — wait for it — euthanized dogs and cats, roadkill, diseased farm animals and expired and rejected meat from supermarkets. You read that right: In some cases your dog might be eating other dogs.

It gets worse: The plastic packaging on expired meats, livestock tags from dead animals, and flea collars all get thrown in, too. Since most of the animals that end up in a rendering plant had health problems, drugs like antibiotics or steroids — not to mention pentobarbital — can end up in your dog or cat’s food. So, when you see words like “animal by-product meal” on a pet food label, there’s a good chance there are some very nasty ingredients inside.

This highly unpleasant concoction is blended together at the rendering plant and heated at intensely high temperatures until it no longer resembles meat at all. This kills a lot of the bacteria, but it also renders the food nutritionally deficient. To remedy that, manufacturers add vitamin and mineral supplements to the food and then spray the resulting sludge with something tasty-smelling like chicken fat to appeal to a dog’s nose. Then it’s poured into bags with pictures of juicy steaks on the front and words like “healthy” and “natural” and “delicious” to entice pet owners who want the best for their animals.

You might think, well, why are pet food companies allowed to dupe people so badly? It’s a good question. A 2016 documentary called "Pet Fooled" did a deep dive into the industry and found that it is set up almost entirely for the benefit of pet food corporations, while providing only the absolute bare minimum in quality, nutrition and public information.

Take the fact that any product containing the word “flavor” on the label can, legally, contain no meat. That’s right, no meat at all. Yet, the company is still allowed to stick a picture of a steak on the bag. Any product using the words “dinner,” “nugget” or “formula” is only required to contain 25 percent meat — and anywhere you see the word “with” on a dog food product, there may be as little as 3 percent actual meat inside.

Pet food regulations are very similar in the U.S. and the European Union. Both, for example, state that it is illegal to allow material from animals that have not passed veterinary inspection to enter the food chain. The difference is, the EU seems to enforce the law, where the U.S. does not. The FDA is supposed to regulate the industry, but the agency has shown very little interest in doing that.

Of course not all pet food companies are bad. Some care more about where their ingredients come from. Some sell higher quality products. But when the baseline is this low, higher quality doesn’t always mean truly healthy.

There is some good news, though. New companies are entering the market promising to do things in a more ethical, transparent way — and the pet owners who have sought them out are ready to hold them accountable.

There are other positive trends, too. "Raw feeding," which many experts believe is the most species-appropriate way to feed dogs and cats, is becoming more widespread. Interestingly, the FDA seems more concerned with issuing warnings and propagating myths about the dangers of raw feeding than it is with the massive problems within the processed pet-food industry, where the vast majority of recalls for contamination have been taking place for years.

Many holistic vets are sounding the alarm about the dangers of processed pet food, which, aside from causing the deaths of beloved family pets, are being linked to an obesity epidemic in dogs and cats — and a litany of other health problems.

Now, back to that thing I said about feeding my dog organic food. I don’t do it because I’m a health nut. I’m just kind of obsessed with my dog. I’ve read so many horror stories that I’m willing to fork out for the best stuff I can afford. Then I go and order myself a pizza. I’m fully aware that this makes no sense — and even more aware that it’s easier to get picky about dog food when a small dog is the only living thing that you’re responsible for feeding.

Until then, they will continue to profit off people’s love of their pets, while sending contaminated or unhealthful products onto pet store shelves.