When someone destroyed our pride flags, our tiny town sprang into action

We don’t know who’s been vandalizing the rainbow flags, but we learned something about kindness from the response 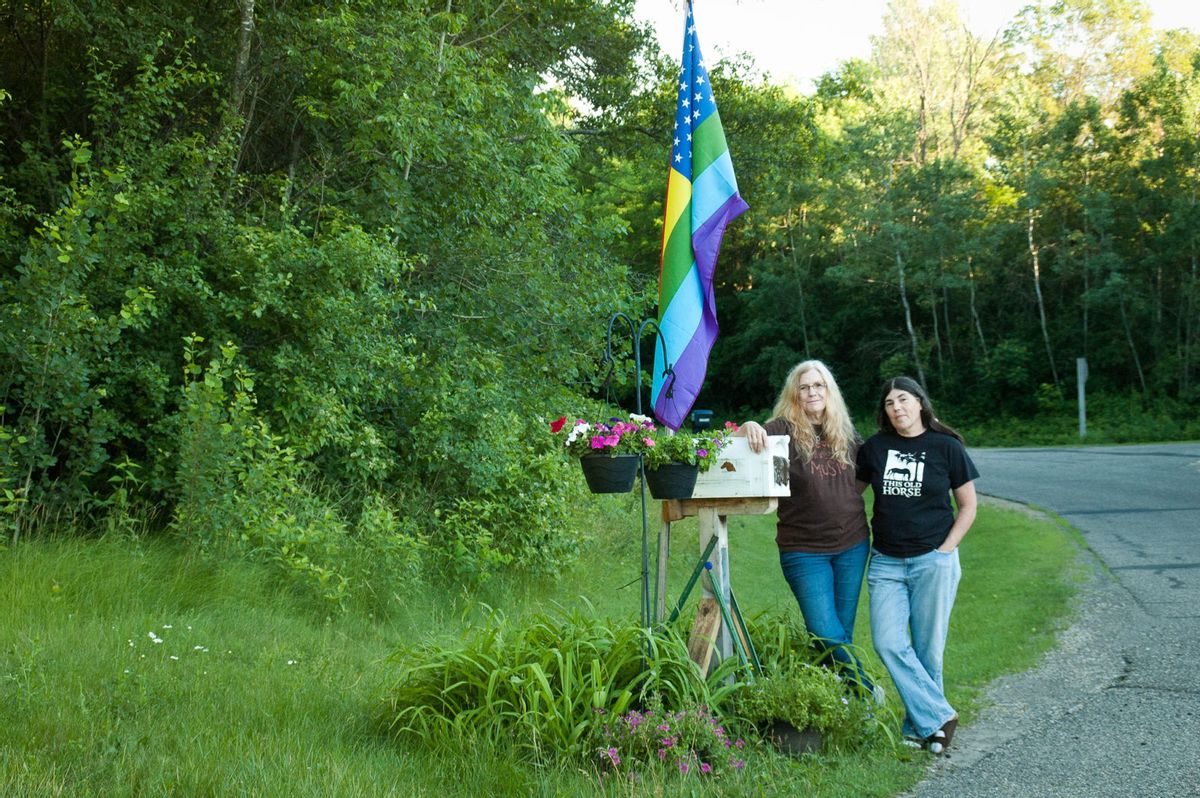 The author, left, and Wendy, with their flag at the end of their drive. (Chris LeRoux/Narratively)
--

Come see!” my spouse, Wendy, calls to me from the top of the drive. We are doing winter clean up and I have no idea what she is up to.

“Just come look!” Wendy comes past the trees to where she can see me and waves for me to come. She’s wearing jeans, work boots, one of her many, old, marathon finisher t-shirts and holding a bright yellow deWALT drill.

When I crest the hill and see what she’s done, it feels like the moment in “The Wizard of Oz” when the world goes from sepia to technicolor.

“What do you think?” Wendy asks, her eyes twinkling and a satisfied grin on her face.

“It’s beautiful. Wow! You really got it up there.” In our salvaged wood pile at the barn she found a sturdy, 12-foot one-by-one, planted it in the ground, and anchored it to our mailbox post. Now, high above our weather-worn, hand-painted mailbox, the rainbow flag flew, waving in the breeze, its happy colors bright in the sun.

I’m surprised at how moved I am by the sight. We’ve been together for 27 years, but this is the first time we’ve raised a flag.

“It really is beautiful,” I say, “and a little scary.”

“Well, you know . . .” She follows my gaze, taking in the houses on our street and, by mutual understanding, the world around us.

Her gaze clouds, so fleeting you wouldn’t notice it if you didn’t know her well — a lifetime of this. In an instant, her eyes go from a little sad to a lot resolute. She shrugs, her chin jutting out. A simple movement. It says, let them come.

It’s the New Yorker in her. She’s always been the tougher one.

Read more Narratively: The Guy Who Played the Red Power Ranger Killed His Roommate With a 30-Inch Sword

As each day goes by and I see those beautiful rainbow colors still dancing in the wind it makes me happier. I felt a little more . . . free and . . . safe. It starts to seem like it has always been there.

In our small town of Hudson, Wisconsin, in response to fear and hate, acts of bravery and kindness were growing. On one street, a couple of weeks ago, a Pride flag was torn down and stolen. In response, several neighbors chose to fly flags in support and solidarity. Then, those flags were torn down and a couple of them were burned on the front lawn.

In response to that, one of those neighbors, Rebecca Bonesteel, started a Go Fund Me page to buy more rainbow Pride flags. The flags would be free to anyone wanting to display one. Donations poured in, and that is how we got our flag. I really liked the idea. For every flag that was torn down or burned, two or more would go up — kind of like the dandelions in our yard.

We live outside the town proper, on ten beautiful acres of farmland at the very border of Hudson Township. The land all around us was sold off to real estate developers decades ago. Our road is one of only two that lead into the neighborhood and we don’t get a lot of traffic. It is no exaggeration to say that we can go months with no one coming to our door who isn’t either delivering something or a Jehovah’s Witness. We are heading out to walk the dog when a car pulls down the drive.

A dark-haired woman with a furrowed brow gets out of the car. She’s wearing tight jeans and a sweatshirt. Definitely not a Jehovah’s Witness. She is vaguely familiar; I wonder if I met her at the annual neighborhood potluck. She points up the driveway.

“Did you know your flag is gone? Somebody tore it down and knocked over your mailbox.”

We all walk up to survey the damage. We do that thing where we just kind of stand and stare at it in disbelief. Her name is Mary and she lives up the road.

The end of our makeshift flagpole lies in the dirt; bits of color hanging limp, their edges jagged where the razor blade had severed the flag from its mooring. It had only been up a week. They took the flag with them.

“Thanks for letting us know.”

“This is awful,” she says, “I just read about the flag burnings in the paper.”

Thinking this is the perfect time to offer, I say, “We have some free flags if you want to fly one in solidarity.”

Neither of us push it. We understand. Why make yourselves a target?

We’re all still just staring at the destruction. A familiar weariness settles in my soul. On the scale of things that have been done to me because I am gay, this hardly even registers, but I’m starting to get angry. I’m fed up with cowardly and mean. If this was meant to scare us into hiding, it backfired. When I’m done fixing the mailbox, they are going to need a truck and chain to get our beautiful flag down.

We leave the flagpole in the dirt and head out on our dog walk. We meet a neighbor whose name we don’t know, but our dogs know each other. Her big yellow lab rolls over in submission to our little terrier. While they sniff and lick, we tell her about the flag. She shakes her head, “What’s wrong with people? Who would do a thing like that?”

Ours eyes meet. We don’t know who came with their razor blades in the night to tear down our happy little flag — but we know it could be anybody.

Our walk is a bit over a mile. There are 30-some houses of all kinds along the loop, many of them backed up against the woods or at the edge of acres of grasslands. It’s a lovely walk where bluebirds and goldfinches will feed on roadside thistle in the spring and deer paths head off the side of the road. I know we are both thinking the same thing — we simply don’t want to imagine that any of our neighbors would do such a thing. We want to believe that these are good people. We may not all see eye to eye on everything but who does?

We pause at the top of the hill to take in the view of the valley below. This is the place where, years ago, two little girls found an abandoned kitten. Their mothers told them to put it back or bring it to us. They knew we would take care of it.

Wendy says, “Maybe it was teenagers.”

I nod and remember those boys in high school like it was yesterday. Older boys. Their bodies twitching, bouncing on their toes, electric with energy — small, quick movements of torso, arms and fists — their voices loud and brash, laughing and bragging about how they “saw some old faggot,” followed him home, pushed in the door after him and trashed his apartment after they beat him unconscious. They were almost giddy. They knew a ‘faggot’ couldn’t call the police.

I’m certain I’ve told Wendy the story before, but I don’t mention it now. She has her own scars. I’m trying to shake it off when I realize that happened over half a century ago. I’m stunned. All these years, that moment has been frozen in time. Those boys, if they are still alive, are now in their late sixties. I wonder how it makes them feel to remember what they did that day. I wonder what they taught their children.

The fickle weather this time of the year is always hard on me. Last weekend was warm, sunny and clear. We raised our flag and did chores in t-shirts. Today, I am bundled up, but I just can’t keep the chill away. It feels that way emotionally, too.

The Deputy Sherriff is not pleased. He stands by his cruiser at the top of the drive holding the end of the abandoned razor blade between his thumb and forefinger. I am mesmerized by all the small pockets on his crisp brown vest and the day-glow yellow “SHERIFF” across his left breast pocket. His salt and pepper hair is close-cropped, official. He has a neat Vandyke beard and tiny laugh lines at the corners of his eyes. His face is a marvelous combination of soft and rugged. I have an odd urge to kiss him on the cheek. “It’s happened in town,” he says, “but this is the first time we’ve heard of this in the Township.” He looks over our heads at the damage and almost seems to be talking to himself. “We can’t have this kind of thing happening in our community.” I feel so much better as he shakes my hand. He means business.

Before we know it, Rebecca Bonesteel’s whole family is at our door bringing us a new flag. They are so distressed that this happened to us, and I honestly wish I could share their shock and outrage. I just feel kind of numb and, I realize, a little disappointed. The girls let our crazy little dog lick their faces and squirm in their arms. We bundle them up and take them down to meet the horses and feed them treats and for once I am warm enough.

Wendy shows the girls how to hold the horse treats. Her hands are callused from all the work we do here and she cradles their small soft fingers protectively in her palm. There are lines around her mouth now, and just yesterday I noticed the unruly grey sprouting in her rich brown hair. One of the girls lets out a little squeal as the horse nuzzles her hand. Wendy smiles at me and I smile back. I lean against the barn watching them and I think about flags, and family, and love. Love isn’t some delicate hothouse flower that requires the perfect conditions to thrive. Love is wild and tough, messy and glorious, with deep roots and countless feathered seeds that will fly whether they are freed by the toe of a boot or on the softest breath of a wish. Love is unstoppable. Like dandelions.

The day has been unnerving. Emotionally exhausting. Now that everyone is gone we just want to curl up with the critters and do something mindless, like watch reruns of “Buffy the Vampire Slayer” on TV; be somewhere or someone else for a while. But, just as we start to settle, the doorbell rings. I am adding rice to the pot of water and Wendy is feeding the cats. I know we’re both thinking, What now? I’m coming out of the kitchen as she answers the door.

It’s Mary again, from this morning, but she is not looking distressed. As a matter of fact, she has a rather stunning smile I am seeing for the first time. She says, “I hate to disturb you, but we talked about it and if you’ve got enough can I have two flags?”