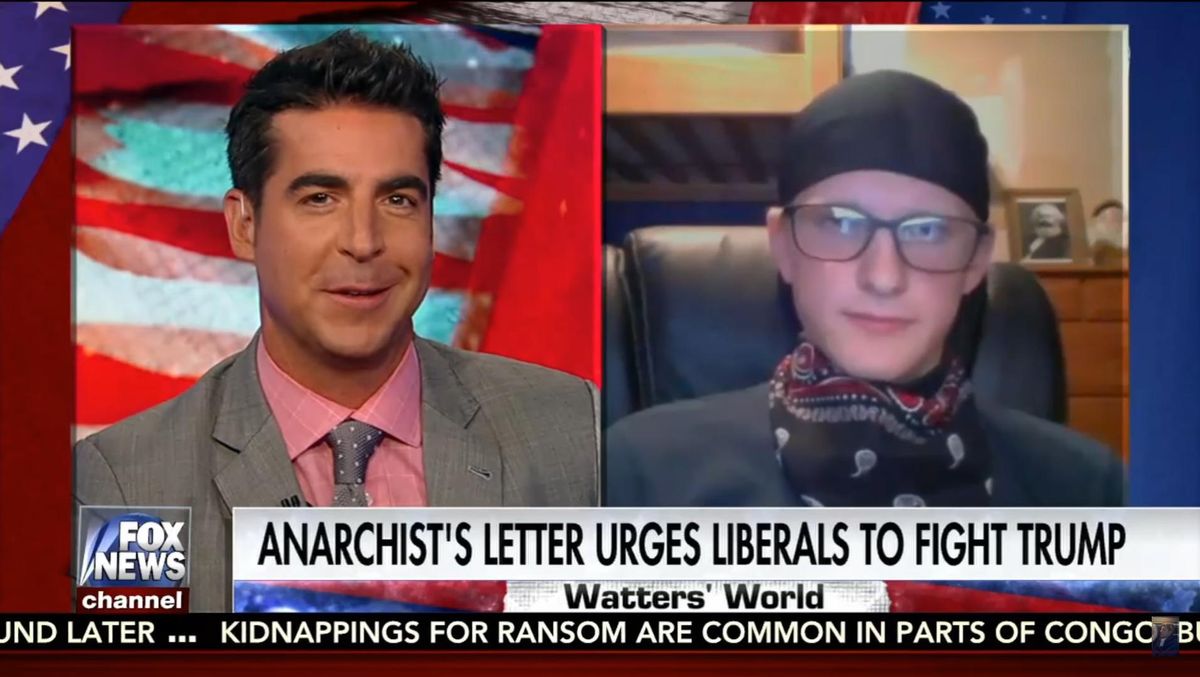 Used to trolling teenagers and buzzed beachgoers, Fox News host Jesse Watters clearly met his match during the Saturday airing of his standalone show "Watters' World," as he got trolled hard by an alt-right YouTuber posing as a member of the radical-left "antifa" movement.

The entire five-minute segment is completely cringe-worthy, as the very self-impressed former Bill O'Reilly producer clearly had no idea that he was being taken for a ride by an alt-right troll who calls himself BG Kumbi but who gave the name "Kevin" to Watters' producers.

There were lots of things that should have tipped Watters and his staff that they were the subjects of a ruse. Had they bothered to do a single Google search, they would have found that the "Boston Antifa" group with which Kumbi claimed to be affiliated is actually a satire website run by racist right-wingers living in Oregon. Literally the third result is an article debunking the fake antifa collective.

A better informed production team would also have realized that antifa activists never do media interviews without wearing some sort of facial covering. The kitchy picture of Karl Marx that Kumbi had behind himself ought to have been another clue as well.

But Watters barreled into the interview with vigor, blissfully ignorant of what was about to happen to him. The most ridiculous moment was Watters' attempt to challenge Kumbi about an incident that took place in Pennsylvania when an antifa activist stabbed a horse with a flag pole.

"OK, what about when an antifa member stabbed a police horse in the neck with a knife. Was the horse a racist Trump supporter?" Watters asked.

"I didn't know horses could vote," Watters said as he broke out into a chuckle and a broad smile.

After bantering further with the fake activist, Watters then tried to pin the radical anarchist group on Democrats.

"Who did you vote for in the election," Watters asked. "I'm sure she's proud to have you," he replied after Kumbi said he'd voted for Hillary Clinton in 2016.

Watters ended the clip inviting the Secret Service to come and investigate "Kevin," forgetting that Fox News has devoted hours of outraged coverage to CNN declining to reveal the private information of a man the network incorrectly believed had created a video tweeted out by President Donald Trump.

"Well, I don't know if the Secret Service is watching," Watters intoned. "But maybe they should take a closer look at you, Kevin."

The ridiculous interview has since been promoted by Fox News Insider, the "official blog of Fox News Channel." Glenn Beck's TheBlaze publication featured the embarrassing video under the headline "Watch: Jesse Watters uses facts to school Antifa member who wants to use violence against Trump." Sarah Palin's clickbait website has also unironically spotlighted the clip.

We'll see if Watters ever bothers to issue a correction after this incident. One person who could certainly use an update is President Trump who according to reports was watching the Fox News program over the weekend.