How "Being Mary Jane" becomes the new "All About Eve"

In BET's series about a woman's power and place in the workplace, Gabrielle Union evokes empathy for the climber 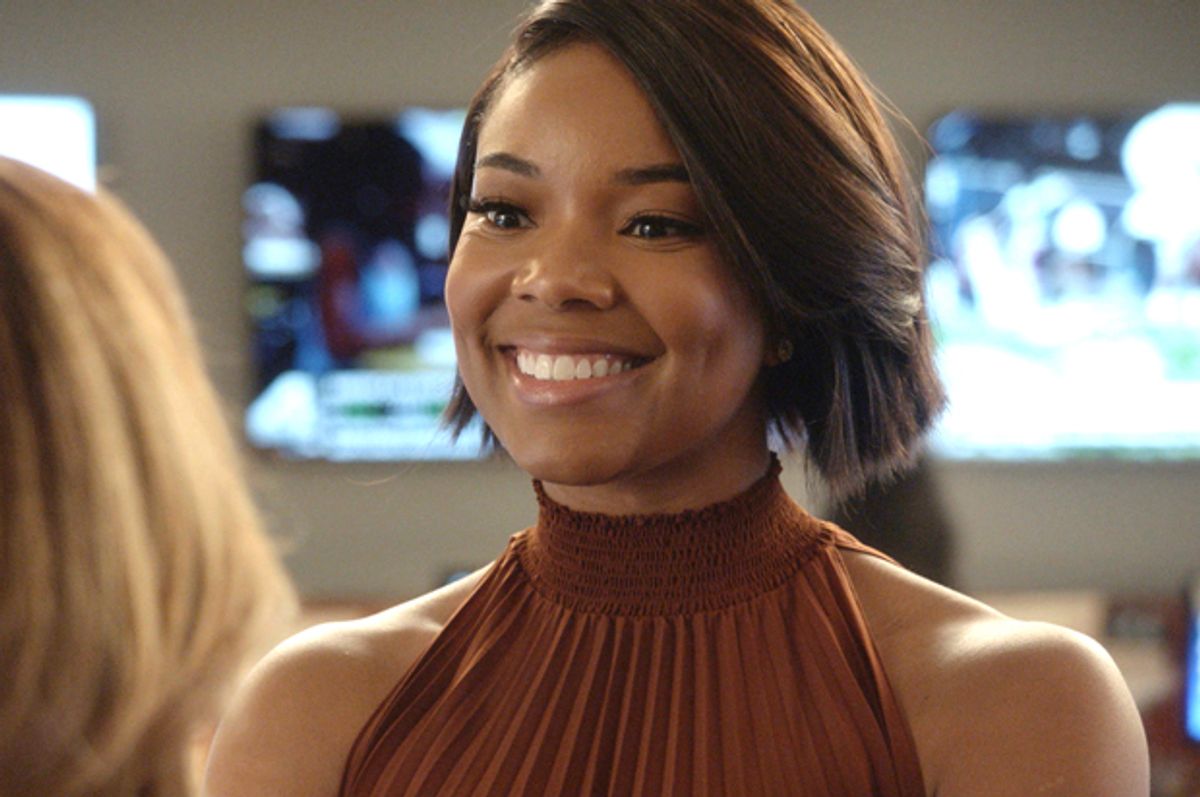 “Funny business, a woman's career — the things you drop on your way up the ladder so you can move faster. You forget you'll need them again when you get back to being a woman. That's one career all females have in common, whether we like it or not: being a woman. Sooner or later, we've got to work at it, no matter how many other careers we've had or wanted.”  Margo Channing, “All About Eve”

Over the years I’ve frequently recommended “All About Eve” to women navigating workplace politics. The occasion tends to arise when a seasoned colleague (like Bette Davis’ Margo Channing) realizes that the new kid, the one who smiles brightly, gushes with compliments and values her advice (a la Anne Baxter’s Eve Harrington) also happens to be gunning for her job.

The 1950 Oscar winner is set in the theater world, with Baxter’s Eve backstabbing her way into the fading career of her idol.  But the archetypes smoothly translate to any workplace situation, especially a 2017 talk show soundstage, the setting for BET’s “Being Mary Jane.”

This drama’s heroine, played by Gabrielle Union, isn’t aligned with Margo Channing’s archetype. Mary Jane Paul is definitely an Eve, and she’s a reminder that, whether she likes it or not, every ambitious career woman is somebody’s Eve at some time or another.

As its fourth season resumes, in an episode airing Tuesday at 10 p.m., Mary Jane is two months into her dream job as the new co-anchor of “Great Day USA,” the series’ fictional version of the Today Show. Last season she arrived from Atlanta as a correspondent and was so cautious in her excitement that she chose to live in her hotel. And Mary Jane was thrilled to meet the then co-anchor of “GDU,” Ronda Sales (Valarie Pettiford), who initially positioned herself as a mentor.

But the much older Ronda recognizes the threat Mary Jane poses immediately, and begins to quietly undermine Mary Jane at every turn. The senior anchor nearly succeeds, but is eventually undone by Mary Jane’s Machiavellian producer Justin Talbot (Michael Ealy), who sets the perfect trap for a comfortable, driven veteran TV journalist to fall into: He places a headline-grabbing story in her path but forgets to tell her it isn’t fully vetted. Ronda is gone before her new contract is signed, and Mary Jane slides right into her seat.

Now the challenge with being Mary Jane, an Eve for a new generation, is getting the audience to like her — something women in front of the camera have to worry about much more than men.

“All About Eve” was written by man, although Joseph Mankiewicz adapted his script from a short story by Mary Orr, which was published in a 1946 issue of Cosmopolitan. Orr did not receive screen credit, but the imperishability of her story’s message is telling.

Few environments resemble Orr’s Broadway piranha tank as closely as that of the news and talk world, an arena built by the male gaze, and run by and designed to favor men much more than the women who help sell it. The adversarial relationship between the Eves and Margos of the world would not exist if not for men.

And the harshness with which women in news and daytime is judged is legendary; ask Katie Couric, Kelly Ripa, Jane Pauley or Deborah Norville. The women of daytime, women like Mary Jane, are propped up to be judged  on the basis of image more than ability by an audience that skews female and by the men who hire them and work beside him.

“Being Mary Jane” touches upon this as management voices concerns over Mary Jane’s “Q Score” — the industry measurement of her audience appeal. Ronda’s departure resulted in a ratings tumble for “Great Day USA,” and for that, the new kid is taking the blame — not her older white co-anchor, who has power that Mary Jane doesn’t.

The audience has gotten to know Mary Jane Paul over four seasons, and she cuts a much more sympathetic figure than Baxter’s cold schemer ever did. But she has a few things in common with the younger archetype. Like Eve, Mary Jane remade herself from the ground up; her real name, Pauletta Patterson, is too local for a woman with national news ambition.

Only Mary Jane’s loving family refer to her by her birth name, and several subplots follow their struggles, allowing the main character to maintain a connection to her roots and “real” life.

She needs them, perhaps even more than before. Her best friend and longtime producer Kara (Lisa Vidal) was fired as part of the coup to oust Ronda. And the dethroned former “GDU” anchor has no intention of letting bygones be bygones. Landing her own talk show only seems to have magnified her bitterness.

But then, both she and Mary Jane made sacrifices their male co-workers and lovers never had to.  Mary Jane imploded a developing, solid relationship — something she’s thirsted for since the series began — by sleeping with Justin, the man responsible for getting her into her co-anchor slot. Mind you, he’s also the man who got Mary Jane fired from her previous job. (While watching this I could almost hear Davis’ Channing drunkenly cooing, “I hate men.”)

“Being Mary Jane” is a creation of Mara Brock Akil, one of the few African American women in Hollywood who has helmed several successful series about the lives of women, and black women in particular, including “Girlfriends” and its spinoff “The Game.” Brock Akil, and Union for that matter,  have plenty of experience with making it in a cutthroat industry built by and structured to favor men.

This comes through in the voice and actions of Union’s character, a savvy journalist (and something of a romantic) contending with the bitter either-or proposals laid out before career women.  Union's bright, assured performance and the show's incisive scripts make "Being Mary Jane" universally alluring as well as truthful to the specific experiences of black women. Throughout the series Mary Jane’s been made to answer for her success and aggressiveness in the workplace, qualities that make it difficult to find and keep the love she craves. And the quest for last love is exceedingly difficult for black women in high-powered positions. A matchmaker refuses to accept Mary Jane as a client, for example. Yet she had a shot last season, finding a supportive, devoted lover (Chiké Okonkwo) who was ready to have a child with her.

All of this was undone by the kiss planted on her by the male producer who handed her an anchor slot,  sealing a dubious bargain that's currently playing out.

Applying simple dualities to a woman’s identity is a losing game because nobody is either one thing or another, not even Margo Channing, a woman who likely got her break by employing Eve-like tactics. We see this at the end of the film, as Eve picks up a budding frenemy of her own.

Mary Jane deserves better, and despite her questionable choice in trustworthy co-workers, she may indeed get to “have it all.” This is the happy ending promised to the modern career woman, and watching her work to get to that place continues to be a worthwhile pursuit.

Note: This article has been updated since original publication.