Wall Street Journal hits Trump for bumbling the Russia scandal, calls on him to disclose everything

The Wall Street Journal has had it with Trump and suggests he releases everything, from phone calls to taxes 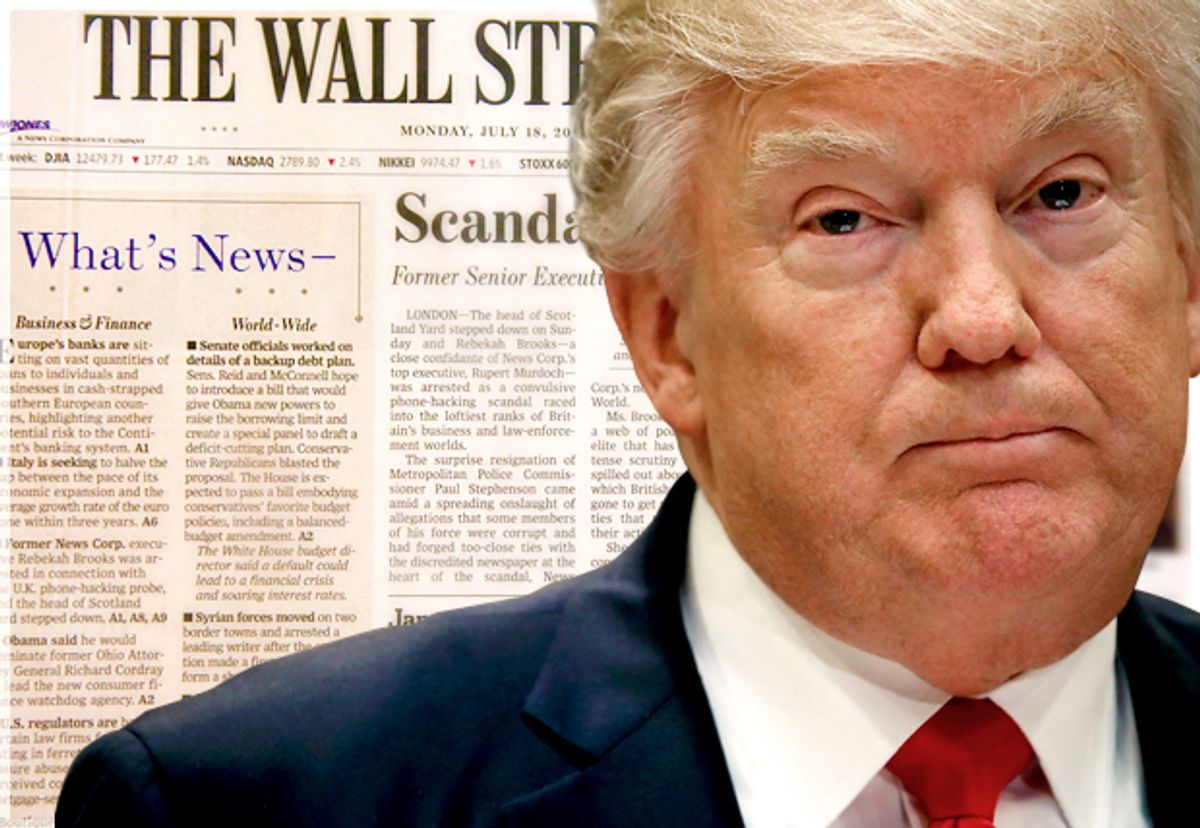 The Wall Street Journal's editorial board, a champion of American conservatism, is fed up with their Republican president. The Journal published a scathing editorial Tuesday criticizing the way in which President Donald Trump has handled Russia's election interference and the subsequent investigations that have followed.

"Even Donald Trump might agree that a major reason he won the 2016 election is because voters couldn’t abide Hillary Clinton’s legacy of scandal, deception and stonewalling," the piece started. "Yet on the story of Russia’s meddling in the 2016 election, Mr. Trump and his family are repeating the mistakes that doomed Mrs. Clinton."

From "fake news" to "nothingburger," the Trump White House has dismissed the Russia scandal as mere fantasy. But in the eyes of the Wall Street Journal, the Trump family cannot claim innocence when news report after news report continues to refute lie after lie.

The Journal focused on the latest story involving Donald Trump Jr. and the meeting he held with a Russian attorney during the campaign. The conservative paper laid out all the mistakes the president's son made while trying to manage the crisis.

"First Don Jr. let news of the meeting leak without getting ahead of it. Then the White House tried to explain it away as a “nothingburger” that focused on adoptions from Russia," the editorial board wrote. "When that was exposed as incomplete, Don Jr. released his emails that showed the Russian lure about Mrs. Clinton and Don Jr. all excited — 'I love it.'"

"Even if the ultimate truth of this tale is merely that Don Jr. is a political dunce who took a meeting that went nowhere — the best case — the Trumps made it appear as if they have something to hide," the articled added. "They have created the appearance of a conspiracy that on the evidence Don Jr. lacks the wit to concoct. And they handed their opponents another of the swords that by now could arm a Roman legion."

The paper noted that the president cannot just exculpate himself in the court of public opinion. Congressional committees and a special counsel have been conducting their own investigations.

"Everything that is potentially damaging to the Trumps will come out, one way or another. Everything," the board wrote. "Denouncing leaks as 'fake news' won’t wash as a counter-strategy beyond the President’s base, as Mr. Trump’s latest 36% approval rating shows."

The Journal then offered a suggestion that president could only laugh at in response.

"Release everything to the public ahead of the inevitable leaks," the board wrote. "Disclose every detail that might be relevant to the Russian investigations. That means every meeting with any Russian or any American with Russian business ties. Every phone call or email. And every Trump business relationship with Russians going back years. This should include every relevant part of Mr. Trump’s tax returns, which the President will resist but Mr. Mueller is sure to seek anyway."

The editorial board argued that full, immediate disclosure would cause less damage than the slow drip of reports coming from the media.

"If there really is nothing to the Russia collusion allegations, transparency will prove it. Americans will give Mr. Trump credit for trusting their ability to make a fair judgment. Pre-emptive disclosure is the only chance to contain the political harm from future revelations," the article said.

The Journal warned that if Trump's approval rating stays below 40 percent, then all Republicans will suffer the consequences, likely leading to a win for Democrats in the House, which would only lead to more intense investigations.

"Impeachment will be a constant undercurrent if not an active threat. His supporters will become demoralized," the board predicted.

"Mr. Trump somehow seems to believe that his outsize personality and social-media following make him larger than the Presidency. He’s wrong. He and his family seem oblivious to the brutal realities of Washington politics. Those realities will destroy Mr. Trump, his family and their business reputation unless they change their strategy toward the Russia probe. They don’t have much more time to do it," the Journal concluded.