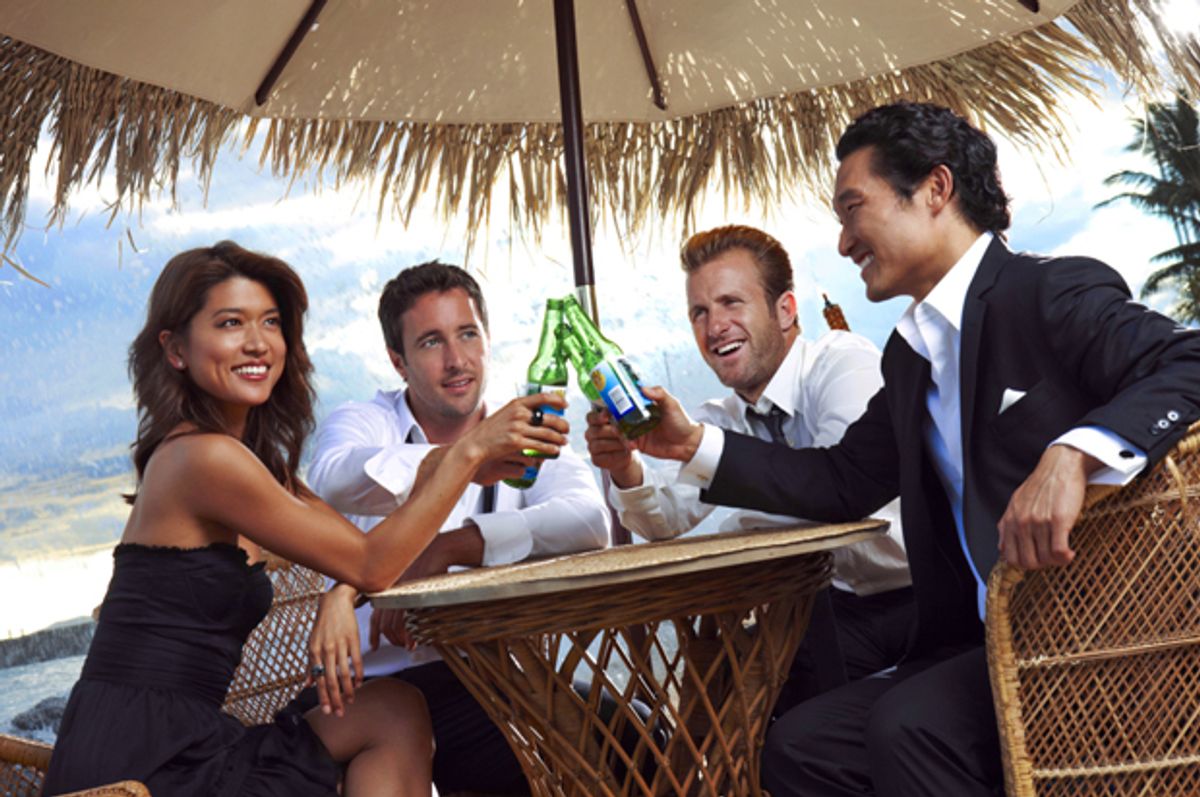 Network television diversity math sure can be interesting. Take this story problem as an example: Two Asian actors, Daniel Dae Kim and Grace Park, leave a hit TV show, “Hawaii Five-0,” after seven seasons because the network, CBS, refused to pay them the same salary as their white male co-stars, Alex O’Loughlin and Scott Caan.

Reliable sources say Kim was brought within two percent of salary parity, offered around $195,000 an episode — $5000 less than O’Loughlin and Caan — even though Kim appears in more episodes than Caan, bill as one of the drama’s white male leads.

Park was offered less per episode than Kim, according to reports, but also wanted to work fewer episodes and be written off of the series.

According to Deadline three actors are joining the series, CBS announced on Wednesday. Two of them are biracial; one, Ian Anthony Dale, is the son of a Japanese woman, the other, Meaghan Rath has an Indian mother. The third, Beulah Koale, is New Zealand-born actor of Samoan decent. Bear in mind that all of them are relatively unknown in comparison to Kim and Park, although Dale’s character Adam Noshimuri has been recurring since season 2, and is the husband of Park’s character Kono Kalakaua.

Syfy viewers may recognize Rath as one of the stars of “Being Human.” She’ll play Tani Rey who, according to a CBS press release, is recruited by O’Loughlin’s character McGarrett “after finding her working as a lifeguard at a hotel pool after she was kicked out of the Police Academy, despite being a first-rate candidate.”

Koale’s role, Junior Reigns, is a former Navy SEAL who “just returned from serving his country and asks McGarrett, a fellow SEAL, for a job, hoping to repurpose his skills as a member of Five-0.”

As the newest cast members of “Hawaii Five-0,” the trio will not only be paid less than Kim and Park, who left at a time in the show’s run at which actors generally negotiate significant pay raises, they’ll be making far less than the show’s white leads, who not only scored pay bumps but get points on the back end, meaning they’ll receive a cut of the show’s long term profits.

To provide a sense of how lucrative that aspect of their contracts are, a Los Angeles Time article that ran in February stated that the company revealed at a conference held in 2016 that the show generates $3.5 million per episode just from purchases by international broadcasters.

Who wins here? And, does this balance the scales? Answering the second question is easy – of course it doesn’t. In “Hawaii Five-0,” the minority actors and characters are and have always been part of the scenery instead of meaningfully integrated into the main action.

The action plots hinge upon the buddy cop chemistry between O’Loughlin and Caan, whose lead status is part of the network’s conscious design to cater to a Friday night audience that skews white and has a median age of 63. (The general broadcast primetime audience has a median age of 55.)  As such, the series fits in with CBS’ Friday night line-up, where it’s nestled in the 9 p.m. timeslot between “MacGyver” and “Blue Bloods.”

“Hawaii Five-O” also co-stars Chi McBride and Jorge Garcia who, along with Dale, Rath and Koale, contribute to the show’s efforts to reflect the state’s ethnic diversity. For the record, the census states that 57.4 percent of the state’s population has some Asian heritage. Koale may represent the 9.4 percent of the population that identifies as Pacific Islander. McBride, meanwhile, is holding it down for 1.5 percent of Hawaiians who checked the African American box on the survey.

As for that first question — who wins? — that’s a trickier one. The upside is that three minority actors scored regular roles on a top-rated series, which stands to provide a career boost for, well, at least one of them if not all. Dale is currently co-starring in the network’s summertime series “Salvation,” and if the weak ratings its premiere are an indicator, that probably won’t be taking up anyone’s time after the season ends.

Koale is set to appear in a movie with Miles Teller, “Thank You for Your Service,” which premieres in October. And since his character is an ex-SEAL, who knows? CBS is launching a new military drama, “SEAL Team,” in September. There could be crossover potential  with his character — and this is pure, blue-skies speculation based on nothing, by the way.

Then again, McGarrett also is a former SEAL, and given this network’s track record of favoring one kind of actor over others, if such an opportunity comes into play . . . let’s just say it’s fairly easy to predict how the network would solve for X in that situation.