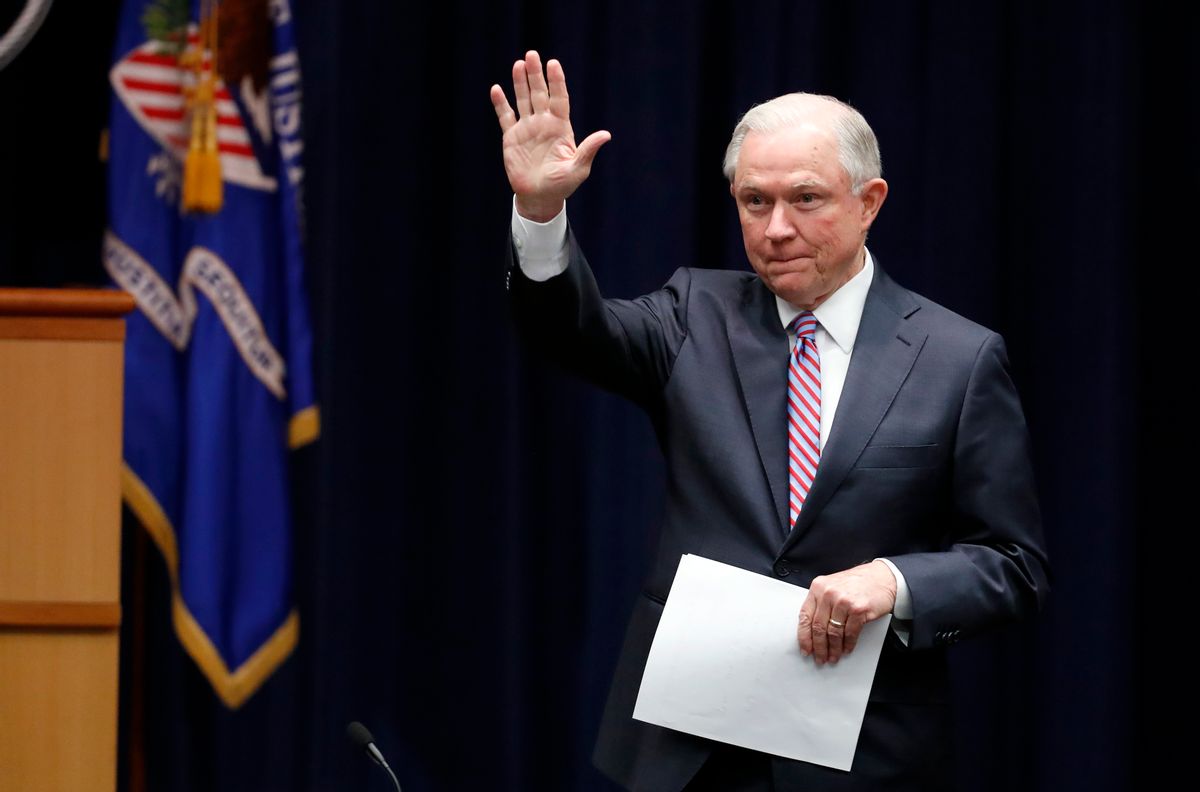 In a memo to the Justice Department, Sessions issued an order that authorized "federal adoption of all types of assets seized lawfully by state or local law enforcement under their respective state laws . . . whenever the conduct giving rise to the seizures violates federal law."

Sessions said Monday that the policy was designed to curb the drug trade.

"We hope to issue this week a new directive on asset forfeiture — especially for drug traffickers. With care and professionalism, we plan to develop policies to increase forfeitures," Sessions said in prepared remarks before the National District Attorneys Association. "No criminal should be allowed to keep the proceeds of their crime. Adoptive forfeitures are appropriate as is sharing with our partners," he continued.

But large controversy surrounds the practice of asset forfeiture, a practice which is problematic and "allows law enforcement officials to permanently take money and goods from individuals suspected of crime," the Washington Post reported.

There is little disagreement among lawmakers, authorities and criminal justice reformers that “no criminal should be allowed to keep the proceeds of their crime.” But in many cases, neither a criminal conviction nor even a criminal charge is necessary — under forfeiture laws in most states and at the federal level, mere suspicion of wrongdoing is enough to allow police to seize items permanently.

In the past police officers have kept cash because state law allows them to, the Post reported, creating a an incentive for profit. "In 2014, federal law enforcement officers took more property from citizens than burglars did." Millions more were taken by state and local authorities.

Sessions has made it will known that he intended to crack down on crime when he assumed the lead position in the Justice Department, a reversal of some Obama-era policies. Former Attorney General Eric Holder "essentially abandoned the forfeiture practice in 2015, amid complaints that it was prone to abuse and encouraged police departments to carry out seizures in order to win more funds to buy equipment and vehicles," according to Politico. "Holder allowed a heavily restricted version of the program to resume last year."

Holder's impact on the federal level as a whole was minimal in reality, according to the Post. Holder only focused on "adoptive" forfeiture, a smaller subset of the problem, but one of the most corrupt aspects. The "adoptive" forfeitures made it possible for state and local authorities to "sidestep sometimes stricter state laws, processing forfeiture cases under the more permissive federal statute," according to the Post.

Adoption cases have minimal federal involvement. They are cases in which a local police agency simply calls up a field office of the Drug Enforcement Administration, the Bureau of Alcohol, Tobacco, Firearms and Explosives or other federal law enforcement agency to sign some papers so that the case gets kicked up to federal court, where it will be governed by the less restrictive federal forfeiture laws.

"This is a federalism issue," Robert Everett Johnson, an attorney for the Institute for Justice, a public interest law firm that represents forfeiture defendants, told the Post. Returning to federal adoptive forfeitures would "circumvent limitations on civil forfeiture that are imposed by state legislatures . . . the Department of Justice is saying 'we're going to help state and local law enforcement to get around those reforms.'"

Officials have said, however, that Sessions is requiring "new safeguards that will make it more difficult to conduct seizures of less than $10,000 and will require more information from local officials about the basis for a seizure when no criminal charges were filed," Politico reported.

But Sessions also noted he intends on expanding the "adoptive" forfeitures, saying the practice is "appropriate as is sharing with our partners."

States have made recent attempts to rein in the practice of asset forfeiture. "Thirteen states now allow forfeiture only in cases where there's been a criminal conviction," Johnson told the Post.

The issue has oddly united both liberals and conservatives, specifically those who lean libertarian. Rep. Darrell Issa, R-Calif.,said he was afraid that expanding the "adoptive" forfeitures would undermine the attempts states have made to rein in the entire practice.

"This is a troubling decision for the due process protections afforded to us under the Fourth Amendment as well as the growing consensus we’ve seen nationwide on this issue," Issa told Politico.

"Ramping up adoptive forfeitures would circumvent much of the progress state legislatures have made to curb forfeiture abuse and expand a loophole that’s become a central point of contention nationwide. Criminals shouldn’t be able to keep the proceeds of their crime, but innocent Americans shouldn’t lose their right to due process, or their private property rights, in order to make that happen."

Lee was joined by a surprising number of conservatives, who blasted the government's overreach.