See Caitlyn Jenner call out Jimmy Kimmel on his transphobia

During a taping of "Jimmy Kimmel Live!" the trans reality took the comedian to task for his past comments 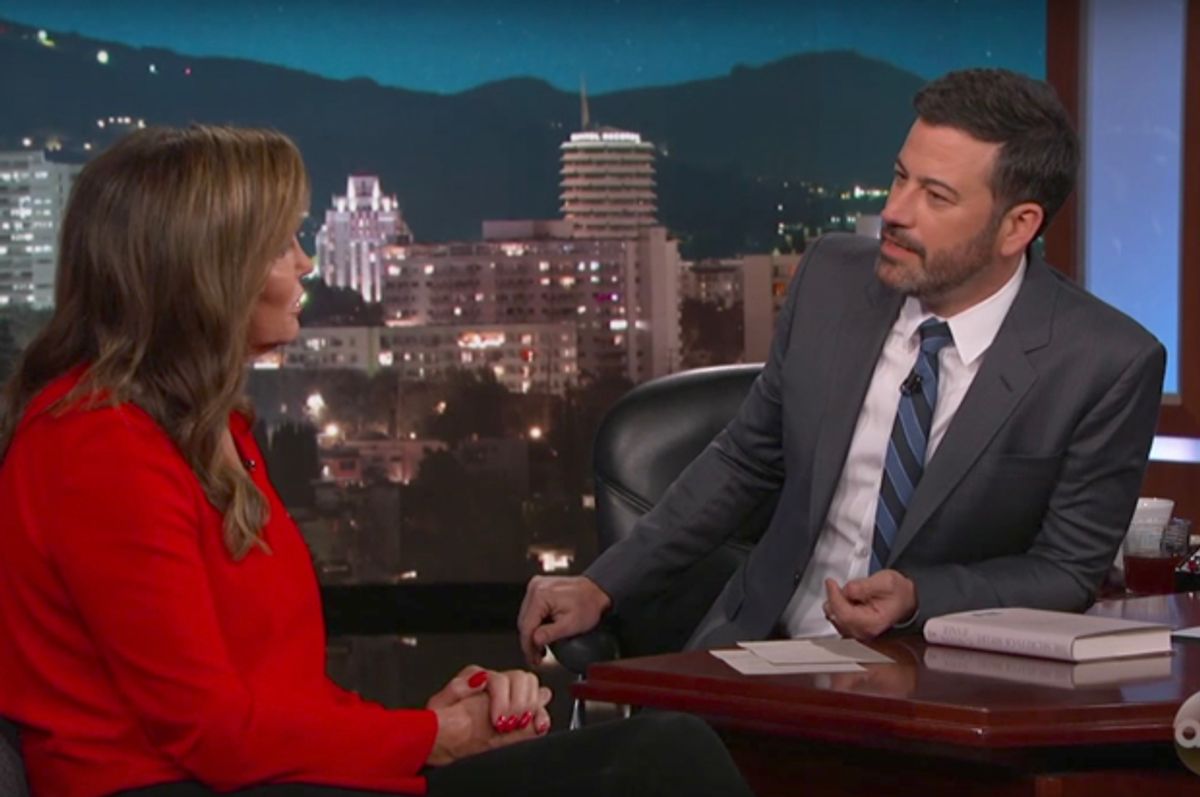 Before Caitlyn Jenner announced her gender transition — and her switch away from her previous identity of  Bruce Jenner — comedians and, yes, people just like you, made a minor sport of ripping on the "Keeping Up With the Kardashians" star about her hair choices, plastic surgery and general comportment. The reputedly hilarious joke was that Bruce seemed to be on the verge of some sort of movement away from manhood to womanhood. It wasn't that funny, but it was a regular source of mirth for some.

Thing is, that joke was very much the reality of the case: Jenner did, bit by bit, establish her true gender and become a "she" rather than a "he".

Suddenly, the transphobia of those initial jokes doubled up on itself — the very thing people were laughing at Jenner for was the very thing that, in many ways, set her free. If late-night comedians and jokesters on all levels weren't at least a little embarrassed when Caitlyn revealed herself to the world in a 2015 Vanity Fair interview, they should have been.

All of that, and more, surfaced once again last night when Jenner visited the set of "Jimmy Kimmel Live!" for the first time. In an on-air interview with host Jimmy Kimmel, the two briefly touched on the matter, Kimmel's former propensity to make jokes at "Bruce" Jenner's expense in particular.

After speaking about the overlap between her faith and her transgender identity, she talked about coming out to her children because questions about her gender had been, "hammered all over the media."

Pausing, she added, "in fact, guys like you..." Kimmel laughed nervously. Jenner went on, "...making some jokes...?" leaning into the host, suggesting his past behavior had been less than laudable.

"Well, we didn't know what was happening," said Kimmel. "We thought you were just vain."

"I know," said Jenner. "We didn't know what was going on," the host repeated. "Sorry about that, by the way." With charm, Jenner responded, "No, it's quite alright," then turned to the audience humorously, "Now he's gonna apologize." She turned back to Kimmel, "I accept your apology."

The two then talked about Jenner's similar appearance on "The Late Show with Jimmy Fallon" — one that was far more testy and confrontational.

All in all, it's a small moment, but an important one. Yes, Kimmel doesn't seem to quite understand what he did wrong in the first place (vanity and feminization are exactly the same thing, are they and who was he to demanding what was "going on" with Jenner?). But, look, in this world, a halfway decent apology with a warm acceptance is at least a strong step forward.

More than anything, the clip shows just how far Jenner has gone from a distant, awkward man to a funny, charming and actually quite personally graceful woman. She's able to pick up the negativity sent her way and channel it into something that could be possibly useful for people of transgender experience.

See the full segment below.