Bannon's back in the news as the subject of a bestselling book. Here's one key to understanding what makes him tick 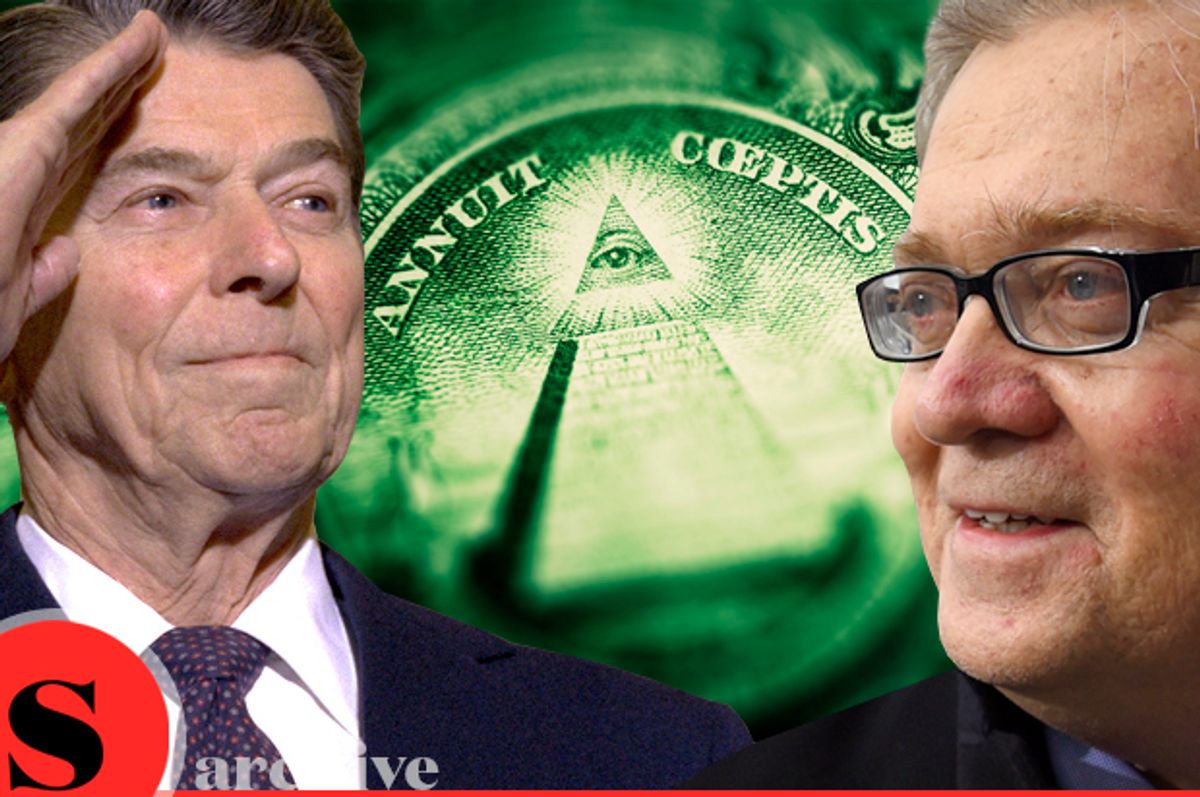 Steve Bannon is back in the news. In its first day on sale, a narrative of his role in Donald Trump's presidential campaign, Joshua Green's "Devil's Bargain," has hit number one in book sales on Amazon. We’re republishing this story from April which highlights a unique aspect of Bannon’s political life, one not found in that of any other influential American political figure today. Bannon does not shy from his associations with the mystical; when the piece first appeared, he even responded positively to the author — allowing never a predictable moment.

When my book “Occult America,” a history of supernatural religions in the U.S., appeared in 2009, I was surprised to receive an admiring phone call from a conservative documentarian and financier. He professed deep interest in the book’s themes, and encouraged me in my next work, “One Simple Idea,” an exploration of positive-mind metaphysics in American life. His name was Stephen K. Bannon.

Although the media have characterized Bannon as the Disraeli of the dark side following his rise to power in the Trump administration, I knew him, and still do, as a deeply read and erudite observer of the American religious scene, with a keen appetite for mystical thought.

Ronald Reagan, a hero of his, was not dissimilar. As I’ve written in the Washington Post and elsewhere, Reagan, from the start of his political career in the 1950s up through the first term of his presidency, adopted phrasing and ideas from the writings of a Los Angeles-based occult scholar named Manly P. Hall (1901-1990), whose 1928 encyclopedia arcana “The Secret Teachings of All Ages” is among the most influential underground books in American culture.

President Trump himself has admiringly recalled his lessons in the mystic art of “positive thinking” from the Rev. Norman Vincent Peale, the Trump family’s longtime pastor, who popularized metaphysical mind-power themes in his 1952 mega-seller “The Power of Positive Thinking.”

What in the cosmos is going on? New Age and alternative spirituality are supposed to be the domain of patchouli-scented aisles of health food stores and bookshops that sell candles and pendulums, right? Well, not exactly.

There is a long-standing intersection between mysticism and conservatism in America. This marriage extends back to the late 19th century when globetrotting occultist and Russian noblewoman Madame H.P. Blavatsky depicted America as the catalyst for a revolution in human potential in her 1888 opus “The Secret Doctrine.” “It is in America that the transformation will take place,” Blavatsky wrote, “and has already silently commenced.”

Generations of occult writers echoed Blavatsky’s theme of America as a Holy Grail among nations, possessed of a “secret destiny,” as Manly P. Hall put it, and thus married esoteric spirituality to patriotic ideals. This partnership has flourished out of view of most mainstream observers—and significantly impacted American culture, including the look of our currency.

In 1935, then-Secretary of Agriculture Henry A. Wallace, a former Republican and mystical seeker who went on to become Franklin Roosevelt’s second vice president, approached FDR with a novel idea: mint a coin with the mysterious reverse side of the Great Seal of the United States—the eye-and-pyramid surrounded by the Latin maxim “God Smiles on Our New Order of the Ages.” Both men were Freemasons with a taste for portentous imagery—and were on the lookout for epic, unifying symbols for the recovering nation. (Wallace had spoken of the need for a “New Deal of the Ages.”) Roosevelt was so taken with the 1782 image, with its Masonic undertones and message that worldly achievement is incomplete without higher ethics, that he personally supervised its installation on the back of the dollar bill, making a previously arcane insignia into an indelible symbol of the republic.

President George H.W. Bush brought new attention — and unintended infamy — to the concept of a “New World Order.” In his Sept. 11, 1990, speech to a joint session of Congress, Bush sought to celebrate the possibilities of international trade and cooperation that could follow a swift victory in the first Gulf War: “Out of these troubled times, our fifth objective—a new world order—can emerge … An era in which the nations of the world, East and West, North and South, can prosper and live in harmony.” Little was he aware that his use of the term would inspire a generation of conspiracy theorists to notions of a hidden, sinister global plan.

Conservative metaphysics extend beyond geopolitics. One of Richard Nixon’s confidants — in addition to the Rev. Peale, whose church he also attended—was insurance magnate W. Clement Stone, a right-wing activist, benefactor of the famous ESP lab at Duke University, and collaborator to Napoleon Hill, author of the mind-metaphysics classic “Think and Grow Rich.”

Most liberals and centrists find these kinds of associations jarring and a bit creepy. Thoughtful people are suspicious of mixing Rasputin-like intrigue with American politics. And with good reason. As Vice President Dan Quayle once put it—and he was specifically referring to Rasputin — “people that are really very weird can get into sensitive positions and have a tremendous impact on history.” (It should be noted, however, that the “mad monk” soberly cautioned the tsar against getting entangled in World War I.)

Critics fear that a sense of spiritual preordainment can produce reckless or dangerous policy choices. Yet such episodes in American history have traditionally had less to do with religious impulses than the kinds of hubris that once drove “the best and the brightest” into Vietnam, or moved senators from both parties to support President George W. Bush’s tragic rush into Iraq, based on the cynical calculus that a quick and tidy war would net a political victory.

Rather than fomenting secrecy or subterfuge, America’s embrace of esotericism is often characterized by a chin-out earnestness, something that many observers and conspiracy-mongers miss. “You can call it mysticism if you want to,” Reagan told the Conservative Political Action Conference in 1974, “but I have always believed that there was some divine plan that placed this great continent between two oceans to be sought out by those who were possessed of an abiding love of freedom and a special kind of courage.” In announcing his candidacy in 1979, Reagan declared: “To me our country is a living, breathing presence, unimpressed by what others say is impossible . . . and that man is capable of improving his circumstances beyond what we are told is fact.” Reagan often returned to such themes, echoing Hall’s 1944 book “The Secret Destiny of America.”

This rhetoric may sound flighty, but that, too, is part of our heritage. Historically, I prefer the cadences of offbeat idealism to the rampant ugliness of our current president’s Twitter insults, or the low-octane, visionless speechmaking that burdened Hillary Clinton’s campaign.

Conservative presidencies have not cornered the market on the otherworldly. During the 2016 campaign, I was surprised that no one revisited an episode from Bill Clinton’s first term, when then first lady Hillary Clinton was accused of holding “séances” in the White House—a term misapplied to her visioning sessions with New Age teacher Jean Houston, a pioneer of the human-potential movement. Houston, whom I’ve published, didn’t quite know how to explain to reporters that when she guided the first lady in dialogues with her political hero Eleanor Roosevelt, they were not summoning spirits but rather conducting creativity and value-defining exercises. President Clinton was cool toward these tête-à-têtes. Houston told me that the president once sat in on one of their sessions. When the guru told him he was an “undeveloped shaman,” he stood up and left the room.

Bill Clinton took a similarly dim view of parapsychology. During a period of post-Cold War cost cutting in 1995, he eliminated the CIA’s budget for its psychic-spying program. Jimmy Carter, by contrast, admired the “remote viewing” operation. The year of Clinton’s cuts, Carter told a group of Emory University students that during his presidency, clairvoyant spies helped identify the coordinates of a crashed Soviet spy plane in Central Africa, netting a significant intelligence gain.

Off-the-grid practices should come as no surprise to students of politics. People in power always import values, customs and attitudes from their backgrounds—sometimes the religious conservatism of a Mike Pence and other times the Southern Californian vibes of a Ron and Nancy Reagan, with their enthusiasm for astrology, psychics and UFOs (Reagan reported sightings as both an actor and governor). Reagan alone was at ease swapping stories with New Age neighbors at Hollywood pool parties, while simultaneously maintaining a sincere, and mutual, affection for evangelicals. He was the model American religionist.

Even conservative evangelicals today borrow from American mysticism. When Pat Robertson speaks of the “Law of Reciprocity” (did you miss that in Scripture?) he is reprocessing the “Law of Attraction,” a concept popularized by the book and movie “The Secret,” but rooted in an American mystical tradition extending back to 1854, when a spirit medium named Andrew Jackson Davis coined the term.

Davis’ career illuminates how historically deep these entanglements go. Called the “Poughkeepsie Seer” for his Hudson Valley, New York, hometown, Davis was naturally controversial—with one prominent defender, who attested that his channeled trances were an authentic telegraph to the spirit world. The medium’s advocate was a Rev. George Bush, a first cousin, four times removed, to the Bush presidential family. The Rev. Bush caused a stir in 1845 by leaving the Presbyterian Church to become a minister in the Church of the New Jerusalem, an ecclesiastical body based on the ideas of Swedish mystic-scientist Emanuel Swedenborg. Bush wrote admiringly of Davis, and attended his séances (a term Davis also coined in its occult sense) along with a dubious journalist named Edgar Allan Poe.

Today, cable television producers and radio hosts often urge me to postulate some kind of occult “pact” between the Bushes and the dark side (cue up Skull and Bones). But such things are fantasy. The truth is, Americans have always been, well, a little strange. As a historian, I feel affection for that aspect of American life. Shadowy figures have long hung around the fringes of power in many nations; but rarely have they done so with the ingenuousness and transparency of those I’ve been considering.

If there is a central principle in American life, one valued across our political spectrum, it is a belief in the protection of the individual search for meaning. The presence and persistence of esoteric and unusual religious ideas in our political culture, including in its most conservative quarters, serves as evidence that that core principle is still working. In the U.S. military, religiously observant service members and veterans can now choose among more than 65 “emblems of belief,” including pentagrams, druidic symbols and every variety of mystical insignia. We are truly one nation under many gods — a fact that unites us across our fractured political divide.