Taking heed of the women on "Game of Thrones" 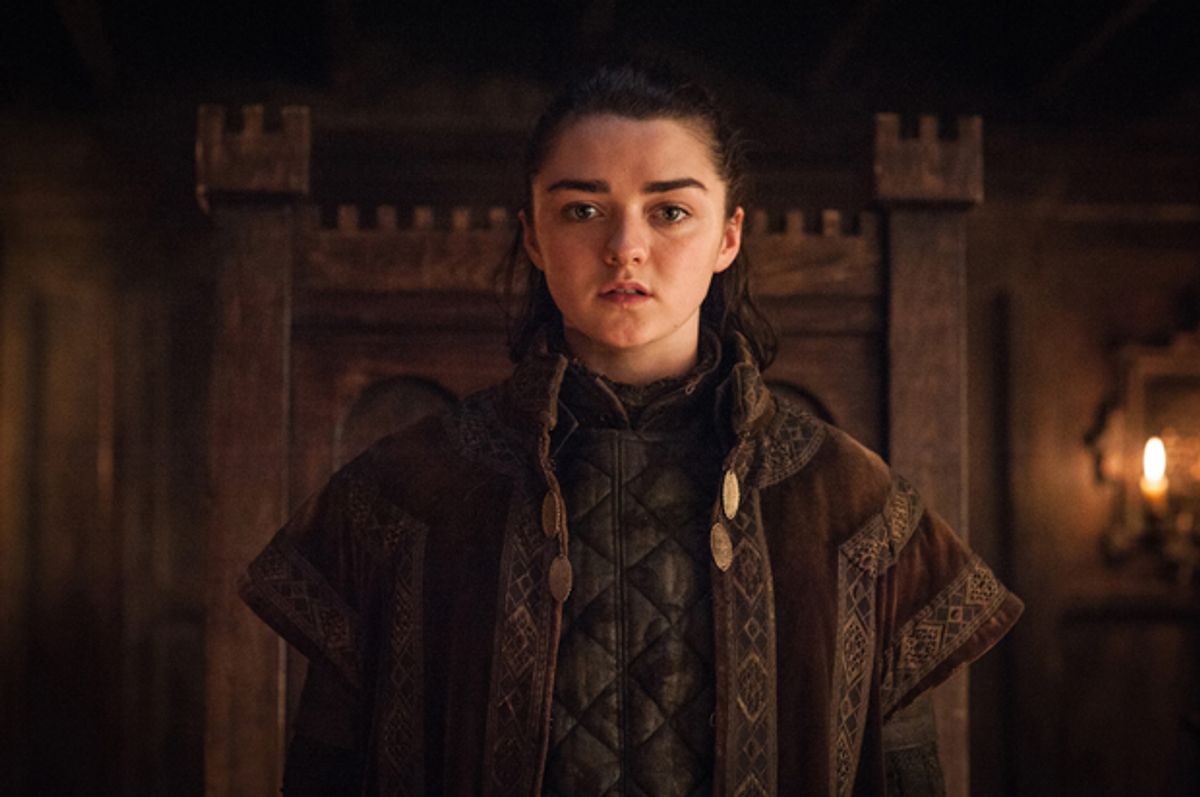 Much of the discussion taking place in the aftermath of the seventh season premiere of “Game of Thrones” surrounds the discussion of Ed Sheeran’s cameo and whether the scene in which Sheeran pops up has a purpose. The overwhelming opinion is that it was superfluous and unnecessary.

However, I believe that sequence does have a purpose. A couple, actually. But a person would have to view that scene, in which Arya Stark (Maisie Williams) encounters a group of Lannister soldiers sitting around a campfire, in the larger context of the episode titled “Dragonstone.”

She’s wary of them for obvious reasons; the Starks declared war on the Lannisters, and the Lannisters orchestrated the deaths of Arya’s mother Catelyn and brother Robb in one of the bloodiest betrayals Westeros has ever seen.

On top of that, Arya’s travels have taught her that terrible things happen around campfires.

But these men are not Lannisters, just poor sons and husbands of other poor people who need to support their families. They invite her over to warm herself by the flames. One offers Arya the first bite of a roasted rabbit on a spit, the only meat the group has. She politely declines, pointing out that there isn’t even enough for all of them. But they insist. “My mother always told me to be kind to strangers, and strangers will be kind to you,” one says.

Another relates that his wife just gave birth to his first child. He doesn’t know the gender, he says, but offers that he hopes it’s a girl.  “Girls take care of their papas when their papas grow old,” he opines. “Boys just go off to fight in someone else’s wars.”

And when that kindly young man asks Arya why a “nice little girl” is traveling on her own, Arya takes a sip of blackberry booze and boldly answers, “I’m going to kill the queen.”

These men barely beyond boyhood are in the area because of Arya wiped out an entire family line – all of the Freys – with one cask of decent wine. That makes her one of the most dangerous people in Westeros as well as one of the land's most sought bounties. And how do they react to this little girl’s declared intent to commit regicide? They pause for a shocked moment — and then laugh in her face.

“Game of Thrones” has long treated women as objects and pawns in its scripts, but this episode written by series executive producers D.B. Weiss and David Benioff depicts a fatal blindspot common to the men of his world: They do not take its women seriously. Never have.

And in this scene we see, on a micro level, how much male ignorance is to their own peril. Arya is armed; a quick glance at the group’s swords messily piled together nearby tells us that if tensions flared, she could take out the group without much fuss. But she chooses to laugh along with them. They’re such small prey; she has bigger game to hunt.

Westeros needs its women. Problem is, Westerosi culture has a longstanding habit of dismissing females, even those in power.

To the North, Jon Snow (Kit Harington) gets it, in a sense. He learned from the Wildling Ygritte, a woman who asserted her agency throughout their relationship and fought beside men in the battles North of the Wall. It is likely because of Ygritte's demonstrated capabilities that Jon points out to the liege lords gathered at Winterfell that the threat of the White Walker horde requires all able-bodied Northerners between 10 and 60 to train for battle, women as well as men. Lord Glover is horrified. “You expect me to put a spear in my granddaughter’s hand?”

Maybe he has a point. Just look at Dorne, where the women lead armies, and the Martells have been usurped by the bastard lover of the late Oberyn Martell and his illegitimate daughters, all of them Sands.

The select ladies at the top of the social structure in “Game of Thrones” have shown the lasting effects of misogynistic folly since the start of the series, and even in its pre-history. For Robert’s Rebellion would not have happened at all, if not for Rhaegar Targaryen taking Lyanna Stark as his lover.  Who knows if she confessed her secret love to Ned? If she had, that might have saved everyone a lot of trouble.

What we do know from the series is that the lords of Robert Baratheon’s small council waved away news of Daenerys Targaryen’s survival in Essos, shrugging when an attempt to poison her fails, because what harm does a motherless penniless baby girl pose to their great kingdom? When her brother Viserys still lived, he treats her like a punching bag and sexual currency. For what else are women good for?

Now the land receives the answers to both those questions in the form of Daenerys’s fleet landing at Dragonstone — a fleet whose ships sail under the command, we should add, of Yara Greyjoy (Gemma Whelan), another dismissed daughter of a terrible father.

Daenerys, Yara, Arya and Brienne of Tarth (Gwendoline Christie) are models of what the defiance of prescribed gender and social roles might yield. Brienne chose to master and live by the codes of chivalry even though she’ll never be knighted, and like her, Arya desired to master the sword instead of practicing her needlepoint. Both women evolved into formidable combatants in service of justice.

Cersei Lannister (Lena Headey) is quite the deadly force as well. She’s also the ultimate worst-case scenario of what happens when a relentlessly ambitious woman is thwarted at every turn. Cersei sits on the Iron Throne, something she yearns for with such intensity that she sacrifices the lives of her children to get there. As Cersei points out to her brother Jaime (Nikolaj Coster-Waldau), she was the one who listened to their father Tywin’s history lessons more closely than others.

Tywin (Charles Dance) never trusted Cersei because, as he explained to her, “you're not as smart as you think you are.” He was wrong, as we know. If Cersei weren’t one of the sharpest knives in the realm, she’d be wearing a potato sack and bowed before the High Sparrow. Instead, like Arya, she took out all of her enemies and left the commoners terrified of crossing her, all in a single towering blaze.

Unfortunately Tywin never taught his daughter how to govern, and she learned how to conquer by his example as opposed to his nuanced tutelage. Tywin believed his daughter’s role was to secure power and alliance through marriage, because that is what highborn women are for. The late Lannister patriarch failed to consider nobler uses for his daughter’s abilities and honor her devotion. Now all of the Seven Kingdoms stand to pay for it — even the North.

Sansa learned a pile of lessons at Cersei’s knee, watching in silent terror as the queen coddled her sociopath of a son Joffrey and orchestrated an assortment of machinations that resulted in the deaths of her father, mother and oldest brother. When she questions Jon’s decision to forgive the Houses that betrayed the Starks, she does so because she finally has a seat at the table and a voice in the debate. Moreover, her opinion that loyalty should be rewarded isn’t wrong; it isn’t politically wise, either.

But she’s never been put in such a position before — not by her father, who never wanted his girls to see how dirty the world is. Not by the Lannisters, or Petyr Baelish (Aiden Gillen), who has manipulated her to forward his own schemes and continues to think he can take advantage of her now.

And Jon questions whether he should accept her counsel even now — after he warned him about his enemies tactics before the Battle of the Bastards, a skirmish he would have lost without her. When she pleads with Jon to exercise more savvy than Ned and Robb, Jon retorts, “And how should I be smarter? By listening to you?”

“Would that be so terrible?” Sansa replies, in a small voice. Maybe she should emulate Lyanna Mormont (Bella Ramsey) and speak up, but this probably goes against her etiquette training.

After Glover’s incredulous response to Jon’s order that women be trained to fight, the diminutive Lady of Bear Island stands and loudly declares, “I don’t plan on knitting by the fire while men fight for me. I might be small, Lord Glover, and I might be a girl, but I am every bit as much a Northerner as you. And I don’t need your permission to defend the North.”

Lyanna Mormont was raised to know a woman’s worth by her mother, a great warrior. Her example is one that viewers can be hopeful about, because like Arya, she’s a little girl in a land dominated by tall and doughty men. But she has such a fearsome presence that her age, height and gender don’t matter. The lords needs Bear Island and its lady, and she’s schooled them enough that they know the score. Only a fool would not take her seriously. The North remembers. The rest of the kingdom would do well to learn.